Pardes, the new commission by Jyll Bradley for the Fruitmarket Gallery in Edinburgh, is not just a sculptural installation but the creation of an inclusive space for public interaction and events. As such, it follows on from her public commissions Green/Light (for M.R.), for The Folkestone Triennial (2014) and Dutch/Light for Turner Contemporary (2017), which used the generative structures of hop gardens and glasshouses to express the practical, spiritual and emotional work involved in growing a sense of self, place or community. For the most part, Pardes will host others, but one of those events will be the screening of Bradley’s new film M.R., 2021, which links the communal spirit of Green/Light (for M.R.) to her own life story.

PCK: In your new film, M.R., we see your sculpture Green/Light (for M.R.). That work adopts structures from the hop industry, recalled from your childhood in rural Kent. We hear a personal narrative about your adoption. How do sound and vision connect? 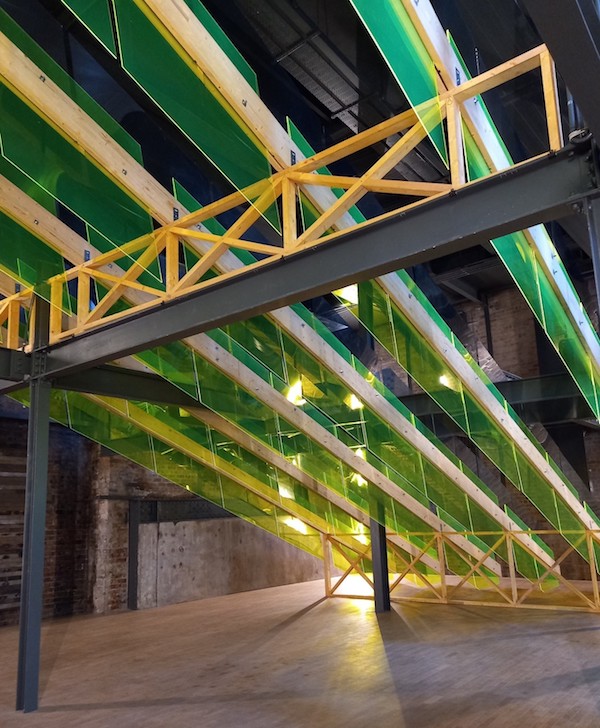 JB: The visuals are juxtaposed with the narrative, effectively using the sculpture as a giant camera – both into the past and reflecting the world around it. The sculpture is dedicated to my birth mother (M.R.), so it becomes a means of looking at my own history through something I’ve made. I love how sculpture can become a social phenomenon – you make the work and then you learn how it operates in the world – and I spent a lot of time hanging about the sculpture and watching how other people reacted to it. My film is autobiographical, but it is also the portrait of an artwork. I wanted to show that Green/Light (for M.R.) isn’t the static thing you might expect, but open and reflexive: it reacts with light; the natural world evolves in and around it. It has a private life; like us, it has good days and bad days.

PCK: The film follows your younger self searching for identity both as a person and an artist. That use of the sculpture as a seeing device resonates with the revelation that you developed a sight problem while studying at the Slade. What happened?

JB: I woke up one morning at 24, and my left eye was full of ‘floaters’. It seems that, while I was in the womb, my mum ate something raw with the parasite toxoplasmosis in it, a creature that dies but leaves dead cells floating around. For some reason, it erupted then, rather than in childhood as is usual. There’s no cure, and you can go blind. I’m always aware of it, though I have learned to live with it. So it’s something I have got from my birth mother that I relate to sight and insight of all types. The ‘eruption’ was the catalyst for looking for her.

PCK: What triggered you to write diary entries exploring the experience of adoption, and your quote from those. There are some striking statements about adoptees, for example, ‘we were not chosen, we were available’ and ‘we walk with an invisible twin – the life we didn’t lead’…

JB: You never get over the combination of how you are always told you were chosen, but on the other hand, you feel you were abandoned. I’ve seen it explored in literature – Jackie Kay’s The Adoption Papers is wonderful – but not in art. I grew up in the ’60s-’70s under a particular system – closed adoption – in which the record of the biological parents is kept sealed until adulthood. In the narrative of the film, I access that information for the first time. The story concludes with me writing to my biological mother.

PCK: If one part of your identity is ‘who you are’, another part is ‘what you do’. How does that connect?

JB: As a child, I was always told how good I was at drawing… and as an adoptee, you have an extreme desire to please – so I wondered: did I want to become an artist just to please people? And is artistic ability something you can inherit, or is it a matter of conditioning?

PCK: M.R. is the first part of a planned trilogy. Will we learn what happened after you wrote the letter?

JB: You’ll have to wait and see! The other films are only in my head at the moment. But they will also use my sculpture as a way into autobiographical themes via my writing – I’ve always written alongside and as part of my practice, including plays, dramatisations and documentaries for BBC Radio 4.

PCK: ‘Pardes’, appropriately for a space that was once a fruit warehouse, brings an apple green light to a structure derived from the leaning design of historic glasshouses in Scotland. What were you thinking about?

JB: I wanted to make a hybridisation of the different growing structures I’d found, and I also see it as an abstracted version of an orchard turned on its side. I am interested in the connection between harvest and structure – that universal connection between growth and shelter. Pardes can read as a roof, upward growth and beams of sunlight as well as echoing the beams of the warehouse. And it’s not so much occupying the building as intersecting with it. As with my other sculptures, the work acts like an eye you can look through, picking up reflections and refractions from its environment. The work sees the building – and us. In many ways, it is one of my most abstract works, I pared it back over lockdown. It reflects my questions during that time: ‘what is essential? What is not?’ 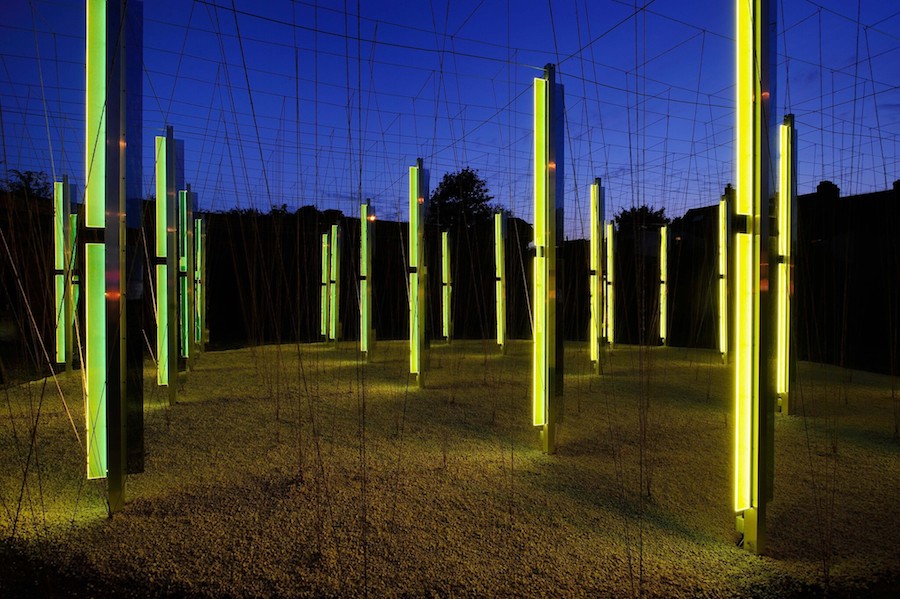 PCK: ‘Pardes’ uses fluorescent Edge-Lit Plexiglas, which has become a signature material for you?

JB: Yes, rather as fruit takes in light and makes something of it, the Plexiglas sucks in light and pushes it out at the edges, so they glow with a green light that will sustain us through winter. This is the first time I’ve made such a structure inside: I was going to flood the work with artificial light, but instead, I have embraced the dark light of the space, so the plexi just picks up any light available to it. It is a gloaming work, evocative of landscape and perhaps the times we are going through.

PCK: Is that a stuffed owl up there?

JB: Yes, that’s a detail you might not notice at first. Perhaps it will catch the mice in the warehouse…In seriousness, the owl connects to a wonderful woman I met during the course of researching this work. You can only access the full story behind its presence by asking one of the gallery hosts.

Pardes runs to 18 April at Fruitmarket, Edinburgh. M.R. will be screened there in March and will also be on view at the Hayward Gallery this summer. Dates and times to be confirmed. Jyll Bradley is also in the group show ‘Trees Die Stand: Plants and Humans’ at Pi Arts, London, until 15 January.