Rarely can a portrait, including a dead body under a sheet, have created such a powerful, immediate, critical and public response.

Ken Currie, undoubtedly among the most significant painters of our time, is known for his dark side, his bleak, black pictures of haggard figures and harrowing happening, tortured flesh, forensic finales, illness, death. Long before Co-vid, he recognised the fragility, vulnerability and desperate aspects of human life and, never flinching, captured them with an evocative intensity. 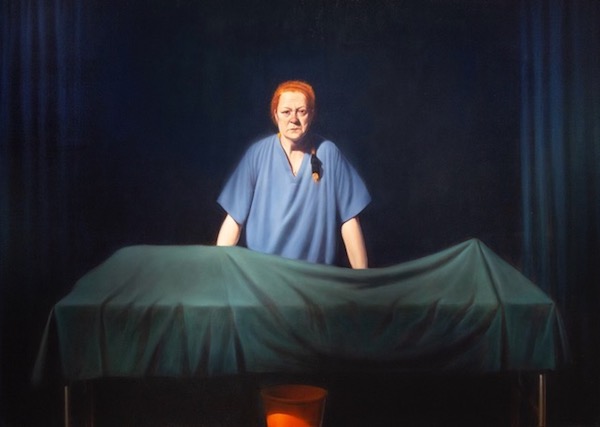 Death is also central to this new work. Yet, it is transformed into a welcome statement about power for good, knowledge as key, medicine’s possibility to resolve problems, and – in the right hands, a consoling ability to reveal lost identity.

Titled Unknown Man, Currie’s poignant, dramatic, the large-scale spectacular painting shows Professor Sue Black in surgical robes standing behind the covered remains of a body. She is a world-famous distinguished forensic scientist (Dame of the British Empire, FBA, FRSE, FRCP, FRAI, vice-chancellor of Lancaster University and a peer in the House of Lords) and this in itself comes over strongly. Currie is a reluctant portraitist, yet on this occasion, he himself was keen to create it.

“I knew exactly what I wanted to do. I invited her to my studio in Glasgow, and she came. The idea was simple, pretty basic: a big table, a surgical sheet and an orange bucket. I did try other compositions but always came back to my first thought. And it worked. I didn’t need to show the skeleton.”

The confrontational quality alludes to Black’s important and revelatory work, with all the drama, intensity and careful calibration that are the hallmarks of her career. Life and death. A sober and sobering responsibility. Our most important subjects. She has identified bodies of murdered children, worked in war-torn countries where body parts are common. In 1999 she became the lead forensic anthropologist to the British Forensic Team in Kosovo, deployed by the FCO on behalf of the UN, and later that year deployed to Sierra Leone and Grenada. In 2003 she did two tours to Iraq. In 2005 she was part of the UK’s contribution to the Thai Tsunami Victim Identification operation as part of the Indian Ocean earthquake international response. And that’s for starters. As Currie says, ‘It’s mind-blowing.”

Currie and Black met via a BBC4 discussion on art and anatomy. On-air, Black asked Currie if he’d ever witnessed a dissection. Maybe assuming that, as was the case traditionally, art students studied anatomy. Think of Rembrandt’s famous Anatomy Lesson. Currie admitted, no, he had not. She asked if he would like to. Currie laughs. “I could hardly say no! So I visited her in Dundee, where she was then director of the Centre for Anatomy and Human Identification. It was a very visceral experience. Sue has had a very impressive career. ”

Currie knew that as a crossbench peer, Prof Black would be unable to give him much time, so he took a plaster cast of her face. Quite a brave thing to do! But Black seems able to cope with anything. “She told me her first Saturday job was in a butcher’s shop in Inverness, where she grew up and went to school.” Dedicated but passionate about her work, she emphasised to Currie the respect and even reverence with which bodies must be treated. Objectivity coupled with humanity.

The composition itself has a directness and power, being arranged around a central axis, her red hair echoed by the orange bucket, “which I bought at B & Q for £1 though I did order a proper surgical sheet. It was important to get the authenticity, the exact reality.”

Prof Black’s reaction at the unveiling, shown on BBC TV, was obviously genuine, one of delighted surprise and, no doubt, relief. Currie can sometimes go for the macabre. Happily here, he has given us a perfect 21st-century role model: a distinguished woman scientist passionate about her job and above all capable of taking on whatever the world throws at her.

The painting, now on show at the Scottish National Portrait Gallery, is on loan from Ken Currie. “It’s my picture, my idea. It’s not a commission, but I am delighted it’s on public display. I have another picture, The Three Oncologists, 2019, in that collection. I’ve received great support from the SNPG.”

Meanwhile, Currie currently has a show in Hong Kong, a place with multiple political and social issues. Lockdown. Co-Vid. Hong Kong. I am sure he will soon take up his brushes and give us his response. These are big issues, serious problems. Just what Currie loves!