For 150 years Kirkcudbright has been an artists’ town, the “St Ives of Scotland.” But while St Ives has a Tate, Kirkcudbright in south-west Scotland had to wait – and wait – for a gallery to house art by its Colony artists. Last week a superb, brand new, elegant, modern £3.2m gallery by ARPL Architects of Ayr created out of the transformed 1878 Town Hall was opened by Princess Anne who will meet its initiator, well-known painter John Halliday.

Born in Kircudbright in 1933, at 13 an exhibition of French 19th century paintings fired Halliday’s decision to be an artist and led to his friendship with Cecile Walton, the show’s curator and daughter of Glasgow Boy, EA Walton. “I rushed out at playtime to see that show!” Halliday remembers. Study at Glasgow Art School followed, with Geoff Squires, John Miller, Willie Armour & Jefferson Barnes memorable teachers. At graduation, he won an RSA bursary prize and was second to Elizabeth Blackadder in another. “I won £50 for travel but was so broke I told them I couldn’t do that. But someone came up with another 50 – so I went to Venice.” Halliday has painted his beloved Venice many times since. 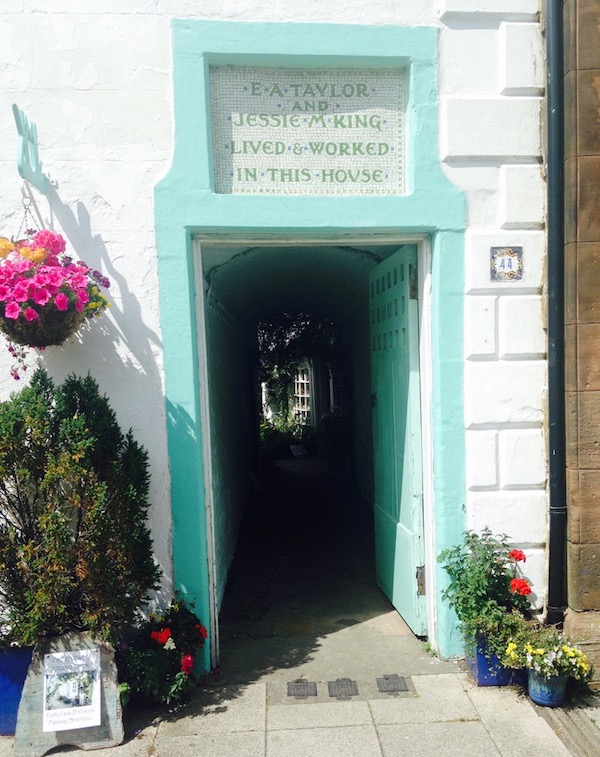 His youthful admiration for colony artists like E A Taylor, Jessie M King, Cecile Walton, Dorothy Rey, Phyllis Bone et al, made Halliday fight for a permanent ‘Homecoming’ of their works. The community joined in and took over the organisation. “I am NOT a committeeman!” he laughs. Happily, all Kirkcudbright is delighted with this wonderful, long-awaited bonus for the town.

While the ground floor presents, permanently, the story of the Colony, a large exhibition space above houses a changing programme, (currently WASPS STUDIOS, celebrating their 40th birthday with works by artists from 18 buildings across Scotland.) The dramatic suspended mezzanine is for education, the top floor for smaller temporary shows. Till September it’s SCOTLAND’S EARLY SILVER, a beautifully displayed exhibit of spectacular objects dating from AD75 to 1000 on loan from National Museums Scotland.

But the main focus here is “The Colony.” The Kirkcudbright Artists’ Collection of 600 works was officially recognised as a Nationally Significant Collection in 2015. By 1900 Kirkcudbright’s reputation as ‘The Artists’ Town’ drew many artists. Upwards of 50 significant artists lived or frequented picturesque Kirkcudbright over the years – and still do!

The exhibition, arranged chronologically, begins with a group of pictures by the famous FAED family, 8 artists in all! Best known is Thomas who went to London in 1852. Encyclopaedia Americana (1886) stated “Thomas Faed has done for Scottish art what Robert Burns did for Scottish song. He has made it attract universal interest and command universal respect”. Not bad for a humble miller’s son. 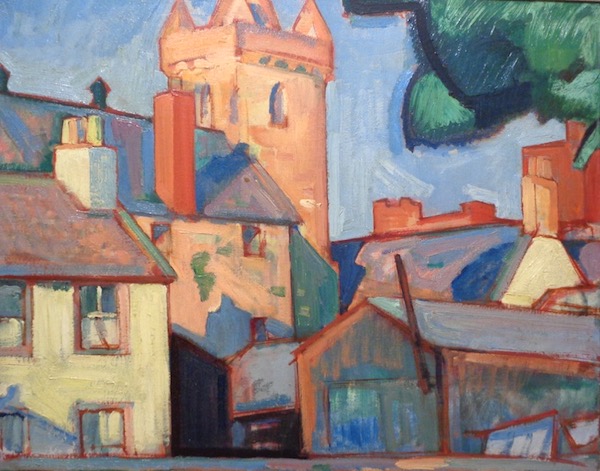 The eldest, John born 1819, inspired by seeing masterpieces by Poussin, Velasquez, Durer & Reynolds in nearby Cally House, trained in Edinburgh, moving to London where he was a celebrated RA exhibitor. But unlike most of his family, returned. His many portrait sketches of siblings and early miniatures demonstrate his precocious talent. The show contains an exquisite ‘Little Seamstress’ 1890. His ‘Rabbit Catcher’, is a favourite too. Faed also had a following in the States. His Portrait of George Washington taking the Salute was very popular.

The best known of the next generation is local boy E A HORNEL, born 1864, mentored by Faed, who, after one trip to Japan in 1893, stayed put in Kirkcudbright. The beautiful luminous Galloway landscape with its clear light, the quaint town with its working harbour and unspoilt seaside setting, plus Hornel’s presence, inspired many, like Glasgow Boys James Guthrie, George Henry, David Gauld, E A Walton, DY Cameron, plus Charles Oppenheimer & William Mouncey, to move there or visit.

Hornel’s house is now a splendid (National Trust) Hornel Museum but he is represented here by characteristic late sentimental potboilers of cavorting little girls, which sold well and made him rich.

The next influx centred around Jessie M King and her designer husband E A Taylor. In 1908 King bought a big house, Greengate Close plus a row of 6 cottages behind it, for £575. The cottages are vital to the Kirkcudbright story as King ran an art school there, where many “Greengate Girls” provided “a heady atmosphere of sisterly solidarity”. By 1920 journalists were writing of the ‘Greengate Close coterie,’which included the young Anne Redpath & Dorothy Nesbitt.

King had a big personality and was a versatile artist. She worked in the art nouveau ‘Glasgow Style’ illustrating books, posters, cards, designing jewellery and batik fabric for Liberty. She also taught at GSA but her main income came from her hand-painted pottery. All aspects of her work are well represented here, along with characteristic watercolours by her husband.

Many Greengate Girls came and went, Cecile Walton first came in 1917 to visit Dorothy Johnstone, who taught at Edinburgh College of Art, but Anna Hotchkis who arrived in 1917 stayed a lifetime, till her death at 100 in 1984! 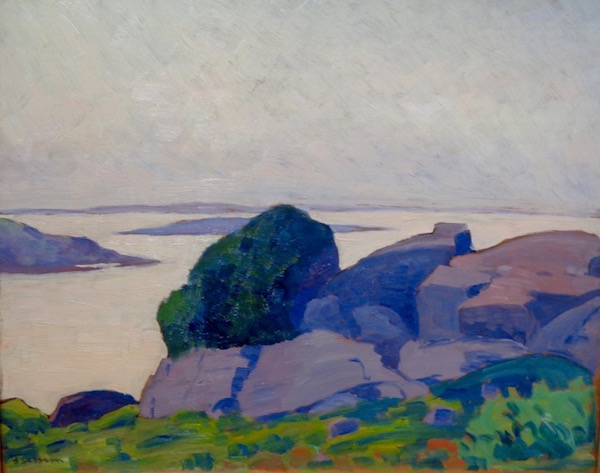 Another “Wee Montmartre” was Millburn, the studio of Glasgow Boy, Robert Macaulay Stevenson who took it in 1932. Cecile Walton succeeded him, and though a tiny space, she “made it magical” according to Halliday who spent many stimulating visits. “She had such interesting friends – like David Sassoon. I had a wonderful time there.” Halliday was the last Millburn resident.

The Colony installation on the ground floor has a traditional look well suited to the Colony’s works. Upstairs things quickly turn very modern with lots of glass and angled views into the cafe and galleries.