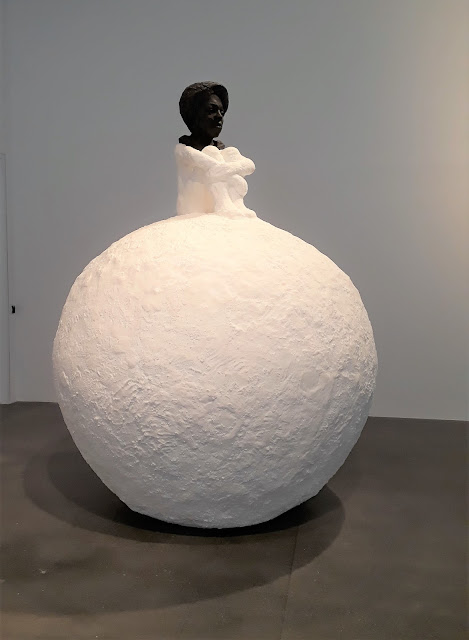 Having set up a matching weather backdrop, Lorna Simpson’s first London exhibition uses snow and ice to dance her female protagonists between suggestions of stasis (attempts to arrest modernity in the USA, perhaps), misinformation (stacked issues from 1930-80 of the black culture magazine Ebony are seen through icy distorting prisms) disaster (paintings based on mash-ups of mountains, volcanos and strips of news text), froideur (cold shoulders from the ‘Me Too’ movement?), and transformation between forms. And it’s the edge-of-surreal transformations in the latest 40 of her subconscious-tapping collage couplings of agency photos with heads cropped from Ebony which communicate most directly. One of them leads on to the dominant sculpture of a woman precariously, if funkily, placed on a giant snowball – even before we deduce that only the collaged-on head will remain once the ball-plinth and body go the way of all melts. 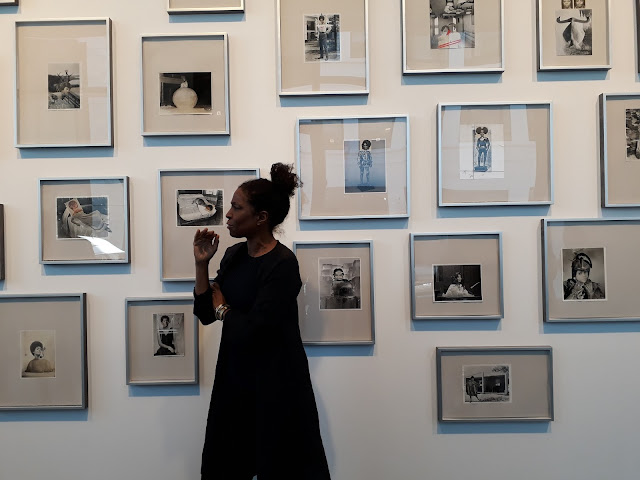 The artist explains her collages: that for Woman on Snowball is just above her 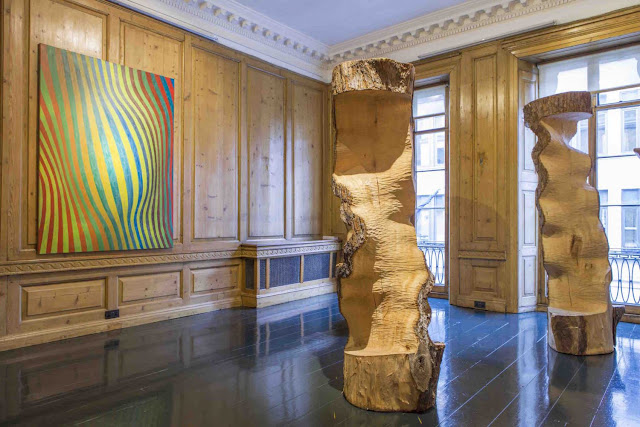 Peter Schuyff came to prominence as one of the Neo-Geo painters in New York in the 1980’s, but moved to Amsterdam in 2003. He’s known for geometric abstraction with a ‘stoner Zen’ aesthetic, and wood carvings which use the shape of a baseball bat as a convenient starting template. Here the sculpture has swollen to uncover feminine undulations in three tree trunks, two of them named after ex-wives. They look great in the wood-panelled gallery. Other painted motifs include infinite spaghetti and a sort of anthology of previous themes, as shown below. The whole ensemble has a characterful vibe consistent with Schuyff’s parallel interest in making music. 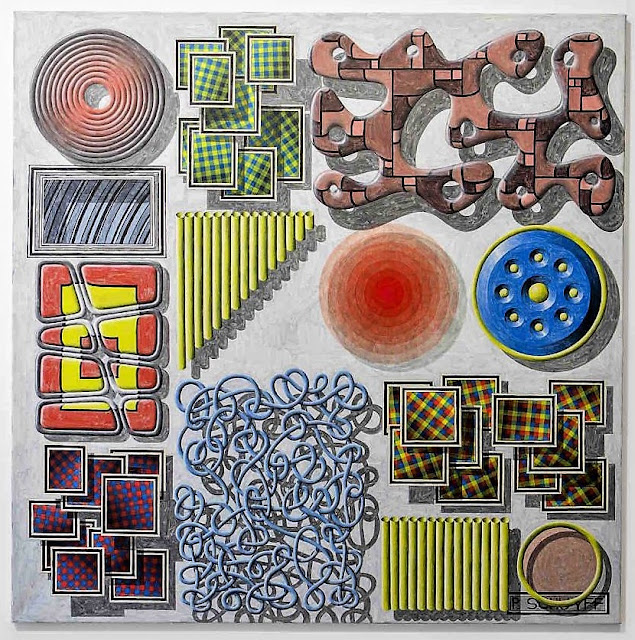 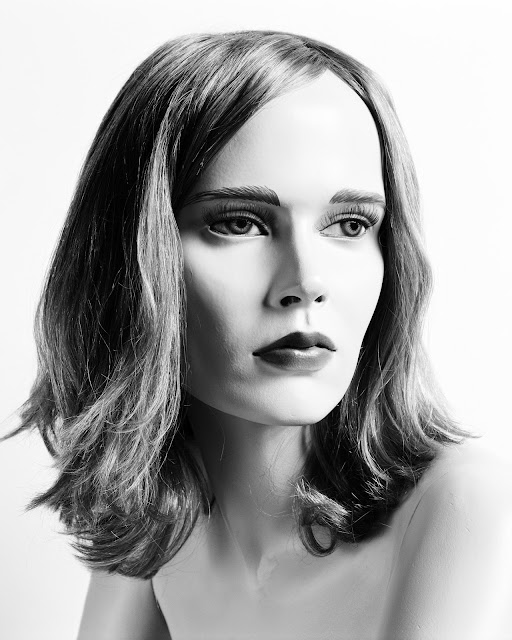 Untitled, from the series ‘Mannequins’, 2003

Alongside other subjects from fruit to engines to bodybuilders, French photographer Valérie Belin has found several ways to focus on ambiguities and uncertainties in depicting women – if, indeed, they are women (‘Transsexuals’, 2001). Are we looking at a person or a model? (Mannequins, 2003). At the spilling out of inner life or the drowning out by cultural norms and excess information? (‘All Star’, 2016). At physical make-up or digital additions? (‘Painted Ladies’, 2017, in which the foundation is more like an abstract disguise than a figurative enhancement). All of which and a makes these 15 images from six series, all printed huge and clinical, an arresting line-up at the newly-named Huxley-Parlour. An interesting comparison, incidentally, is with Laurie Simmons’ contemporary classic ‘Fake Fashion’ series from 1984 at Amanda Wilkinson’s new gallery in Soho. 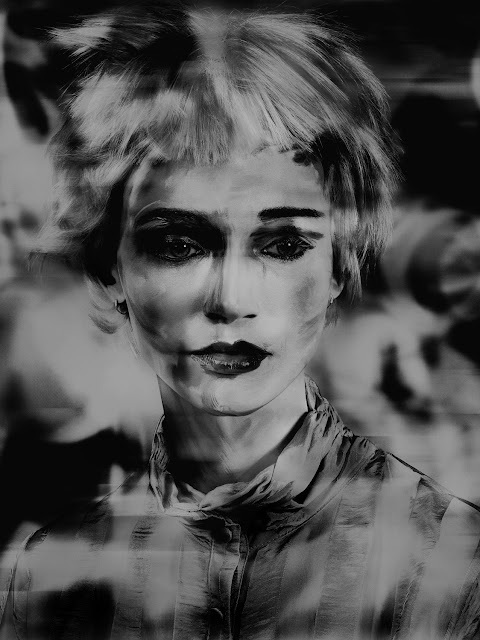 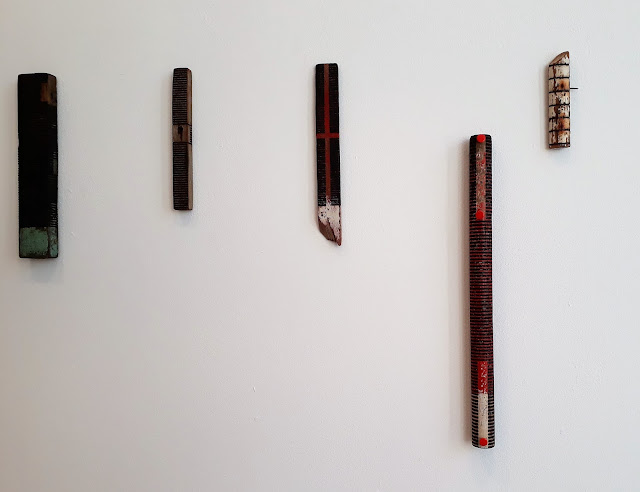 Roger Ackling (1947-2014) worked through the universe rather than the hand, using the sunlight focused through a magnifying glass to burn lines onto card, paper, pieces of wood and detritus from marginal zones. He met his future wife, Sylvia Crowther, at the wedding of his close friends the artists Trevor Sutton and Carol Robertson in 1985, and now they have chosen and presented a wide range of Ackling’s work and archive materials. “When Roger was working”, says Robertson, “he   entered a world of ritual and hermetic order… Time burned in linear geometric patterns, line after line after line. He liked to say he was always making the same piece of work. So in our mind’s eye we join all the lines together like a burning fuse, stilling our minds too.” The resultant Gesamtkunstwerk isbeautiful, meditative and – given you can get a twig for £1,000 – not so very expensive to buy in to. 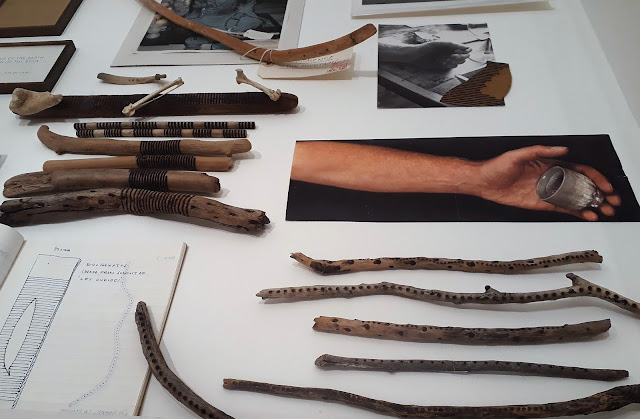 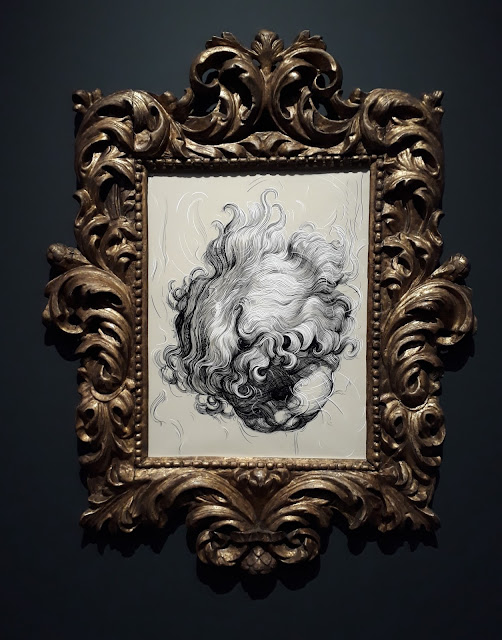 I tend to assume Glenn Brown is a slow worker – influenced, no doubt, by the exactitude of his famously flat ‘Auerbach copies’. Yet here are a commanding 60 works made in 18 months, with three distinct streams prominent: painting reworked, as usual, from many sources but always from other paintings, the queasy Life on the Moon being my favourite; Indian ink drawings which distort art history, often by taking their cue from the pre-sourced frame, as is at its clearest in Fat Boy(1945); and Brown’s signature method of making sculptures from paint in the very opposite manner from flattening an Auerbach, here applied to riotous effect on the armatures provided by found sculptures. Prolific, then, yet good. 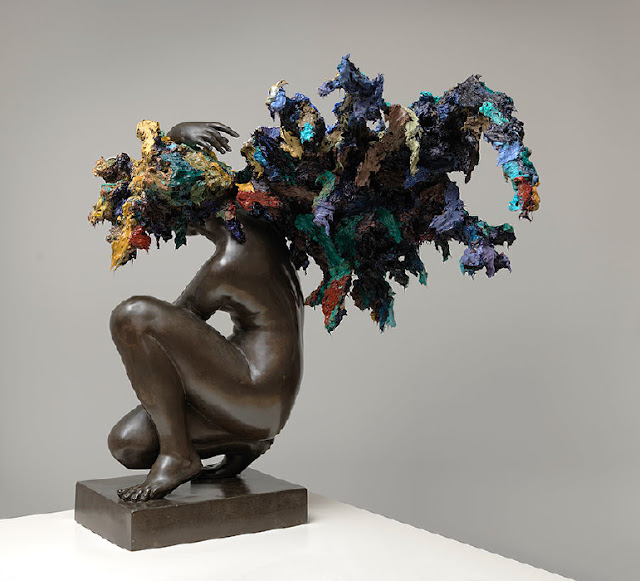 Let me ferry you out to sea To see who you could have been When time comes to row back in You’ll be in the place you should have been, 2017 – Oil paint on bronze 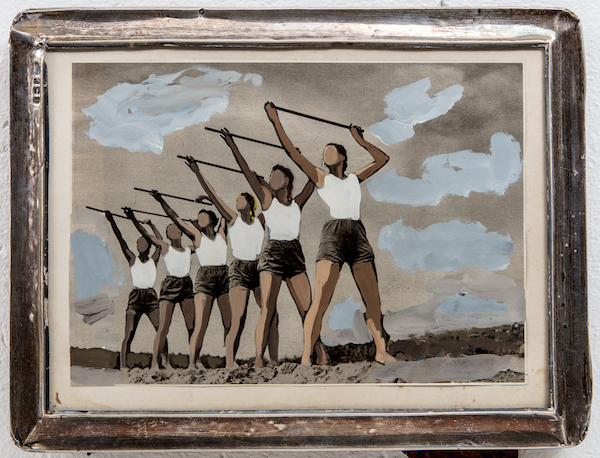 Whereby a Jewish artist tackles, modestly yet intensely, the reason Freud lived here during the last year of his life: fleeing Nazi Germany. Such a charged subject suits Gideon Rubin’s way of sourcing old magazines (from Germany in the 30’s) and using them to make collages, and paintings at a further remove. He paints out all fascist references as well as all faces – the latter an established move in his practice to universalise an image and shift what viewers focus on. He also blocks out, line by blacked line, a copy of the original serialised English translation of Mein Kampf, as if seeking to identify the abstract pattern of evil. Rubin, moreover, secretes much of the work in among the many archaeological objects in Freud’s study. But some memories cannot be suppressed, and we know what came next. 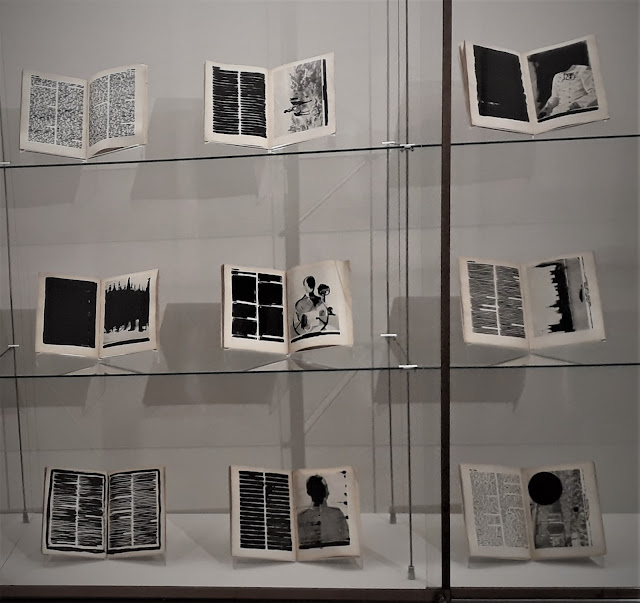 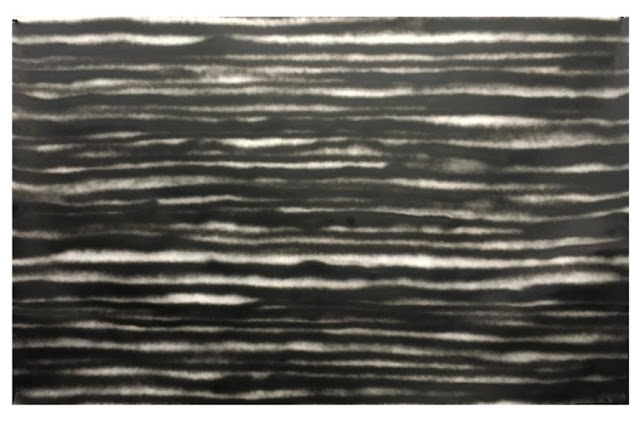 Horizontal Hold 25, 2017 – 100 x 154cm
In which three streams of Richard Ducker’s retro-futurist practice come together  to create an edgy scenario full of size inversions. Eight Horizontal Hold aerosol drawings suggest an end-of-broadcast black and white TV with which the titular reversal of Joan Jonas’ 1972 ‘Vertical Roll’ would be temporally consistent*, but they’re on the scale of the biggest new colour flat screens. The cinematic-sounding End Credits impose tabloid newspaper styled headlines onto smoky backgrounds at tablet size: that is, phrases from the artist’s spam box are given mysterious prominence on top of online images of post-explosive smoke. And one of Ducker’s Stealth Devices, a wall-based missile-like sculpture domesticated by its small scale and flock covering, invades his own show. 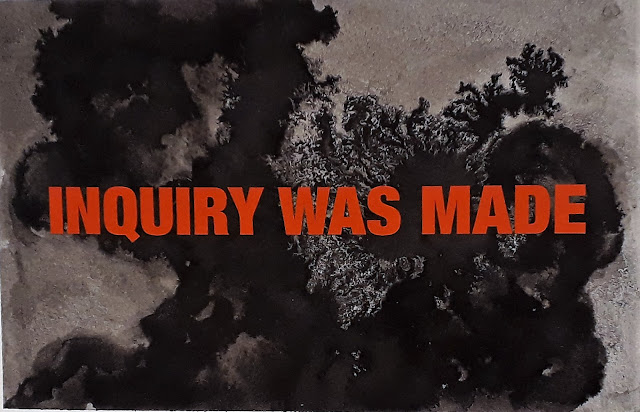 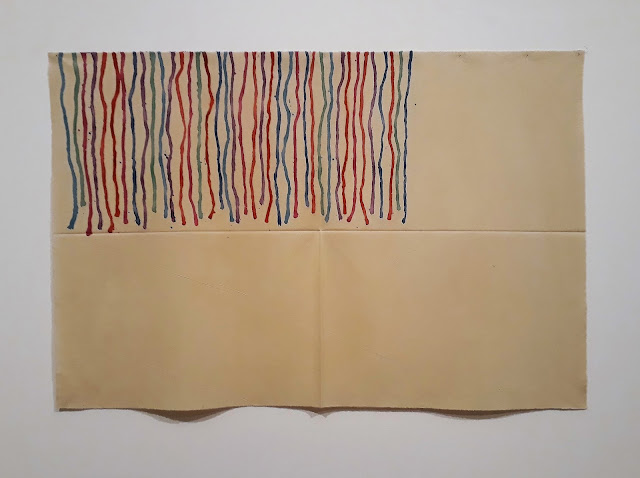 The first show to be initiated by  Martin Clark – successor to 27 years of Jenni Lomax’s direction  of Camden – gives all the exhibition space to the 81 year old Italian Georgio Griffa, He kept painting when arte povera was at its sculptural peak in his native Turin, but in the most graceful of conceptual styles. Mostly he allows pastel coloured lines and simple shapes to soak into unprimed canvasses of various hues and roughnesses, then folds them away to be tacked to the walls in due course. Both method and display imply provisionality, as if  the brushstrokes could have gone further and the marks spread beyond the picture, and the creases are of no concern because the works are for demonstration purposes only and refolding will be necessary soon enough. Yet can a picture be  left ‘intentionally uncomplete’ as Martin Holman’s text claims, or is it finished by definition when  the artist decides there is no more to be done? In such delicate conundra lies the appeal… 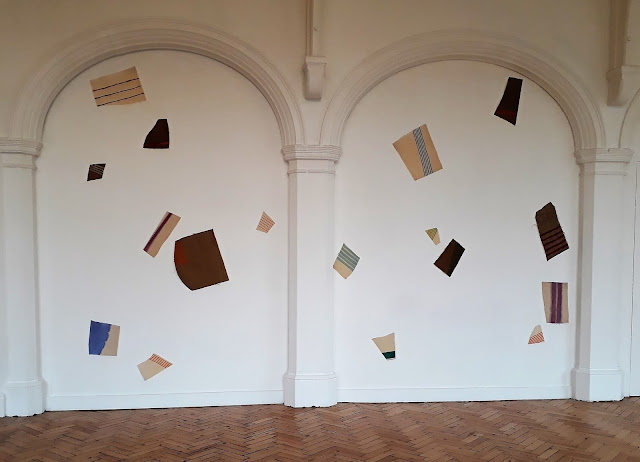 Installation with with part of the 60-piece Frammenti, 1968 (‘Fragments’) 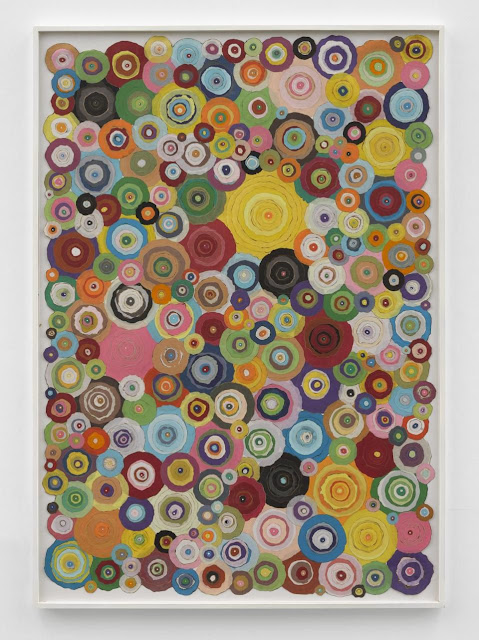 In her native Korea, Minjung was a pupil of Dansaaekhwa master Park Seo-Bo*: an inspiration, she told me, but rather severe and not a man to take women seriously as potential artists.  She moved to Italy, and then France, where she has found the Mediterranean light suits her as continues to use the traditional Korean mulberry Hanji paper, collaging singed pieces to make meditative series.. I’ve been impressed by her work several times previously at an intimate scale, yet White Cube’s selection demonstrates across several series that the same processes can have a different but equally powerful effect when they assert themselves with gently but insistently in Mason Yard’s big spaces.

* Two years ago he, likewise, showed at Mason’s Yard under Katharine Kostyál’s aegis 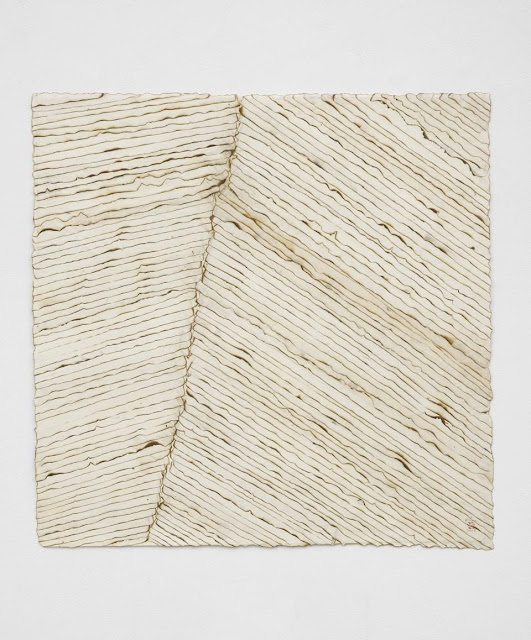 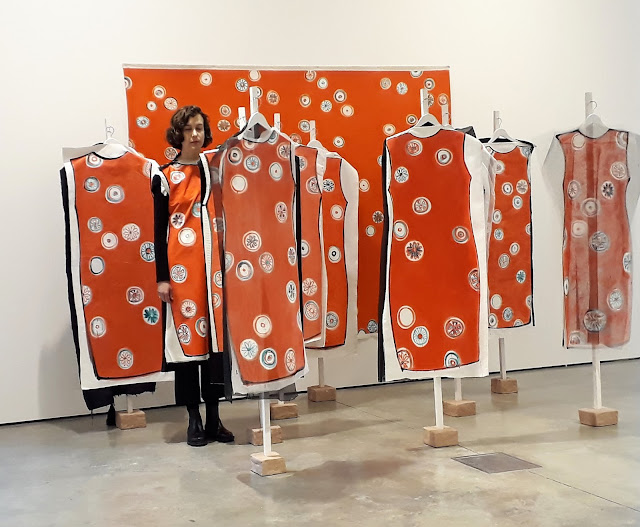 Party of One, 2013 – Installation painting and painting performed, nine dress object-paintings, one wearable dress painting, ten wooden stands, clay bases, oil on unstretched canvas
Anglo-Canadian Lisa Milroy is probably still best known for 1980’s paintings which put life into the still life against an off white background.  Since then she has brought increasingly experimental approaches to explore the performative aspects of painting and its relation to objects, and the role of clothes and shoes in identity formation. Here, for example, concentrating on this century, is a chance for visitors to rearrange 4 from 45 dresses as painterly wall-hung combinations; to choose between many shoes presented on paintings; to watch a performer move around dressed in a painting as she enacts connections around the show; and to read a 20 metre wide narrative of the studio. It’s a riot of colour and invention downstairs, and of monochrome-tending invention upstairs… 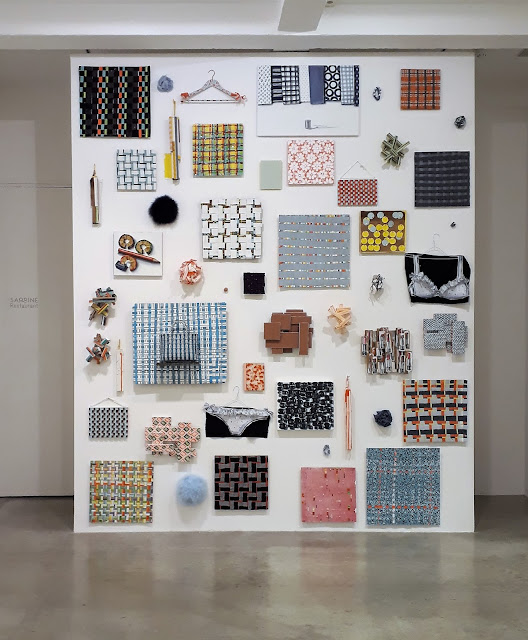