Luke Heng is an emerging Singaporean artist, born in 1987. He lives and works in Singapore and holds a B.A. (Hons.) in Fine Arts from LASALLE College of the Arts, graduating in 2013.

His earlier works are interrogations into the meaning of paintings. They reflect his attempt at understanding the conceptualisation and manifestation of painting as an art form, beginning with the history of painting. His works are responses to what he understands to be the history of painting, it can be said. He draws from this intellectual processing of art, at the same time, extracting from other art forms which have influenced how and what he produces today. In his work, one also senses the deeper processes of the unconscious influencing his production. A current exhibition at Pearl Lam Galleries is his response to the death of a loved one, for example.

Pearl Lam Galleries, Singapore, is situated at Gillman Barracks, one of Singapore’s several art hubs. There, Heng’s current exhibition is entitled, ‘After Asphodel’. Asphodel is a plant often associated with death. In the Greek Underworld, the Asphodel Meadow—a liminal space—is where souls are sent to live after death. In producing the works exhibited, Heng is seeking to understand Christian eschatology—what Christians understand to be ‘the end of times’. In many ways, Heng’s art is a reflection of his personal responses to life and death, especially in ‘After Asphodel’.

In the gallery, hangs a framed painting of the asphodel plant with its white flowers, a reference to the title of the exhibition and a visual reference to the linen canvases on white walls. In looking at the asphodel, I start to feel an eerie sense of detachment. The detachment stems from the incongruity between the framed asphodel, realistically depicted, and reminiscent of a monochrome Victorian flora print, and the contemporaneity of the rest of the paintings on display. At this moment, I enter a liminal space that Heng’s contemporary pieces take me to—that space between what is real (life) and what is unreal (death) until the latter catches up with us and becomes reality. Heng’s works are reflexive representations of his own attempts at comprehending the liminal space of, the cusp between, life and death. 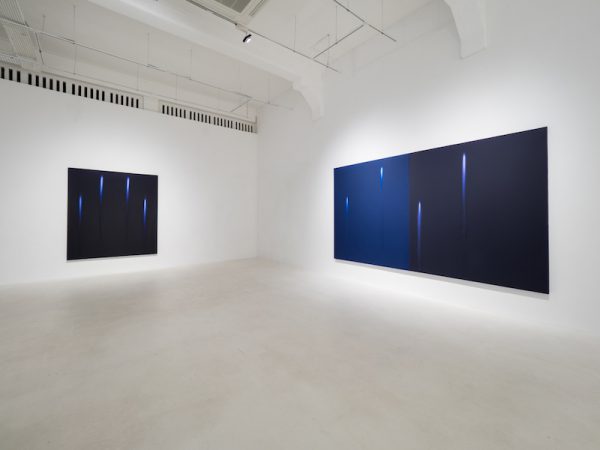 Heng’s linen canvases are representative of this liminal space where the soul arrives at upon death. Many who claim to have returned from the dead, often speak of seeing a beam of light or being surrounded by light. There, in Heng’s work, I am transported to this transient place. A white canvas with just a strobe of purplish-blue light centred, dark blue at the top, fading into a blue so light that the colour finally fades away towards the bottom of the canvas, disappearing into the bland whiteness, is representative of this in-between place—of life and death. His other canvases covered end to end in a dark blue-black, this time with violet streaks shooting upwards, take my mind to images I’ve seen representing outer space. I am floating, levitating, arms stretched out, in this cavernous three-dimensional gallery space.

In Heng’s three-dimensional work, his wax sculpture on steel stands, there is yet another attempt at interrogating the transience of time. Heng explains that time is an important concept for him as an artist. He is philosophical about the passing away of time, in the time needed for things to work and to come to fruition. He compares the waiting for oil paint to dry on a canvas to the practice of Traditional Chinese Medicine where the Chinese physician needs much time in diagnosing the patient and where the ailing body needs a long amount of time for the complementary medicines to work; Heng understands this, having come from a family of Chinese physicians. This view of time has changed the way he works with other materials. In philosophising about the transience of time, Heng is also physically negotiating the mutability of materials.

Take wax, for example, Heng has worked with this medium and material previously and is researching further ways to work with wax. In his response to the temporality of time, and to the generous space afforded him at Pearl Lam Galleries, these wax on steel sculptures represent his notions of what he understands to be the fragility of a transient natural material, wax—melting away and (re)moulded by heat—and the sturdiness of steel, yet both medium and material will disintegrate naturally with time. The space at Pearl Lam also gave him the opportunity to display more than his linen canvases and is a deliberate attempt by the curator and Managing Director, Josef Ng, to use the space efficiently to display more than paintings. It is Heng’s first site-specific display of his wax on steel installations.

Speaking of liminality. Gillman Barracks can be seen as a liminal space, a cross between the historical and the contemporary. Surrounded by lush rainforest, this art hub was once home to the 1st Battalion, the Middlesex Regiment. It was also a site of warfare between the British and Japanese forces during the three days before Singapore’s surrender in February 1942. There are ghosts everywhere at Gillman. The barracks were transformed (at a cost of S$10 million) into art galleries for contemporary art in 2012. This place where the contemporary meets the historical is, to me, a place of transience because the pulse that should be throbbing at such a prestigious art district is, sadly, ebbing away.