The German painter Magnus Plessen tends to paint in thematic groups: in 2016, he showed his ‘1914-1918’ series in London, looking at bodies armoured for, and repaired after, combat in World War I. His new show ‘Hope Love Helium’ (White Cube Mason’s Yard to 8 January) refers, says the gallery, to both ‘the ineffable dynamics of affection’ and the ‘not unrelated’ process of nuclear fusion, the transformation of hydrogen into helium that powers the sun.

You described your last show at White Cube as providing a ‘mechanistic’ view of the world. What is the angle here?

I’ve moved on to an understanding that is more about the things that we don’t see, more about the energy. I love to think of connections that exist beyond what we can perceive, to imagine that matter is attached on another level to events that we can’t control. That comes from what happens today but also happened long before we were human. I read this book ‘Journey of the Universe’ (Brian Thomas Swimme and Mary Evelyn Tucker, 2011), which talks about the stars being our ancestry, meaning that the material that we are made of was actually prefabricated 14bn years ago when the Big Bang happened. Gravity sort of pushed inwards and nuclear fusion pushed outwards, and hydrogen was transformed into helium – and through that, all the elements were created. Everything that we need in our bodies comes from that.

What struck you in that?

I love the thought that our existence starts much before our conception, and we are the same as everything else. That was a huge relief from thinking of ourselves, as humans, as something special with responsibilities and a higher position in the world. The concept of an individual is torpedoed by the thought that some matter some billions of years ago somehow formed a cell. Did it have us in mind, or is it just a creative process that goes on regardless of us? What used to be the domain of religion or esoteric speculation is now the domain of science. 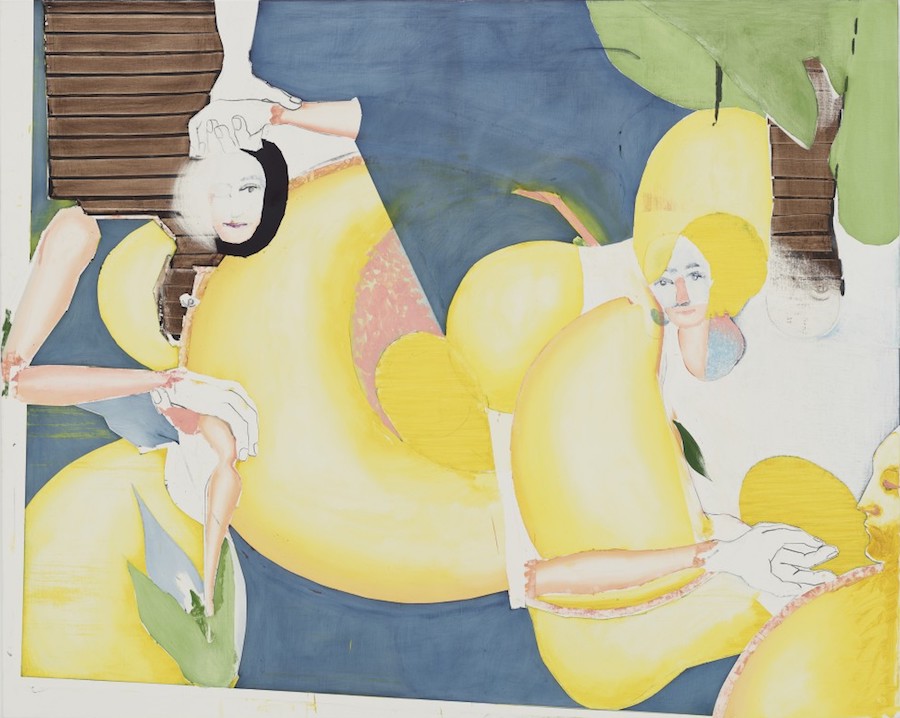 How is that reflected in the paintings? Take ‘Untitled (Fig 19)’, for example…

I think of the round shapes as neutrons or electrons blown up in size. One of the great things about being a painter is that I can follow different representational systems, be they micro or macro, and I don’t have to be true to life-size – I can blow molecules up to the size of a body. The micro and the macro are in parallel – the micro-universe has always been there, but we have not seen it because we have not thought about it. And I didn’t know when I started what that would look like, so I show to myself the world I had imagined.

This is a decidedly yellow and blue show?

Absolutely. Yellow has a certain glow, warmth and energy. I mix different yellows. Some dry slowly, some quickly, and some are largely wiped away (it is important to me to bring things to the canvas and then take them out again for the process to go forwards and backwards). And the indigo is my favourite blue, it creates a space in which you can hide things. And it pulls you into the canvas, it has a certain depth, whereas the yellow comes towards you – though I can hide things in that, too. 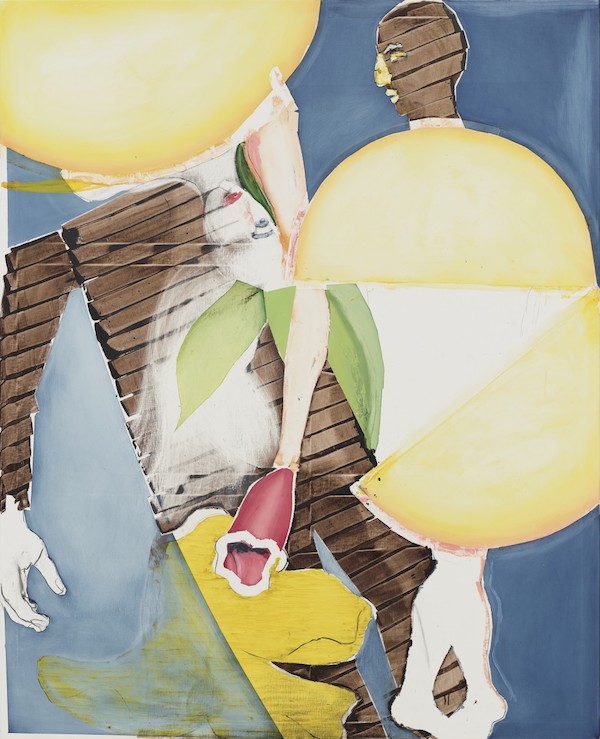 I see that in ‘Untitled (Fig, 23)’, the stretcher bar behind the canvas is picked up in the painting, both horizontally and diagonally?

Yes, the horizontals are frottage from the frame behind the painting. I like to attach the image to something grounded in reality as a stepping stone. When painting my wife when she was pregnant, for example, I measured her belly with a tape and then used that length of tape in the painting, making the painting as close as possible to reality. Here the link between the body parts works at both the micro-level and through a more sculptural system of representation. The painted wooden floor or fence forms act to block things off – they will move if attached to something moving, but they don’t have any movement of their own volition.

The female form looks rather ethereal…

Yes, she’s more like a ghost, whereas he’s very present and often composed partially of wood – a blockhead or maybe a woodhead! – yet they still have a connection. Different worlds come together, and you feel the aspect of touching – but it’s without a written script, there isn’t a narrative.

Do you still turning the canvas around as you paint?

I do. We know so many art historical images they can get in the way, but you can get rid of that by turning the canvas. What’s more, if you do that several times, there comes a point when the image comes towards you, rather than you trying to bring an image to the canvas, for example, if you’re working from a photographic image. By turning, you kill the viewpoint, as there is not one but several. And that means that some of the works could – in a different show – be oriented differently.

What are people surprised to hear about you?

That I have four sons.

I think that makes you one man in 300, as only 5% of men have four children, and the chances of them all being boys is 1 in 16… Does that large family influence your work?

I don’t separate my artistic life from my family: that’s a decision you take as an artist – do you treat it as one or as something apart? My studio is at my home, so there is a constant exchange, I step in and out of my work. I don’t paint portraits, but when I think of the female, it is always my wife. If you compared her eye-line with the women here, you would recognise it. And the energy of the boys certainly feeds in, as well!