With smaller Galleries being squeezed out of the market more and more, it makes sense to look towards ad hoc spaces. Inventive curators are turning away from the traditional White Cube and exploring the DIY and the domestic aesthetic.  Two spaces in the tiny coastal town of Margate are opening up a wider dialogue with international artists and also raising questions as to where their work should be seen. Both Penthouse gallery and Newgate Gap are in less ‘traditional’ spaces and both are by appointment only, but they are well worth making the effort.

The artists Andrew Curtis and Vivien Lee opened Penthouse Gallery last year. It is showing one of the major figures of contemporary British art, Bruce McLean. McLean is an artist who confronts the art world and its inherent pomposity, which makes him ideal for this unpretentious space. McLean is equally at home in the Tate as he is… in someone’s home, which is basically what Penthouse Gallery is; A Victorian townhouse that happens to be a family home. 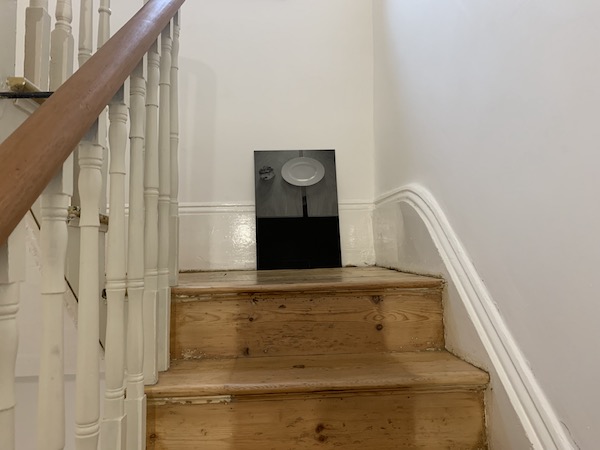 Bruce McLean A Scone off a Plate on a Table

The not so easy to remember title of their current show:  “Bruce McLean: A Lawnmower ascending a ladder plus other objects in the loft and other places, new photos of photo sculptures in new places not new ideas”, is in fact misleading. There are new works at Penthouse. Works with titles like ‘A Sliced Loaf on a Sofa’ and ‘A Frying Pan in a Jiffy Bag Behind a Sideboard’ lead you through the house and up the stairs where the works are placed. Past the bedrooms to the top of the house a ladder leads you to the loft (penthouse), where the final work ‘A Fruitcake on Top of a Wardrobe‘ can be seen bathed in natural light (McLean insisted on natural light throughout), bringing the outside in.

A nod to health and safety means you cannot go into the loft but rather poke your head in and glimpse the work from the ladder.

McLean, who regards himself as a sculptor, has consistently tested definitions of what sculpture can be, and that is shown to great effect at Penthouse. This domestic space is perfect for McLean’s subversive and witty ‘photo sculptures’ which play with the notions of photography/sculpture, space and domestic objects.

‘A Lawnmower ascending a Ladder…’ is open by appointment only (penthousemargate34@gmail.com) and will be closing Saturday 8th February 6-8.30pm when it will hold a special film screening.

Penthouse Gallery’s last show was the video artist, Marcel Dinahet. The next show opens in April with Elizabeth Magill For more information go to @penthousemargate on Instagram

Newgate Gap used to be a public loo for beachgoers, or to use a more polite Victorian term, a ‘comfort station’. Artists Newton and Ross See opened it as a project space in 2017. It is cut into the chalk coastline in Cliftonville and enveloped by Pulhamite, a Victorian mock rock grotto. The space is on a gap, which is a causeway to the sea used variously by smugglers, farmers to bring seaweed for the fields, a way to get donkeys down to the beach, and many more things over the years. 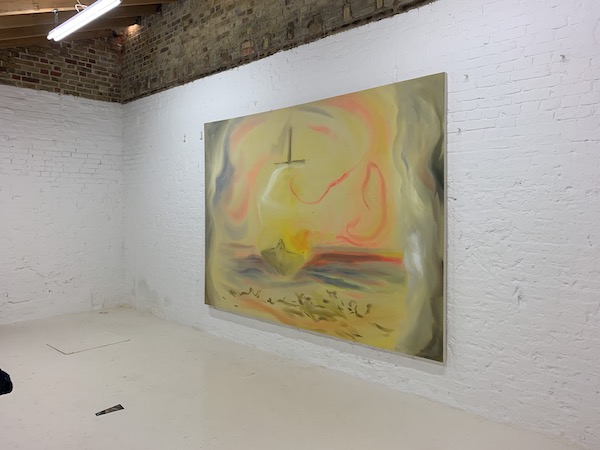 As artist and curator Ross See explains: “We do a mixture of residencies and shows, often one leading to the other. We try to show lots of international artists because that’s what we feel Margate and we personally need, a wider dialogue with the world from our tiny English coastal corner. Local artists are well looked after by Margate galleries. The Turner Contemporary is a mega monument and incredible asset to the town and has a certain mission and curatorial direction which can’t always line up with showing emerging international contemporary artists. It also has to be careful about conceptual accessibility which we don’t have to be”.

That said, the current artist Sophie von Hellerman is a local artist, albeit one who was born in Germany and has just opened a major show at Sies + Höke in Düsseldorf, and will shortly open at Greene Naftali in New York.

Von Hellerman, who lives in Margate, is best known for her large-scale, romantic, pastel-washed canvases, which are often installed to suggest complex narrative threads. She applies pure pigment on to unprimed canvas and uses broad brush strokes to produce fragile, sketchy and incredibly fresh paintings.

Newgate Gap is a refreshing addition to Margate’s art scene and I loved the ‘show’ here. It is really just one painting made on site (too big to ever get out again in one piece) with acrylic, seawater and seaweed. Von Hellerman who often borrows from literature and mythology has titled the painting ‘There Comes a Galley Laden’ (translation from the German ‘es komt ein schiff’). Facing the painting are sparse ghost-like murals which add an ephemeral quality to the show. I loved the anarchic aesthetic of this space and thought Von Hellerman worked brilliantly in this setting.

Sophie von Hellerman is on until 1st March at Newgate Gap, Margate, CT9 2DS. By appointment only email: i@newgategap.com

Newgate Gap also runs an artist in residence program. Currently, it is Helena de Pulford. In the past, they have shown Korakrit Arunanondchai, Frederique Pisuisse and Lina Lapelyte. To follow what’s on next go to @newgategap on Instagram.