Artlyst has visited Pirelli HangarBicocca Milan, which is currently presenting the iconic igloos of the late Mario Merz – the highly influential figure of Arte Povera, who is considered to be one of the most important post-war Italian artists. 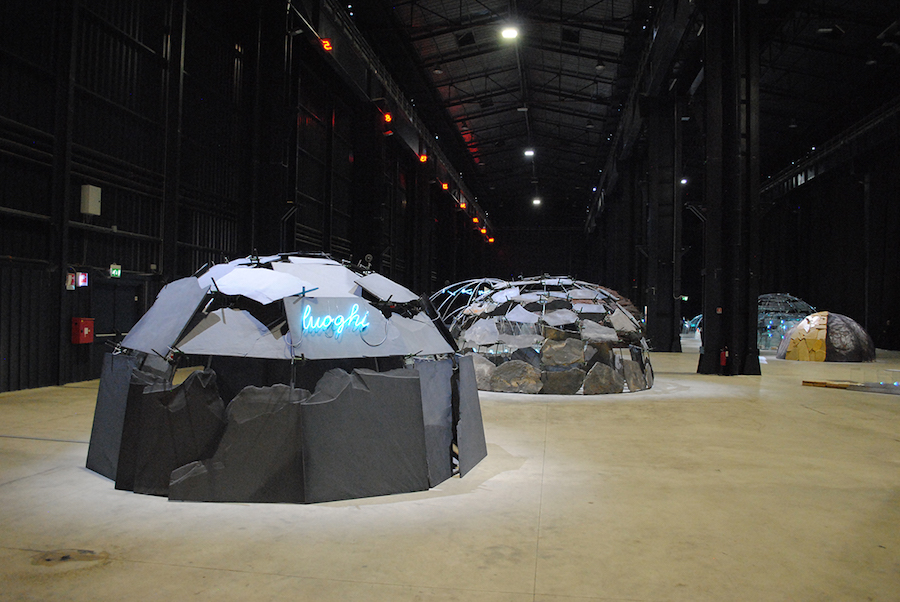 Vicente Todolí, curates the exhibition in collaboration with Fondazione Merz, bringing together Merz’s most iconic oeuvre of work; the artist’s enduring series of igloos – which date from 1968 until Merz’s death in 2003 – gathered from a number of private collections and international museums. 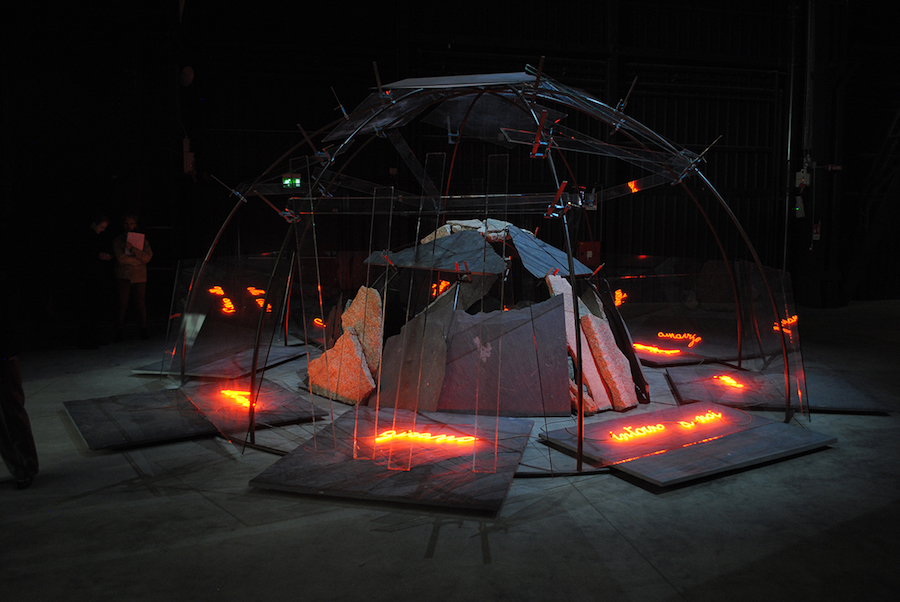 Encompassing the vast space of the Pirelli HangarBicocca; the artist’s iconic domes are displayed together for the first time – the largest collection of Merz’s igloos to date, that inhabit the exhibition space with over 30 large-scale works in the form of an encampment of hemispheres – the artist’s sculptural dwellings.

Merz’s forms place the viewer in a fluctuating position between the sculptural and the installational, creating a dialectic between interior and exterior space. The viewer is placed in a landscape of sculptural forms; where the sculptures are external and akin to celestial bodies in orbit of one another, like partially ‘submerged planets’, yet the viewer also becomes an internalised element of the work. 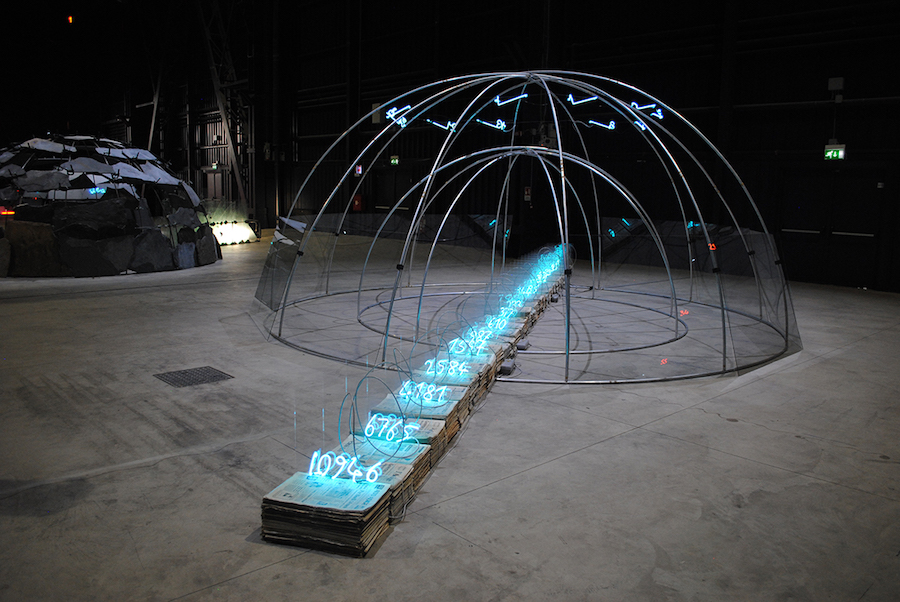 Each igloo has an internal space in which the viewer automatically projects their physical self – in fact the works are an archetype of physical habitation, each characterised by a metal dome-framework covered with numerous sculptural materials which include stone, steel, and glass – held together with clamps, or precariously held in place with daubs of clay – the artist’s domes simultaneously possess both the language of sculpture and installation. 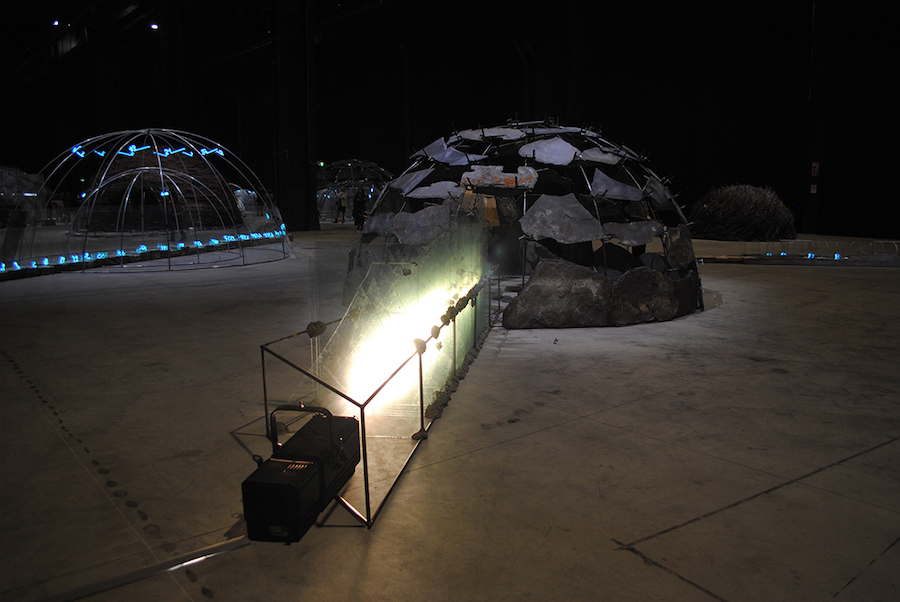 Merz equated his igloos with basic nomadic structures, and the artist’s domes are often constructed in a seemingly unstable manner, expressing the fragility and impermanence of habitation; yet the artist saw them as the ‘ideal organic form’ that he ‘carried inside himself’.

Merz’s igloos are forms reflecting a timeless need for refuge, and community – as the ‘community of forms’ encounter one another within the space and communicate – the artist’s domes juxtapose a rather Beuysian use of materials; with the electrical, in the form of neon words and numbers (often mathematical sequences), the slow chemical transformation of substance – and running water, and light. 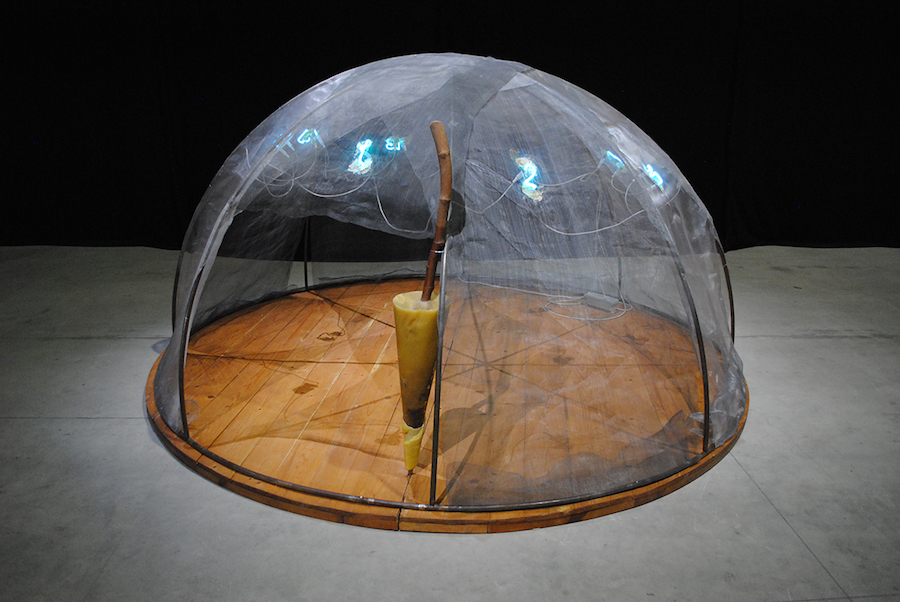 This was a sculptural oeuvre that would literally ‘build’ with complexity, evolving into a temporal journey through the narrative of a structure, and one wonders if Merz always intended that the outcome would be the grouping of the works into an interacting installation piece – a constellation of sculptural bodies formed into a single work?

The exhibition is both an oeuvre of individual works, and a single installation – incorporating one of the artist’s recurring motifs, the mathematical Fibonacci sequence referenced mathematically in neon  – the equation behind the organic spiral found throughout nature – as the works orbit one another in an eternal expansion, finally seen in a physical context – as the ‘nomadic’ bodies form an installational galaxy.