Martin Parr is famous worldwide for over 50 years of intensely colourful and wittily affectionate photographic observations of people. Indeed, he’s so popular and has so many shows that told me he does three or four interviews every week! There wasn’t much chance, then, of asking him new questions, but he was still happy to discuss his exhibition ‘Life’s a Beach’. Appropriately located in the archetypal resort of Bournemouth, it brings together two of his most enduring themes: the British and the beach. 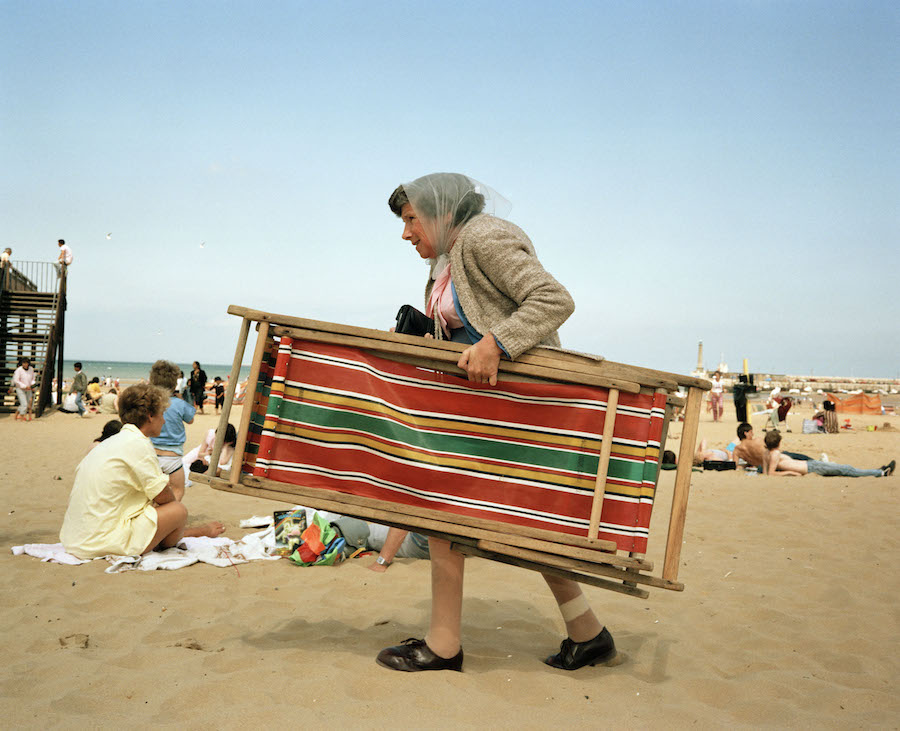 PCK: What particularly attracts you to people at leisure?

MP: I have documented many other things, including work, but if I have one overall project, it is depicting leisure. I like it when people are free to act as they wish.

PCK: The beach is one of your favourite locations. Why?

MP: Beaches are open-ended spaces where people can relax and be themselves, and they’re just lying there, you know, ready to be photographed. My parents were bird watchers, so the seaside I was taken to as a child was mainly marshes and cliffs, where we were looking for warblers and waders.   There wasn’t a slot machine or a fellow beachgoer in sight. That was OK, and as my parents were leading the bird-watchers, I would of course be watching the bird-watchers. But there is a degree of catching up on what I missed out on.

PCK: You have photographed beaches all around the world and all around Britain. Are they different in different places?

MP: They can be. On Indian beaches, the women are largely covered up, on Brazilian beaches they wear as little as possible. And the activity varies. Sunbathing is constant, but in India or Mexico, there are lots of people selling things on the beach, which doesn’t happen in Britain. And I’m drawn to the fact that it’s slightly shabby in this country, it’s slightly falling apart. I’m a photographer, not a sociologist, but northern beaches tend to be working class, whereas the middle-class beach has developed more in the south. Bournemouth, I guess, is a mixture, though I’ve photographed more often in Weymouth, which is included in the show.

PCK: I think you like to use flash outdoors?

Yes, if you combine colour negative with flash you get very intense colours. But I don’t use it as regularly as I used to do – perhaps my palette has calmed down a bit. And recently I’ve been using a telephoto lens when no such heightening is possible. 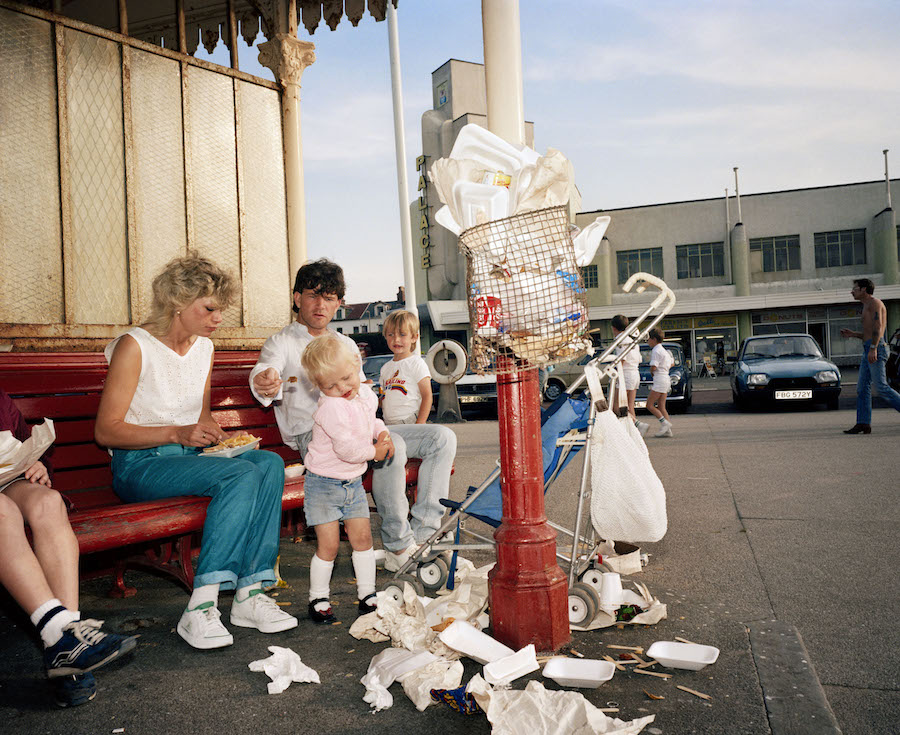 It is what it is. I’m taking a picture of reality and exaggerating it. There were photos without litter, but I chose one in which it was particularly prominent. Photography is used as a propaganda tool, which serves to sell products and ideas. I use the same approach to show aspects of reality, a mixture of documentary observation and staged comment.

Do you ask people whether you can photograph them? That very characterful woman in Margate, for example?

Sometimes I ask permission, often I don’t. She just walked across my field of vision, I didn’t speak to her. Even then, she looked like a dated character – and I like Margate, Broadstairs and Ramsgate for their old-fashioned air. Sometimes people object: that’s an occupational hazard. I accept that all photography is voyeuristic and exploitative, and obviously, I live with my own guilt and conscience. It’s part of the test and I don’t have a problem with it. Some people even accuse me of acting illegally, but in fact, there is no law against photographing in a public space the way I do. And I can use the results as I like, except as advertising.

Do you see the deckchair as operating rather as if she’s carrying an abstract painting?

I don’t know, that’s something for you to ask yourself. It works in the picture and I can’t explain why. 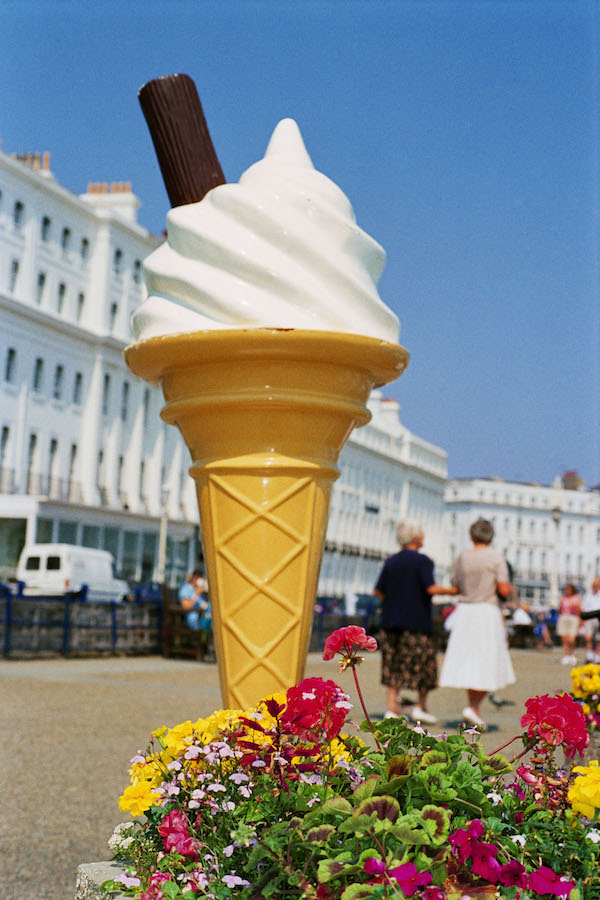 How come the Eastbourne photograph is dominated by plants and ice cream?

A surreal touch results from using something big in the foreground, that’s come out of experiments over the years. It’s the only photograph of mine to be featured on a British stamp!

It isn’t real ice cream, but reminds us that you were an early photographer of food before it became an Instagram convention?

I was ahead of the crowd, yes. Phone cameras make it easy to take such photos, with older cameras you’d have to be further away to get a good shot. I like to photograph food because what we eat is part of who we are. And not many people were taking natural shots of food thirty years ago, especially not of junk food. There was magazine and advertising food photography, but that wasn’t about junk food, which is much more interesting. 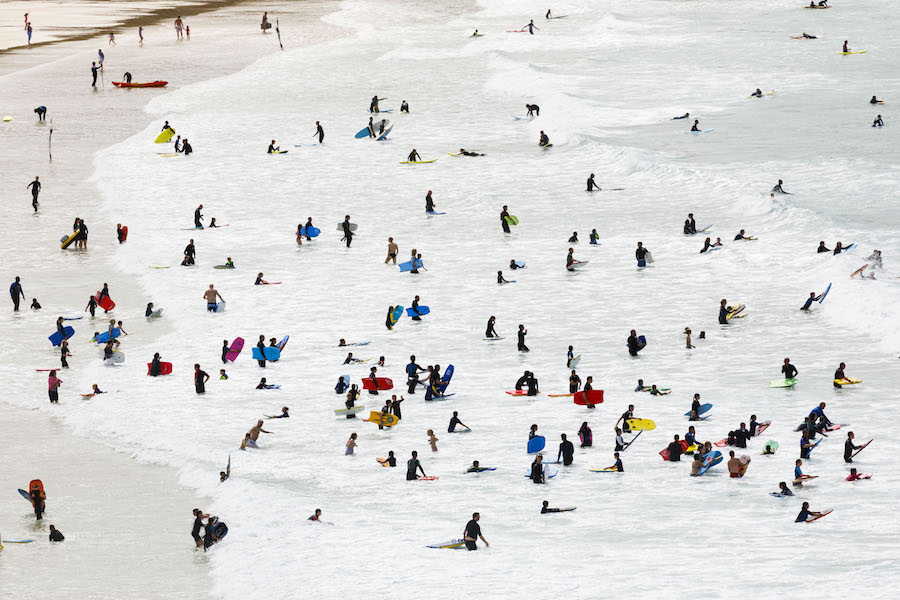 The St Ives image is from your ‘Beach Therapy’ project. Why did you choose a telephoto lens for that?

Within art and documentary photography, it’s a lens that isn’t used at all frequently. It’s quite an expensive bit of kit, but the sharpness is mind-blowing. In fact, at that end of the lens, you see things you can’t see with the human eye. The compression is also interesting – it’s almost artificial. But again, it’s part of photography and part of what I want to explore and incorporate into the pictures. What’s good is the excitement you generate when you explore and new things start to happen.

What led you to that particular photo?

It was a windy day, the surf was good. I took half a dozen photographs and chose the best.

Yes, I take lots of photos, and I gather momentum as I explore a subject. Many are ‘alright’, but that isn’t much good to me. I want spectacular images. When I look through them it’s obvious to me which is the best.  I’m happy if one image from a day is spectacular.

Martin Parr: Life’s a Beach is at GIANT Gallery, Bournemouth, to 26 June 2022

You can also see his football photography in a solo show at the Oof Gallery, London until May 8