Sometimes there are people who create something extraordinary, something we cannot ignore as hard as it may be with all our distractions, with all our worries and busy-ness. Thankfully, art has a way of keeping us civilized and checking in with our humanity. When something really good pops up, we stop and hold ourselves in place, hypnotically attracted to the invention of creativity before us. Leaders, trendsetters, thinkers abound throughout the art-world, forever reaching for the innovative and new, refreshing perspective and enriching the landscape of societal understanding– of more than concepts but ideals, or conveying the polarities of civilization. Matthias Waschekn is an art doyen with a mindful social sense of all communities’ kept me from checking my texts and emails at lunch one day.

I was introduced to Matthias Waschek through a friend. He is Director of the Worcester Art Museum. While we dined I learned I was sharing sparkling water with a visionary. I was soon to be drawn in by his buoyant passion while he told me about the projects he developed during his tenure at the Pulitzer Foundation from 2003 to 2011 and then his current engagement at the Worcester Art Museum.

At the Pulitzer, he had the opportunity to do his art historian’s dream.  Waschek explained “I was concerned about questions of social relevance: I had moved from the center of Paris to a city in the Midwest that had lost almost half of its population over the past decades. 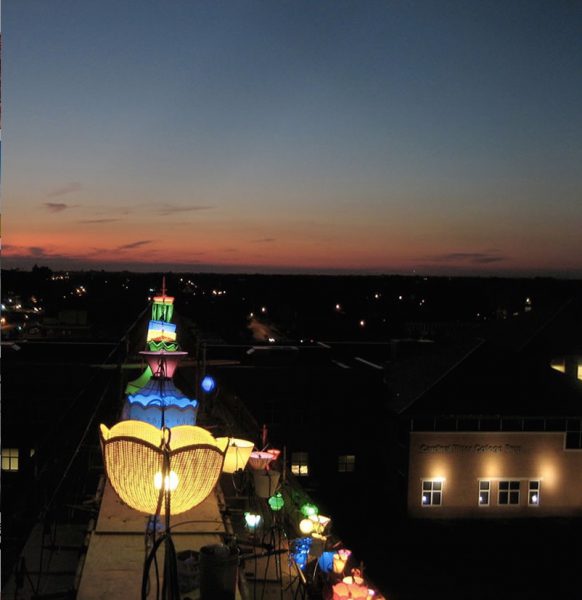 Artists Sebastian Hungerer and Rainer Kehres, symbolically reconstructed the roof of the church with domestic lamps,

Emily Rauh Pulitzer, the institution is housed in one of Tadao Ando’s masterpieces, in mid-town, close to the dividing line between a more challenged northern half of the city and a relatively stable southern half.

One of the initiatives that I am most proud of is the work I was able to do with a social worker in that context, helping Emmy and I to think about art in a challenged urban context in new ways.”

He went on to tell me about a dazzling project curated by Robin Clark and installed in the vestiges of a burnt out church.

“Artists Sebastian Hungerer and Rainer Kehres, symbolically reconstructed the roof of the church with domestic lamps, collected with the help of our social worker in the community. A web page documented the donors and their motivation to contribute. Additionally, Lisa Harper Chang, our social worker, collaborated with the schools in the area to build further lights of urban hope. “Many of them even ventured into the Ando building to enjoy minimalist art and see connections they wouldn’t have been interested otherwise.”

As I listened I pictured the burnt out church illuminated once again with its open roof and longstanding walls beckoning people to its existence in the darkness of the fall evening.  A beacon of faith calling upon people still, to believe and have faith. We talked about many projects he presented, including several engaging the former prison population and drawing out recidivists with support from social workers and theatre professionals.

“ It involved an installation of Old Master paintings from the Saint Louis Art Museum and the Harvard Art Museums – using natural light only – and a group of clients from a social service provider, Employment Connections. The idea was to give former prisoners and homeless vets a better start for their future via training/therapy in the presence of art works, and the experience of a paid job as the docent for the exhibition. After six weeks of work with Agnes Wilcox, a theater professional with a strong background in working with incarcerated populations, theatre vignettes were constituted and presented at certain times to visitors of the Pulitzer. We reached over 1000 guests, created many connections and, as we tracked our clients over the following two years saw that most of them held on to a job or continued their professional education. Although the size of the project wasn’t big enough to provide sufficient evidence “Art against Recidivism”, I hope, one day, someone takes the idea to the next level of social impact.”

Oh, there were naysayers who laughed, were smug, doubted the impact on the participants, but most, especially the participants seemed to come out of themselves, becoming engrossed with the artwork and tapping into their own creativity- rolling out their own interpretations of what they saw then slipping into a mise-en-scène from the obscurity of their own revelations.