Michael Pendry light installations were first presented to a larger audience in 2005 for the ‘Lange Nacht der Museen’ (Long Night of Museums) in Munich. ‘Störung’ (Disturbance) was shown in a Munich church and began a practice which continued with the church-based light and video installations ‘Das apokalyptische Weib’ (The Apocalyptic Woman)  and ‘Sacre Coeur’. These installations have shown his innovation and talent in finding new means of multimedia expression and catching the interest of thousands of people. Lighting the rotor blades of a nearly 100-metre high wind wheel, just outside Munich in 2010, for ‘Stern des Südens’ (Star of the South) proved to be one of his most ambitious projects.

This multimedia artist, who was born in Stuttgart in 1974, draws on his experience as a stage designer in the theatrical installations he regularly creates for cultural institutions. Having created installations for an increasing number of churches and having stated that he is driven by a desire to get through to those people for whom visiting cultural facilities is rather unusual, I took the opportunity provided by the installation of his ‘Les Colombes – The White Doves’ at St Martin-in-the-Fields, to explore these motivations more fully with the artist.

“On one side,” he says, “it comes from the nature of the installations and projects I do.” These are often large scaled and interfere with the surrounding environment or architecture. “On the other side, it is always interesting to catch the interest of people and interact with the installations I do, to see the emotions that I can evoke with the work I do.” What he loves is to create a disturbance in places we think we know and thereby force people to see things from a different perspective. He sees this as being where his theatrical experience comes into play: “Very much I guess, in terms of interacting with your audience, of creating a tension. Also about how light, sound and sculpture/architecture can interact.” 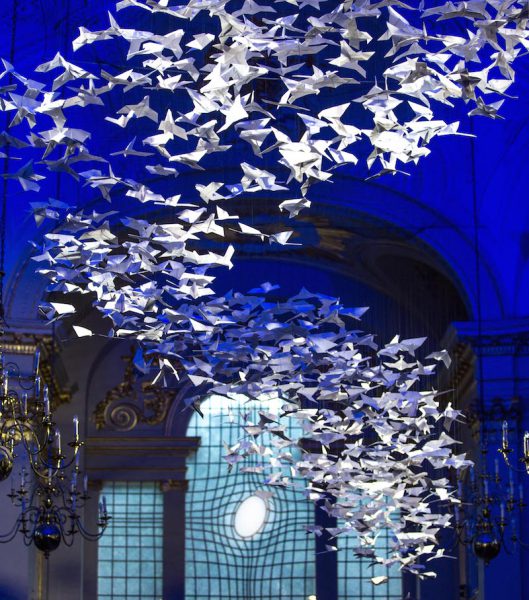 A good example is ‘Störung’ (Disturbance): “I always try to tell a story with my installations and to have different levels of approach. It is always interesting to work with the inner pictures, images you can create in the minds of the people with the work you do. With ‘Störung’ (Disturbance), for example, it was the idea, which is also very present now in our lives, of how quickly the world you live in can change, can be disturbed; within seconds and then nothing seems is as it was before. In the case of “Störung” one would literally walk through a paradise garden, projected on the church walls (a large scale image of Jan Brueghel’s drawing “Paradise Garden”) accompanied by solemn sounds and then, in a random sequence, the scenery changes within a second to a complete different scene, a drawing by Peter Paul Rubens called Höllensturz (I think it is called War in Heaven) accompanied by heavy metal sounds and lyrics from Dante´s Inferno (Out of Hell).”

When Michael began doing modern art installations in churches he had hugely negative public responses – “people humiliating me, shouting at me, writing letters to the authorities”. Yet churches have become increasingly responsive to his ideas and installations. This is in large measure because he recognises and works with the stories that they already tell with their architecture and history. He notes too that “churches are institutions that have another purpose than exhibiting art installations such as I do.” This impacts in that “they usually have plenty of services, concerts, and you always have to find a way not to disturb too much and still get the most out of it.” “With my installations,” he says, “it adds up to what the project becomes in these places.”

He thinks that his installations are “very aesthetic, playful and colourful, meaning people can easily find an approach without needing to know too much about it.” Yet, when someone wants to get more involved with the work and the ideas behind it, different levels can be appreciated, but it is not necessary to do so in order to enjoy the artwork.

‘Les Colombes’, which features 2,000 white paper doves (a symbol of the spirit and of peace) floating through the nave of St Martin’s forming an almost 15-metre long sculpture, has proved a popular example. Light moves around the space and over the sculpture simulating the doves in flight.  Quietly and playfully they integrate their movement into the atmosphere, exuding a magical sense of tranquillity and strength. The installation, quietly, tenderly and intricately, opens up mystical space offering a place of quiet reflection in place of the noise and movement that characterises public space in modern cities.

‘Les Colombes’ also features a sound cloud especially composed and produced for the installation by digital music producers Digital Haze. This infuses the space with the sound of cooing and fluttering wings, a gentle rustling of the wind and mystical chords which hover in space, alternating between a strong intensity and an ebbing away. The launch of ‘Les Colombes’ in Jerusalem and London also featured Israeli musician Yonotan Maimon. Michael says: “I often work together with musicians. With the formation of Digital Haze from Munich I have worked together for several years now. Yonatan Maimon I met in the streets of old Jaffa/Tel Aviv, and I was so fascinated by his music that I asked him if he would like to play at my opening of Les Colombes in Jerusalem. He immediately said “Yes”. For me this meant a lot; that a musician from Israel played at the opening for a German artist in Jerusalem and for an art for peace project.”

‘Les Colombes’ has become an installation which is touring the world – installed in Munich and Jerusalem prior to London and travelling on to San Francisco and Berlin. Michael thinks ‘Les Colombes’ “is easy to understand, has a simple and, most of all, a very emotional message which is so relevant in our times, and last not least it is one of my installations that is not too complicated in terms of transport and technical equipment.”

‘Les Colombes’ was viewed by over 300,000 visitors in Jerusalem and Munich. Michael says, “It is always a big compliment for your work as an artist to get such a big public response.” He is encouraged that he “can touch people with my work and give them something that it is so hard to find in everyday life, in modern cities and societies.” What they find are the fundamental human rights of peace and freedom: “Folded by different people, the doves in their unity stand for such a fundamental human right. The time has come to announce and to stand up for this – for the right to peace and freedom! May the flock of doves grow, from place to place, from country to country, and across all borders.”

In addition to the continuing tour of ‘Les Colombes’ and an exhibition of sculpture in October, Michael is also close to realizing a project in Venice, which has been several years in the planning, called ‘VeniceVeins’. For this installation the canals of the city, the lifelines and traffic ways of this unique lagoon metropolis will shine in a deep red light. These underwater light streets are supposed not just to create a fascinating and unique art installation but to draw the attention of the world’s public to a problem and the peculiar situation of Venice, which is threatened with extinction. Sustainable solutions are needed.

Peace, freedom, and sustainability in a world of change and disturbance are key themes of Michael’s installations. We would do well to pay attention.

Les Colombes is free to visit during St Martin’s regular opening hours until 3 July 2017 with special late night openings with the sound and light installation on Thursdays and Fridays from 9.30-11.00pm. Further information is available from.