Artists Michael Petry and William Cobbing here in conversation for the first time in this exclusive interview for Artlyst. Michael Petry is an American multi-media artist and author who lives and works in London. He is director of MOCA, London (Museum of Contemporary Art London), and co-founder of the Museum of Installation, London. He was formerly the Curator of the Royal Academy Schools Gallery.William Cobbing’s artworks encompass a diverse range of media, including video, installation and performance. His works allude to the idea of entropy, blurring of the boundaries between the body and the landscape.

Petry: You have two new exhibitions The Ground We Have in Common at Gallerie delle Prigioni, Treviso and Haptic Loop at the Cooke Latham Gallery, London. The idea of the haptic references some new works as well as your way of working with clay. Can you tell me a bit about the initial process of making you fall back on for all of the works in clay? 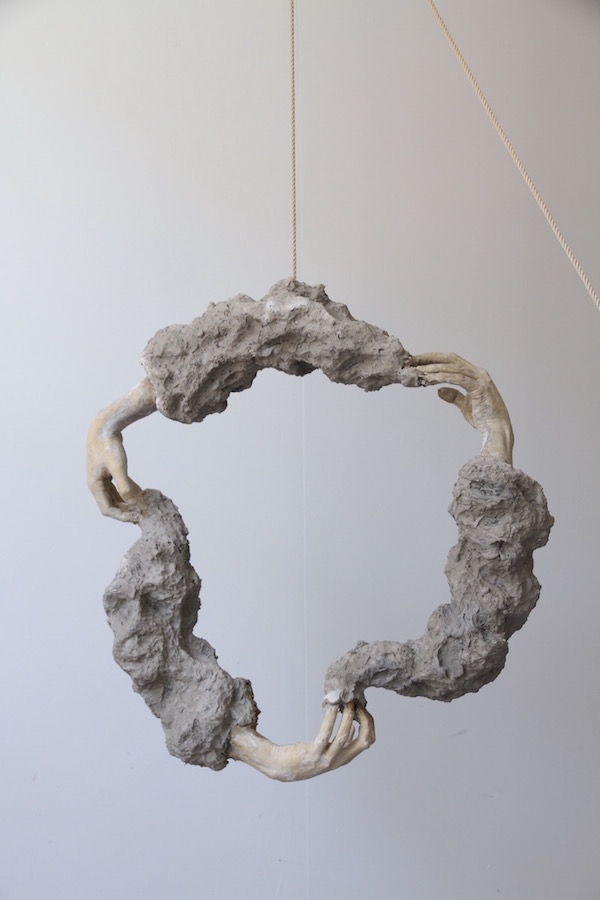 Cobbing: The ‘Haptic Loop’ sculptures tap into a rudimentary performative engagement with clay, of prodding, squeezing and smearing the material, without a defined idea of what it might become. The loop form emphasises the endless nature of this process, of sculptures seemingly caught in a state of becoming, or the entropy of them becoming unformed. There’s also the Ouroboros nature of the circle, of chasing your own tail, and I like the ambiguity of whether this is generative or futile. It’s a continuation in the sculptures and videos of a kind of wonky misshapen mass, made and felt by hands, but not guided by the eye trying to impose order on this process.

P: The two new types of Haptic Loop works are made in clay and mixed media or cast in bronze (each one is unique) – I would like to know your thoughts on the translation of the work from clay/wax/alginate into a different medium, as well as your thoughts on working with a foundry.

C: I’ve enjoyed the interplay of working with clay and bronze, of how the materials are obedient in terms of registering touch, (albeit with this coming through the wax stage with bronze), and how both materials go through a metamorphosis by the intense 1000 °C temperatures to pour and fire them. I’m a fan of the bell casting scene in Tarkovsky’s Andrei Rublev (my video Epilogue references this) as it taps into the theatrical nature of the foundry, and how it is a process that has been handed down over generations. In the film, Boriska claims he has the secret of foundry work passed on by his father, that is revealed to be a lie, so he relies on intuition and blagging his way through the process. I’ve made my recent bronzes with the technical expertise of Drew Cole at Wimbledon College of Art (where I teach). It has been an amazing experience, learning how a process feeds into the concept of the work. Previously, I’ve made the waxes for a foundry to cast, such as Arch Bronze.

P: Those works fall into the domain of my book The Art of Not Making, wherein artists use fabricators to make or finish work and I would like to ask you how those works differ from the Cover Version series of book covers that you physically make? Can you also describe those works?

C: I’m interested in the point at which an artist hands their work over to a fabricator, from the sliding scale at one end of a detailed set of instructions, to a looser approach such as a drawing on the back of an envelope, or over the phone by describing the work. At some point, the fabricator will interpret what you’ve asked for, and you’ll get a lesser/greater level of subjective interpretation.

The Cover Version series of ceramic book covers are handed over to fabricators in a developed state, starting with the digital process where I render a simplified version of images and text for the cover, and then pass this to a laser cutting studio to cut the pattern, then I make and glaze the ceramic and this goes to the ceramic studio to fire.

P: The book covers are featured in my latest book – The WORD is Art, as they feature text in their construction. While you read the titles, that is not the whole work, you have to read the objects which are often brightly coloured as well as thick heavy objects, versions of books but we are not able to open them. Tell me more about your recent works that use text.

C: Ha! I’m delighted to be in your new book, especially as I’m thinking a lot about how text plays a part in my sculptural and video work right now, so it’s helpful to think about the context you provide. Your description of my books as ‘thick and heavy’ and that you can’t open them gives a clue to how I’m approaching language. I want them to be quite contrary, for language to feel obdurate and dense, rather than lucid and articulate. You can see the cover, but that’s it as if the inside pages have calcified. The ceramics also refer back to Cuneiform clay tablets, and I’m intrigued by how they were often scored into unfired clay, then soaked in water to be recycled, something relevant to the ‘tabula rasa’ type performances where I write into wet clay, then wipe the surface clean again.

P: All of the physical works differ a lot from your performance works with clay and the video versions of them. Do you see them in a different light?

C: The new video Text-based takes this a step further, it pits two people facing each other. They scrawl text into each other’s clay covered faces. The clay is thick and sticky and so the protagonists can only manage three or four letter words, and each one takes a minute to write. I often feel swamped by the proliferation of digital text, especially online, and how there’s a tendency to text rather than speak on the phone, and sometimes I just want to shove a lump of clay onto my minimal iPhone just to bring it into a more tangible realm! Thinking about the Cover Version series, the first book cover I pressed into clay was Kenneth Goldsmith’s Wasting Time on the Internet. The idea came from seeing a pre-publication cover image online of a kitten with an internet loader spinner. The idea of the online image of this poor cat caught in internet loading purgatory, on a book that only existed as a cover on a screen seemed so apt to return to a more archaic physical presence.