I was not looking forward to the freezing cold weather when I decided to attend the Armory week but once in New York I became addicted to the art frenzy and euphoria of the city.

The VIP opening of Armory’s 25th edition with its 198 galleries was well attended. 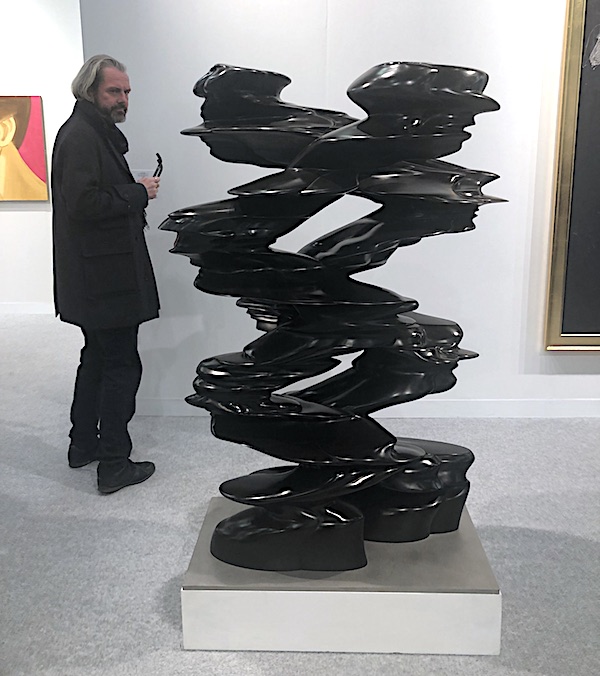 Lisson Gallery presented a focus on Tony Cragg and, with an increasing interest from American collectors for the practice of the British sculptor, reported strong sales of sculptures and drawings.

Mazzoleni Gallery focussed on the Arte Povera movement and I Jannis Kounellis’ sculptural works utilising found objects and materials such as iron, burlap, glass and wire.

On Thursday I went to the Independent art fair opening at Spring studios. The high ceiling and the natural light made the whole experience so enjoyable. With only 64 galleries, non-profits and institutions, Independent offers the luxury to truly discover new gems. There was a strong emphasis on Women artists this year, including Brooklyn-based French artist Julie Curtiss at Anton Kern Gallery, American Surrealist Gertrude Abercrombie Karma (New York), sculptor and ceramist Alice Mackler at Kerry Schuss (New York), British artist Fiona Banner aka the Vanity Press at Galerie Barbara Thumm (Berlin), amongst others.

In the evening I attended the opening of Gagosian gallery and I was mesmerized by Jia Aili’s melancholic paintings. What a painter! Working on abstract and figurative, large and small format, with a strong sense of light and chiaroscuro. A true contemporary old Master.

There were two Andy Warhol exhibitions. The main one was at the Whitney – the first organized by an American museum in decades. “Andy Warhol: From A to B and Back Again,” curated by Donna De Salvo, is a very comprehensive exhibition presenting over 350 works. From the drawings of the 50’s to the celebrities portraits, and the abstract paintings, it is definitely a must-see exhibition. More modest in size was the Warhol drawings exhibition “Warhol by hand” at the New York Academy of Arts curated by Vincent Fremond. Andy Warhol’s drawings are just exquisite.

I attended the French-American Fund for Contemporary Art party where The “Etant donnes” contemporary prize went to Kapwani Kiwanga, presented by Galerie Jérôme Poggi. It was funny to see the French Consulate becoming a disco!

On the Upper East side, I started my Museum journey at the Guggenheim and learned that Hilma af Klint was one of the first abstract painters before the illustrious  Vasily Kandinsky, Kazimir Malevich, Piet Mondrian. The Swedish artist’s abstract paintings are rooted in spiritualism and Theosophy and it is hard to believe those works were done in the 1900’s. It is so avant-garde! A well deserved retrospective. 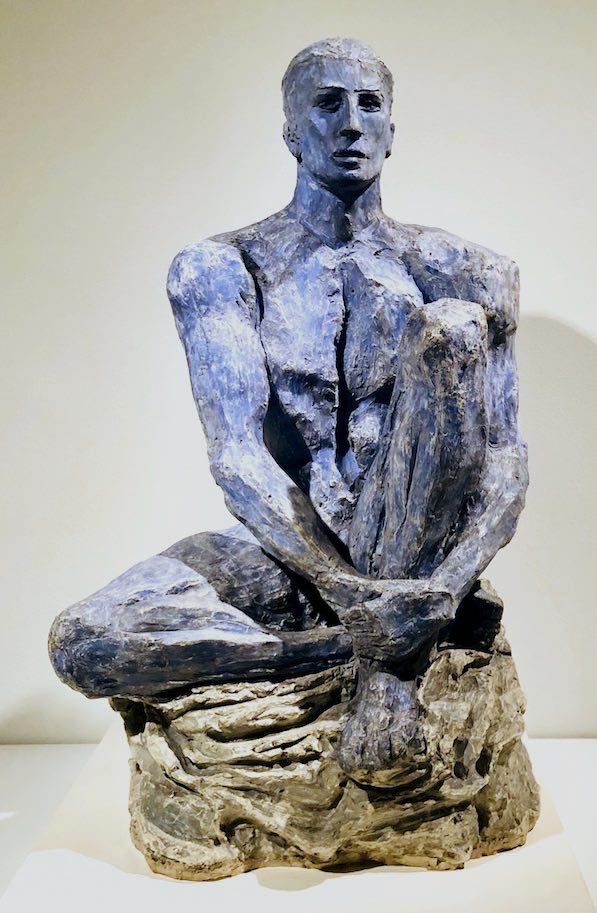 The Fontana “On the Threshold” at The Met Breuer is the artist’s first museum survey in the US in over 40 years. The exhibition emphasises the early phase of the Argentine-Italian modernist and his practice as a sculptor. The first “cut” appears in his work when he was in his fifties when he turned canvases into sculptures.

Next to the Metropolitan Museum, I visited the elegant gallery of Boers-Li showing the zen and serene works of JCJ Vanderheyden (Netherlands, 1928-2012) who studied all his life the aesthetics of perception in the tradition of the minimalist painters.

I can’t go to New York without going to MOMA. Initially I wanted to see the Joan Miro exhibition which unfortunately did not meet my expectations …but the “The Long Run” exhibition focusing on Innovation and experimentation in art was a pleasant surprise. It is built as monographic galleries, dedicated to major artists. On Kawara’s approach of time with the “date paintings” and Gerhard Richter’s The cycle October 18, 1977 were my favorites rooms. In 1988 Richter worked on the left-wing extremist, terrorist group Red Army Faction. The 15 paintings investigate the death of 3 members of the Red Army in a dark, blurred, and diffuse way, as if the ghosts of the terrorists were still present.

STPI (the Singapore leading Art Gallery) party hosted by my collector-friends Subhas Kandasamy and Martin Andersson was the highlight of my New York trip, together with the Basquiat exhibition at the Brant Foundation in the Lower East Side. According to Bloomberg, the exhibition has about $1 billion worth of Basquiat paintings. It has been done in collaboration with the Louis Vuitton foundation and shows 70 works in the newly-opened Brant Foundation, a former power station that also later became a studio of the artist Walter de Maria – it is just SUBLIME.

Before heading to the airport, I embarked on a discovery of the Lower East Side Galleries. Pablo’s Birthday on Orchard Street presents a subtle, delicate and tasteful exhibition of Pius Fox, a young Berlin-based artist who explores geometric abstraction, texture and colours in a very personal way.

Emmanuel Barbault on Broome Street works only with artists on a project basis and presents the sculptures and drawings of Erik Lindman (Almine Rech Gallery) and the photographs by David Schoerner. The conversation between the photographs, the drawings and the sculptures is harmonious and yet challenges the viewpoints.

Miguel Abreu Gallery on Eldridge Road has a very good show of Scott Lyall. The Canadian artist “investigates links between technologies of the image and the aesthetic experience” using light as his medium.

I wish I could have pursued my discoveries of the Lower East Side galleries but I had a flight to catch. Next stop: Art Basel Hong Kong, see you there! – Art Basel Hong Kong, held at the Hong Kong Convention and Exhibition Centre, features premier galleries from Asia and beyond. Underlining Art Basel’s commitment to the region, half of the participating galleries once again have exhibition spaces in Asia and Asia-Pacific. The show provides an in-depth overview of the region’s diversity through both historical material and cutting-edge works by established and emerging artists.