Interview conducted by Neil Zakiewicz with Milan-based artist, Nathalie Du Pasquier, a former member of the celebrated design group Memphis, whose boisterous African-inspired textiles are now icons of 1980s Postmodernist design. A change of direction happened when she quit design to dedicate the last three decades mostly to still-life painting. Coinciding with a retrospective at the University of Pennsylvania, her exhibition Other Rooms at Camden Art Centre, London, runs from 28 September 2017 till 14 January 2018. This interview was conducted while Nathalie was travelling by train trans-Europe to Milan.

NZ: What have you been working on for your forthcoming exhibition at Camden Art Centre?

NDP: The show opening at the end of the month will be called Other Rooms. It was scheduled at a hectic time for me, so from the beginning, I wanted to do a very different show from the other ones I was working on – not too complicated to organise because I knew the summer would be the only time I could dedicate to it. I have wanted to transform the gallery with the use of flat blocks of shapes, so I planned a system of modules with which to compose on the walls a kind of “construction”. These modules have been printed at a wallpaper factory, to be stuck on the walls. This corresponds to a desire to completely paint a space, which has not been possible on this occasion. In the bigger space, we will construct two rooms containing “real” works, which are on paper and seven ceramic pieces produced by Bitossi, an Italian ceramics manufacturer that I collaborate with. All the drawings, which are going to be shown in the “room of drawings”, were made during the summer. Other Rooms combines a new concept and new works, so I am curious to see it.

NZ: You assemble wooden geometric painted objects with found household objects which you then reproduce in paintings. Is there a principle that helps you to select and group the objects?

NDP: When I paint, the principle that guides me is to do an interesting painting. I have been less and less interested in a narrative, and that is why I started modifying the objects I represented and then completely constructed abstract ones that would not relate to my environment. Now I also paint directly abstract works without having a set installed in front of me, as I had done for many years.

NZ: Your Memphis designs were characteristically decorative, while the objects in your paintings are plain. Should I read this as a reaction against your former practice?

NDP: For Memphis, I worked on decorated surfaces in a context of design. When I started to paint, I entered a new life and understood the work would evolve by itself if I was painting every day and was free enough to let things happen. The things I started painting were just things without pattern. I was not adding any design to them, but I painted many works with objects situated on a patterned background, particularly at the beginning. 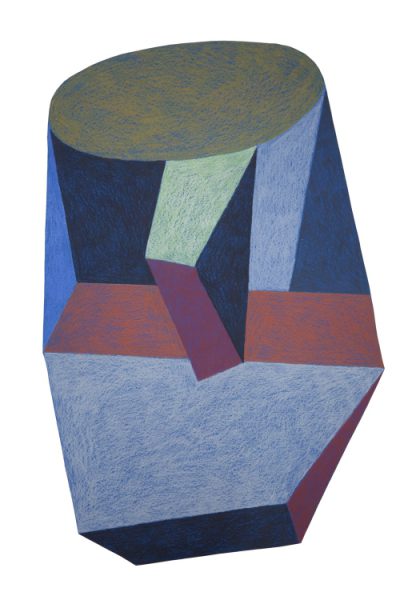 NZ: What words could sum up Memphis for you?

NDP: Memphis for me was the first step.

NZ: After abandoning design for a long time you have returned to it with fabrics for Wrong for Hay and American Apparel. To what extent do your design and painting practices overlap and cross-fertilise?

NDP: I moved away from design many years ago when the world of design and the art world were very separated, but I’ve realised recently that now it does not matter. The works for A.A. and Hay, I did for economic reasons and enjoyed doing them, but I don’t think they fertilise my other work. For these works, I put my brain in the mode “textile”, which means using the tools I used years ago.

NZ: Your work appears to be architecture or interior design models. Would you ever design a building?

NDP: It is true, I am very interested in arranging things which at a smaller scale has to do with interior design or architecture. Now I have more opportunities to make shows; I also have more possibilities to work on their installation. In a sense, I consider all I have done as raw material for future things, and that makes the interruptions due to the shows more interesting and less frustrating! To design a building would be a dream, but too difficult to realise. To paint the rooms inside would be possible.

NZ: Tell me about your daily routine as a painter?

NDP: For years I have worked every day for 8 hours, except Sunday if I go out of town. The shows which are a new thing for me in this way, are an interruption in my beloved routine.

NZ: I have read that African design has influenced you. Was African music also an influence?

NDP: I spent almost a year in West Africa when I was 18. Of course what you see and hear at that age is quite important and formative. In a way that was my university.

NZ: Italy has been your home for a while. Can you imagine having a studio in any other country?

NDP: I have lived in Italy for almost 40 years. In a big city, but not too big – Milan. I don’t think I would live anywhere else.

*Nathalie Du Pasquier was born in Bordeaux in 1957 and relocated to Milan in 1979. Until 1986, she worked as a designer and was a founding member of the design group Memphis. In 1987 painting became her main activity. Between 1989 and 2008 she worked regularly with Le Cadre Gallery, Hong Kong, allowing her to develop from her early still lifes to more abstract compositions. Her work has been the subject of solo exhibitions, including The Fruitmarket Gallery, Edinburgh (1992) and Pace Gallery, London (2017). The first comprehensive exhibition of Du Pasquier, curated by Luca Lo Pinto was held at Kunsthalle Wien in 2016 and a second iteration will take place at the ICA Philadelphia in September 2017.