Heteromorphic in its composition and heterochronic in its theme, “The Collector’s Ranch” (2019-20) of Noah Becker exhibits a phantasmal pastoral setting interjected by human figures donning garbs from bygone eras and our time. Along with the farm animals and houses quirkily staged in this Orwellian arcadia, Becker’s iconography craftily mirrors the arena of the contemporary art world and its sociocultural scaffolding. As the artist, gallerist, collector, curator, critic, art advisor, auction house expert and art historian structure the cultural matrix of the art world, this painting of Becker gives us an archetypally strange, mythical slice of that superstructure. 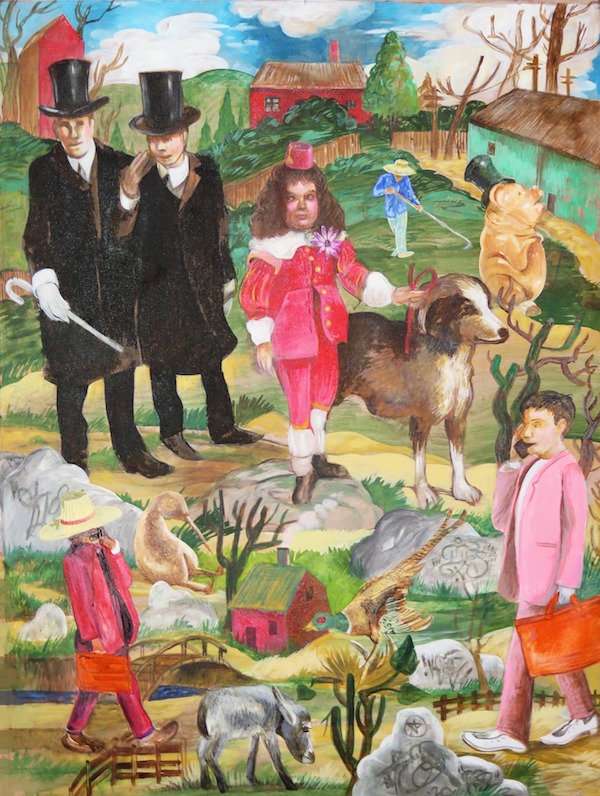 Engaged with their cellphones and walking hastily across this dreamscape, two modishly dressed men sporting pink suits and tangerine briefcases are portrayed on each side of the foreground of “The Collector’s Ranch”. Notwithstanding its ostentatious colouration and jocular rendition, the painting’s central figure in the company of a dog—flaunting a doublet and breaches in lurid pink—is derived from Diego Velázquez’s “Dwarf with a Dog” (circa 1645) in the Prado Museum in Madrid. While the complex composition is predominated by the two Victorian dandies on the left featuring black top hats, Becker’s three houses rendered in robust shades of red, along with a plethora of greens, yellows and blues that recur throughout the painting, recall the blazing palettes of Henri Matisse and David Hockney.

So strange and yet so familiar in its reference to the history of art, the artworld and the echelons of bygone and contemporary societies, Becker’s gripping iconography in “The Collector’s Ranch” also recalls the pictorial language of Neo Rauch—an innovative visual language that is a synthesis of Surrealism and Socialist Realism. Accordingly, the whimsical, urban and suburban landscapes inventively fashioned by Becker operate as surreal theatrical sets, where depictions of real and imaginary actors and artworks enact preoccupations simultaneously inherent to the ontology of human existence and primeval inquiries of artmaking. 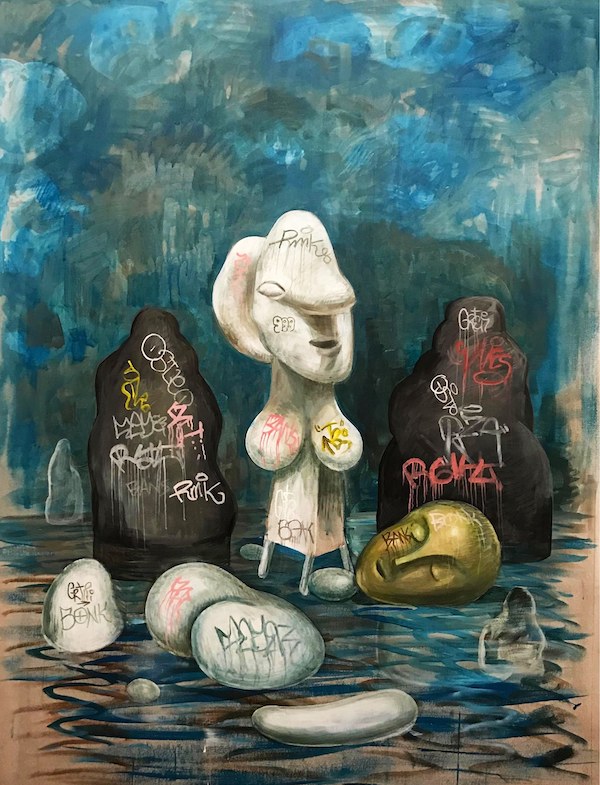 The perceptively formulated and compelling paintings of Becker expansively synthesize the historical and fictional, solipsism and irony, persistently sublimating such verbal compartmentalisation into pictures for the viewer to interrogate and liberally unfold. Becker’s “Midnight at the Mini Golf”, (Top Photo) a painting dated 2020, portrays the notorious, ironic and undeniably amusing furniture piece “Table” of Allen Jones, produced in an edition of six in 1969. In this intriguing painting, the sculptural furniture of Jones appears on a graffitied boulder that acts as a plinth within a biomorphic golf course. Here the whimsical backdrop is a surreal, starry sky rendered in shades of midnight blue and accentuated by heavenly bodies in bright red. Yet the femme fatale of Allen Jones has become paired with an armless male mannequin in the foreground, at once neutralizing outmoded definitions of gender and forging a multivocal pictorial representation of taxonomies of gender. In Becker’s paintings, the ersatz doppelganger and singularity operate inseparably so as to usurp reductive readings of the self.

A number of self-portraits executed in 2019 and 2020 as part of a larger cycle with diverse themes reveal the artist’s undeniable conviction in the possibilities of figurative painting, whereby references to modern and contemporary works of art often triangulate aesthetic artifacts, selfhood and primordiality.

A cultic aura overlooks the diaphanous backdrop of “Still Life” (2019-20), where the gestural brushwork in shades of teal and blue-green is in captivating dialogue with so many of the enigmatic paintings of Paul Cézanne, such as “Château Noir” (1903-4) of the Museum of Modern Art in New York. Though the themes, mediums and factures of these two paintings thoroughly differ, one connection between them is the viewer’s tenuous temptation to detect mirages of uncanny, semi-human and semi-animal forms that lurk throughout the trees, architecture and sky within Cézanne’s painting and across Becker’s backdrop, where cryptic, “secondary images” are potentially present.[1]

Whereas the background palette of “Still Life” also evokes the upper sector of Cézanne’s “Portrait of a Peasant” (1904-6) of the National Gallery of Canada in Ottawa, the films of colour of Becker bring to mind the “secondary images” of Cézanne that we find, for example, in “Rocks Near the Caves above the Château Noir” (circa 1904) of the Musée d’Orsay in Paris. Just as anthropomorphic suggestiveness runs through this cryptic landscape of Cézanne, abstracted heads appear to be seething across the blue and green background of Becker’s “Still Life”, a painting that slyly deconstructs the genre denoted by its title, multiplying semantic possibilities. Through the depiction of faces, Becker’s picture expands the traditional topos of still life, incorporating portraiture. Defamiliarizing and reconstituting such genres through contents lifted from the history of art and unwavering experimentation with the fluidity of acrylic paint that generates rhythmic brushstrokes in tandem with curvaceous shapes, “Still Life” manifests a polyphony of Bakhtinian signifiers that negotiate the formal rigor of volumetric illusion of the totemic figures and the reality of flatness of the stretched canvas in the foreground.

Within the middle ground of this fictive landscape of Becker stands the rendition of a sculpture that signals at Picasso’s 1931 “Bust of a Woman (Marie-Thérèse)” and 1932 “Head of a Woman”, both executed in Boisgeloup, France. In Becker’s painting, however, the unwilted and partly deliquesced graffiti marks scripted upon the bust and the surrounding sculptural forms convey the primeval frenzy of Jean-Michel Basquiat, transforming the imaginary seascape into a theatre of modernist and postmodern iconography. The graffiti inscribed upon the boulders here are indeed direct references to Dan Colen’s totemic, papier-mâché sculptures, such as “Untitled (zippideedoodah)” of 2006 that is currently housed in the permanent collection of the Whitney Museum of American Art in New York. Lying on the ground to the right of Picasso’s sculpture is yet another art-historical allusion: the “Sleeping Muse” (1910) of Brancusi of the Metropolitan Museum of Art, a bronze cast based upon his marble rendition of the model Baroness Renée Irana Franchon. Yet now Becker has provocatively converted the “Sleeping Muse” into a dormant self-portrait. By encapsulating paradigms of modern and contemporary art, Becker’s “Still Life” resolutely embodies a tribute to unending surrealism that overlaps imagination, the unconscious and a historical inventory of art.

Since the experiential route of the observer confronting these paintings is as open as the mind’s eye, the pictorial settings and figural depictions of Noah Becker give rise to the sense of existentialist, labyrinthine timbre we find in “The Library of Babel” of Jorge Luis Borges. “Perhaps I am deceived by old age and fear, but I suspect that the species—the unique human species—is on the road to extinction, while the Library will last on forever: illuminated, solitary, infinite, perfectly immovable, filled with precious volumes, useless, incorruptible, secret”.[2] Such is the paradoxical, schizoid pessimism through which Borges laments the inevitable loss of the human self, only to reciprocate it with glimmers of faith innate to an allegorical library. For Noah Becker, the dichotomy of suspicion and trust lies within the pictorial, frequently peppered by graffiti inscribed upon the surfaces of sculpture and boulders that punctuate his suburban vistas and rural sceneries. These referential and self-interrogative paintings of Becker attest to the enduring power and emancipatory possibilities of painterly figuration that is crafted deftly, hesitantly, assuredly and incomparably through the medium of acrylic on canvas.

Noah Becker is an American and Canadian artist and jazz saxophonist who has been based in New York City for the past twenty years. His paintings have been exhibited at art institutions worldwide, including the Vancouver Art Gallery in Canada. Aside from his visual art production, Becker publishes Whitehot Magazine, an art journal featuring writings by art critics such as Donald Kuspit, Anthony Haden-Guest and Phoebe Hoban.