While Touring around Paris attending the 44th edition of FIAC at the Grand Palais, Zoltan Alexander encountered countless art exhibitions throughout the city. 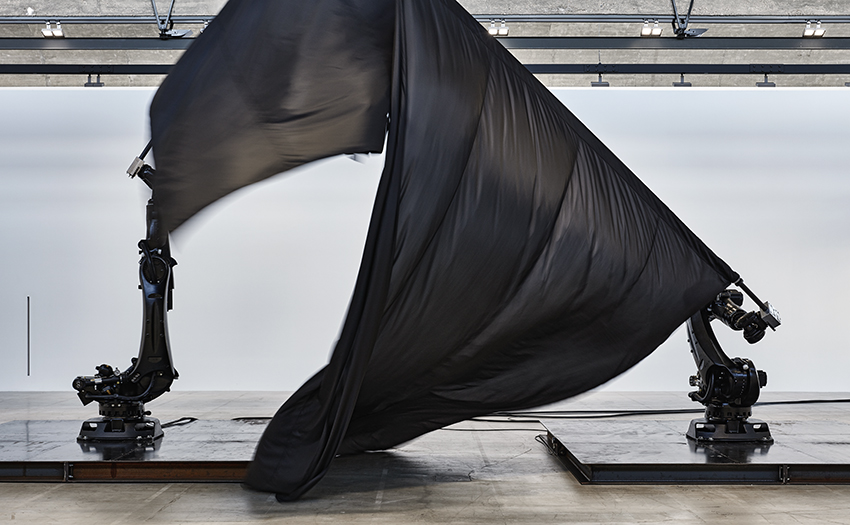 During one Sunday afternoon, the Parisian art world left Paris to embrace William Forsythe’s installation at the Gagosian gallery in Le Bourget. Forsythe is a radical innovator in choreography and dance, and in the course of his singular career over four decades he has redefined the praxis of his field and exerted unparalleled influence on subsequent generations of artists, as well as an open-access to digital platform and improvisation. He developed groundbreaking choreographies and had intensively worked on installations, the poignant film works and interactive sculptures that he calls “Choreographic Objects”.

Gagosian Le Bourget, located on the grounds of an active airport provided an ideal context for Forsythe’s installation. He exhibited thrilling, black, nylon flags, a 28-minute duet for two industrial robots coming together in parallel, synchronic action, then separated and digressed; when they eventually found unison again.
Besides the flags Forsythe has created a video installation “Alignigung”, in collaboration with two dancers, Rauf Yasit and Riley Watts, grasping each other in complex entanglements, generating an optical illusion where it is difficult to determine where one body ends and the other begins. 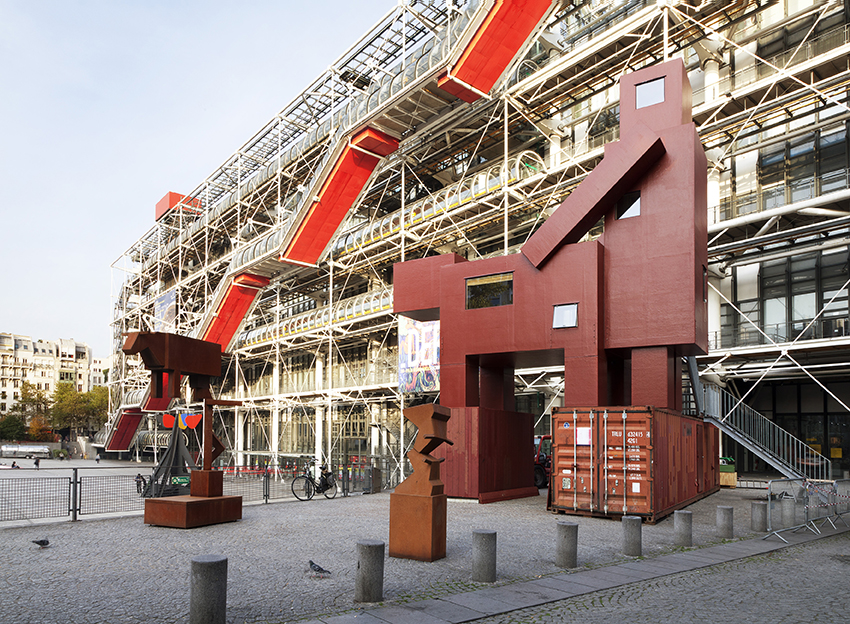 The monumental, 12m high geometric block sculpture-architecture that was reminiscent of the first video games, evoked a couple in a doggy style position. The work is a reflection on how civilisation has lost its way. The “Domestikator” was always intended to be a catalyst for thought, as it addressed the serious issue of domestication, of how humans employ technology, like artificial intelligence, genetic manipulation, robotics and industrial farming, still without much understanding, policy or regulation to govern this increasingly intrepid behaviour.
Joep van Lieshout hoped that his work would generate questions and dialogues around the complexity of the issue of domestication. According to the artist, this is “an allegory of the rape of nature by man”. Soon after the installation, the Animal Protection Company requested the immediate withdrawal of the work, which, for them, represented “an act zoophile openly claimed by its author”.
For many years, Carpenters Workshop Gallery has been committed to ensuring that the artists they support receive the recognition they deserve. The gallery, based in Paris, London and New York, always gave opportunities to its artists to express themselves. In Paris, they have provided the installation and all technical means needed in record time.

The Fondation Louis Vuitton presented in its Frank Gehry-designed building, an exceptional exhibition devoted to the collection of the Museum of Modern Art of New York. The exhibition highlighted the pivotal role that MoMA and its exhibitions have played in the history of art in the 20th and 21st Centuries. The museum has chosen the Fondation Louis Vuitton as its partner to bring its legendary artistic heritage to Paris, showcasing its mission to be perpetually modern. The exhibition draws together a superb representation of the highly important artworks that MoMA has acquired since its founding in 1929, from American abstraction, Pop art and Minimalism to the most contemporary art.

A multidisciplinary selection presented masterpieces from Paul Cézanne, Gustav Klimt, Paul Signac, Pablo Picasso, Henri Matisse, Giorgio de Chirico, Edward Hopper, Marcel Duchamp, Francis Picabia, Alexander Calder, René Magritte, Willem de Kooning. Some of the work was shown in France for the first time such as Diane Arbus / Identical Twins, Andy Warhol / Soup Cans, Felix Gonzalez-Torres / USA Today, Barbara Kruger / You Invest in the Divinity of the Masterpiece.
Bernard Arnault, the President of Fondation Louis Vuitton said: I wanted “Being Modern, MoMA in Paris” to fall within the tradition of our previous major exhibitions, to mark our desire to provide the widest possible audience with the opportunity to engage with some of the world’s most remarkable works of art. 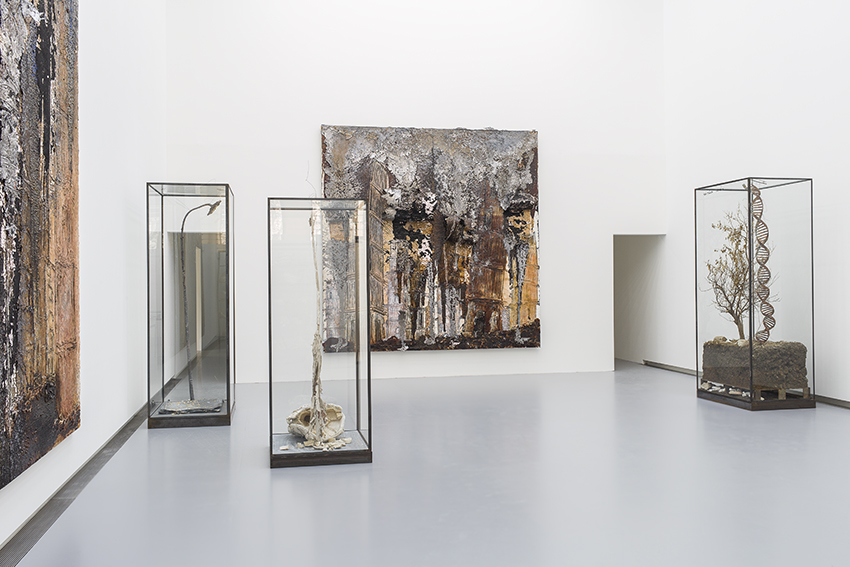 In the museum’s magnificent space the exhibition started with the presentation of Anselm Kiefer’s vitrines, exhibited in Paris for the first time. Kiefer strived to understand the legacy of the past and, for this exhibition, embraced the sculptor’s world. Like Rodin, he is an artist who constantly experiments with different combinations of forms and is interested in materials, bringing together elements of various natures and provenances. Each of his extraordinary vitrines is an ode to mystery, an invitation to enter a poetic world. Inspired by Rodin’s work, Kiefer arranged in his vitrines elements and materials and was waiting patiently for what he called the “spark” to result from these metamorphoses. Kiefer was similarly fascinated by Rodin’s sculpture moulds, but more by the mysterious effect of the imprint.
Kiefer is an artist-alchemist who saturates his material with pigments. In his paintings layers are broken up, areas of thickness are worked and worked again. Wounded yet triumphant, Kiefer’s blackened “Cathedral Towers” aroused with grandeur from the oppressive, earth-toned materials, heralding blossoming and rebirth. 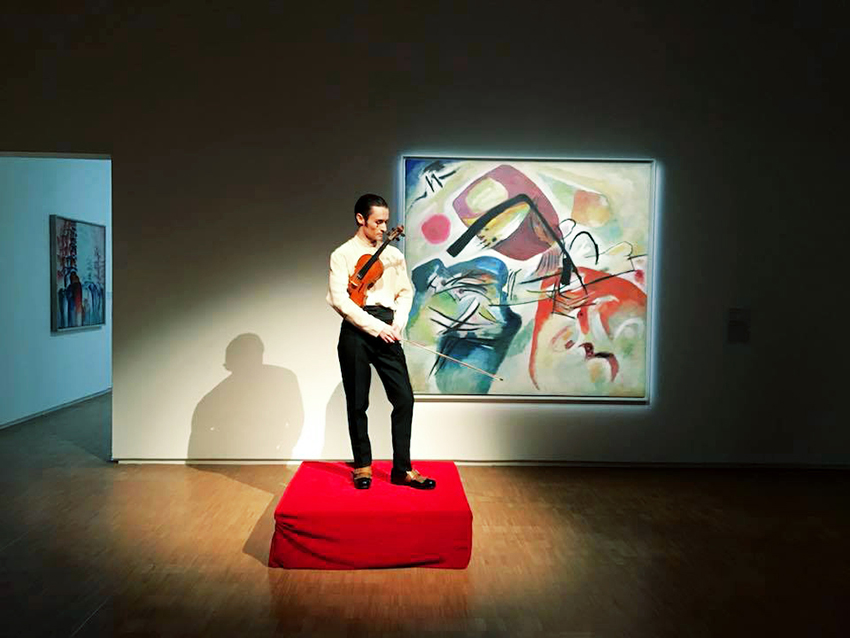 Last week the Centre Pompidou celebrated its 40th anniversary throughout the whole country under the organisation of Serge Lasvignes, the President of the Centre Pompidou. In Paris, Francesco Vezzoli took over the museum’s spaces with “Opera Pompidou” and created an extraordinary series of mini live-performances collaborating with the Académie de l’Opéra National de Paris bringing their singers to selected paintings, Elvis to Warhol, opera excerpts to Picasso, Kandinsky, Otto Dix. Costumes were created by Prada, and during the after-party, Catherine Deneuve and Carole Bouquet mixed with the DJs.
Meanwhile, a floor apart, one could still visit the retrospective of David Hockney, the exhibition we highly admired in London at Tate Britain.

It depends, of course, what you are into, a teddy-bear “ménage à trois” (well, technically a “ménage à quatre”), velvet curtains or emerging hands from walls.
The third edition of the youngest art fair, Paris Internationale took place in a vastly different environment from the previous edition at the Hôtel Particulier Léna, and housed fifty-five galleries in a multi-storey raw car park, at rue Béranger, once the mythic HQ of national newspaper Libération, founded in 1968, by Jean-Paul Sartre.
Paris Internationale this year continued to support a young generation of galleries and artists. Responding to the current climate of art fairs regarding artistic reception, Paris Internationale created a joint initiative of five emerging galleries – Crèvecoeur, High Art, Antoine Levi, Sultana and Gregor Staiger – as a collective attempt to develop an appropriate model for fostering new advanced initiatives in contemporary art. 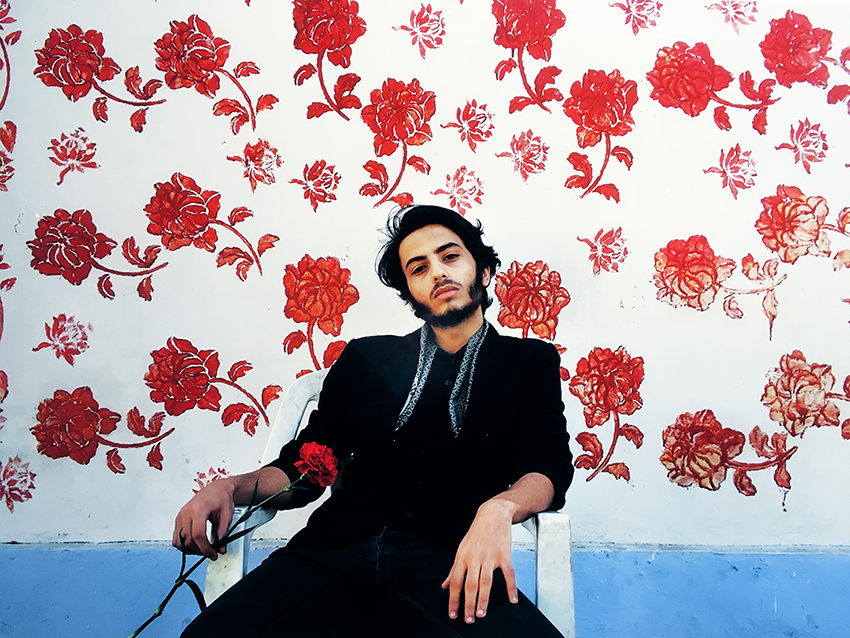 The Institut du Monde Arabe with the participation of the Maison Européenne de la Photographie presented the 2nd edition of the Contemporary Arab World Photography Biennale, where Tunisia and Algeria were in the spotlight. Strong with the success of the first edition in 2015, the two institutions were pursuing the exploration of contemporary photography in the region. The mixture of cultures and sensitive dialogues were at the heart of the Biennale. A tribute was also made to the tragically disappeared Leila Alaoui. The Biennale crossed conceptual approaches, poetic and documentary works.
French photographer, Scarlett Coten was exhibited who, in 2016 was honoured with the Leica Oskar Barnack Award for her project “Mectoub”. Through her work, she questioned the roles and the image of men in the Arab world. Her portraits drew attention to the discrepancy between social conformity and individual longing and looked into male identity. Her portraits explore the men of the region in a deeply personal way, interweaving portraits and places. She played with the idea of both staged and documentary while blending testimony with intimacy.

The Studio des Acacias by Mazarine is not a typical art gallery, it is an exceptional and experimental open space for artistic creations, both in photography and video installation. For seven precious days, the studio devoted their space to Benjamin Millepied and Barbara Kruger for “Reflections Redux”, a fine collaboration between French dancer, choreographer, former director of Paris Opera Ballet and the celebrated American contemporary artist.
The founder of the Studio, Paul-Emmanuel Reiffers created a new kind of experience, combining holographic dance projections, film and scenography on an unprecedented scale. The creative director of the scenography was Olivier Massart. In the heart of Kruger’s immersive typographic installation, the dancers of the LA Dance Project appeared as holograms to perform highlights from the ballet “Reflections”, originally based on Balanchine’s famous piece “Jewels”.
A striking visual atmosphere and intense emotions were present. Amongst the honoured guests Paul-Emmanuel Reiffers, Haider Ackermann, Isabelle Adjani, Jérôme Sans, Emmanuel Perrotin, Babeth Djian, Kamel Mennour attended the opening.

In a few days, on 8 November, the international photographic art fair, Paris Photo will return to continue its annual tradition.