There’s seems to be more on than usual over August, partly due to a new trend for shows running July-September instead of putting on a new show in September ahead of the expectation of opening something else for Frieze week in early October. That includes big exhibitions chosen by race (SLG and Tate Modern), gender (White Cube Bermondsey – make sure you allow 20 mins to see Shana Moulton’s films) or sexuality (Tate Britain) – all worth seeing, though it seems a pity if that’s what it takes to see good representation of those groups… Other recommended paying shows are Gregory Crewdson at the Photographer’s Gallery, Alma-Tadema at Leighton House and Sargent at Dulwich as well as the ongoing Giacometti at the Tate (to 10 Sept).  ( Top Photo: Shana Moulton in Morning Ritual, 2016) 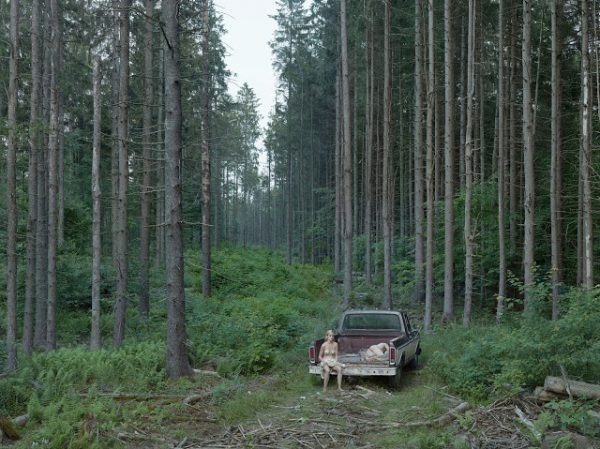 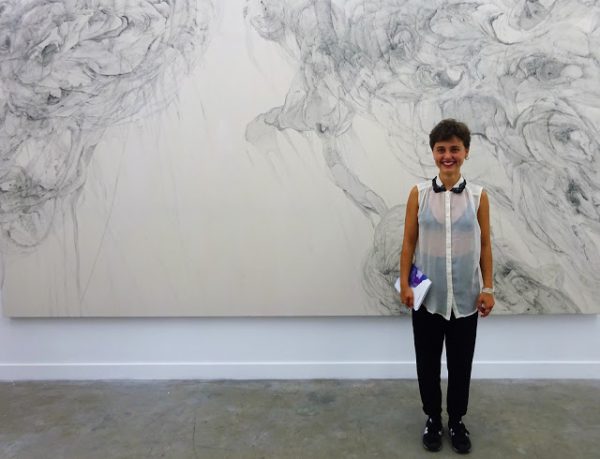 Odilia Suanzes with her Untitled, 2016 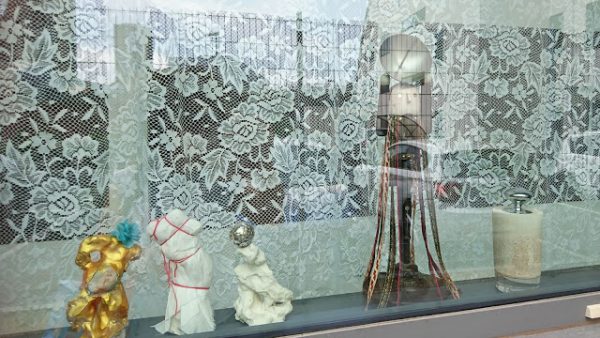 For a group show of artists who just happen to have had a studio at the Griffin Gallery complex, ‘In Residence’ is a surprisingly coherent mix, focused largely on the use of materials, with Thomas Platt’s sculptural puzzle figure plucked from an abstract painting and Odilia Suanzes’ vast graphite overdrawing of would-be-ephemeral traces particularly appealing. Even better is the series of witty riffs on the impromptu displays of kitsch objects in seaside windows, complete with lace curtains, in the project space viewable from outside. That includes several interesting  painters – Adam Dix, Sasha Bowles, Neil Zakiewicz, Darren O’Brien – coming out as sculptors, though in O’Brien’s case his ham sandwich keeps one trotter in the double-sided painting camp.  It’s an entertainingly varied sequence, with pandas, Bismark, a stuffed ermine and Roland Barthes’ love of Crème Caramel all featuring. 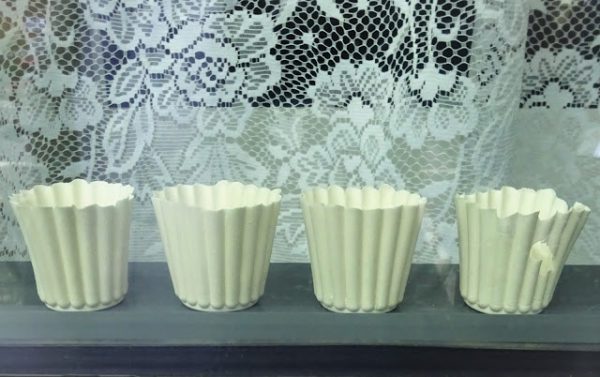 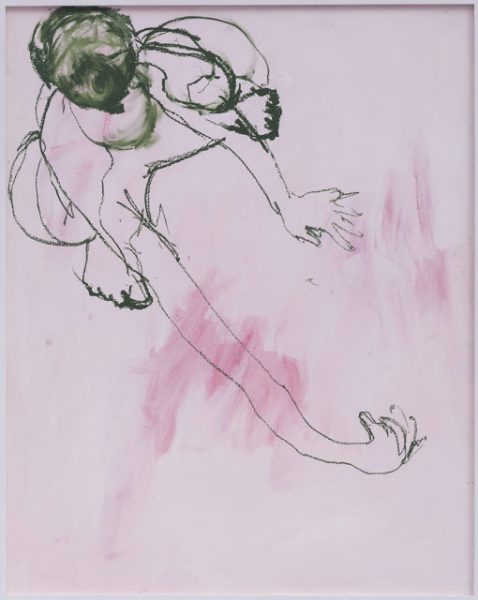 Florence Peake: WE perform I am in love with my body @ Bosse & Baum, Unit BGC, Bussey Building, 133 Rye Lane – Peckham

To 8 Sept (by appt in Aug):  www.bosseandbaum.com

It sounds too easy: simply to draw around the movement of your own body on the floor, like a selfie version of the police at a murder scene, then raise the result to the vertical. There again it seems too hard, because the last thing you want to look is dead.  Dance-trained Florence Peake did just that in her studio, and the outcomes are much more lively and surprising  – including one view from above – than I would have expected. She describes the process as ‘falling in love with the sensation of movement’, and that’s how it feels  as her falling actions rise up onto the wall. 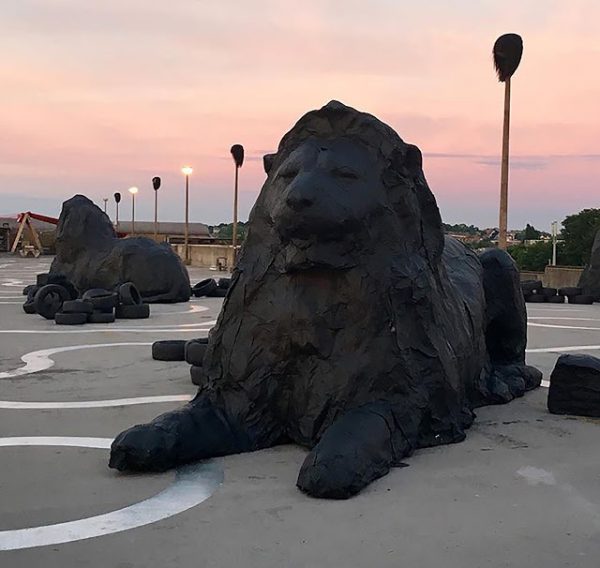 And while you’re in the area. pop into two unusual locations:the top of the Rye Lane multistorey, where this year’s BOLD TENDENCIES (to 30 Sept) brings Trafalgar Square to Peckam in the form of 2017 Ewa Axelrad’s Let’s go. Yes, let’s go. (They do not move); and the hair salon DKUK,in Holdrons Arcade off 135a Rye Lane, where Clare Price’s equally performative abstract paintings will envelop you (to 20 Aug). 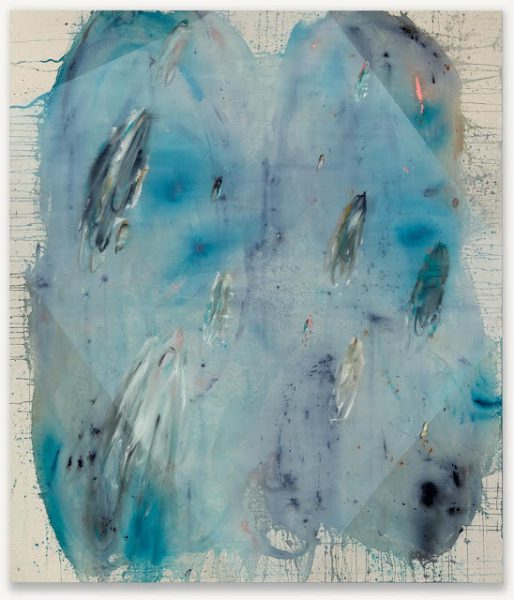 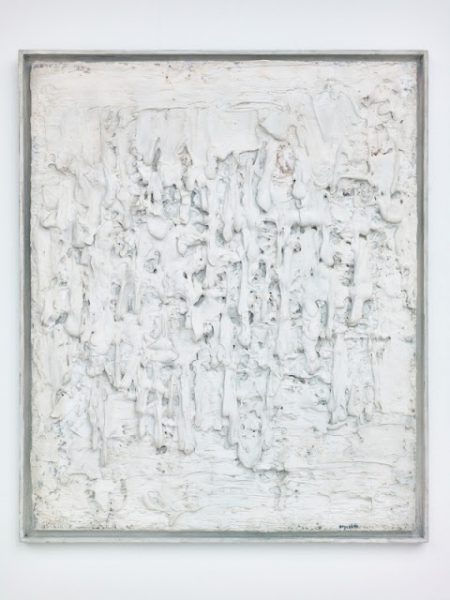 Charles Saatchi used to show his own trend-chasing exhibitions of what he’d bought over almost all of his four floors. Now half is taken up with various collaborations. That’s good at the moment: Saatchi’s own showy and uneven ‘From Selfie to Self-Expression’ is combined with Mexican photographer Narciso Contreras’s impactfully disturbing photo report on the people trade in Libya, and by the second ‘Salon’ project, which gives Vigo Gallery the chance to foreground Bram Bogart’s journey from late 50’s impasto gestures of abstraction to a mature style in which the stuff of paint is pushed towards a void of calm materiality – and all without the distraction of colour.

* Careful! The Saatchi Gallery is prone to irregular closures, so it’s essential to check the website before you visit 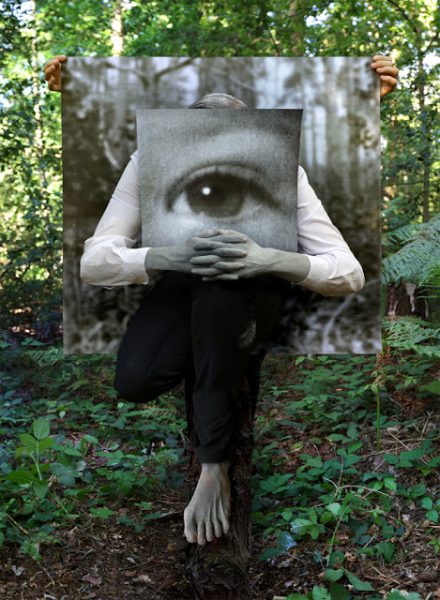 To 2 Sept: www. kristinhjellegjerde.com
Jonny Briggs: Untitled (self painted grey, cradling photograph of eye as a child, obscuring my own eyes, in front of backdrop held by partner), 116 x 85cm, Photograph mounted and box framed in black, 2016
I’ve followed these artists for a while (indeed I write the texts on their solo shows last year) and they weren’t an obvious pairing, but it turns out they play off each other very effectively, with various  visual and thematic echoes. Briggs co-opts his family into acting out elaborate not-as-fake-as-they-look psycho-dramatic scenarios as if trying to go back in time to alter how he was brought up.  Jokhova is more concerned with our communal place in time and what might mark it as permanent. Cairns, marble and Venice represent possible strategies, complicated here by such tactics as a prevalence of fake stone effects, the inclusion of video as a sculptural element, and building the classical out of cheese. This packed show is all worth thinking about – and is open steadily through August… 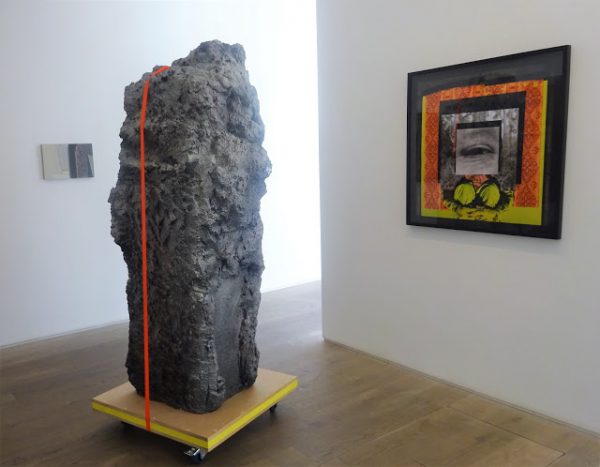 Installation view with Evy Jokhova’s Sisypha, 2017 A fake rock which is wheeled up and down the High Street daily 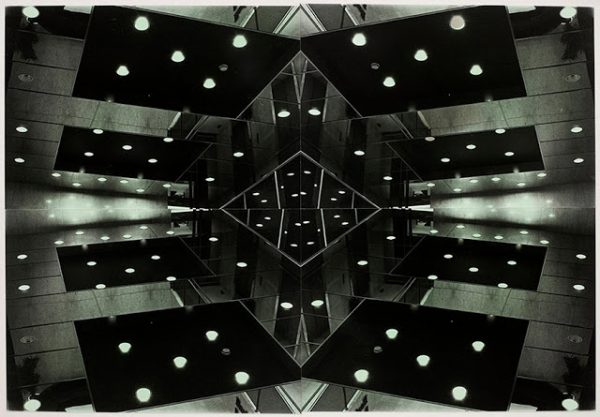 This sparkling conjunction unites six artists of disparate form who share an interest in the nature of urban space and how we engage with it: Tim Head renders corporate spaces uncanny through reflection and tinting; Abigail Reynolds opens windows onto time and cultural history by collaging book illustrations, their scenes  cut through to reveal the same place in an earlier year; Nathan Coley proposes that distressed sculptural housing blocks be used for political protest; Mike Ballard appropriates hoardings and derives paintings from wall textures; Melanie Manchot films parkour traceurs navigating Newcastle; and there’s an arrow-heavy ‘ontological painting’ by Keith Coventry in case none of that tells us where we are… 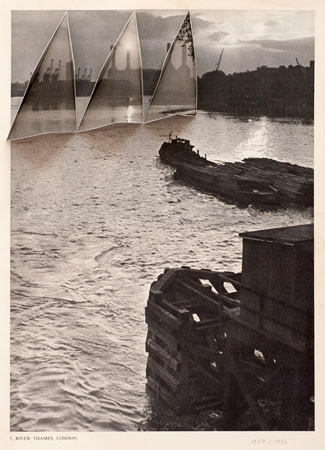 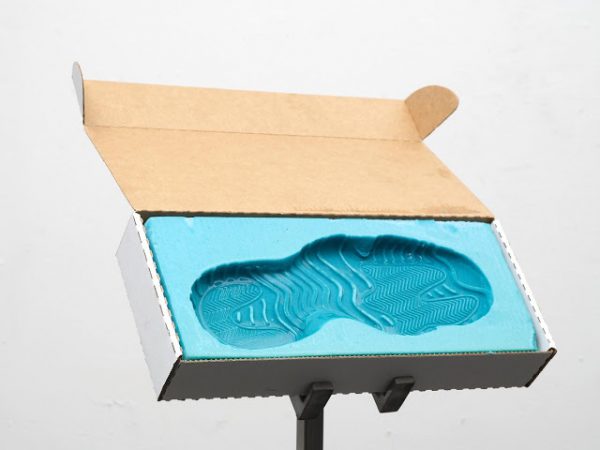 Flash back to 2013 and star American footballer Aaron Hernandez was arrested for murder on the evidence of the unique wear on the chevrons of his Air Jordan shoes. Ru O’Connell has form with investigating the influence of patterning on life (airplane seat covers, m’ lord, casino carpets and firefighters’ uniforms): his actions, too, have accrued a recognisable profile over time. Here he shows foam impressions of his own trainers, putting himself in the frame as the maker of plaster reliefs cast from their chevron patterns and shaped linen wallworks  printed over with same to constitute a rather soleful self-portrait as a moralist of decoration. 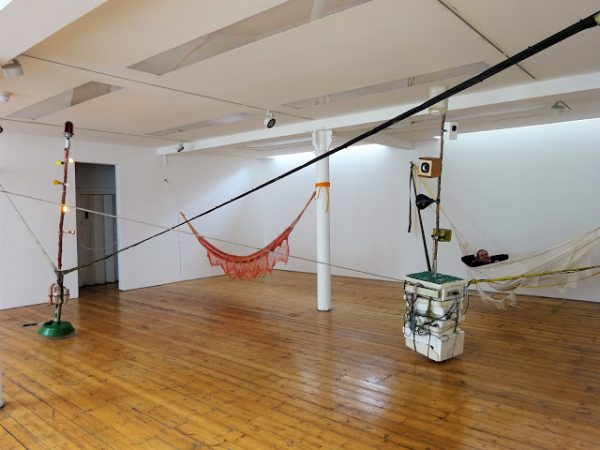 Installation view with hammock occupation
There was no shortage of art activity in London on the weekend of 1-2 July. Most of the East End’s Art Night activities ran six to midnight on the 1st: on 15 main sites with ludicrously long queues, and 60 collateral events more easily accessed. Further west was the ‘London Art Weekend’ (historic art in 42 galleries) and the Mayfair Art Weekend (exhibitions plus talks in 60 galleries with a more contemporary bias) – both, presumably, timed to coincide with the Masterpiece Art Fair. Phew! The Brazilian threesome Chelpa Ferro’s installation was best place to rest. Spaceman/caveman makes a virtue of the gallery’s columns to hang hammocks in a ramshackle sculptural environment in which you could feel the entropy setting in as 40 minutes of sounds sourced from the internet communicated (séance word) with and a primitive lighting to, in the show text’s words ‘rebuild genius gibberish to navigate, in a suspended improvisation, towards the present future’. 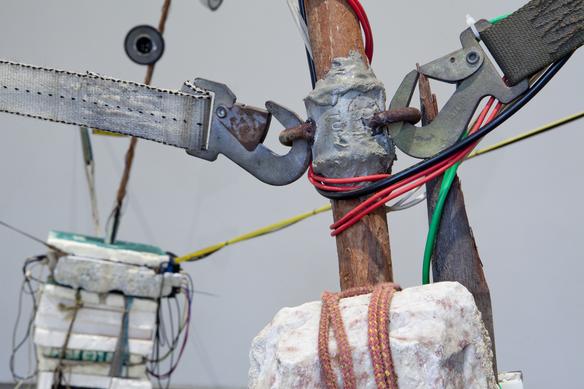 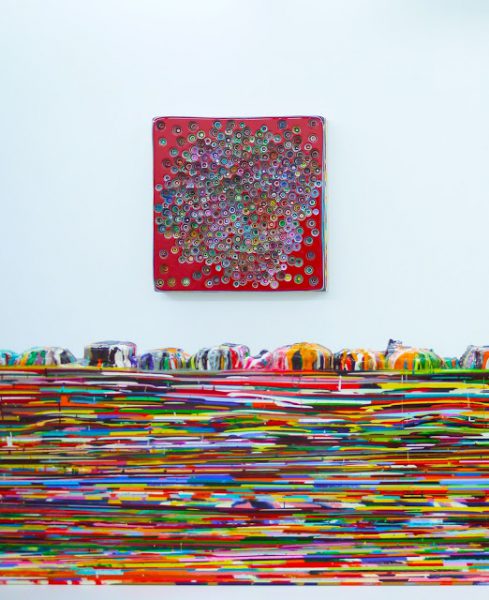 Bias alert: this is very like my own ‘Show Us Your Process’ (nine abstract artists including Jonathan Parsons with an emphasis on methods of making) only bigger and more international. 23 large works across four rooms combine the home gallery’s Parsons with guests from the excellent  Taubert Contemporary in Berlin. Markus Linnenbrink shows his poured colours (sometimes cut away to reveal the layers) together with the sculptural result of collecting five years of his drips in a perspex box as he works. Another room shows Beat Zoderer squaring a circle by folding it,  flattening another into something quite other, and using unfolding in his Fold and dip series.. Adrian Esparza unpicks a Serape which takes on a slightly ragged anti-minimalism when woven geometrically between nails on a white wooden framework. Nor are  Joachim Grommek, Jan van der Ploeg, Markus Weggenmann and Parsons himself merely making up the numbers… 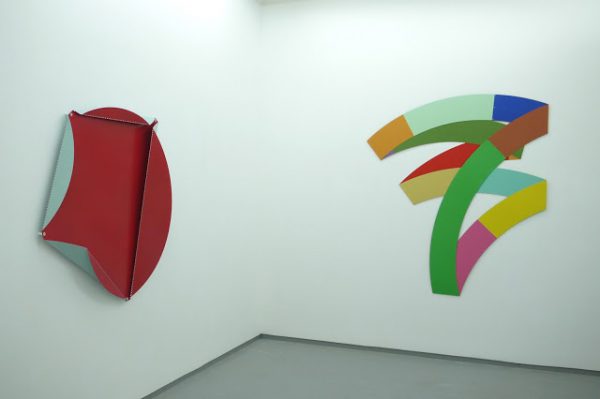 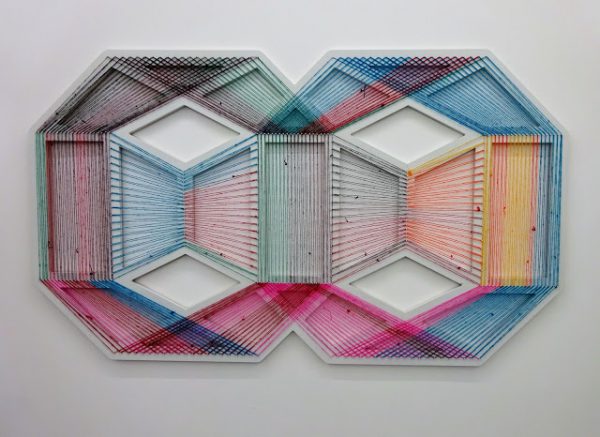 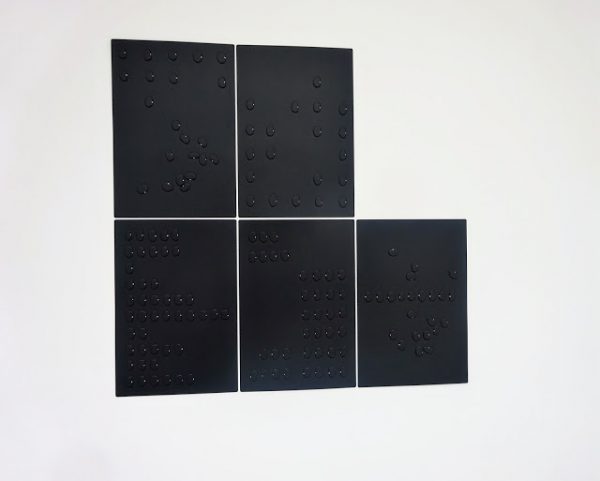 As an accountant who has seen a lot of art, I can testify that – for the best, I suspect – accountancy rarely features in the art. An exception is Gabriel Kuri’s cunning orchestration of clashes between the formal and the functional, the inchoate and the structured, the industrial and the organic, the man-made and the natural. The series of ‘Quick Count’ vacuum formed panels of bean shapes refer to the ‘bean counter’ nickname which we accountants rather dislike – and disrupt that lowly description of the function by falling out of order into disarray. Then there are five steel cubes, their minimalism disturbed by such incursions as a rather realistic rubber lettuce and – in ‘Box for Four’ – rolls of bank notes ready to be counted (or, they being Euros, counted out?). 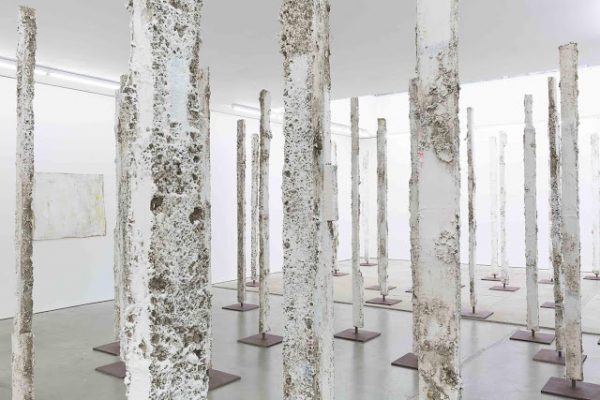 To 12 Aug: www.edelassanti.com
With all the Giacometti up in London at the moment*, it’s hard not to find an echo in Jodie Carey’s gallery-filling installation of 50 spindly figure-surrogates. But of course, there’s a lot more to both artists than attenuation. Carey made her earthcasts by burying timbers from the historically resonant source of the V&A, and replacing the wood with plaster – accepting the many contingencies caused by relative ground wetness, soil type and local matter, and adding some of her own such as the cut-aways and flecks of rainbow pastel. Wandering through the forest of casts makes for fascinating variety-in-sameness along with the references to nature, burial, rebirth, ritual… and maybe even Giacometti.
* Tate Modern, Thomas Gibson, Gagosian Brittania Street
___________________