What with all the mass shooting and hurricanes, Trumpery and Brexiting I thought there might be significant trauma at Frieze this year. Not so: if there’s a trend in that respect, it’s more subtly implied and harder to pin down.  But yes, there is interesting work to make you anxious if you are that way inclined… 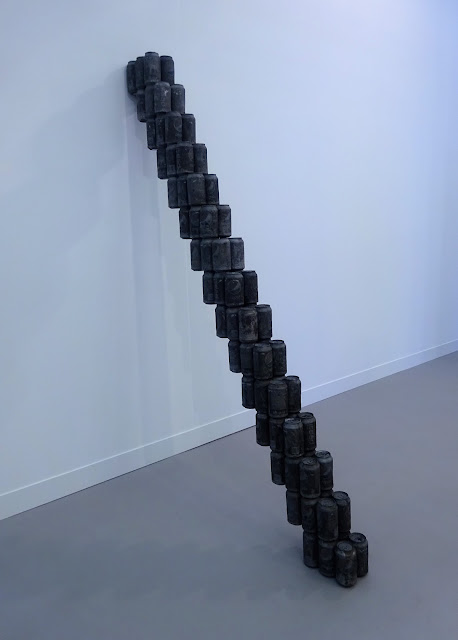 Kaari Upson’s mother – the title’s acronym stands for ‘My Mother Drinks Pepsi’– used to sigh with over-ostentatious pleasure after consuming her favourite drink. Upson – who tends to deal with emotional traumas and uncomfortable intimacy – found that an alienating trigger for the psycho-drama of mother-daughter relations. Hence, I assume, the childhood nail-biting alluded to in the title. Upson pours aluminium into Pepsi cans, so that container and content amalgamate, burning off the can’s colours from the inside. 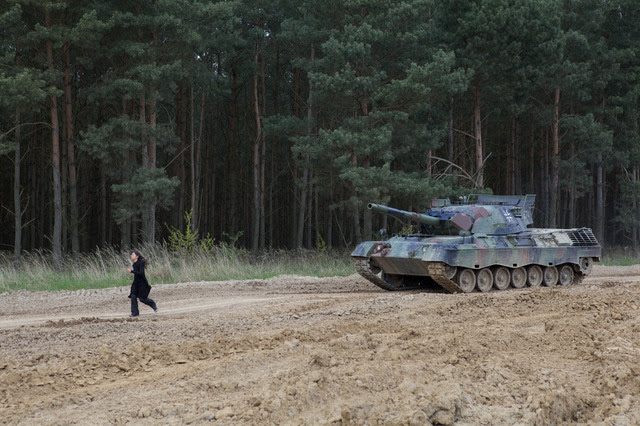 Regina Jose Galindo typically challenges both herself and her viewers through extreme actions which draw attention to the violence and injustice built into power relationships. This is only a nine-minute film, but is taken from nine hours which the artist spent fleeing a tank, and the effort and distress involved are plain to see. What drove her? The film was made for Documenta, and features a  German ‘Leopard’ tank from World War II, so critiquing the extensive supply of arms from German manufacturers to Galindo’s high murder rate home nation of Guatemala. 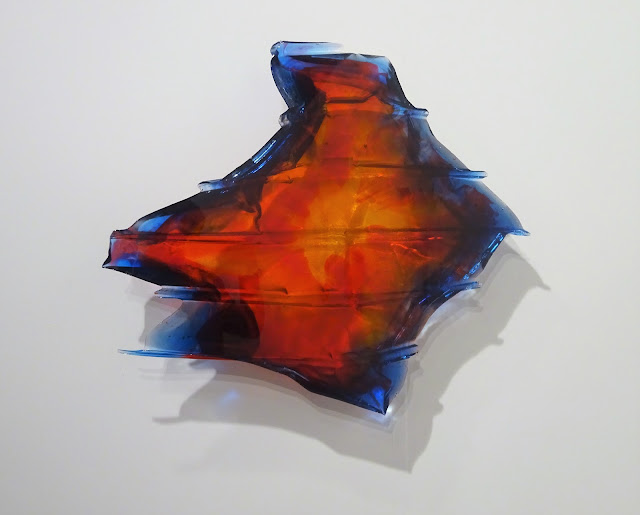 Even as you wonder what they are, Berlin-based Romanian artist Daniel Knorr’s seductive wall-based resin sculptures flicker between sickly sweet and poisonously sickening. In fact, he starts by pouring  polyurethane into a pothole, explaining why we see a flat ‘screen’ backed by swelling shapes suggesting an inner life behind. For Knorr, the cracking of road surfaces combined with an absence of repair work –  which combines to make potholes common – are signs of neglect and crisis in society. The beauty draws us in… 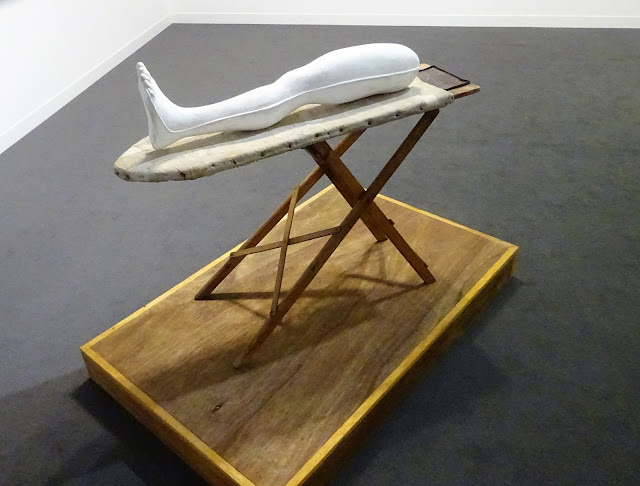 Subversive veteran Stuart Brisley spoke into a hidden microphone in this prosthetic or amputated leg; a plaster performance object said to be that of the then-octogenarian Louise Bourgeois, during a narrative which followed on from his story ‘Legs’.  To quote the reflexologist character’s analysis in that: ‘I am confident that Louise was in harmony with herself, as her feet were so responsive… though she along with her family were reputed to have eaten her father for dinner when they were living in Paris, I am not convinced’. The ironing board setting makes sense, given the significance of clothing in Bourgeois’ life and art… 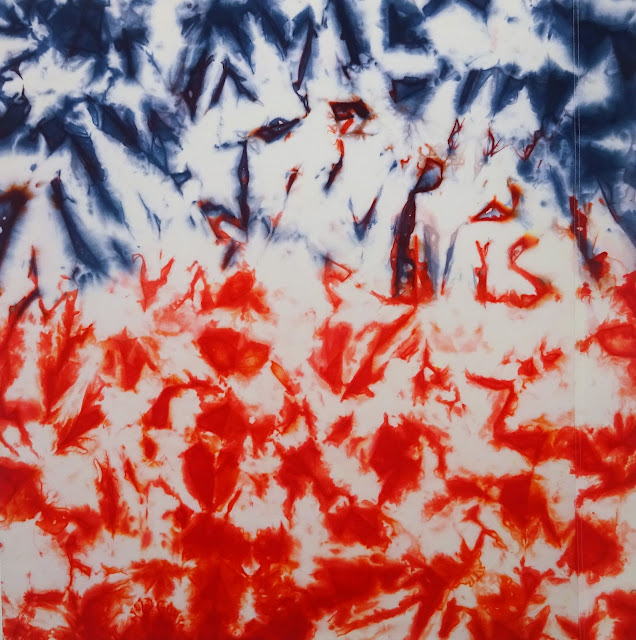 Poitr Uklański made several riffs on the American flag in 2012, in the context of his own status living between Warsaw and New York and of his work previously referencing the Polish flag.  They seem timely now given the fracturing in the flag’s assumed power to unify and instil pride. Uklański’s method builds in a clash between counter-culture and establishment, as the colour results from the archetypal hippy technique of tie-dying onto cotton. That is then sewn onto canvas, often with the stitched seams visible so that – to return to metaphorical mode – you can see the joins. 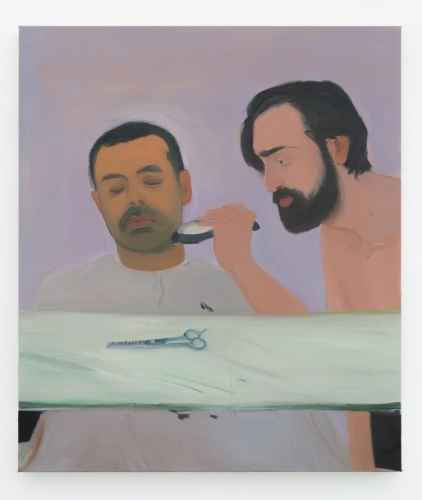 Amsterdam-based Cheng Xinyi, originally from the South Chinese river city of Wuhan, shows paintings of men in barber’s shops, revealing interests both in hair as a sexual signal, and in how the vulnerable the customers seem – irrespective of their status – in this context. It’s hard not to feel the client of this coiffure is potentially threatened by the razor, so much so that the scissors look more likely to be employed in surgery than in styling. And it’s Cheng’s French gallerist in the chair, so giving that tension between power and vulnerability an extra tweak. The Korean artist Minjung Kim is best known for her beautiful collages of red or black ink-washed paper which she delicately singes to make irregular edges, then overlays to form mountains. That playing on the meditative repetition of not quite fully controllable processes occurs here in simpler ink on mulberry Hanji paper, but before we get too lulled by the delicacy, it occurs to us that the snow is grey due to pollution. 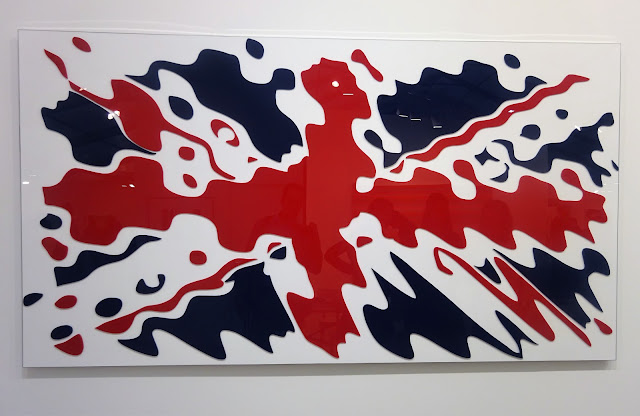 Returning to the prescient deconstruction of red, white and blue flags,  this is one of the last works made by the French artist Rayond Hains (1926-2005), whose oeuvre is exceptionally varied, far more so than his reputation for torn-away posters and giant matches would suggest. This is a Plexiglas series – made for a show in London –  which distorts the Union Jack in the spirit of his caricatures of such brands as Martini.  Shown now, it may suggest that the-the French are expecting current negotiations to have some impact on the shape of the UK. 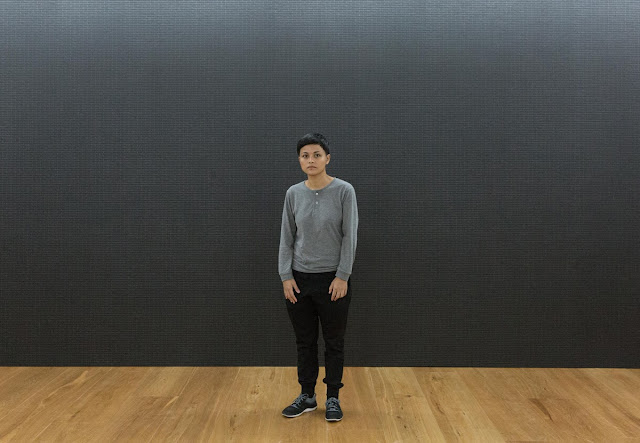 I’ve seen the work of Maria Taniguchi before: the Filipino always paints the white outline of small bricks on a dark grey ground, then shades most of them black but with varying brushstrokes and with a few dark grey to build up subtle infections. But whereas I’d seem portrait format, this is a landscape more than 15 feet wide, ramping up the dead end effect. No wonder her Japanese gallery had to fly what I’d guess to be 15,000 bricks into London rolled up, and stretch the canvas at the Fair. 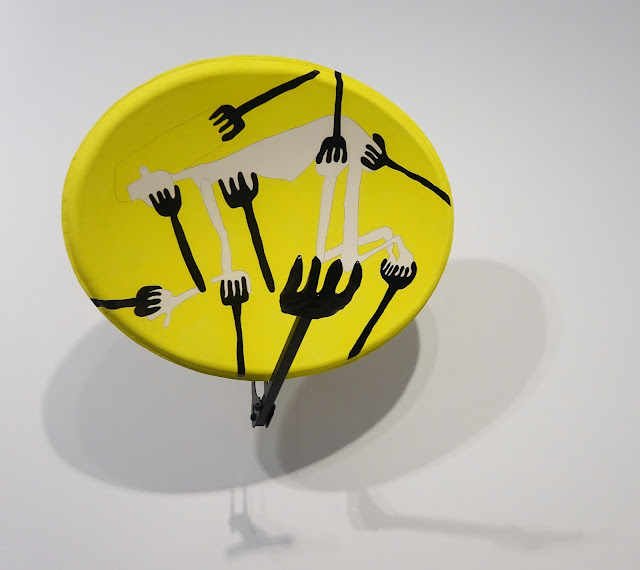 Recent Max Mara prizewinner Emma Hart’s stand of ceramic satellite dishes sold out fast, and their surface cheer and witty anthropomorphism no doubt helped that along, together with the simple delight of finding a new kind of dish made from clay. Yet such dishes are increasingly redundant, even were they not made useless by their material; they publicly indicate that something private is going on, which could stand in for many a trauma; and their   content – like all Hart’s work – carries plenty of scope for anxiety, from spilled drinks to multi-eyed surveillance to this figure’s seeming at once threatened and supported by forks.