For 20 years having spent many hours at the cramped, sooty, underground Penn Station in Manhattan waiting for trains to go Upstate to our country home, the new $ 1.6 billion Moynihan Train Hall is well overdue. However, I had not anticipated its quite extraordinary, impressive art installations. 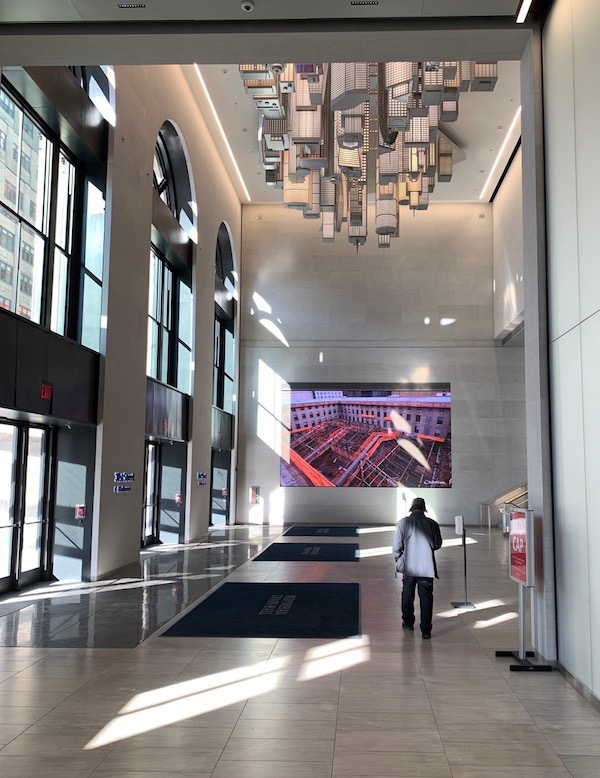 Artist duo Elmgreen & Dragset’s fantastical inverted cityscape is inspired by iconic buildings in New York City woven into architectural designs of their own invention. which hang like luminous stalactites from the 31st Street ceiling. This imaginary city, made with technological precision in stainless steel, is composed of 91 suspended model buildings in which 72,000 LEDs illuminate day and night – so successful.

But it’s when we come to the vast photo series by STAN DOUGLAS, 9 images in four 22- foot-long panels on the wall spanning the Waiting Room, that amazement coupled takes flight. Hearing him speak about his ideas, vast historical research, process and practicalities, is inspiring.

Working with a film crew to make photographs sounds peculiar – until he explains the mammoth undertaking. With a cast of 150 actors plus computer-generated imagery, he re-staged famous events that had taken place at Penn station over the years.

Beginning in 1914, when an African-American singer/film director instigated an impromptu vaudeville show with fellow performers stranded in the station during an epic blizzard, moving through 1924 to 1934 to WW2 years which saw so many heartbreaking farewells at Penn as soldiers left for Europe, Douglas’s state of the art technology reconstructed these historic, memorable events in the long lost, lamented and famous architectural palatial spaces of the famous 1910 McKim, Mead & White masterpiece of the original Pennsylvania Station.

In 1963 this icon was demolished, destroyed in an act of barbarism New Yorkers have never forgiven. When it opened in 1910 with its concourse longer than the nave of St. Peter’s in Rome, ceiling 138 feet high, grand staircase nearly as wide as a basketball court, it could be described as a beautiful Beaux-Arts modern metropolis. Douglas’s restoration, albeit in thrilling 3d photographic form, goes some way to compensate.

His panoramic black and white photographs were created during COVID. Everyone wore a mask until seconds before the actual shoot. Timescale was tight. “Ironically because so few films were being made we did benefit from availability of costumes, of actors, of cameraman etc,” he says.

Using archive photographs of the station interiors, he has created memorable images. The soaring spaces are breathtaking. I had heard much about this building and its wonders, but I never imagined how beautiful, how imposing it was. Its loss did of course spark the architecture conservation movement.

Stan Douglas, now 60, has a long illustrious career, exhibiting regularly at documenta since 1992 and also the Venice Biennale. He will represent Canada at the next Biennale – whenever that is! Born and still based in Vancouver, Canada, he has been unable to visit the finished installation due to COVID travel restriction. This may account for the terrible lighting, and the way everything reflects glaringly from his panels which are, surprisingly, ceramic ink on glass.

One impressive section shows Amy Johnson’s trimotor plane in the centre hall in 1930, another celebrates 1944 black railroad workers like the wonderful red cap porters still busy today, and a 1957 futuristic electronic ticket sales bureau. The cinematic quality of each scene revives these moments in uncanny detail. Penn was an architectural landmark that acted as a grand theatrical stage for human dramas.

Pennsylvania Station is today the busiest transit hub in the Western Hemisphere, with, pre-covid, over 600,00 daily passengers. It is still an underground rat run but at least the new waiting hall with new access to Amtrak platforms from Eighth Avenue in the old Post Office Building is a whole different experience to the awful quarters of old. How long it will take to upgrade the main underground station is unknown!