Peter Doig: White Canoe 1990/1: According to the critic Harold Rosenberg, writing in 1952: ‘At a certain moment, the canvas began to appear to one American painter after another as an arena in which to act…What was to go on the canvas was not a picture but an event’. In 1987 Michel Leiris suggested that the canvas was ‘a theatre of operations for the assertion of certain values’ rather than simply a pleasing picture. Cy Twombly, Jackson Pollock et al, spilt their pent-up energy in ribbons and ejaculations of frantic paint. When finished, their bravura traces left something of their essential selves behind like a stained bedsheet after a night of passion. But for those growing up in the 70s and 80s, Modernist abstraction began to seem suggestive of bourgeois idealism and macho mystification. According to Frederic Jameson a new mood – Postmodernism – could be identified by works that ‘abjure all pretence to spontaneity and directness of expression, making use instead of forms of pastiche and discontinuity’ (my italics.)

As the pendulum swung away from raw emotional revelation, many began to see the efforts of conceptualists, in the line of Du Champs, as ‘works of art’ that carried greater weight than painting. Rugged individualism in both economic and social affairs had become synonymous with the expression of an ‘unrestrained self’ that dominated culture. In reaction, artists such as Mary Kelly, Jenny Holzer and Damien Hirst favoured soiled nappies, graffiti, neon and sharks, over the autobiographical possibilities of paint. Again and again, painting – especially expressive painting – was declared dead. Postmodernism insisted that the goal of ‘originality’ so beloved by Modernism was a form of idealisation. That in so far as it had any meaning, it only did so because of its relationship to other voices. From the Enlightenment on there’d been a belief that art and science might, in some way, lead to moral progress, justice and human happiness, but the late twentieth century was to shatter such optimism. The aesthetic of Modernism was one of nostalgia and the sublime. In contrast, Postmodernism presented the unpresentable as a representation of itself. 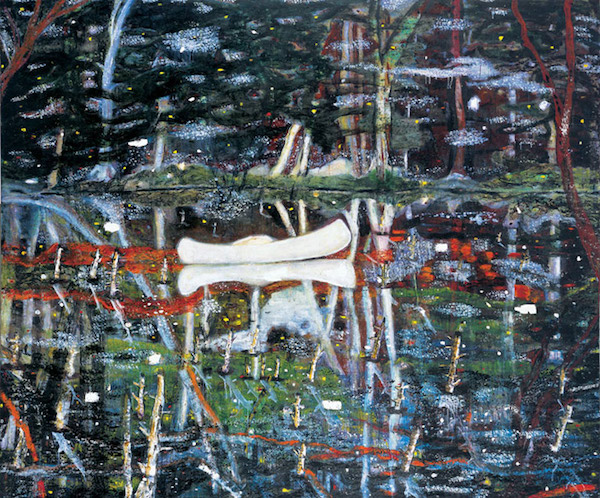 Eclectic, appropriating and promiscuous its only aim was to express itself in the now, picking up whatever it fancied from art history like a magpie collecting shiny bits and pieces.

Born in Scotland and raised in Trinidad and Canada, Peter Doig is widely considered one of the most renowned contemporary figurative painters of his generation. In 1991 he was awarded the Whitechapel Artist Prize followed by a solo exhibition at the Whitechapel Art Gallery. In 2007 his ‘White Canoe’ was sold at Sotheby’s for 11.3 million dollars, setting a record for a living artist. Doig, perhaps, more than any other painter of his generation has reclaimed painting in this fractured postmodern age.

Drawing on personal reminiscences and found images he has explored the slippage between reality, imagination and memory. The material properties of paint and the expressive possibilities of colour have been used to conjure the opaque, inarticulate sensation of remembering. Maintaining a thin line between abstraction, landscape and the figure, he’s appropriated photographic imagery to suggest remembrances that are both real and imagined. The photos he chooses aren’t he says ‘ always that interesting or distinguished. That’s deliberate – I like the fact they’re bland: they leave a lot of space for invention. Painting is about working your way across the surface, getting lost in it…’.

Among his most iconic and haunting paintings is White Canoe 1990/1, part of the series of ‘canoe’ paintings begun after leaving Chelsea School of Art in the early 1990s. While these works might, at first glance, appear to be of traditional subjects, a closer look reveals the diverse influences that have gone into their making. Not only film and photography drawn from popular culture, but the memories of a rural Canadian childhood. For all its seeming nostalgia and romanticism this isn’t a painting made lovingly en plein air in order to capture the inchoate within nature. Rather, it’s a self-conscious construct based on a still taken from the 1980s film Friday the 13tth  that shows Camp Crystal Lake at the end of a terrifying 24-hour emotional ordeal.

The canvas contains a single white canoe. Floating on tranquil moon-lit water, it seems to be carrying a single unidentifiable figure. It might be the Lady of Shalott, Ophelia or even a Viking hero. The scene is a magical and mysterious tapestry of paint and would be easy to read through a romantic, pre-Raphaelite lens, as a work that speaks of the isolation and loneliness of the individual. But look more closely and it’s a masterclass in postmodern painting. Here landscape – a traditional subject explored by the romantics as a way of accessing the ‘sublime’ – has been used to demonstrate a knowing understanding of the physical nature of paint. The reading is dependent on the viewer understanding the intended irony of the juxtaposition between the appropriation of an image from an American cult horror movie and the apparent tranquillity of a romantic image – a reflection on water.

Thus the painting isn’t an existential discussion about isolation but rather one that explores the works’ process of making and the viewer’s role in looking at it. The myriad reflections distort our understanding to create a dreamlike world in which we’re unable to arrive at a definitive meaning, as in Velasquez Las Meninas. In true Postmodern style, Doig plunders art history, including such diverse sources as Monet’s waterlilies, Pollock’s mark-making, and Richter’s own photographic appropriations. The ripples and stitches of paint, the veiled layers and splotches of impasto speak not of a lost human psyche but of the nature of painting in the 21st century: the limitations of a flat canvas and the immutability of paint. This, then, is less a painting that addresses the heart but one that knowingly speaks to the eye and the mind, reminding us of the seams of understanding from both the artist’s craft and the history of painting that have gone into its making.

Sue Hubbard is an award-winning poet, art critic and novelist. Her latest novel Rainsongs is published by Duckworth and Mercure de France.