A central member of the group of young artists to emerge from the Glasgow School of Art during the 1980s dubbed the New Glasgow Boys, Peter Howson has become one of his generation’s leading figurative painters. Exploring issues of social deprivation and environmental concern, the New Glasgow Boys – Steven Campbell, Ken Currie, Stephen Conroy, Adrian Wisniewski and Howson – painted works of epic scale and reach in establishing a bold new figurative style in Scotland in the 1980s.

I am not despairing of humanity. I want my paintings to reveal to the onlooker the folly of believing in some kind of scientific utopia that we are all heading towards – PH

Howson’s focus on the culture of working-class Scotland has broadened over the years to explore universal themes of conflict and destruction, human suffering and redemption in imaginative and apocalyptic portrayals of contemporary society. Strongly influenced by witnessing the brutal and personally harrowing realities of combat as an official war artist commissioned by the Imperial War Museum during the Bosnian War in 1993, Howson’s paintings on contemporary social and political themes have since been founded on increasingly nightmarish visions of chaos and atrocity. In Acta Est Fabula (which translates as ‘The play is over’), his current exhibition with Flowers Gallery, Howson uses his apocalyptic vision of violence and inhumanity to explore his fears of contemporary radical right-wing politics. 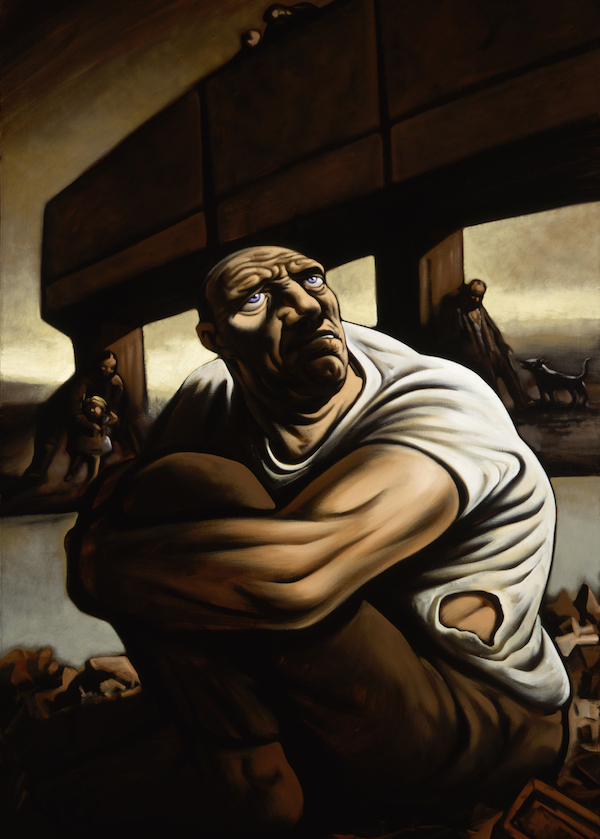 Howson is unusual among mainstream artists in his unashamed use of traditional religious iconography and application of a Trinitarian framework to his artistic practice. Although he does not shy away from the role that Christianity plays in his life and work, the religious overtures of his work are preceded by confession, as intimate details of his familial and spiritual relationships punctuate the parables of his imagination.

He is, rightly, reluctant to speak of his work in ways which could take away the mystery and wonder of art. He makes no claim to be an intellectual or a great artist and speaks simply of taking what he sees and using his imagination to then create an image on canvas or paper. He says he is “convinced that the medieval church got it right, with its emphasis on image rather than words.” In his understanding art is both therapeutic and redemptive as “the terrible beauty of ‘The Isenheim Altarpiece’ would have been not just a comfort to the diseased, but a road to redemption as well.” That, he feels, has always been his function in life too, with apocalyptic warnings shining light on the redemptive road.

JE: Your current work – I’m thinking of ‘Siste Viator’ in particular – appears apocalyptic in nature. You’ve created work previously based on the Book of Revelation, which, as originally written, used apocalyptic imagery to speak about the persecution faced by the

Early Church in the Roman Empire. To what extent are you using apocalyptic imagery to explore current issues such as the rise of populism?

PH: My use of apocalyptic imagery is to show people the reality of living in troubled times. It’s to wake us all up, and it’s also to give us hope.

JE: Several of your most recent images seem to echo characters and postures that featured in your early work as it explored toxic masculinity. To what extent are these recent images contiguous with your early work and where are the divergences? I wonder, for example, whether one divergence might be that the characters depicted in ‘Seht Ich Mache Alles Neu’ are clearly identified as being English.

PH: I don’t know whether I answer correctly when I say that I am always casting old characters in new scenarios, and a lot of these characters are English. I came up to Scotland when I was four years old, the Scots bullied me at school, and I started to detest all things Scottish. Gradually though, I started to change, and my view of the Scottish people changed from dislike to love. I see the Scots as being extremely creative, the English much less so. It’s not that black and white, of course. Blake was English, but he was an outsider.

JE: Your work exploring the violence inherent in toxic masculinity seems to walk a tightrope between identification and repulsion. To what extent is a sense of ‘there, but for the grace of God, go I’ a feature of these works?

PH: I do sway between both camps. I identify with the outsiders and the downtrodden. I even identify with the power of so-called toxic masculinity to some extent, but I fear it as well. I fear the mob, but there is something inside me which is excited by it. I think I would probably be more at home in the middle of a riot than trapped in a suburban dinner party if truth be told.

JE: ‘Aftermath’ at Tate Britain and ‘Magic Realism’ at Tate Modern have brought the work of artists that you admire, such as Otto Dix and Max Beckmann, back into public consciousness at a time when we face issues which could be seen to have parallels with the period of the Weimar Republic. Would you see the current renewal of interest in the work of such artists as reflecting in any way our current political challenges and to what extent might you see the style of Magic Realism or New Objectivity as being particularly relevant to our current political and social challenges?

PH: There is now a lot more interest in German art of the early 20th Century. It is powerful and warned against the coming wars and genocides. As with every period of decadence, there is the backlash of chaos and totalitarianism. We have been entering this phase for about twenty years now. I do not see us surviving the next major upheaval, which I see as apocalypse.

JE: Your work in more recent years, while continuing to explore conflict and the causes of conflict, has also had a redemptive element and impetus. The major works in this exhibition, however, seem somewhat despairing of humanity. Is that fair comment or am I overlooking the redemptive element in these works?

PH: I am not despairing of humanity. I want my paintings to reveal to the onlooker the folly of believing in some kind of scientific utopia that we are all heading towards. We embraced death in the past, but cannot do it now. We knew the darkness in our hearts in times past, and we feared judgement. We now think of our ancestors as being not as advanced as us, uncivilised and a bit thick.

JE: What impact would you say Asperger’s syndrome has had on your work and your ways of creating art?

PH: My Asperger mind can only survive intact by drawing and painting. I am an addictive, hedonistic person by nature. That is destructive to me, and it is bad for the people around me, so I force myself to work, and walk and pray. It’s been a long road with many wrong turnings, but I have never felt that it wasn’t worth it. I believe that I am walking towards something incredible!

JE: You’ve talked about creating and understanding art in terms of the Trinitarian concept of Idea (God the Father), Technique (God the Son) and Message (God the Holy Spirit). Does this concept derive from ‘The Mind of the Maker’ by Dorothy L. Sayers or do you have another source? What attracts you to this way of understanding art?

PH: Yes, I read ‘The Mind of the Maker’ many times. The whole Trinity idea has become the basis of my art and life, and it’s the only way I can understand what the function of an artist is, or indeed any profession.
Robert Heller ended his monograph on Howson’s work by quoting Milton: ‘long is the way / And hard, that out of hell leads up to light.’ He applied those lines to Howson’s personal journey but, in the light of Howson’s recent images and exhibitions, they should also be applied more generally to the struggles and changes with society in our time.