It wouldn’t be possible to take these pictures now – not least because the fabled Dean Street member’s Club (the Colony Room Club) is now someone’s living room and an alarming number of the people I photographed there are dead.

Fourteen of the series I shot at the Colony Room club between 1999-2001 are on show at the Photographer’s Gallery as part of their Shot In Soho show, curated by Karen McQuaid and Julian Rodriguez. Members clubs don’t take kindly to people marauding with a camera. I was fortunate that Colony Room proprietor Michael Wojas made an exception for me.

It was a small room and I used a big Nikon SLR with Speedlight flash. I like wide-angle lenses, so I didn’t skulk slyly in a corner. If I wanted a picture, I had to get up close to get it. That flashgun was pretty brutal even when you bounced it off the low ceiling – and disastrous when you forgot you had colour film loaded as it was painted the same bilious green as the rest of the Club and so made everyone look even iller than they would be in the morning.

Looking back it’s fairly miraculous that I didn’t get thumped. Brian Patten memorably described the Colony as ‘a small urinal full of fractious old geezers bitching about each other’. Still, an influx of younger members coaxed in by Michael had seen it loosen up and morph into the playground of the YBAs and musicians from Blur and Alabama 3. And the surprising tenderness in so many of the pictures belies the Club’s fearsome reputation.

It helped that I was using film and didn’t show prints to many people. But the biggest advantage was that I was a barmaid with a camera – so most people assumed the pictures would be crap and paid no attention to what I was up to.

I soon learnt who loved being in the frame and who didn’t. There’s a surprising amount of nudity considering that it was licensed premises and not a strip club. I think there are as many pictures of Damien Hirst naked as there are clothed.

The membership was genuinely mixed – you were as likely to rub shoulders with a plumber as to a pop star and all ages were represented. But even in such familiar surroundings it often took me a long time (and a few drinks) to pluck up the courage to start photographing – usually when I had missed the opportunity of some good pictures and just couldn’t stand missing any more. I worked quickly and haphazardly – especially when I was supposed to serving drinks or collecting glasses. This meant that I often had no idea who I was taking pictures of. I remember being very surprised when a picture of an equally surprised Joe Strummer turned up on a contact sheet. 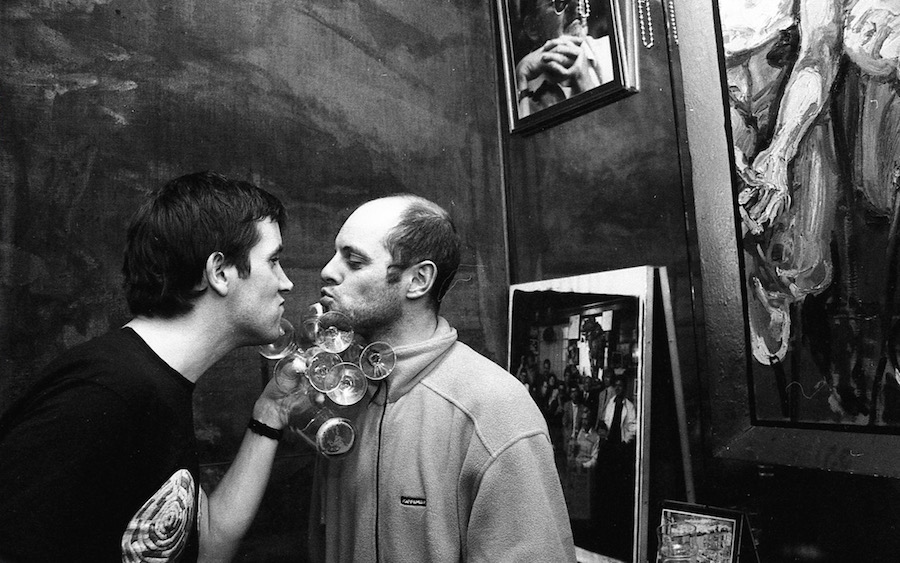 It wasn’t just Michael Wojas who supported me. The photographer Nic Tucker was incredibly generous – he gave me all the film, processed it and taught me to print on beautiful (and expensive) Kodak Extalure paper. I am very sad that Nic died recently, without getting to the gallery to see the show or seeing a copy of the excellent Shot In Soho catalogue published by Prestel. Helmut Newton’s agent Tiggy Maconochie was a club member and she was the first person to ever buy a print from me (above). Some praise from master black and white printer Steve Walsh also went a long way.

I knew I was photographing a scene that was well worth documenting and I was getting good pictures. I’d love to be able to say that it was part of a grand plan – but it wasn’t.

I got my job at the Colony Room Club courtesy of the vast bar tab that Michael Wojas had let me merrily run-up. One day he approached me with a grave expression on his face, waving a wodge of receipts all bearing my signature in lieu of payment.

He asked, sternly, what “we” were going to do about the horrendous outstanding sum (which was well above my monthly income). I flashed him what I hoped was a winning smile and suggested I come and work it off. To my surprise, he flashed a bigger smile back and that’s how I ended up behind the black Formica bar in Soho’s most notorious drinking den.

I was an unhappy journalist at the time. I was scraping a living on Londoner’s Diary, the Evening Standard’s (then) posh gossip column and being bullied by the public schoolboys in charge (who included Boris Johnson). I hated it so much at the Standard that I used to cry on the way to work. However, I relied on that job to pay the rent and I hoped desperately that they wouldn’t find out I was moonlighting on the Daily Star’s Rave desk.

I shouldn’t have fretted – none of the Londoner’s Diary gang ever soiled their hands picking up the Daily Star. In fact, it was Rave Desk editor Linda Duff at the Daily Star who sacked me as her boyfriend took all the pictures for her pages and any competition was unwelcome.

I got cancer and gave up journalism. I recovered from the cancer (and the journalism) and did what I had always wanted to do: I went to art college.

I took these pictures 20 years ago and I always knew they had currency even though I was ridiculed for taking them at the time. Pictures from this era made up my portfolio when I applied to do my fine art degree – I was very nearly rejected – but I believed they would have their day. I’m so thrilled that they are now hanging next to work by William Klein and Corinne Day at the Photographer’s Gallery.

One late afternoon during my tenure behind the bar, I was idly polishing glasses at the Club, sunlight weakly bleeding through the grimy windows. In sailed my editor from Londoner’s Diary, Sebastian Shakespeare. “So this is your REAL job Gebler Davies!” he smirked, triumphantly. I didn’t know it at the time, but he was right.