Overshadowed by iconic images from Picasso 1932 and Bacon/Freud two of the Tate’s current exhibitions feature powerfully expressive crucifixion images. In 1932, the ‘year of wonders’ explored by Tate Modern’s Picasso 1932: Love Fame Tragedy, Picasso created thirteen seminal ink drawings of the Crucifixion, while All Too Human: Bacon, Freud and a Century of Painting Life at Tate Britain showcases the fearful and terrible grandeur of the 1959 Crucifixion by F.N. Souza.

The crucifixion became, for Picasso, a way ‘to understand and express the raw agony and desperation of human emotion’

Timothy Hilton has argued, from the evidence of his drawings, that the theme of the crucifixion must have moved Picasso deeply from early youth to old age, ‘being both a violent, unspeakable crime and the traditional act of renewal of life’ (Picasso’s Picassos, 1981). The crucifixion drawings from 1932 need to be understood in this context, but also the wider context of the atheist artist whose project was, as Andrew Graham Dixon has argued, to re-enchant modern art with the power of the ancient superstitious images of Spain’s Catholic past. 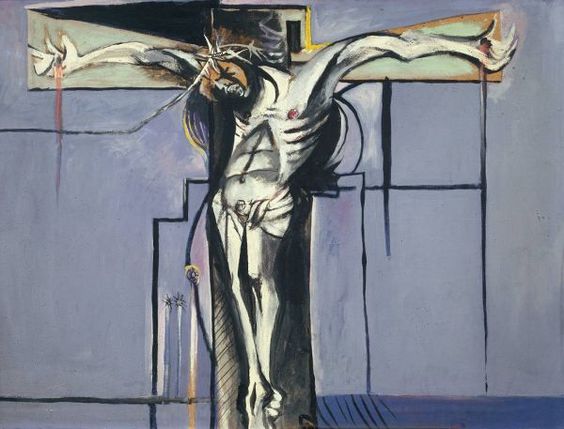 The extent to which his work employs spiritual themes and, often, traditional religious iconography, has been most fully explored in The Religious Art of Pablo Picasso (University of California press 2014), where Jane Daggett Dillenberger and John Handley address Picasso’s cryptic 1930 painting of the Crucifixion; the artist’s early life in the Catholic church; elements of transcendence in Guernica; Picasso’s later, fraught relationship with the church, which commissioned him in the 1950s to paint murals for the Temple of Peace chapel in France; and the centrality of religious themes and imagery in bullfighting, the subject of countless Picasso drawings and paintings.

Several critics have argued that the image of the crucifixion became, for Picasso, a way ‘to understand and express the raw agony and desperation of human emotion resulting from intense experiences with death’ , in particular, the suicide in 1901 of his friend Carlos Casagemas. In relation to the 1932 drawings, however, the inspiration seems to have been the great sixteenth-century Isenheim altarpiece of the Crucifixion by Mathias Grünewald.

In early September Picasso left for Zurich to visit what was his first major museum exhibition. On his return, he began work on this extraordinary series of crucifixion drawings. Despite suggestions that he had gone to see Grünewald’s altarpiece on his way back from Zurich, it is unlikely that he did so. Nevertheless, the Isenheim altarpiece was the immediate inspiration for his drawings, although he said that ‘as soon as I had begun to draw it, it became something else entirely.’

His basic move was to deconstruct Christ’s crucified body as a cubist arrangement of skeletal bones. On paper, as description, this sounds a bone-chilling approximation of the violence entailed by crucifixion, yet, in practice, has the colder abstract feel of exercises in formalism. Some of the drawings then move further in the direction of abstraction, while the most expressive utilise the fluid fluency of Picasso’s representational line drawing to evoke the human agony of the cross. 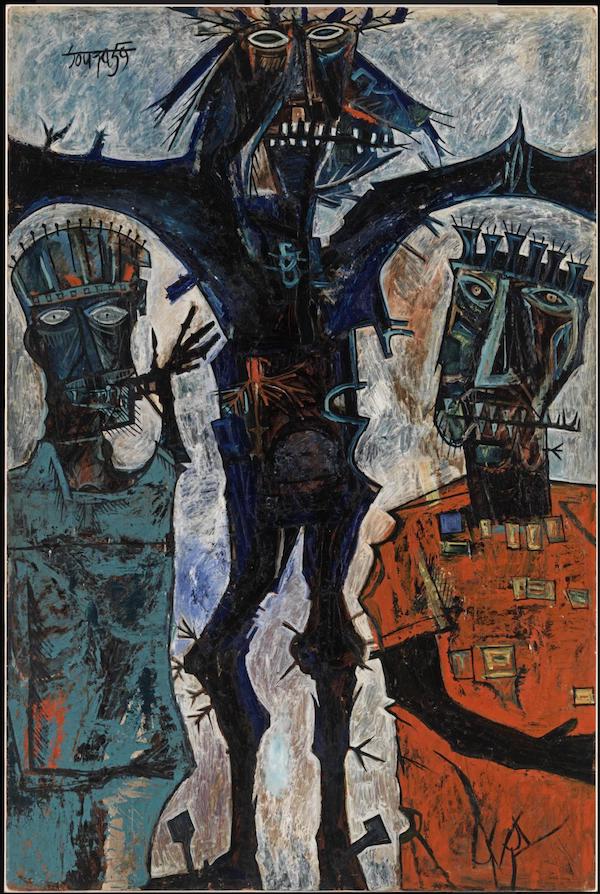 F.N. Souza was influenced by Picasso and Grünewald in his paintings of the crucifixion. The compositional device of the central Christ figure flanked by his mourning apostles and rendered with distinctive upturned hands dropped head and pronounced ribcage derives from Grünewald’s Altarpiece. This was a device that was to influence painters such Picasso, Francis Bacon and Graham Sutherland in the 20th century. Toby Traves also notes that comparisons can also be made to ‘Picasso’s work of the late 1930s and the 1940s, though the distorted faces in Crucifixion may equally be compared to those of Les Demoiselles d’Avignon.’ With his quick, fervent strokes of black as outline, Souza’s work also drew on the religious expressionism of Georges Rouault and Bernard Buffet. 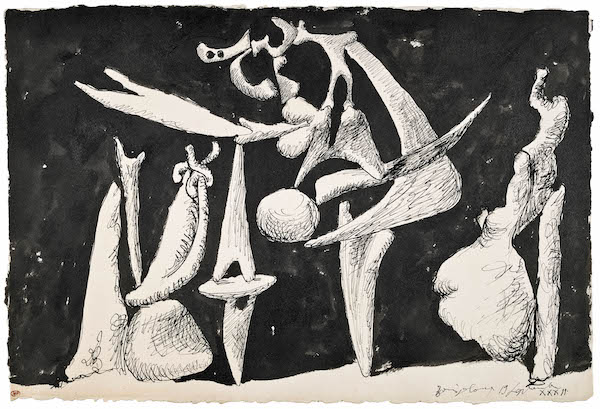 All Too Human provides an all too rare opportunity to appreciate the graphic power of Souza’s art where saints, businessmen and naked figures are some of his main characters, inhabiting a world shaped by loss and desire, as well as spirituality. A further opportunity to experience the force of Souza’s art and crucifixions will be provided by the display in St Paul’s Cathedral this summer of a 1962 Crucifixion, on loan from the Methodist Collection of Modern Art as part of the UK India Year of Culture.

St Paul’s Chancellor Canon Mark Oakley, who is responsible for the Cathedral’s Visual Arts Programme, says: ‘We are delighted that in this year when the UK and India are celebrating a major bilateral year of cultural exchange, St Paul’s has the privilege of exhibiting the raw energy of Francis Souza’s ‘The Crucifixion’ of 1962. Refuting what he called the ‘blond operatic Christs’ found in the churches of his childhood in Goa, Souza brings us back to the horror of Christ’s public execution and invites us to interrogate the pains and cost of love and how this love might, indeed, reflect the divine.’

Between the two World Wars and in the aftermath of World War II, Grünewald’s Isenheim Altarpiece with its brutally realistic depiction of the suffering endured by the crucified provided a frame and inspiration for artists such as Picasso, Rouault, Buffet, Bacon, Sutherland and Souza to protest the violence unleashed by human beings in that most bloody of centuries. The Tate’s current exhibitions provide an opportunity to explore some of less well-known and less frequently exhibited of these images, which ultimately stand as a warning against our human tendency to attack and destroy those we scapegoat.