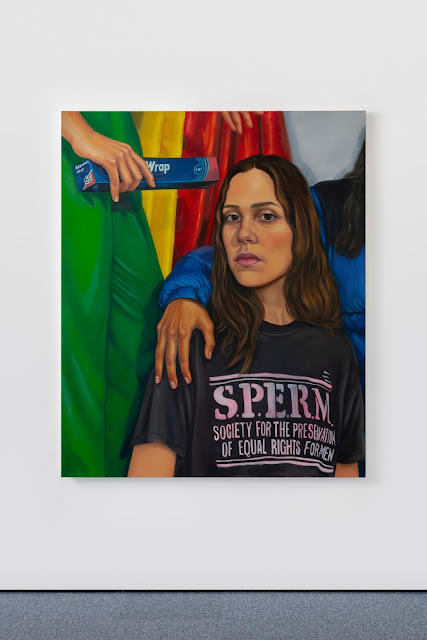 New York based Canadian Chloe Wise’s impressively scaled paintings anatomise the awkward gaps between the instinctual self and the performance required to fit in with group norms. Above is You definitely lied to the right person, 2019. The presentation at Almine Rech is effectively choreographed: the paintings are hung in a generic reception room with cheap carpet and paper towel dispensers, suggesting we might be assessed and ought to be cleaner. Downstairs similar characters appear in a wittily scripted film which takes you back to the paintings. 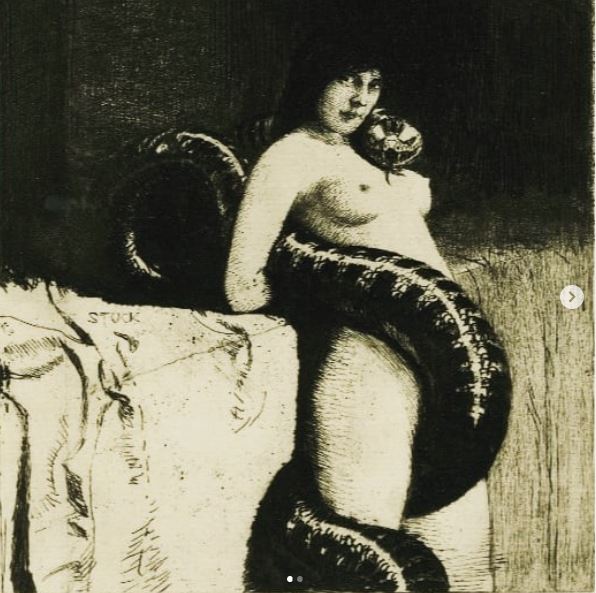 Various shows at the British Museum

It’s easy to see that Tate Modern (Bonnard + Tanning + West) has three interesting exhibitions May, but the British Museum can claim similarly. Franz Stuck’s ‘Die Sinnlichkeit (Sensuality)’ 1889-91 sees a snake entangled with Eve, part of a display of Symbolist prints, and one of the movement’s defining images of women as darkly enticing femme fatales. Add the surveys of Munch and Rembrandt and The World Exists To Be Put On A Postcard – artists’ postcards from 1960 to now and you have a feast quite apart from ‘the usual stuff’… 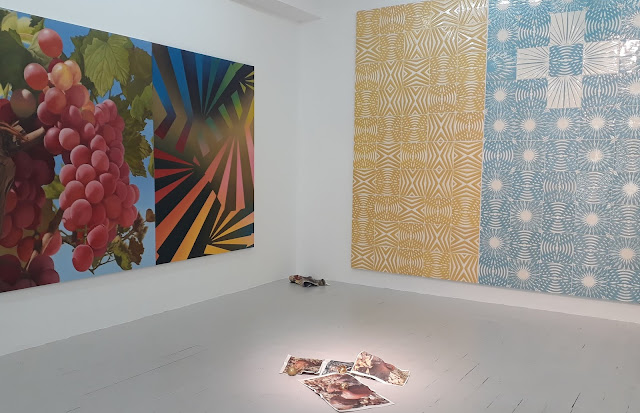 The Anglo-Cypriot’s multi-media practice, yo-yoing between the dirty and the transcendental, is well surveyed here through film, photography ceramic tiles and sculpture as well as paintings, which includes what might be called ‘op expanders’ paired with hallucinatory flowers and fruit. Hulusi has chopped up and coloured his formerly black and white ‘expanders’ to tweak the trippiness which contrasts – or maybe doesn’t – with the lush visual consumption of flora. 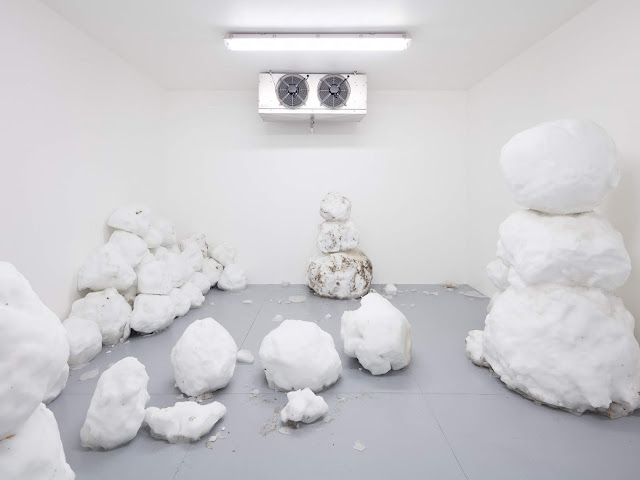 The titular date was when the artist filched snowmen and balls from children’s playgrounds in his native Lithuania. And here they are in London, kept at -3°C in a giant fridge you can walk into to ponder the question: if your country is chock full of Soviet legacies, what do you preserve? Unusual in that these are perfectly ordinary objects, and yet the show has a definite wow factor. Exhibitions May 2019 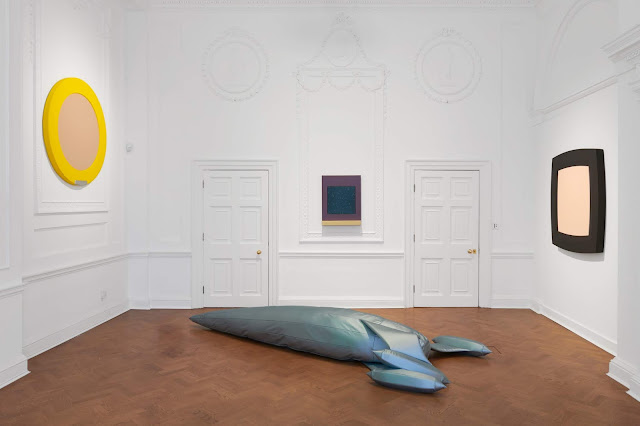 Sylvie Fleury used to say she was a painter, but only on her face. Now several of her acrylic on canvas on wood versions of make-up palettes are included in a neat survey. The glowering ‘Private shadow – Emerald Sun’, 2018, seen here (in Ben Westaboy’s photo) above a comically deflated phallic rocket, is particularly seductive as a minimalist abstraction through which we might travel – in the absence of branding – from fashion to art and wonder about the differences in objects of desire. And the larger show of Rockenschaub’s site-specific pop-minimalism is the perfect complement: a related language used to different ends.

Some of the Chicago Imagists are well known – Jim Nutt, Karl Wirsum, Christina Ramberg , Gladys Nilsson – but there are 14at Goldsmiths. Among the others employing the typical flattened forms, repeated patterns, disparate sources and a  humorous outlook which extended to them showing collectively as The Hairy Who is Roger Brown. Here is his ‘Misty Morning’ 1975, in which a lorry interrupts a rather original depiction of a rural idyll. 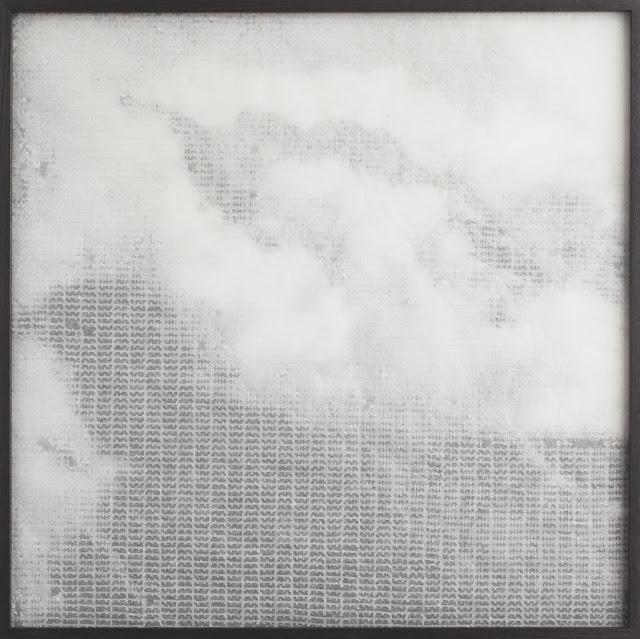 Caroline Jane Harris: A Three-Dimensional Sky at Kristin Hjellegjerde Gallery, Wandsworth to 11 May

Caroline Jane Harris’s solo show uses historic lantern slides and her own photos as sources, layering them with positive cut-outs and etchings of the consequent negative shapes of the images’ bitmaps to set up a dizzying interchange between analogue sources and digital representations. Additional elements of original image capture and apparent fragility are built into the cloudscape ‘A Three Dimensional Sky’, in which the print is veiled by the cut-out of a translucent tissue paper normally used to clean camera lenses… Exhibitions May 2019 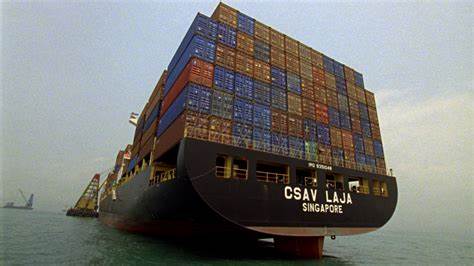 Allan Sekula: Photography, A Wonderfully Inadequate Medium at Marian Goodman Gallery to 18 May

If you’re in the mood for rewarding hard work, set aside an afternoon for a museum-standard survey of Allan Sekula’s career. There are 13 projects here, but the key, linked, ones are the photo and text based ‘Fish Story’ 1989-95 and the 3 hour film ‘The Lottery of the Sea’ (still above). They use the sea as a metaphor for the global reach of capitalism, and aim to effect a radical critique by foregrounding the typically hidden role of labour in trade. Sekula counters post-modernist accounts of the simulacral with the gritty material realities of exploitation, industrial decline, uncontrolled growth and pollution. Maritime industry is seen as a representative infrastructure of globalism. The Internet has subsequently increased the impression that the world operates through frictionless capitalism, increasing Sekula’s relevance. That said, another way of putting that is: hundreds of images of ships, ports and workers – not for everyone… Exhibitions May 2019

David Salle: Musicality and Humour at Skarstedt Gallery to 25 May

David Salle (say ‘Sally’) scores with a new set of 11 assured fusions of different worlds, with greyscale 50’s cartoons the dominant recurring element. He starts by deciding how to divide the canvas, then proceeds with little planning to populate ‘doing paintings’ in which the characters are typically busy. In ‘Latin Rythms’ 2018, it seems the artist is treading on his own work just as he decides it would be fun to have a Mexican ride his donkey across its disparate contents. Exhibitions May 2019 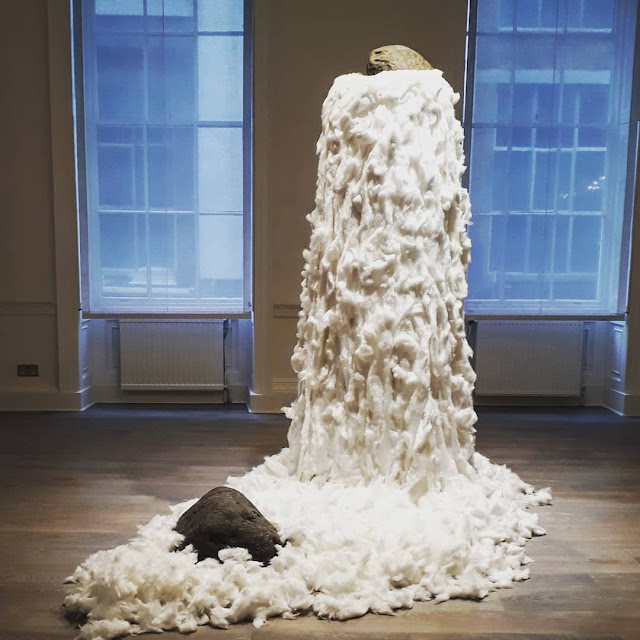 Tribute to Mona-Ha at Cardi Gallery to July 26

This encounter between cotton and stone is one of 18 installation-scaled works across four Mayfair floors which make up the most impressive Mono-ha (Japanese ‘School of Things’)show London has seen. It’s typical of Lee Ufan in showing the unaltered material properties of things, and resisting any hierarchy between them: Koji Enokura, Noriyuki Haraguchi, Susumu Koshimizu, Katsuhiko Narita, Nobuo Sekine, Kishio Suga, Jiro Takamatsu, Noboru Takayama and Katsuro Yoshida are also represented by work produced between 1968 and 1986.Exhibitions May 2019