The British Red Cross notes that there are an estimated 117,234 refugees living in the UK, which equates to 0.18 percent of the total population. In 2015 the UK received 38,878 asylum applications – less than Germany, Sweden and Hungary – of which just 45 per cent were asylum and allowed to stay. Many are refused because it is difficult to provide the evidence needed to meet the strict criteria of a refugee.[i]

As Richard Warren of the Kent Law Clinic notes, living as a migrant in the UK has been made even more difficult in recent years by-laws introduced by Theresa May during her time as Home Secretary. With the Immigration Act 2016, May built upon a process begun two years earlier to create “a really hostile environment” for those living in the UK without leave to remain.[ii]

In the light of this hostile environment, which has only been reinforced by Brexit, three exhibitions exploring the experiences of refugees are perhaps required viewing. The Lives of Others is two exhibitions of work by German refugee artists at Ben Uri Gallery and Museum from 29 March – 18 June 2017, while Chaim Stephenson: Between Myth and Reality at St Martin-in-the-Fields (to Wednesday 10 May) showcases work by an artist with a lifelong concern for people driven from their homes. 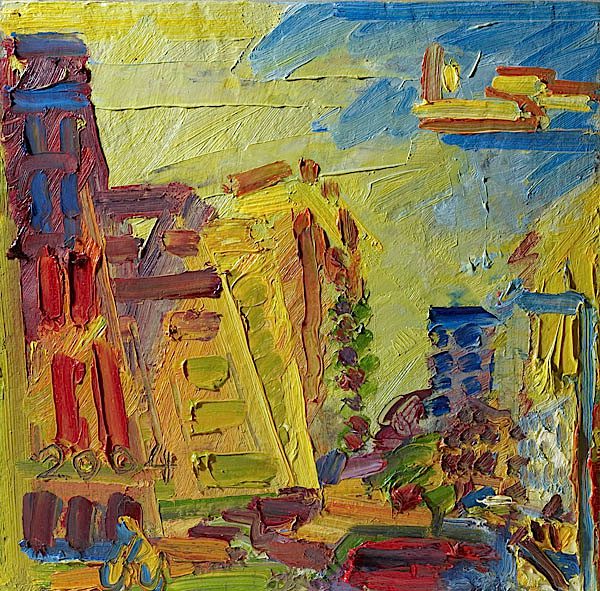 Refugees: German Contribution to 20th Century British Art explores the work of artists who, owing either to their Jewish ethnicity or political opposition to National Socialism, made ‘forced journeys’ to England in the years 1933–39. Following the election of Adolf Hitler to the Chancellorship of Germany in 1933 and the introduction of anti-Semitic legislation, a number of artists, including Hans Feibusch and Ludwig Meidner, were declared ‘degenerate’, and forbidden from practising. Some, including Frank Auerbach, Eva Frankfurther and Harry Weinberger came as children. Their experiences contrast with those of established artists, such as Martin Bloch, Grete Marks, Meidner and Erich Wolfsfeld, stripped of their livelihoods in Germany and attempting to re-establish their careers in a new host country, where the knowledge and appreciation of German art remained low. 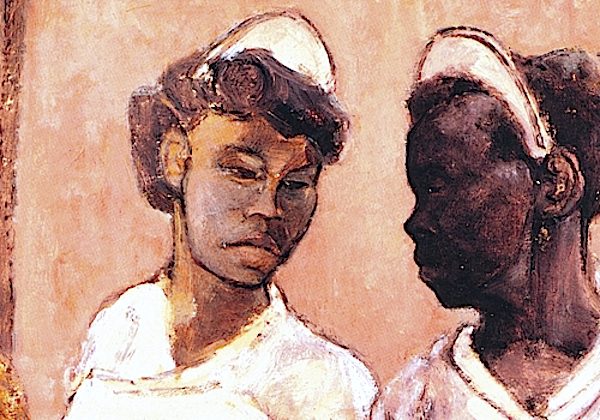 Selected Works by Eva Frankfurther (1930–1959) has work by the artist who was born into an assimilated Jewish family in Berlin but who escaped to London with her family in 1939 where she studied at St Martin’s School of Art. Her contemporaries included Auerbach, who recalled her work as ‘full of feeling for people’. She said, ‘West Indian, Irish, Cypriot and Pakistani immigrants, English whom the Welfare State had passed by, these were the people amongst whom I lived and made some of my best friends.’ 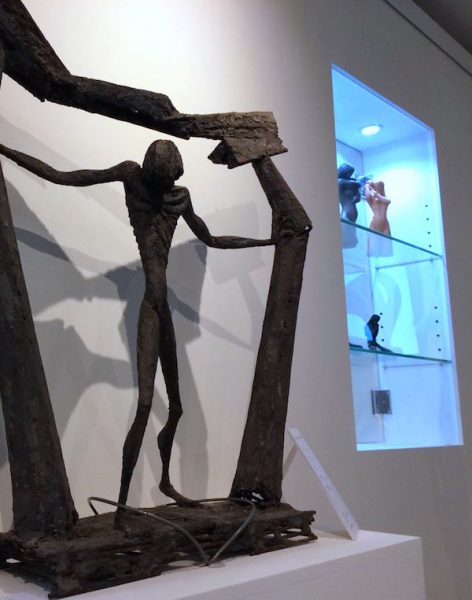 Chaim Stephenson: Between Myth and Reality includes a wide range of sculpture inspired by the stories in the Old Testament and also those that came out of the artist’s deep lifelong concern with the plight of refugees. The refugee statues are evocations of families fleeing famine, war or other disasters and speak of a universal and contemporary reality that not only mattered profoundly to the artist, who was born in Liverpool to Russian Jewish immigrant parents but also affects us all.

There is a fascinating story that remains to be fully told about the European artists who fled to Britain from Nazi or Soviet persecution and their reception in England. Douglas Hall is one to have told a part of this story in his book Art in Exile: Polish Painters in Post-War Britain. He sees the group of Polish artists about which he writes as having experienced a double exile, as they found that they did not “conform to the norms laid down … by the nexus of opinion-formers who control the means of promotion, reward and publicity in the art world,” yet also were cut-off from “a European culture more emotionally generous, more learned and more concerned with meaning than the one they found here.”

Despite this reality, émigré artists did build significant careers within Britain and interestingly many did so with the support of British churches.  Benedict Read in Adam Kossowski:Murals and Paintings, wrote that in Britain after the war the Church was ” a vital artistic culture,” as “the thirty years after 1945 witnessed for the Catholic Church in particular in this country an almost unprecedented campaign of church building and decoration, with the new cathedrals in Liverpool, Cardiff and Bristol just the tip of the proverbial iceberg.”  He reiterates this perception in his 1998 lecture to the Royal Society of British Sculptors noting that following the Second World War: ‘Churches were being repaired. New work was being installed in them. There was an expansion of church buildings with works of art in them.’ Church commissions gave émigré artists – such as the Hungarian Jew Ervin Bossanyi (stained glass), Feibusch (murals), the German Jew Ernst Blensdorf (sculpture), and the Pole Adam Kossowski (ceramics) – the opportunity to build new careers.

In writing about Feibusch, Jutta Vinzent has noted the extent to which this was “a period of intense artistic activity in Britain” which was “stimulated to an inestimable extent by émigré artists.” Read quotes Feibusch as saying: “You must realise, first of all, how very different the general atmosphere of those days was; that the relief from the dark cloud of war, the exuberance of freedom, the hope of great artistic possibilities, were still strong, and the experience of working together for a common goal had not yet faded away.” Feibusch was befriended by George Bell, Bishop of Chichester, whose influence caused him to receive the first of his church commissions for murals on religious themes. From this beginning, he went on to work in thirty Anglican churches.

An interesting consequence of this situation is that Jewish artists in the modern era created a startling number of works for churches. Behold the Man: Jesus in Israeli Art at the Israel Museum in Jerusalem is currently exploring this phenomenon: ‘From the 19th century until today, Jewish and Israeli artists have engaged with the figure of Jesus, addressing complex questions of collective and individual identity. European artists reclaimed Jesus as a Jew and portrayed him as a symbol of Jewish suffering, and Zionist artists used the resurrection as a metaphor for the rebirth of the Jewish homeland; some Israeli artists related to Jesus as a social rebel or misunderstood prophet, while others identified with his personal torment or his sacrifice for the sake of humanity, which they connected to more recent victims of intolerance and warfare.’
Georg Mayer-Marton was a Hungarian Jew who, following his appointment at Liverpool College of Art in 1952, received commissions from the Roman Catholic Church to carry out mosaic works at a number of churches in the area, as well as a commission for a font at the Anglican Church of St Michael and All Angels in Tettenhall, West Midlands. One of his finest works, the Pentecost Mosaic, was saved from destruction in 1989 when it was transferred from the Church of the Holy Ghost in Ford, Liverpool (then facing demolition) to Liverpool Metropolitan Cathedral. Now another of Mayer-Marton’s mosaics is under threat. The crucifixion mosaic at the Church of the Holy Rosary Oldham is eight metres high and is made of natural stone and glass tesserae, ‘giving it a striking sheen, typical of Byzantine work.’ Mayer-Marton’s great-nephew, Nick Braithwaite, who is campaigning to save the Oldham mosaic, notes the poignancy of this Jewish artist creating a crucifixion: ‘My great-uncle, who was of Hungarian-Jewish descent, worked on this mosaic just 10 years after the war and losing his parents and brother in the Holocaust. It must have been very poignant for him to work on an image of the suffering Jesus.'[iii]

Exile and rejection are themes with deep biblical roots and as significant numbers of Polish artists, in reaction and response, have been influenced by Roman Catholicism, it comes as no surprise to find such themes among their work.  Marian Bohusz-Szyszko and other exiled Polish artists (such as Stanislaw Frenkiel, Kossowski, Henryk Gotlib, Marek Zulawski and Alexander Zyw) were part of a consistent but under-recognised strand of artists utilising sacred themes. Bohusz-Szyszko became artist-in-residence at St Christopher’s Hospice in Sydenham, where a large collection of his work can still be found, Bohusz-Szyszko’s work was also purchased by John V. Taylor, Bishop of Winchester, who came to view Bohusz as a mystic artist.

Writing in The Guardian in 2015 about Angela Merkel’s humane stance on immigration, Will Hutton stated: ‘Migration is what we have done since the earliest of times, triggering growth and enlarging our circles of possibility. Whether we’re discussing the Roman or British empires, 15th-century Venice or 20th-century New York or London today, great civilisations and dynamic cities have been defined by being open to immigrants and refugees.
They are, as migration specialist Ian Goldin characterises them, “exceptional people”.[iv] Over centuries, as he painstakingly details, it has been immigrants and refugees who have been part of the alchemy of any country’s success: they are driven, hungry and talented and add to the pool of entrepreneurs, innovators and risk-takers. The hundreds of thousands today who have trekked across continents and dangerous seas are by any standards unusually driven. They are also, as Angela Merkel says, fellow human beings. To receive them well is not only in our interests, it is fundamental to an idea of what it means to be human.’[v] These exhibitions and the history of émigré artists in the twentieth century reiterate and demonstrate the continuing relevance and significance of that message.