One of the more interesting art history books published in 2016 was Modern Art and the Life of a Culture: The Religious Impulses of Modernism by American academics Jonathan A. Anderson and William A. Dyrness. This book is of particular interest because it explores the religious (particularly Christian) influences and impulses running through modern art. The authors note that doing may seem an act of folly or hubris as the ‘dominant narratives of modern art portray it as achieving a progressive independence from religious influence, even as it usurped roles once confined to traditional religion.’ Their book is, therefore, a revisionist art history, albeit partial, which traces some ‘long and significant threads of religious and theological thinking that run through the past two centuries of Western art – threads that have been neglected or quietly taken for granted.’ They ask: ‘Can the work of Picasso, for example, be thoroughly understood apart from his own Catholic childhood? What about the Catholicism of Paul Cézanne or of Andy Warhol? The importance of Russian Orthodoxy to Vasily Kandinsky or Natalia Goncharova? Or the influence of Protestantism on Vincent van Gogh, Piet Mondrian or Robert Rauschenberg?’

Given the current Rauschenberg retrospective at Tate Modern, it is perhaps instructive to explore what Anderson and Dyrness wish to highlight through the argument they make in this book, by noting in more detail the part they suggest religion played in the work of Rauschenberg.

Rauschenberg’s family attended Sixth Street Church of Christ, a Pentecostal congregation in Port Arthur, Texas. The young Rauschenberg attended ‘church and Sunday school every week and went to Bible study classes during summer breaks.’ By thirteen he had determined to become a pastor himself. Later, in his mid-twenties, he gave up churchgoing altogether, acknowledging this as a major change in his life. However, as Elizabeth Richards has noted his art continued to incorporate ‘aspects of ritual and ceremony that recall his religious upbringing.’[I]

This was apparent in his first solo exhibition at the Betty Parsons Gallery in New York City (1951), where the titles of many of the works ‘incorporated weighty poetic or religious references, including Eden (c. 1950), Trinity (c. 1949-1950), and Crucifixion and Reflection (1950).’ Mother of God is one of only a few works from this exhibition to survive. ‘Its religious undertones are amplified by a collaged advertisement for the Catholic Review, found in the lower right corner, which reads “An invaluable spiritual road map…”’[II]The white circle, central to Mother of God, ‘seen through the lens of Christianity, may be read as a sign 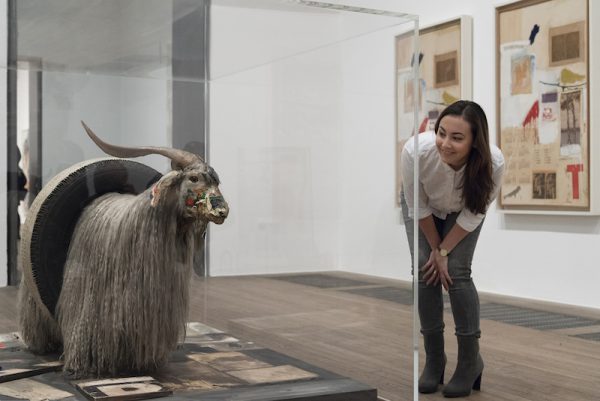 of eternity or motherhood.’ Anderson and Dyrness suggest Rauschenberg expanded this white circle to create the White Paintings, of which there were seven (“seven was infinity”[III]), ‘at the height of what Rauschenberg later called a “short-lived religious period.”[IV] He described the paintings to Parsons as “large white (1 white as 1 GOD) canvases organised and selected with the experience of time and presented with the innocence of a virgin.” Anderson and Dyrness view these works in terms of a ‘holy silence’ and ‘an apophatic speechlessness’ ‘gesturing towards the unrepresentable fullness of God.’

Additionally, as with his friend John Cage’s 4’33”, this holy silence is intended to elicit ‘a finer “listening” to what is present and provoke heightened sensitivities to the sheer miraculous hereness of everything.’ What we experience, they write, ‘is not (only) the stillness of God but the astonishing presence of the world God gives.’

Rauschenberg’s Combines ‘included religious structures’ and ‘the transition from the white paintings to the Combines involved (unavoidably) theological questions and difficulties.’ Prayer cards, tracts, church donation envelopes, a monk in prayer, and a ‘reproduction of the resurrected Christ addressing Mary Magdalene’ all appear in various Combines. Untitled black painting with a funnel (c. 1951) ‘is presented as a kind of figure’ where ‘a prayer card just to the right of the center of the painting … displays a reproduction of Carl Bloch’s Doubting Thomas (1881).’ ‘Flurries of red, yellow, green and white paint have been slashed across the surface immediately below this image’ which, within the figure represented by the painting, corresponds ‘to the position of the wound in Christ’s side, as depicted in the prayer card.’

Anderson and Dyrness note that, as a result, Rauschenberg may be ‘allegorizing the surface of the painting with the resurrected body of Christ,’ which then places ‘himself (and the viewer) in the position of the incredulous Thomas.’

Incredulity might be the response of some art critics to this referencing of religion in Rauschenberg’s work, but that may just as well reflect a loss of religious literacy through secularism, leaving many unable to interpret the religious references which abound in Rauschenberg’s work.  A similar exploration of religious references can be undertaken in relation to Monogram, the most well-known of the Combines, as has been demonstrated by Kenneth Bendiner.  Bendiner also notes that ‘Christian themes conceivably underlie many of [Rauschenberg’s] works,’ citing Odalisk (1955-58), Summer Storm (1959) and Dam (1959) as other examples.

Rauschenberg famously gave up his dream of becoming a minister because of his love for dancing, which his then minister told him was a sin. The retelling of that story from his childhood is, in some cases, the sole reference made by critics to religion in Rauschenberg’s work. Anderson and Dyrness help us see that, as Elizabeth Richards has stated, ‘rejection of organized religion did not dictate a rejection of spirituality and, in fact, his art often incorporated aspects of ritual and ceremony that recall his religious upbringing.’ Anderson and Dyrness do not explore the range of religious reference found in Rauschenberg’s work, and that of modern art more generally, in order to argue that this somehow makes this work ‘Christian art,’ rather they simply make the case that we cannot fully understand Rauschenberg’s work, as with so much great art, until we genuinely account for and interpret the religious references found so fully within it.

[I] “Rauschenberg’s Religion: Autobiography and Spiritual Reference in Rauschenberg’s Use of Textiles,” Southeastern College Art Conference Review 16, no. 1 (2011 [II] https://www.sfmoma.org/artwork/98.299.