He presented many artists long before they were famous including: Marina Abramović in 1973 when she was 26 and Joseph Beuys in 1970

Demarco has attended every Edinburgh Festival. Aged 17 when it started, “It was my university”, he says. Demarco’s belief in internationalism is central to his belief, and his ethos has remained faithful to the founding principle of the Edinburgh Festival, which is to heal the wounds of war through the arts. 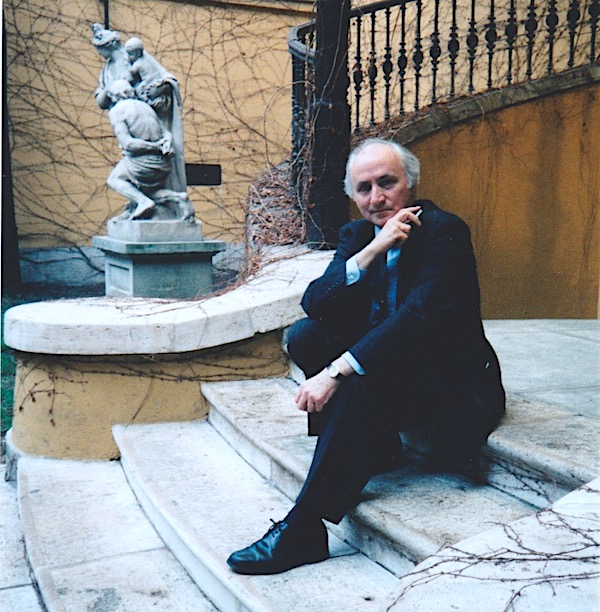 But Edinburgh could never contain this dynamic figure, and Italy, France & especially Eastern Europe became his artistic playground. He presented many artists long before they were famous: Paul Neagu in the 1960s, Marina Abramović in 1973 when she was 26, Joseph Beuys in 1970 & Tadeusz Kantor. Demarco showed Yugoslav art in the U.K. in 1970, a first of many many firsts.

I first met Demarco 40 years ago. My written archive – reviews, features, columns, includes over 400 references to him while my Clare Henry Photography Archive contains over 400 pix. My first Demarco trip was in 1982//3 to see Count Panza’s famous minimalist collection in Varese, Italy (it later went to the Guggenheim) followed by a visit to Baron von Thyssen’s museum on Lake Lugano. That was followed by memorable trips to Yugoslavia ending in Mostar and Sarajevo; later Hungary & Romania ending in Budapest. Demarco’s headlong international journeys (his most famous perhaps when he sailed from Scotland to Sicily with a boatful of artists) are easy to scorn until one sees them in action. Demarco’s foreign exhibitions always entail works made on the spot, not imported. Saves money!

Funding is a permanent problem; his big ideas carried out on tiny budgets resulting in inevitable debts. The best description came from an exasperated arts council guy. “Demarco’s books are not so much cooked as browned under a slow grill.” But in 1980 his grant was cut ever since fund-raising has been a priority. Even as I write my email pings, there it is again – a Demarco appeal! Not for his gallery nowadays but for his significant and internationally important archive.

For 30 years he has sought a home for his millions of photos, catalogues, papers, books, films and records. His programs of more than 1,000 art exhibitions and several thousand performing arts productions with artists from over 60 countries has created a mass of material. What to do with it? Currently, the Scottish National Gallery & Edinburgh’s Summerhall are involved, but a flood at the latter caused problems.

Demarco’s story began at Edinburgh College of Art, 1949-53. He married Anne, also an art student, in 1956, and after two years National Service went on to be a school teacher. He soon realised he wanted to teach a wider public. In 1963 with others he set up the Traverse Theatre & Gallery – the first of many gallery spaces. He opened his own in Melville Street in 1966. A year later he quit teaching and took on the job of director of contemporary art for the Edinburgh Festival

Over the last 54 years, he’s had a series of art galleries at various Edinburgh locations. “I realised I wanted an Edinburgh where the spirit of the Festival was there all the time. I wanted that internationalism. I didn’t want a locked-down, inward-looking Edinburgh 11 months of the year.

His passion for art, for people, remains as fierce as ever. He’s been to the Venice Biennale every time since 1968. Last year this great survivor was still organising a major exhibition and symposium there. In 1968 he also began his regular visits to Eastern Europe, initially Poland, Romania and Yugoslavia, later Hungary, Czechoslovakia and the Baltic States. He is a hero in Romania.

His awards and honours are legion – starting with Poland’s Gold Medal, 1976 via Italy’s Cavaliere 1986, Witkacy Prize 1992. In 2012 he received gold medals from Germany, Romania & Poland. He has honorary doctorates from universities in Europe and North America. For seven years he was Professor of European Culture at Kingston University. Demarco’s handprints in gold are immortalised in the City Chambers quadrangle. He got the European Citizen’s Medal in 2013, the only U.K. person ever to do so. A true European, Brexit has reduced him to tears.

Today Dundee University plays a big role, helping the Demarco Archive in many ways. In 1988 I wrote a piece about this “saint or sinner who continues to fit a 48-hour day into 24, a self-appointed ambassador for art and culture worldwide.” Nothing has changed, except perhaps his birthday party. Previous ones have been celebrated in fine style. This year, of course, things will be quieter. Yet if I guess correctly he will be deluged and enveloped with bags of unique internet cards in the form of original works of art. Here’s mine. – CLARE HENRY