The entertaining and thought-provoking solo exhibition, ‘Soft Girls’, by Rosie Gibbens, is at the Zabludowicz Collection, London, until 15 August. Gibbens has cobbled together a dozen moveable semi-humanoid sculptures out of domestic appliances, exercise equipment, sex toys, fabric and stuffing. She activates them in an accompanying video and live performance to generate raise questions about power and agency.

I first saw you three years ago, in a film that Art Monthly described as making ‘a convincingly earnest comic turn out of performing sex acts on an office chair’. How do you see that now?

I made ‘Professional Body’ for my degree show in 2018. My manipulation of an office chair developed out of mucking around while sitting on one: something clicked and I imagined this bored office worker in a very corporate space trying to entertain herself. The dynamic is unclear – perhaps the chair (or whoever it stands in for) has power over her, or perhaps she is in control of the situation. I remember some teenagers watching: they didn’t realise they were sitting on the same chair until I told them – they thought that was gross and got off fast!

The installation at the Zabludowicz Collection has some of the same spirit but is more like a gym. Do you go to the gym?

No, performance is my workout! Though it may not be very effective, as I like incorporating objects which probably don’t work. For example, I’m pretty sure the ‘vibrating plate exerciser’ doesn’t really make you lose weight – but it was good for a game at Christmas when you had to sit on it and make a life drawing while vibrating. And there’s a penis pump which I’m not sure works at all – I tested it with my finger – I doubt it would make anything bigger! I’m interested in niche products that are advertised as ways to streamline and improve our lives but actually make things more confusing and frustrating!

Are they sculptures or props?

I don’t worry about that or about whether the performance documentation is an artwork, which people often ask. You can get tangled up in definitions, but at the end of the day, it’s all part of the same project. I do want the props to stand up materially and formally, though, to work in their own right when I’m not there.

I notice you always perform in the same high heels?

Yes, they’ve become part of my character of myself. They change how I move and my posture and can reference different realms to me – they have a slight fetish aspect but also wouldn’t be out of place in a wedding or boardroom. That fits with how my materials are a mix of medical and sex shop supplies and things you’d have at home. I like to cross over these different worlds – gym/office/hospital/porno / domestic – so it’s not clear what type of space you’re in.

Tell me about the printed fabric ‘Tongue’, which can be pulled out some 13 feet.

That comes from Looney Tunes: when a character sees something they like – often a cartoon woman – their eyes bounce out of their head and their tongue unrolls. So my tongue is responding to the other sculptures and performances in the same way. You pull on a butt plug to pop out the eyes – I saw some children who thought it was hilarious until their parents stepped in on seeing what it was! 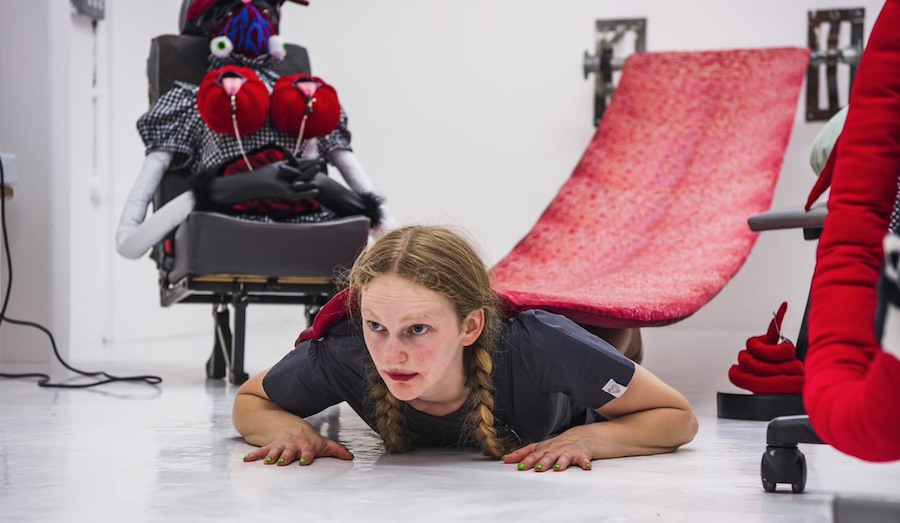 There’s a film of you using your inventions. Can the audience join in?

I’d encourage it in principle, but I’m not sure how long the sculptures would last, so only some can be played within this show. I’d like to build more robust sculptures in the future designed for other people to activate. There’s a real joy in being able to try them out, and that would change the dynamic.

What were you thinking about when you made the work?

I was mixing together different references to how female bodies are consumed and trying to give new life to stereotypical images by looking at them through my own lens. I was particularly interested in the Anatomical Venus models of eighteenth-century Italy, languid women with detailed reproductions of their innards exploding out of them for the purpose of medical training. I love their mix of glamour and the grotesque. I combined these with references to horror movie characters, sex dolls and nudes from art history. Hopefully, my sculptures and performance give different perspectives on and agency to these.

How do you use these figures?

Though my work has humorous elements, I think it marries dark and light. I was imagining the Venuses coming to life through the horror genre to seek revenge for the way they were originally portrayed in passive, sometimes violated positions. I give them a new cartoonised way of living. I think of them as having their own personalities and as versions of me. And there’s the ‘Soft Girl’ internet aesthetic, a hyper-feminised cute look taken so far that it appears ironic. These girls are playing with their identity around that stereotype and being irreverent towards it. That’s my approach, too.

‘Soft Girls’, by Rosie Gibbens, is at the Zabludowicz Collection, London, until 15 August.