“We need her work now more than ever,” Lisa Philips, the New Museum director stated, she continued, “We hope jaws will drop with this exhibition.’ Jaws may not be dropping, but New York critics are united in their praise of Lucas, with Jerry Saltz anointing her “one of the top four or five sculptors today.” There is no doubt curators Massimiliano Gioni, and Margot Norton, her London gallerists Sadie Coles and New York’s Gladstone Gallery are ecstatic with this perfectly timed show.

Sarah Lucas has colonised the New Museum with over one hundred and fifty works of sculpture, photographs, video, and installations

In her first and largest retrospective in America, Sarah Lucas has colonised the New Museum with over one hundred and fifty works of sculpture, photographs, video, and installations. The ever transgressive Lucas was first introduced to New York audiences with her inclusion of the seminal YBA “Sensation” show at the Brooklyn Museum in 1999. The title piece of her New Museum show “Au Naturel” was first exhibited in Brooklyn. An old stained mattress, propped against the wall is embellished with male and female sexual organs, represented by melon breasts and a phallus composed of oranges and cucumber, along with a rusted bucket. Also included in this retrospective is her photocopy on paper 1990 series, with bare-breasted and big-haired page 3 girls and misogynistic tabloid headlines. “Sensation” with its explicitly sexual images, including Chris Ofili’s “Holy Virgin Mary” with elephant dung embellishments, resulted in NYC Mayor Giuliani (and now lawyer and apologist for President Trump) to unsuccessfully attempt shutting down the Brooklyn Museum. 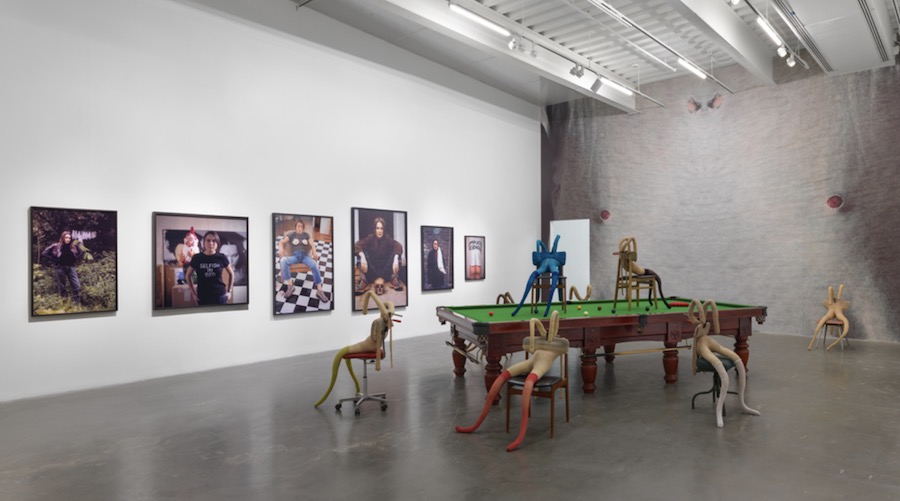 Lucas has long explored gender with a wit that makes her impassioned work both accessible and provocative. Her iconic self-portraits include wallpaper sized images or photos of the tomboyish artist smoking cigarettes or lounging about with fried eggs for breasts. Early self-portraits from 1993 capture the sunglassed Sarah in photocopies, framed in brown paper. From Surrealistic humour to her use of the humble materials of Italian Arte Povera, Lucas draws on art history to create her own distinctive creative vocabulary. Known for her unabashed depiction of penises, Lucas uses wire, concrete, paper mache, matches, beer cans, and plaster to portray erections. 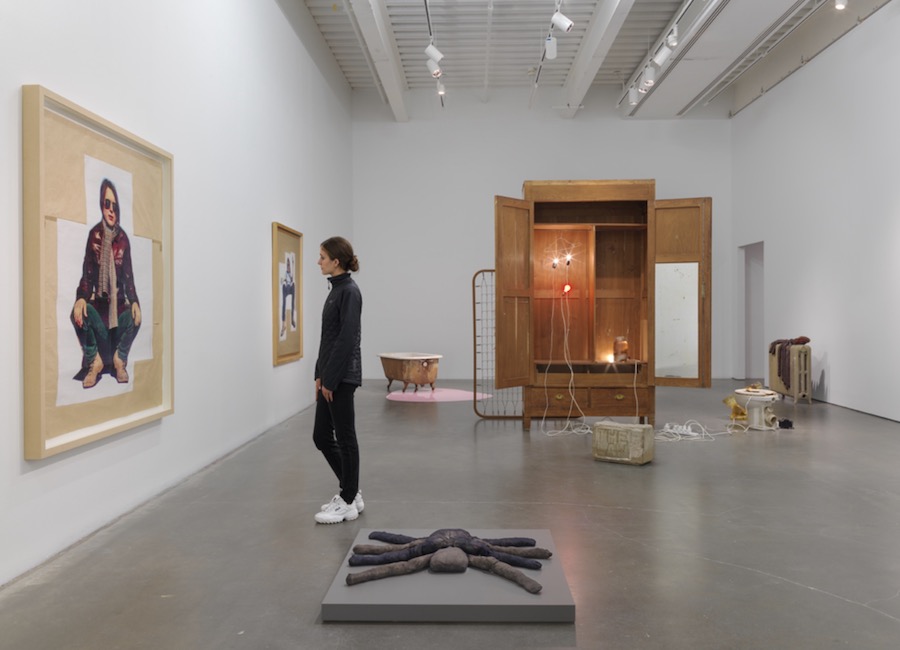 “Bunny’s” headless torsos, created in the last millennium, look as weirdly erotic and provocative as when first shown in London. Lounging on chairs, impossibly long splayed legs rebelliously slouch. Lucas is the punk daughter of Louise Bourgeois, the sardonic artistic descendent of Meret Oppenheim and Eva Hesse. The biomorphic NUDS sculptures, a more recent series, are composed of tights, fluff and wire, the tactile material like stretched skin, sensually coiled and juxtaposed on rough brick pedestals.
Whether protruding from unlikely orifices as in the plaster torso bottoms that are propped on furniture, or curled over a toilet, or made into a commode itself, cigarettes are obviously part of Lucas’ s work. My own favourite is “Cock” (2005) a proud barnyard rooster feathered with unsmoked cigarettes.

ON the top floor, Lucas pairs a wallpaper sized self-portrait, adjoining a fibreglass and cigarette crucifixion, “Christ, You Know It Ain’t Easy” (2003). Also, just to add to the ambience, cast concrete cocks are resting on crushed and bisected parts of a car. (“This Jaguar’s Going to Heaven”) Lucas’s by now familiar image, splayed, jeaned legs and her unwavering, unadorned gaze overpower the Christ composed of cigarettes. 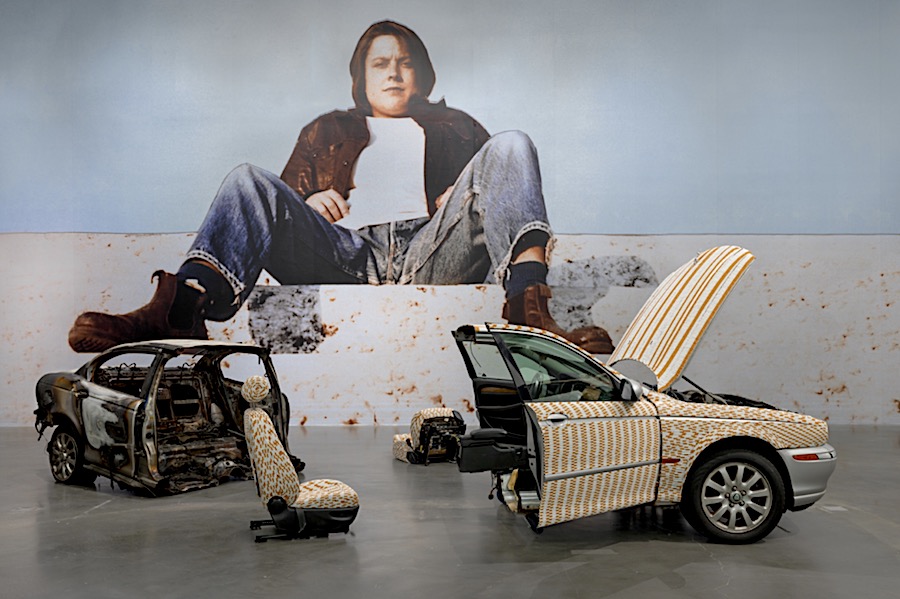 The initial piece that viewers encounter in the New Museum lobby is the insouciant “Vox Pop Doris” (2018) created especially for this show. The enormous concrete boots resemble those worn by hookers, drag queens and those who appreciate transgressive fashion. Thus, Sarah Lucas invites us all to join her for a walk on the wild side.