Thirty years ago next week, in 1990, Scotland made history at the 44th Venice Biennale. It was the first and only time in its 125-year history that Scotland was part of the official Venice Biennale, and as a country in its own right. Scotland was also given centre stage in the Esedra, the Biennale’s prime site at the heart of the Giardini in front of the Italian and American pavilions. The Biennale director himself wrote that he “considered this exhibition one among the most important events of the 44th International.”

It was a wildly ambitious, unprecedented, pioneering undertaking. Scotland rose to the challenge

A remarkable, memorable presentation from three key Scottish sculptors, David Mach, Arthur Watson, Kate Whiteford, filled the huge central space with splendid and monumental site-specific works. It was a triumph that made headline news and sent TV and front-page pictures round the world. 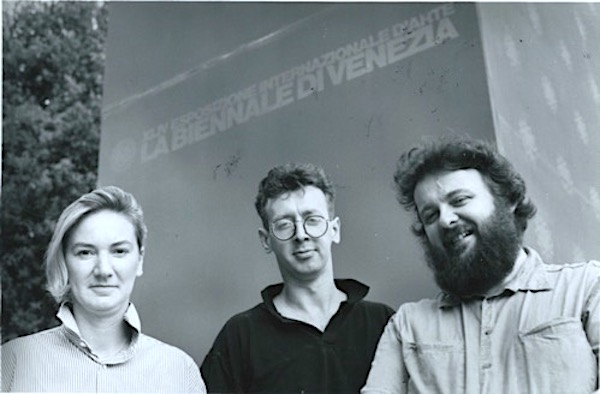 The initial idea, to celebrate Glasgow’s position as the 1990 European City of Culture, came from the irrepressible Richard Demarco but was carried out by the Scottish Sculpture Trust, (SST) on a tiny budget of £46,000, in the face of active opposition from the Scottish Arts Council and no local support.

Despite its success, Scotland did not try to build on this landmark event till 2003, when it was too late to seek space in the overcrowded official Giardini. Even with Independence, Scotland still has no permanent home. Scottish presentations take place, with current funding around £350,000, in various spaces scattered around the city. Yet in 1990 Scotland joined 39 other nations in the Biennale gardens, recognising that Scotland has a distinct cultural identity within Britain.

Barbara Grigor headed the SST. I was the curator, and together with Angela Wrapson and Lynne Sanderson who managed much tortuous technical administration, we managed this unique occasion on a very tight schedule: site visit Dec 8th 1989, artists proposals Jan 10th 1990, my catalogue essay for official Biennale catalogue Feb 20th, press opening May 23rd. Support from the Henry Moore Foundation and British Council made it possible.

Looking back now, I am amazed and proud of our success. Even the logistics were immense: laser-cut steel from Aberdeen; photo laminate from Glasgow; concrete from London, all trucked to Venice to be erected on site. No cell phones, no internet, no email. No money. Just a fax and postage stamps. 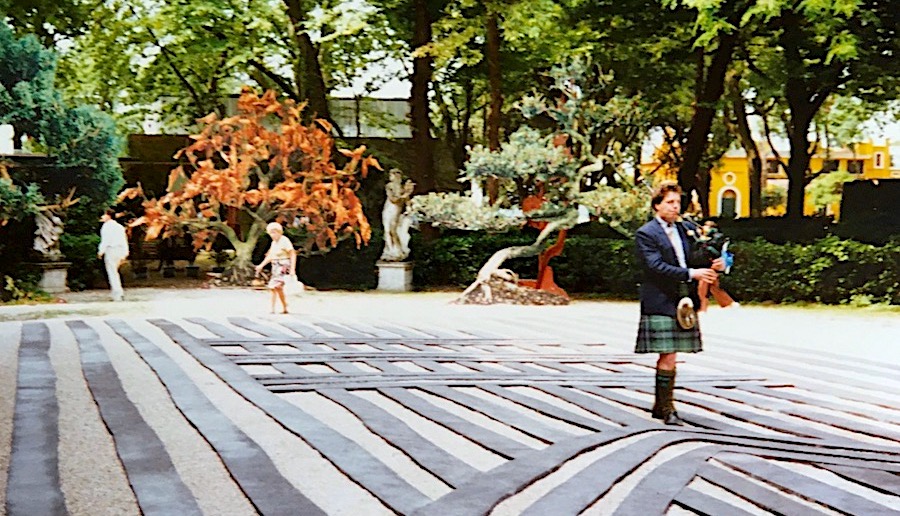 Happily, the triumvirate, (all in their early thirties) were experienced in working on large-scale international projects and took the brave, risky step of using materials new to them. Thirty years ago, large scale site-specific works were less common than today. The SST was key to promoting the idea in Scotland.

The Esedra had a distinct architectural quality which Kate Whiteford’s ‘Sitelines’, exploited to superb effect with her spectacular, massive 20×10 metre concrete and gravel land drawing, which carpeted the whole space. It was the star of the show. Referencing ancient Scottish rock carvings along with inspiration from St Marks tessellated marble floor, her work has long featured potent age-old archetypal signs: chevrons, bars, arcs, stripes: linear rhythms or mark-making of the strongest kind. Here she played on positive-negative, dark-light, embossed and engraved lines. “Keeping the lines fluid like a drawing – not easy in concrete!” she remembers. 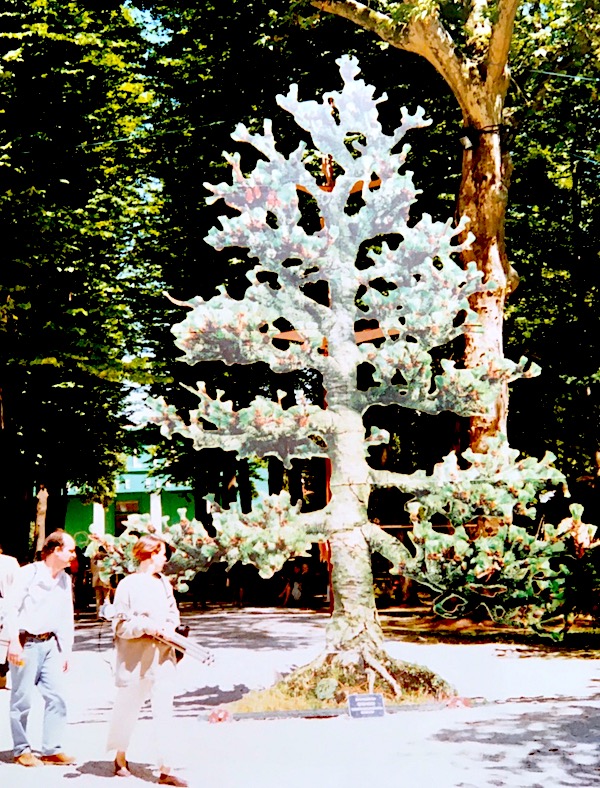 The result was a lyrical, beautiful, minimal linear creation, literally a ground plan for the Scottish exhibition.
David Mach was already well known for his colossal, provocative public installations built with thousands of car tyres, tons of magazines, armies of teddy bears. He took the trees surrounding the Esedra as his image, but in typical subversive fashion turned the notion on its head by opting for giant steel photo-laminated bonsais, liking both the contradiction in terms and the ironic multi-cultural implications of a Scot at the Biennale di Venezia, presenting something archetypically Japanese. Mach likes to, “Jarr the public into awareness, Don’t just stand there. Throw a rock.”

Today he says, “The bonsais were about not choosing something to do with Scotland, just from a belligerent standpoint!, And Venice forced me to consider making work that could exist out of doors, that would involve materials new to me and have ‘lasting’ properties.” 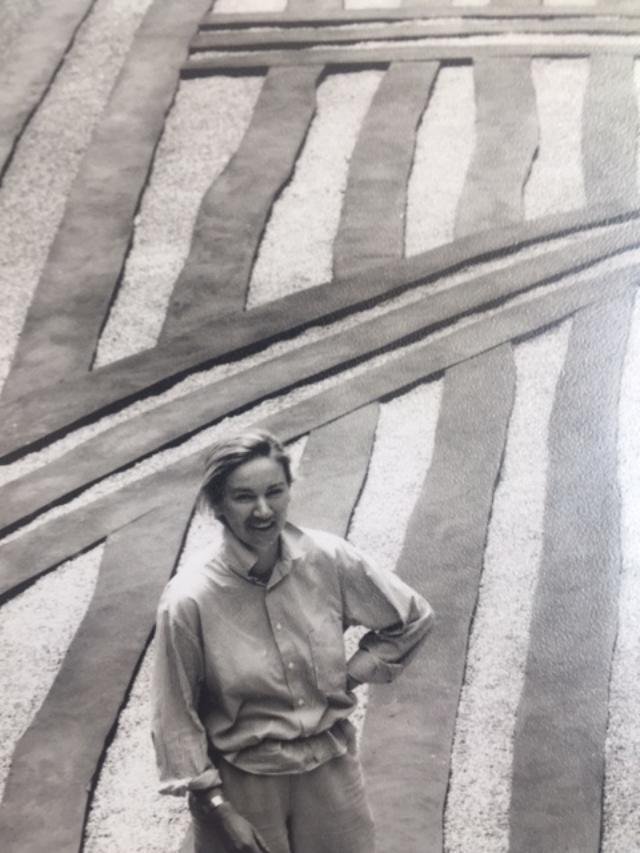 The 4-ton tree installations required the Biennale crane for five days, a team of 20, and a pickaxe too. Digging a hole in Venice is a dangerous operation! The five bonsais included one tall 20ft Scots pine, which Biennale director, Giovanni Carandente liked so much he requested it be put in the place of honour at the Biennale entrance, central to the main avenue. Scotland was impossible to miss.

The dominant element linking Venice and Watson’s home, Aberdeen, is obviously water, so he took this as his theme. Traditional boat masts, ropes, fishermen’s gear: all featured in his bold 36ft wide sunburst sail pyramid, Across the Sea which also references standard yellow, bright orange and black worn by oil rig workers. The polarities of hope and despair common to a seagoing nation were reflected in the crucifix-like rank of oilskins, and the optimistic burst of Turneresque sunrise.
Watson went on to be Head of Graduate Studies at Dundee and President of the RSA 2012-18. Today all three artists are busy professionally, with many projects in hand. Mach is making his first foray into architecture. Whiteford awarded OBE in 2001, is involved with a monumental land drawing in Cambridgeshire which, she says, “In some ways goes back to the piece I made in Venice.”

Let the Biennale director have the last word. “In 1990 the land of the Stuarts is added to the English participation to reaffirm the unity and vitality of Great Britain and its artistic production.” I wonder if he could say that now?

In times like these, this landmark pioneering event deserves to be celebrated as a memorable achievement, so a Guide to Venice 1990 has at last been made, which will shortly be available on social media.