For the first time as a one-off, the 167-year-old SCOTTISH SOCIETY OF ARTISTS has joined forces with the younger VISUAL ARTS SCOTLAND selecting 160 artists from an open submission of 1000 to fill Edinburgh’s palatial RSA building. Though based in Scotland, it’s open to artists worldwide. I was impressed.

The exhibition has a very particular aesthetic, is rigorous, even tightly curated, beautifully installed, and unlike most big group shows with their annual hodgepodge displays, presents a remarkably coherent, if geometrically monochromatic, whole. It is as though one person with a strong cohesive vision has held the reins.

So how to achieve this when selecting 166 artists from over 2000? Via IT of course. Till recently artists sent in their pictures to be lined up and judged. New technology – the mundane fact of submission via digital jpeg – has moved the goal posts. Today it’s easy to scroll through on-screen images and delete certain categories or styles. Delete all figurative oil paintings, delete all gestural landscapes, all impasto colour, pattern, dogs, cats, flowers, still life … etc. The possibilities are endless. Is this a good thing? I’m not convinced. It works this time, but for sure has altered the geography. 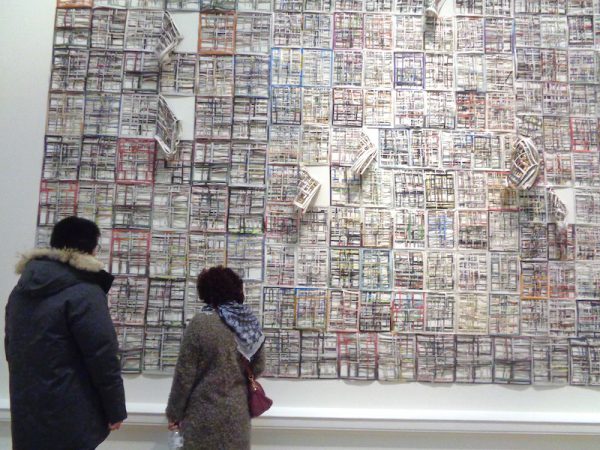 Artists societies exist world wide. Every big city has one, London, Lyon, Philadelphia, Glasgow, Sydney, often founded in Victorian times. Many had ‘royal’ support. Some like the RA are celebrating their 250 b-day. Others were short lived. New Mexico’s Taos Society of Artists disbanded in 1927 after a mere 12 years yet contributed to the development of an international art colony. There are societies for watercolours, pastels, animals, women. The Society of Female Artists was established in London in 1855. Whatever the mix, always the main aim of these artist-run bodies is to provide their members with a place to exhibit. The result is usually a hodgepodge – but not this time.

Scotland’s SSA has a superb 1826 neoclassical home in Edinburgh’s famous Princes Street RSA building and a long history of innovation. Founded in 1851 as a breakaway group from the establishment Royal Scottish Academy, past exhibitors included Glasgow Boys like Guthrie & McTaggart, Gauguin, Cezanne, Matisse, Van Gogh in 1913; Picasso, Daumier, Degas and Forain in 1922. In 1931, the highly controversial Munch. Joan Eardley in the 50s, Paolozzi in the 1970s.

The younger Visual Arts Scotland (VAS) was founded in 1924 as the Scottish Society of Women Artists, became the Scottish Artists and Artists Craftsmen, (SSWA), and invited men in in 1989. This organisation traditionally includes applied arts. Exhibitors have included Joan Eardley, Barbara Hepworth, Elizabeth Frink, Lucie Rie, and recently Rachel MacLean who represented Scotland at the 2017 Venice Biennale. For too long the words women and crafts were to be avoided, but here they are celebrated via support from Craft Scotland and the Inches Carr Trust.

I have been writing about both organisations since 1981, so have seen many ups and downs. In 1983 & 1989 there was a battle re retro-active RSA rent increase plus the start of the NGS elbowing its way in, still problems today. As 1989 president, George Wyllie rallied over 1000 protestors. At the 90th anniversary in 1984 photography was allowed in with Joshua Cooper & Pradip Malde setting the bar high. All well overdue as Hill Adamson exhibited their calotypes in the self-same building in 1844! 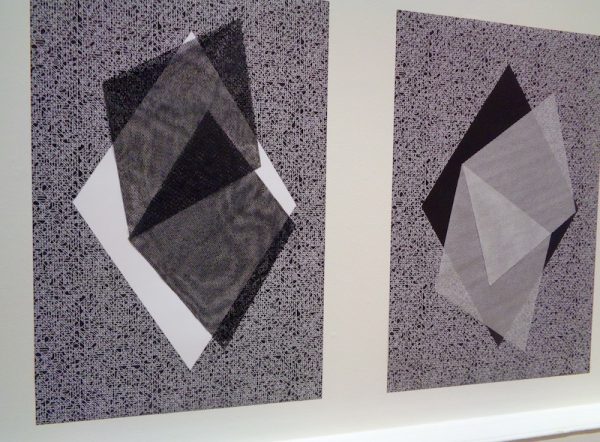 But the crux here is of Scottish professional artists of all ages. Maybe the lack of well-known names reflects the rigid selection, the expense, or that many no longer bother to submit. Perhaps, for the sake of the public, it would be a good idea to invite a few older folk?

The current show includes some huge sculptures and big wall hangings, not all good. The scale of the RSA galleries does demand size but makes for difficulties. Annie Mulvey and Tom Stephenson tried but failed to make an impact with massive hangings and heavy charred black logs. Even more problematic is Sven Werner’s ‘Observer Cinema’, a large installation of black & white portrait heads arrayed on sticks. Claimed to be a multimedia piece, it puzzles visitors – not in a good way. It turns out the echoing noise filling the gallery is part of it but coming from a far distant lectern.

Only Aileen Paton’s inventive and cost-effective grid of cut-paper, Deirdre Macleod’s huge sheets of erased graphite on paper and William Braithwaite’s brutalist totem-like sculptures manage to hold their own, along with a splendid, evocative wall drawing by Rowan Paton. Felicity Bristow also makes an interesting intervention with her strange linked books. 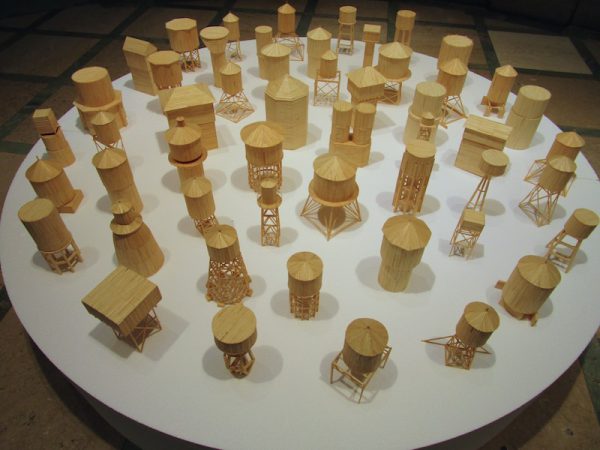 The so-called sculpture court at the top of the RSA’s grand marble staircase also features interesting pieces like Alan Bond”s interlocking life-size doors and Rebecca Heselton’s shadow-play Cambodian village while Tim Taylor’s ‘Sacred Vessels’ (shades of the Bechers water towers) are among the very few curves to be seen.

Way back in 1984 it was a big day when photography was admitted, but there is little of interest here. Later installation & video were allowed – but again a lack of exciting or serious current work is worrying. 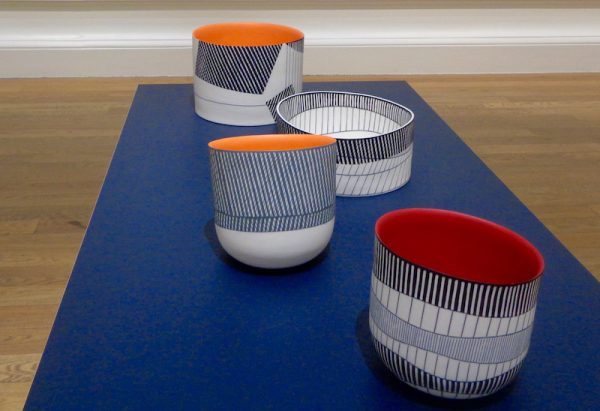 All these works are for sale, and VAS traditionally includes jewellery, where I have sometimes bought lovely things, like Isla Christie’s ‘Digital Icons’ which explore appealing geometric earrings in bold colour.

Two galleries focus particularly on VAS exhibits, including a large array of glass in all its myriad forms from Jeff Zimmer who ricochets from fragile etched pieces to banal mirror message, then on to very inventive military drone cloudscapes, perhaps the most disquieting and sophisticated piece on show. Carrie Fertig’s clear glass animals and Lorna Fraser’s porcelain add variety. 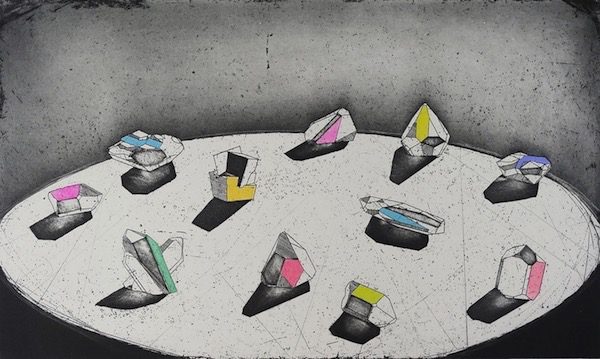 This elegant exhibition has one drawback. After so much similar geometry, so many straight lines, acute angles, tangents and monochrome minimalism, one longs for sheer visual pleasure, hard to come by here. What a joy to catch sight of James Lumsden’s scarlet and blue buzz and Fiona Havelock luscious still life jug. “Senseless acts of beauty” Watson would say, but “I still love that.”