Sgt Pepper At 50 is the 50th anniversary of the original album by The Beatles and through this festival has become a newly ‘re-imagined album’ of artworks, theater, music and dance pieces. Do go and explore the events of this festival. There are many interesting ideas taking place that draw inspiration from Sgt Pepper, where artists have woven concepts from the original album in new and innovative ways. Works by each artist are based upon songs from the album. For instance, ‘With a Little Help From My Friends’ presented by Metal exhibits new work by Turner Prize winning artist, Jeremy Deller whose work is inspired by the Beatles best friend, Brian Epstein.

Head on citywide or up towards Liverpool Hope University way and along the motorway you will find a giant billboard displaying the words, ‘Epstein died for you’ and on the reverse of the billboard a giant photograph of Epstein. I wasn’t sure what to make of this. I felt it was too dramatic, to be honest. I enjoyed the visual idea of Epstein’s photograph large scale but the words felt preachy, turning us the public, the feeling was somehow  ‘nonbelievers’, those without a ‘faith’. However, it was thought provoking. 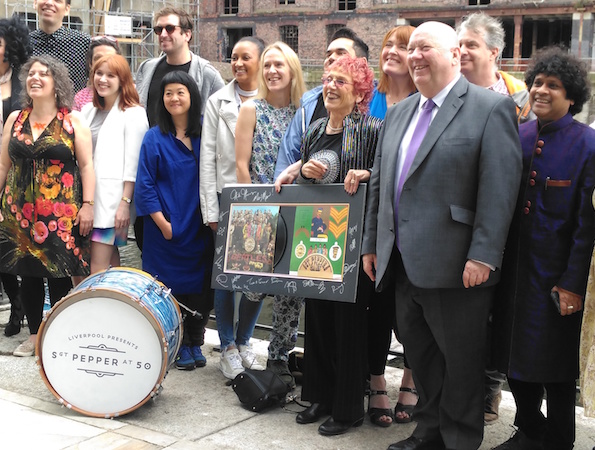 Earlier in the day, I was at the Titanic Hotel. The American feminist, Judy Chicago had painted a mural on the side of The White Tompkins And Courage Grain Silo, Stanley Dock building next to The Tobacco Warehouse. This icon of an artist sat down outside the hotel being photographed. Her mural, ‘Fixing a Hole’ responds to the lyrics with a vibrant mural. You can also catch some great views of it as you drive by and see it flit in-between the buildings.  This is Judy Chicago’s largest painting to date. The mural links her ‘natural colour sense to the psychedelic hues that dominated so much of 1960s popular art’. The mural reminded me of many grassroots Beatle murals throughout Liverpool which I felt was interesting. I think seeing many of these artworks responding to the album was in some way so intersected with the thoughts of so many artists that each artist’s autonomy was somehow overpowered. I think this was because the response to such a strong album as Sgt Pepper spiritually connected to the creative thoughts of others. However, this was interesting and good, I  felt in many ways. It also highlighted Liverpool Life. I have to confess I find it quite a strange feeling being a Beatle tourist in my own city, on a mystery bus going up the Princes Avenue and a guide talking about this place, I lived for ten years in this area, a deprived section, with Ringo Starr’s house around the corner. People live in this community. It is very poor and there are gangs and difficulties as well as shootings mixed in with many lovely people, creatives also. I just couldn’t help thinking, for goodness sake get a grip and focus on other important issues in this community instead. However, it was a Beatles tour so I changed my focus to keep on track.

There is an interesting film on at Liverpool Museum. It is inspired by the song A Day in the Life. (24 zero hours) an interesting experimental Movie that explores time and dementia by Frank Cottrell-Boyce with Hurricane Films and Carl Hunter. I would highly recommend seeing this. (16th June, Woolton Picture House).

Also not to be missed is Within You, Without You. The Beatles Ragafest & Indian Festival Village by Milapfest on 11th June, St George’s Hall.

Further songs being explored were Lovely Rita by Meow Meow and her sleepless beauties with the Kazimier in her performance Rita Riot/Rita Dreaming/ Rita Requiem. This looked really interesting from many angles through costume, art, and performance. A free event, 10 – 11 June, Hope Street, Metropolitan Cathedral, Oratory, Liverpool Cathedral and St James. Other events also include the John Cage Trust creating a performance with performers of Liverpool at Aintree Racecourse this Sunday.

The main highlight for me during the launch was a creative performance of fireworks inspired by the song Lucy in the Sky with Diamonds. Suspended Time by Christophe Berthonneau and Groupe F at Camp Hill. It was just magnificent and I will never forget it.

The festival is worth exploring. There is some real talent within the events and will shed new light upon the album of Sgt Pepper. The only thing I would add to this is that Sgt Pepper would work so well, grassroots also. Let’s not lose sight of creativity in all its guises. I think a large festival in one area such as a park for a day where everyone can get involved on many levels is also important for the heritage of the album and people of Liverpool and beyond. Programmes of this festival are available throughout the city. Don’t miss out! Events have begun!