I first encountered Sister Wendy Beckett in the pages of ‘Modern Painters’, the art magazine founded by the art critic Peter Fuller which ‘celebrated the critical imagination; stood up for aesthetic values and had a particular focus on British art.’

An early piece would have been a review of an exhibition by Norman Adams in which she suggested that a mystical sense of oneness was making itself visible in his work. In ‘The Way of the Cross and the Paradise Garden’ she noted a radiance of joy conveyed by ‘angels somersaulting through a dazzle of colour bars, crosses of light, that proclaims the marvellous oneness of the Death of Christ and His Rising.’

Adams featured regularly in Beckett’s prayerful meditations on artworks exemplified by ‘The Gaze of Love’ and ‘The Mystical Now’, as did Albert Herbert, described by Beckett as a ‘religious painter of genius’. I first encountered Herbert’s work in 1989 through the Art in Worship exhibition that was shown at Tewkesbury Abbey and Worcester Cathedral and to which Beckett contributed commentaries. Herbert believed that universal experiences cannot be better expressed than through Biblical imagery: ‘The painting of Moses climbing the mountain and speaking to God in a cloud, is about the incomprehensible; God is beyond understanding, it is the revelation coming from outside the tangible world of the senses. It cannot be put better than in this Biblical image of something hidden from you by a cloud; and you going upwards with great difficulty, away from the ordinary world, and looking for something hidden from you.’

For Herbert, to arrive at this fusion of ideas and form took over thirty years, including years when he resisted his impulses and took his painting in other directions altogether. He was rescued from this stagnation by, in a sense, being born again through study of children’s art which enabled him to make the etchings that returned him to figurative, emotive symbolism. These etchings laid the foundation for the Biblical paintings which then attracted the attention of Beckett and Patrick Reyntiens, who began to speak of him as a significant religious painter. Beckett commented that his art ‘comes from so deep in the psyche that it almost forces itself out’. 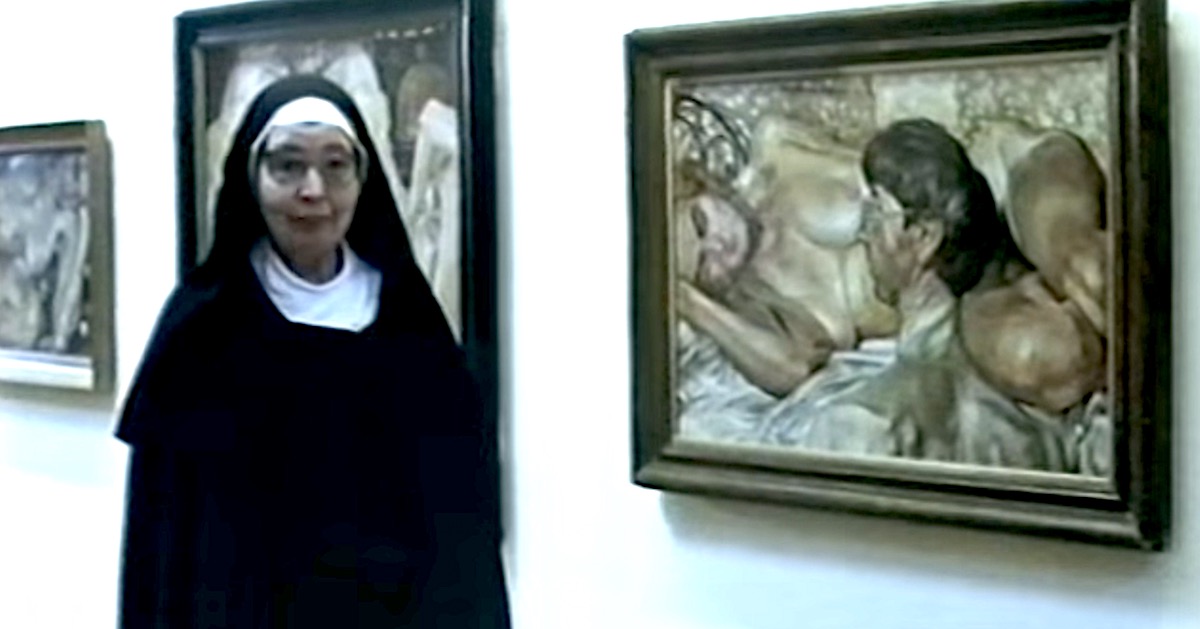 In a review of ‘The Christ Journey’ for ‘Art & Christianity’ I noted that Beckett, who wrote meditations on the artworks by Greg Tricker which featured in the book, is an informed enthusiast who applies the instruction in Philippians 4:8, to fill your minds with those things that are good and that deserve praise, to her writing and presenting. The kind of poring and praying over images that characterises Beckett’s best writing can be a distinctively Christian contribution to the plurality of art criticism and can be cultivated through a framework that encourages a sustained contemplation of the artwork and which notes our personal responses to each facet of the work as well as their cumulative impact. Beckett cultivated a prayerful attentiveness to the artwork through sustained contemplation in order to see or sense what is good and of God in it, regardless of whether the artist who made it had an international, national, regional or local reputation.

At the most basic level, charitable hermeneutic demands that as I strive to make sense of any given work, I must regard the person who made it and presented it as someone who may experience life radically different than I do but who is every bit as much an ‘I’ as I am. She is a ‘me’. To love one’s neighbour in the practice of art criticism is to attend carefully to this particular work she has made, to receive it on its own terms (or at least in terms that are appropriate to it), and to try to name the ways that important human concerns, longings, joys, laments, failures, and so on are active in the work and have some bearing on me today. This certainly doesn’t mean that we remain uncritical, but it does mean that we are patient in trying to really see what another person has been concerned with.’

This, I believe, was essentially the approach that Beckett applied to her writing. It was also the approach that she applied to Fuller’s understanding of art as a search for the spiritual, as redemptive: ‘His love was a moral passion. It was God he sought so single-mindedly, a God in whom he longed to believe but could not. The last time we were together, I told him I thought he was very close to God but did not yet know His name. He gave me that singularly sweet smile of his, and replied, “So you say, Wendy, so you say”.
Peter, rightly, could only accept truth on his own say so – and now he does. I have no doubt at all that Peter now sees with overwhelming joy the truth of that Beauty he searched after with such persistence and dedication. He saw God anonymously as it were in the beauty of art, but not “face to face”.’
In ‘The Christ Journey’ she wrote that it is Tricker’s ‘profound conviction that the Christ Journey is for each of us, our own journey’: ‘We do not make it alone or in our own power. Of ourselves, we are helpless spiritually to put one foot ahead of another. But in Jesus, we journey strongly and surely. It is not that we take the same journey. Jesus is our Journey. If our faith cannot accept this and live out its consequences, then we have no faith at all. We either journey in the Christ Journey, or we stay lost, on the shore.’
Beckett called the artist Dora Holzhandler, a close friend in later years, ‘an artist with a beautiful secret … that makes all things luminous … a precious gift in this confused and violent world’; that same tribute can be applied to Beckett’s own life and writing.

Revd Jonathan Evens is Associate Vicar for Partnership Development at St Martin-in-the-Fields, London. Through HeartEdge, a network of churches, he encourages congregations to engage with culture, compassion and commerce. Jonathan is also secretary to commission4mission.