Visiting The Institute of Contemporary Art at the University of Pennsylvania reminded me of how important and sometimes more impactful smaller museums are. They instigate absorbing surveys in the limited confines of limited space with creatively conceived moving walls expanding and receding based on each exhibit, allowing viewers more energy to be focused on a few exhibitions and not spread-out like an amusement park full of metaphors and beautiful images. Also, the ICA can harvest and support upcoming talent without worrying about blockbuster attendance and appeal. Almost like a boutique store where the goods are fewer but are all well-considered.

In comparison to the sometimes overwhelming blur of a multitude of experiences peppered with a tanker of people roaming the hallways of more extensive facilities after feeding upon the mystical imagination realised by countless mega geniuses, it is less overwhelming. There is a lot of square footage in the Museum of Modern Art’s 50,000 square-feet (about 4,600 square meters) that is soon to open as opposed to a fraction of well-planned and defined space; it will be a contest to traverse and see as much as possible. A smaller museum is akin to dining thoughtfully, savouring each artists brilliance without feeling like you’ve got to rush into the next course. 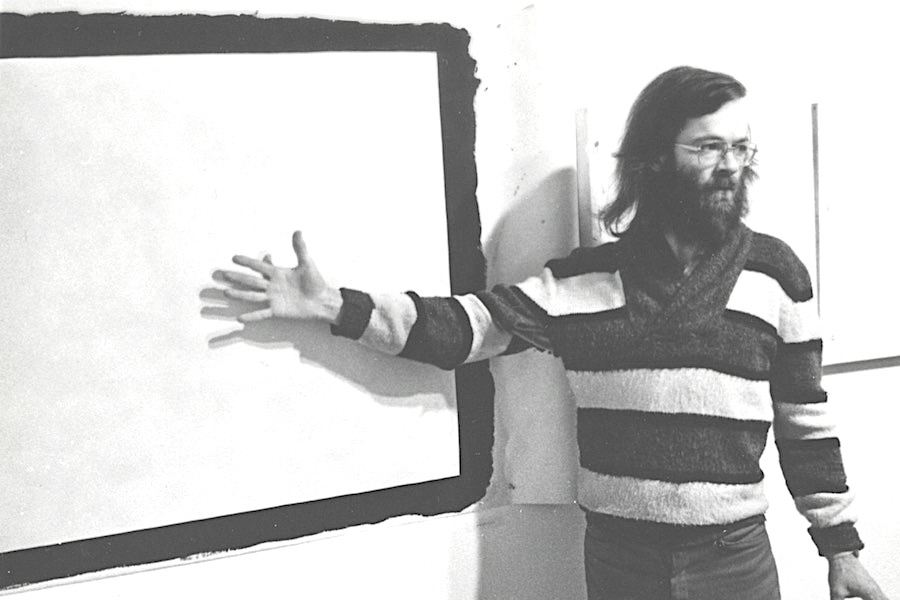 A groundbreaker in the experimental world of art Tony Conrad’s body of work is extensive. With over 60 years executing a breadth of unique work unequalled. His oeuvre includes sound, video, music, painting, sculpture and direct three-dimensional representative socio-political concerns demonstrated in a large installation. When placed in the quiet space of a gallery setting his imagination takes the viewer into a tactile world of cultural abandon; into his deeply intellectual and sensitive mind in which he often made things up as he made discoveries with little preconceived device. He reveals social nuance as he pushes the boundaries of experimentation.

Conrad was a person who broke cultural patterns down and put them back together into a jigsaw puzzle of systemic awakening which contrived to have us “see and hear” culture in a fresh way. As amusing and enchanting as his “Bench”(2008) musical swing is to sit in and play; his exploration into a woman’s prison; a cell in which he manufactured action to scrutinise the female experience built-in his expansive studio where he filmed WiP (2013) was the opposite, requiring a deeper dive into the guts of the matter. The artists/actors, including men, wore feminine underwear for the filming, which inspired the pensive awareness of sexuality in a confined environment. There are several never before seen works on view. Not only is this show a striking retrospective of Conrad’s work, but it also acts as a time capsule as well. For as he uses so many electronic apparatuses, technology propels him forward into discerning new voices and investigations. Organised at ICA by Daniel and Brett Sundheim, Chief Curator Anthony Elms. It is an elegantly curated, not to be missed show. 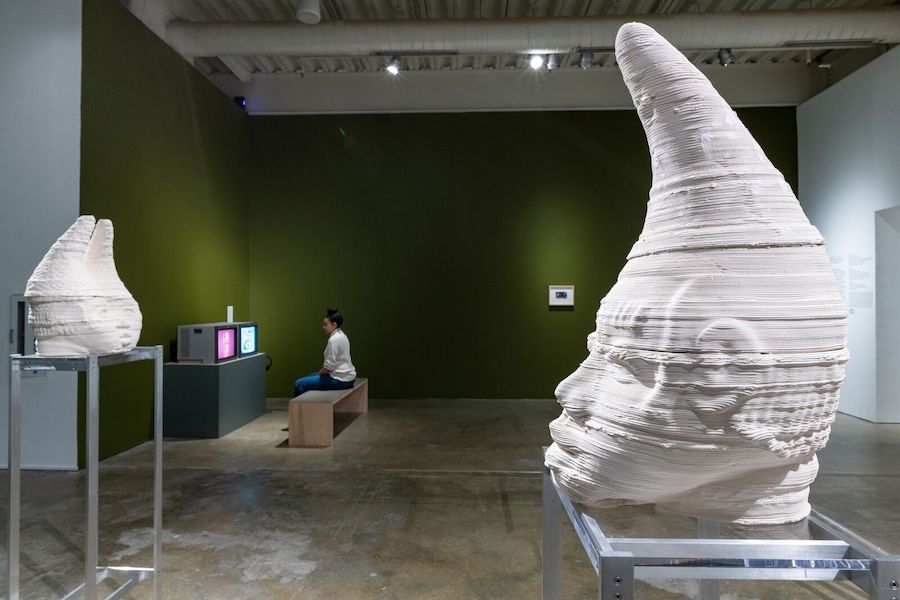 Time moves on for Tony Conrad but, A Retrospective, Colored People Time: Mundane Futures, Quotidian Pasts, Banal futures presents a less linear depiction of time, in this case, we are asked to reflect on it like an accordion file of circumstance and response for African Americans. Materials of historic consequence take us into particular concerns of the African slave and explain the construct of European Western values, for time mobilised, is time well spent and capitalised on. Working in concert with the University of Pennsylvania Museum of Archeology and Anthropology, long archived small but telling artefacts to awaken us to the influences of African art on Western culture and the reactions revealing the idiom of American black culture in its imaginative expression asserting contradiction in contrast. Matthew Angelo Harrison reimagines African art with 3D scanning. He has generated several exquisite “manipulations” of sculptures held in the Penn Museums collection from Angola, the former Benin Kingdom of Nigeria, Cote d’Ivoire, the Democratic Republic of Congo, Ghana, and Sierra Leone. The heads are icons in African art, and they are considered to be exquisite examples of considerable sophistication in execution and materials. The distinction between the crude contemporary 3D laser printer (machine-made) and use of clay which without humanity looks beautiful but empty of soul and craftsmanship, like rough coil pots (human-made) one of the main techniques in hand building clay. I only wish images of the pieces Harrison used for this investigation were part of the exhibition; it would have made it all the more comprehensive. Curated by Meg Onli. 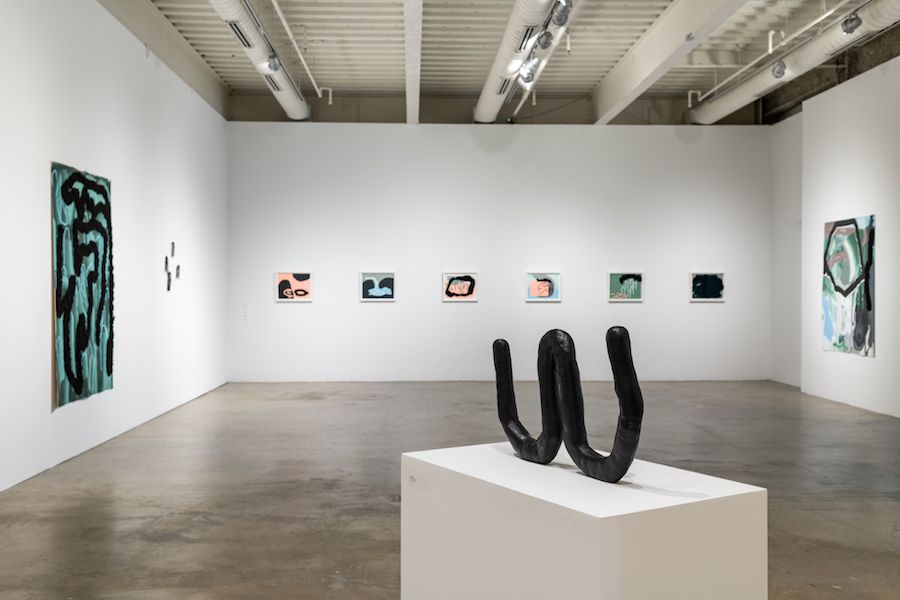 The last extensive gallery displays the first solo show for Jamaican artist Deborah Anzinger, An Unlikely Birth. Full of vibrant colour and life; it includes painting, video, sculpture, and installation. With pastel corals, blues and greens (analogous to camouflage) bifurcated with strong black strokes, shards of mirror and synthetic black woolly materials (African hair) affixed to segments of the surface meant to convey “geographical, ecological, and spatial paradigms.” Her signature black squiggle which looks both floating and abstract while random could also be the beginning of something like calligraphy or knowledge like the obelisk in the film 2001 Space Odyssey. They are mystical elements pervasively dotting the exhibit without contrivance.

In the centre of the exhibit, Anzinger sets up indigenous plant life installed in a wooden shack; a small nursery for vegetation. She aims to disrupt the existing relationships of economics as they pertain to the politics of land, the body, and space” Curated by Daniella Rose King. Anzinger’s show targets our complicated relationship to the environment as well as free enterprise to consider solutions for what lies ahead in our shared future.