Villa Noailles Hyères, France: Last week, thousands celebrated the 33rd International Festival of Fashion, Photography and Accessory Design in Hyères, in the South of France. Celebrities were pouring in and the media was overwhelmed with their images.

The Festival revolves around an international competition open to young designers and photographers, combines a permanent exhibition dedicated to Charles and Marie-Laure de Noailles, panel discussions and exhibitions in the Villa and in town and catwalks in an old barn just off the road to Giens. 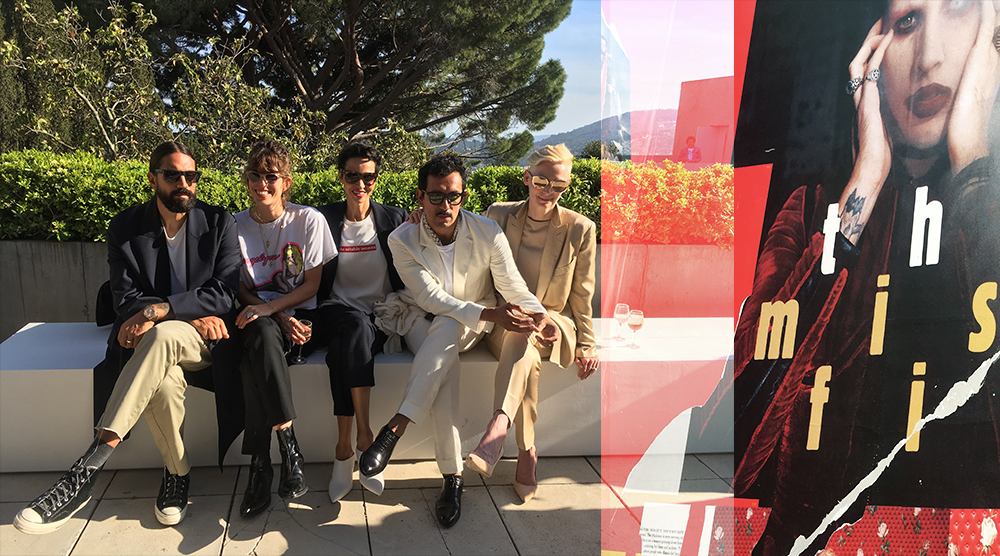 During five executive days, the Villa Noailles is packed with editors, designers, agents, international models, students and members of the industry, perfectly orchestrated by Sylvie Grumbach and her 2e Bureau team. This year Haider Ackermann, Bettina Rheims and Christelle Kocher presided the jury with Tilda Swinton, Lou Doillon, Eli Top, Michele Lamy, Ben Gorham and Jefferson Hack of Dazed Media amongst the nearly 30 jury members.
The Festival with its partners, the House of Chanel, LVMH, Swarowski, Chloé, Première Vision, the Galeries Lafayette group and under the direction of the jury of professionals the winners are carefully selected in each category, offering them a unique opportunity in their career.
There is not much more can be said about the Festival except it is always a magical experience with beautiful meetings, professional exchange, long walks, beaches, parties, dinners at Chez Lulu and morning coffees at the pool.

Having said that, as a journalist, I am always more intrigued by the roots and background history, which are, in this case, beautifully preserved by Jean-Pierre Blanc, the director of the Festival and the Villa Noailles. So, here’s the story. 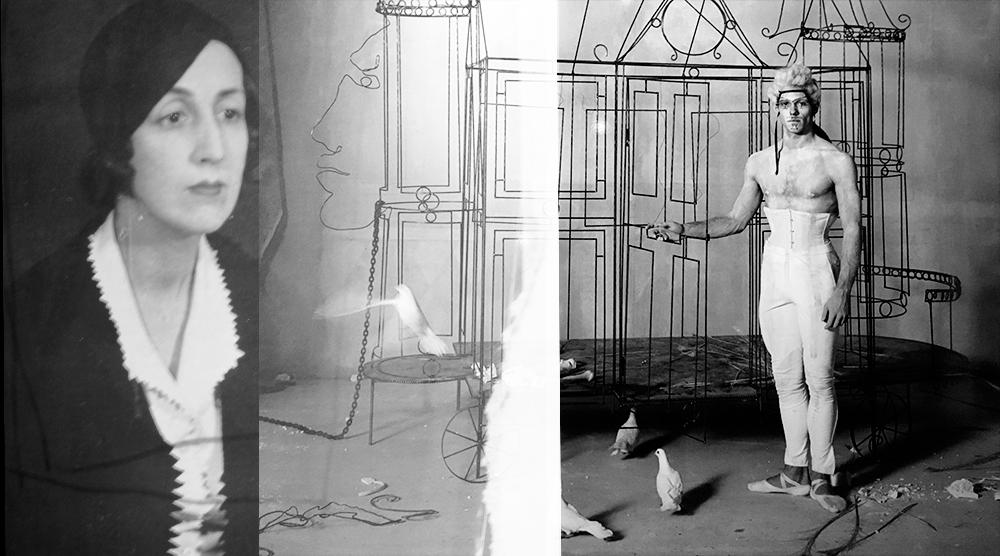 We are back in 1923, after a long night in the “hôtel particular” at 11 Place des États-Unis in Paris, after a private screening and party given by one of the most daring and influential 20th Century’s art patrons, Marie-Laure de Noailles and her handsome, courteous, well-educated husband Charles, who likes men and flowers more than anything else. Champagne was pouring all night and friends were amusing themselves scrupulously as ever.

The Vicomtesse, the direct descendant of a wealthy German banking family and a French aristocratic clan, the pioneer of modernist sensibility had long been at the center of the Parisian avant-garde style. With far-ranging vision, she kept the engine of innovation running among the Surrealists.
The de Noailles’s art collection is vast and exquisite with works by Max Ernst, Man Ray, Francis Picabia, Giorgio de Chirico, Salvador Dali, Yves Tanguy, Goya, Mondrian …

According to Laurence Benaïm, in her book “Marie-Laure de Noailles: The Vicomtesse of the Bizarre”, the intellectually precocious Marie-Laure was apparently reading Mallarmé and Poe before the age of ten and reciting Baudelaire for family guests. At age twenty, in 1923, she married the Vicomte de Noailles.

Ned Rorem once wrote of her: “Marie-Laure is, first of all, a child, second, an artist, third, a Vicomtesse, fourth, she’s a saint, fifth, a masochist and sixth, a malicious bitch. Above all, she is generous, not to mention crazy.” 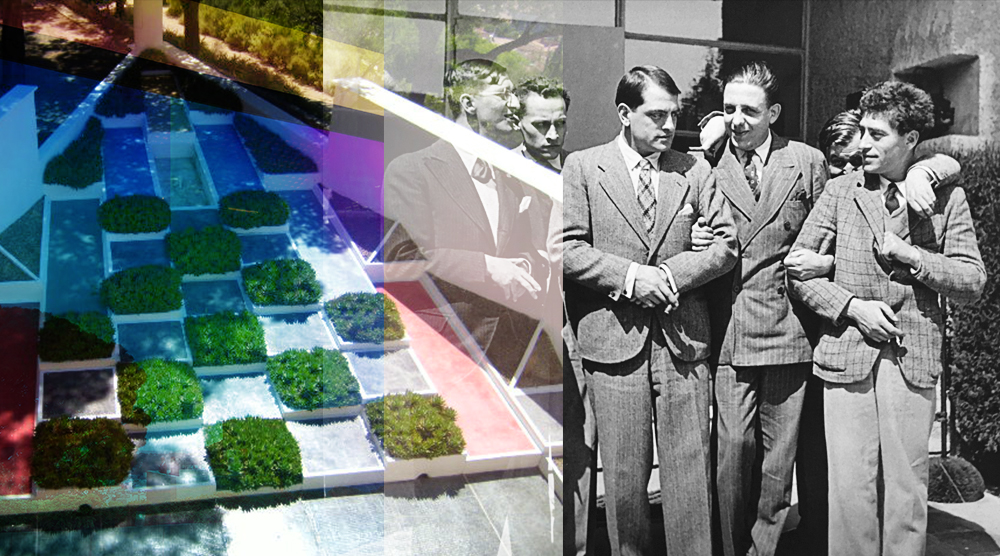 It’s a lazy morning. The cars are waiting. While smoking a cigarette she is deeply involved with a conversation with her rebelliously young decorator Jean-Michel Frank. Gertrude Stein is still asleep but we are almost ready to leave and drive down to the South of France to a small town called Hyères.

The scenery is breathtaking. Orange and jasmine flowers are inescapably everywhere. Standing on the rocks with a book of Hölderlin, someone brings a glass of champagne. The view is spectacular. I walk around with Robert and laugh. The moment is perfect and the idea is born, we all want a villa for the summer on that very spot. 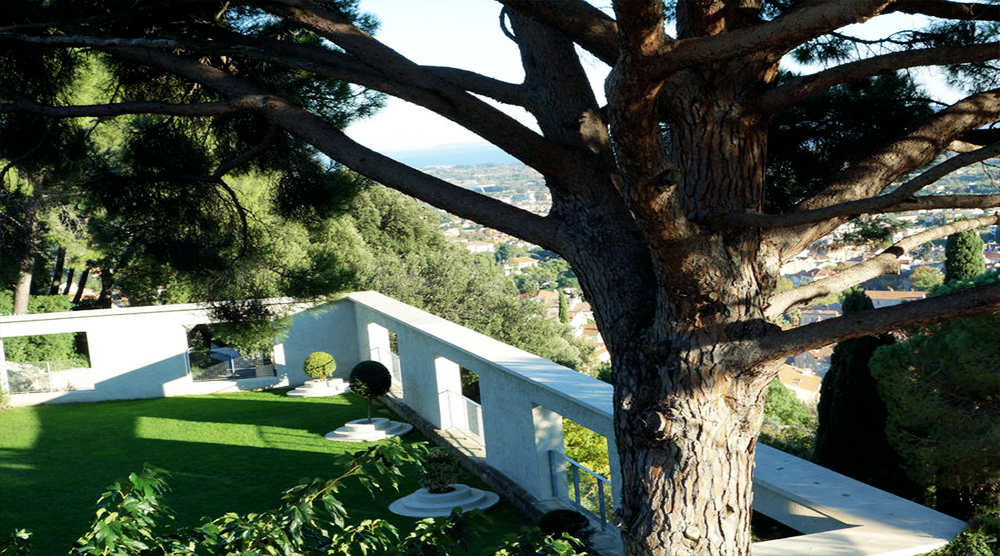 The garden at Villa Noailles / Photo © Courtesy of ZOLTAN+

After Mies van der Rohe is too busy and Le Corbusier with his off-putting didactic personality, the Villa Noailles was eventually constructed by the architect Robert Mallet-Stevens between 1923 and 1927 on the land offered by Charles’s mother for his wedding, a groundbreaking, early modernist concrete building looking like a Cubist cruise ship, a strangely obscure labyrinth in which guests constantly lost their way.

Spanning over 1800sqm, the house consists of a fine blend of something like 50 monastic guestrooms with terraces, a large salon with no windows just a bizarre geometric skylight, a first-floor covered swimming pool, an athletic center, squash, precious artworks and a triangular Cubist garden designed by Gabriel Guevrekian. The Villa was an avant-garde masterpiece of the 20th Century, an artistic hub for the rich and famous and a perfect meeting place for contemporary art and flamboyant artists.

The interior was created by Jean-Michel Frank, who once said: “The last touch of elegance is elimination”.

The de Noailles often had film screenings at home. Guests sometimes left socked, sometimes the police had to intervene and confiscate Buñuel’s “L’Age d’Or”. Buñuel said: “Sucking on the big toe of a statue of the Pope and mocking all that is sacred “. At one point, even the bishop of Paris was alerted and Charles’s mother had to go to Rome for a chat with the Pope to save Charles from being excommunicated. 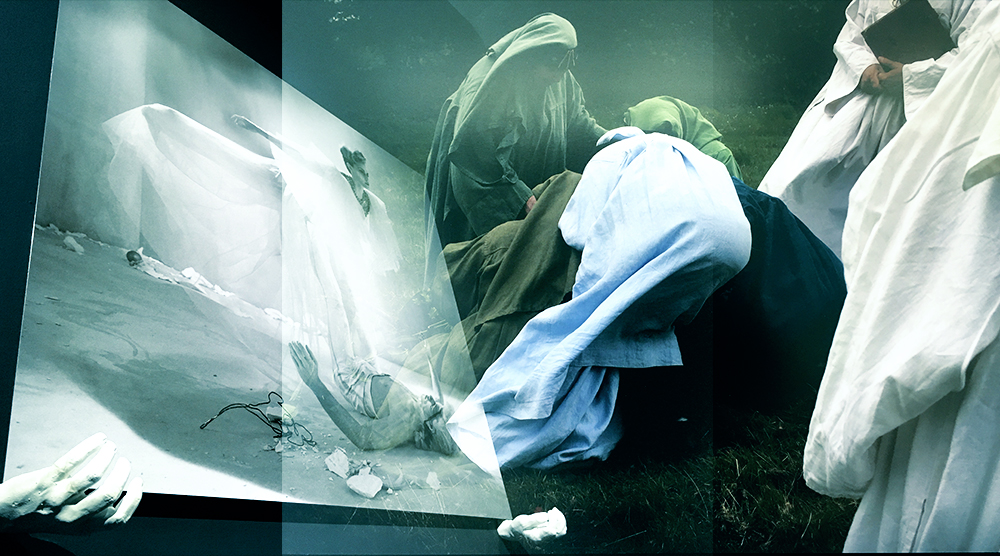 Scandal is, however, the best friend of de Noailles. They do not stop. They finance their friends, commission paintings, photographs, sculptures, support film projects by Man Ray, Jean Cocteau, Luis Buñuel, Constantin Brâncuși, Salvador Dali, Joan Miro, Balthus, Alberto Giacometti, Francis Poulenc.
The Villa is a constant party with eccentric personalities and bohemians. The de Noailles take exceptional pleasure in shocking people and a good hysterical scene with a choice of audience or lovers, gives them great pleasure.
After a brief affair with Edward James, the twenty-one-year-old composer Igor Markevich, who was also the ex-lover of Serge Diaghilev, becomes Marie-Laure’s new love. Her aristocratic arrogance is immune from most ethical and moral prerogatives.

“Until the age of thirty I was timid and soft-spoken, then one day I began to talk and I’ve never stopped since.”

Pierre Bergé, the business partner of Yves Saint Laurent, said in an interview that Charles and Marie-Laure “found their own equilibrium by exerting a destabilizing influence on other people.”

During the war, the Villa Noailles is abandoned, occupied by the Italian army and used as a hospital. From 1947 until 1970, it is again the summer residence of de Noailles but subsequently in 1973 the Villa is purchased by the city of Hyères.

In 1986, Jean-Pierre Blanc dreams big and invents the International Festival of Fashion and Photography with flair of style and aspiration following the creative and artistic tradition of de Noailles. In 2006, he broadens the spectrum and adds Design Parade to the programme, putting architecture and interior design into focus. 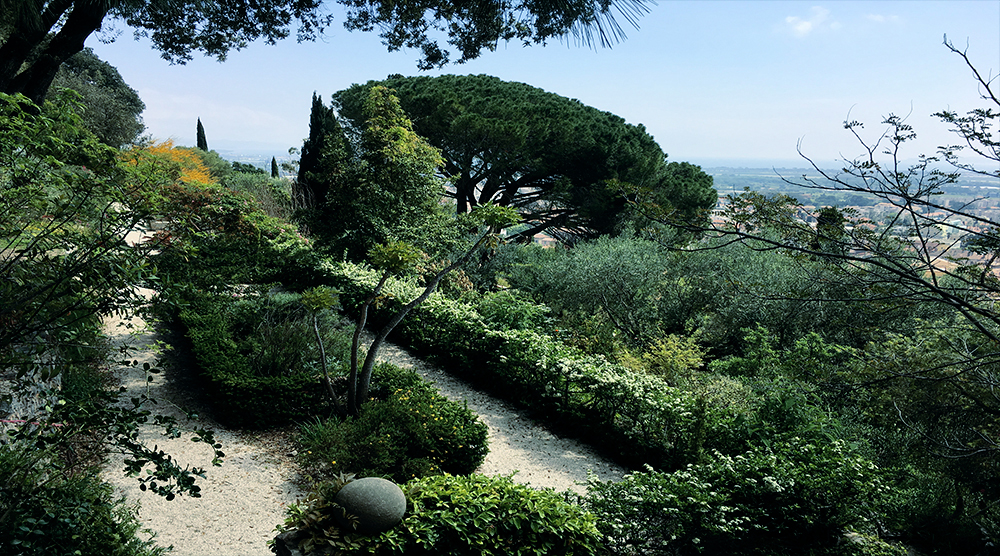 The sun sets slowly in Hyères and it’s always a right time for a walk. Just under the Villa, the Parc Saint-Bernard, the “Jardin Remarquable” offers a perfect view on the town and the distant bay. The garden is designed with narrow paths and terraces filled with exotic plants and rare Mediterranean species well-capturing the Vicomte’s passion for gardening.

Their house in Paris at the Place des États-Unis is now owned by the crystal firm Baccarat, which had Philippe Starck redesign the Jean-Michel Frank interiors. The Bischoffsheim vault at the cemetery of Montparnasse stays silent. Cocteau leaves the garden in Hyères, passing his place to Tilda Swinton. The Festival is ready the take its 34th turn.

Villa Noailles, Hyères, France / Festival d’Hyères between 26 – 30 April 2018 and open to the general public during all summer.