In his current exhibition at Lisson Gallery (‘Only the hand that erases writes the true thing’, to 31 July), Spencer Finch presents new works which continue his long-running investigation of the subtle beauty and mystery of nature and our perception of it. The show contains fascinating considerations of snow, light and a mountain walk, as well as the clouds, fog and mistakes he discussed from his New York studio.

Cloud (cumulus fractus under stratus, Connecticut), 2021, is a drawing of layered clouds. When you get close, you can see it’s made with Scotch Tape. How did you arrive at that medium?

It was an accident of experimentation. I was trying to make pictures of clouds using translucent vellum, and they looked OK, but you could always see the spot where I’d applied the adhesive. At one point, I was using Scotch Tape to hold the vellum to the paper, and I realised I could use the tape as both the adhesive and the material that adhered. After that epiphany, I found a way to build it up to create light and shadow. 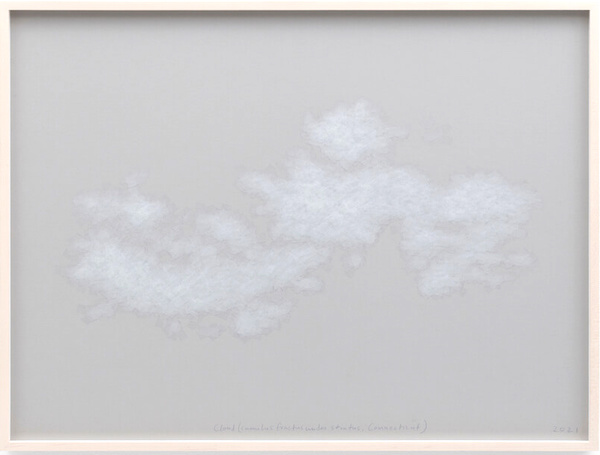 That pares the work down to the essence, and I’ve always liked work where there’s nothing superfluous. Incidentally, the manufacturers won’t say that Scotch Tape is archival, but in tests, I’ve found it lasts much better than any ‘archival tape’!

The ‘Usuyuki’ series summon ‘fog’ and ‘snow upon snow’ simply by layering rectangles of white fabrics on the gallery walls. What is ‘Usuyuki’?

That’s a Japanese term for ‘light snow’. I have explored making images of fog out of different materials for more than ten years because it is a subject that is both material and immaterial, which conceals but also reveals in unexpected ways. I worked with a Japanese fabric specialist and New York fashion shops to accumulate the correct weights of tulle and chiffon, which I layered to create suggestions of landscapes veiled by fog, mist or ice. They change in real-time as the light in the space changes, so it’s great to have them up at a time of year when there’s so much daylight in London.

What do you hope people will see in them?

The construction of these works is intentionally simple and matter-of-fact: I didn’t want any tricks – like theatrical lighting or frame built up around it – I want it to be very clear what’s going on. But the optics are quite complex.

Not only do the various layers of fabric vibrate back and forth in the picture plane, but the shadows created by the edges of different layers add an additional degree of visual complexity. What I enjoy most is the ever-changing dialogue between the material and the light in the space – but that happens very gradually. The changes are very subtle.

I remember as a student spending lunch hours with Ad Reinhardt paintings that changed with the viewing conditions, and that’s the sort of meditative art-viewing experience I was striving for. It’s really about the edge of seeing, where you question your own vision and perception – for a moment it can look like fog or snow piled up, and then it all falls apart, becoming just this fabric on the wall. That back and forth is really interesting to me: it’s about seeing ourselves seeing, experiencing our own perception.

Do you ever worry that there’s ‘not enough there’?

I do, but often if I put more in, it looks bad and I take it out. As Wittgenstein says in Culture and Value, ‘in art, it is hard to say anything as good as saying nothing.’ Perhaps that comes from my being trained by minimalists. Like them, I don’t want to tell people what to think: rather than revealing truths, I create situations to reveal the world in a subtle and complex way. 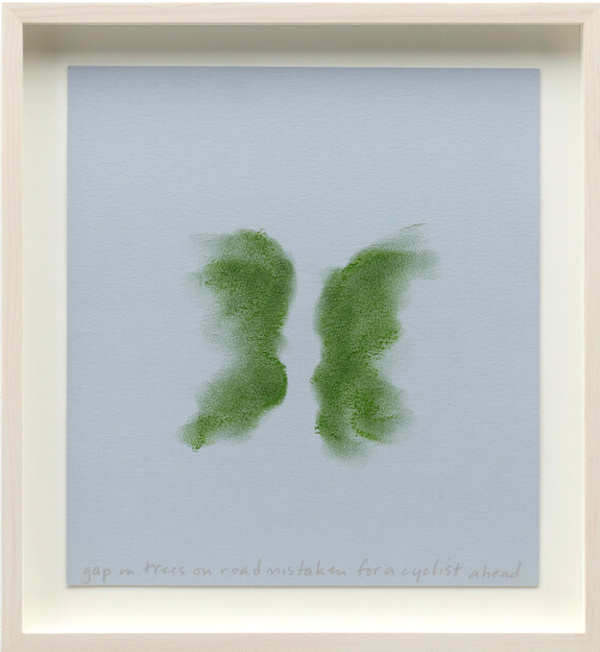 The ‘Mistakes’ series of 25 pastels on coloured paper record moments when you mistook one thing for another, such as ‘wet leaf mistaken for dog poop’ and ‘fleck of parsley on laptop screen mistaken for malware icon’. What led to these works?

For years I have kept a record of perceptual errors that I encounter. I usually laugh when I have one of these moments. For me, these mistakes point to the slipperiness of perception and the beauty of subjectivity, but also to the deeply psychological biases of perception. Sometimes I see what I want to see or am afraid of seeing, rather than what is actually there. Deciding to transform my notes into drawings, I included more detail at first, then realised that they had to be more like a smear: when you make a mistake, you’re obviously not seeing clearly. The coloured paper, I hope, gives a sense of childlike wonder at the ridiculousness of the world and how we experience it.

I found it hard to guess what was shown, so I was drawn in close read the captions. You need the captions, yes, but then the images are intended to be looked at out of the corner of your eye so they can appear to be both things at once, re-creating the ambiguity that I originally experienced.

How wide is the appeal of your way of looking?

I know my work isn’t for everyone – I’ve seen enough people walk in and out quickly! This is work made for people who share the spirit in which it is made. That’s one of the great things about being a visual artist: you don’t have to have mass appeal. I don’t want to be restricted to an elite, but I don’t mind if not everyone finds it interesting, so long as all kinds of people do: not just people previously engaged with visual art, but people walking in off the street.