On a recent trip back to visit my home country Australia, I had the opportunity to visit the recently opened 21st edition of The Biennale of Sydney. The Artistic Director and Curator Mami Kataoka is the first curator from Asia to head the Biennale. Kataoka has chosen the title SUPERPOSITION: Equilibrium & Engagement. The term Superposition is taken from quantum mechanics and describes where a particle overlaps and can be in two different positions at the same time. This idea is useful in the way we think about the layering of meaning and how ideas can function simultaneously within artworks. Of how different conceptual ideas can sit simultaneously on top of each other. Of how something is made can be linked to different ideas and concepts simultaneously.

Perhaps artistic expression is a type of quantum thinking? Strangely and ironically my presence back in Australia had echoes of this as well as I look back on Australia as someone who is returning but also as someone who no longer lives here. A dualistic position, like the quantum particle phenomena of being in two places at the same time, this also opened up to me some of the other themes within Biennale, especially of movement of people across countries and borders. With the influence of the curator Mami Kataoka, it was also great to see such an abundance of work from Asia art alongside Australian and other Western European art. Following on from the previous article where I focused especially on Ai Weiwei and his work commenting on the movement of people and plight of refugees, I wanted to draw out some other notable and completely different works at the Biennale of Sydney. 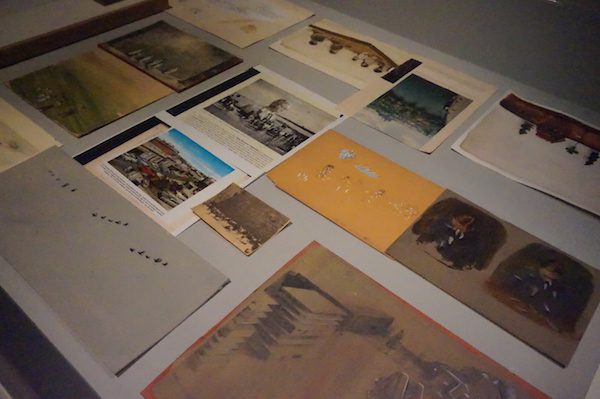 An artist whose paintings I enormously admire. His paintings often eschew subject and narrative; they are more psychological than didactic. Figurative works that look back into the history of European painting in their formalism, but displaced in time in a contemporary context without narrative they become dark, mysterious, psychological works. In the work presented by Micheal Borremans at Artspace in the Gunnery, he has chosen to show the inside of his working process. There was a combination of video works, where you can see how a video could resemble a painting, imbued with an art historical sensibility, they easily could be referencing a painting from the past or perhaps a painting Borremans is about to make. Alongside the videos is a selection of collages, drawings, sketches, small paintings and sculptures all placed within glass cabinets. Under glass we are presented with a condensed image, linking back it to Painting. This is more an exercise in “how too”, not merely “what’s done”. Painting is always process driven and what Borremans has presented here is the mental sketches and links to other material and other media that go into his process. It is a rare snapshot of the thought processes of one of the world’s leading contemporary painters. 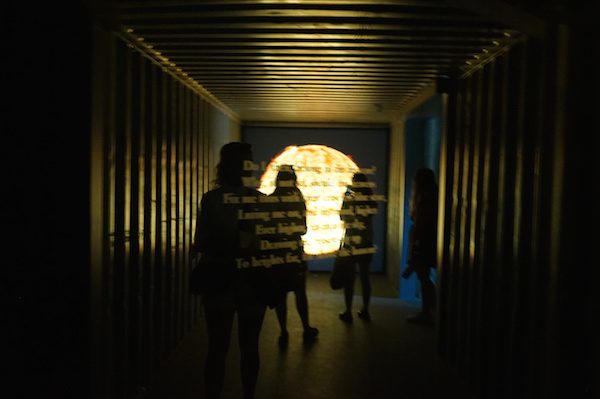 An artist whose three separate artworks stood out for me, initially I hadn’t realised they were by the same artist, indicating to me that it had struck a chord, a real surprise.
First was a dark mirrored labyrinth within shipping containers, meant to reference Icarus inside the Minotaur’s cave. It started with a video projection of the sun with its light flowing through the labyrinth-like an ember, to finding the exit to the blue sky above in the last chamber, a reference to Icarus’ final but futile fatal escape.

The second piece was a replica of the bomb “Little boy “dropped on Hiroshima in 1945; there was an added significance of the placement of this work, suspended on a chain within the “readymade” disused WW2 military shipyard workshop, completely integrated, disguised as a leftover from the war. It could almost be mistaken for one of the many industrial artefacts that are scattered on Cockatoo Island.

Linking to this piece in the adjacent space was a giant eye. A two metre across suspended sphere with a video projection of an iris superimposed with footage of nuclear tests. A giant eyeball witnessing the experiences of nuclear war.
Yanagi is a native of Hiroshima. The works could be linked as a comment on nuclear war, and more broadly a warning of humanities advancement of technology. Less obviously with comparisons to the Icarus in the labyrinth, but with its warning of flying too close to the sun, perhaps there is a hidden connection that is revealed in Yangi’s quote
“Nuclear fusion is like a man-made sun. Our technology is too close to God’s creation.” 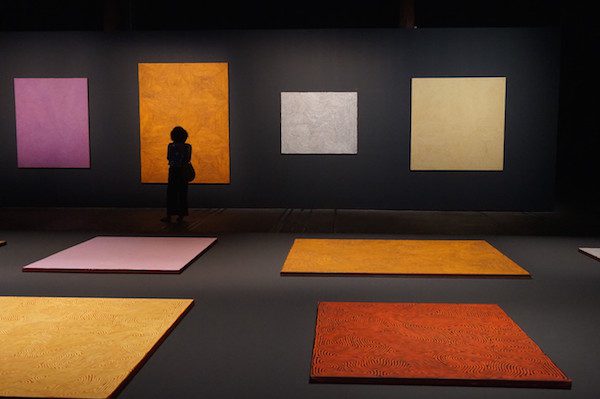 Another standout were the paintings by indigenous artist George Tjungurrayi installed at Carriageworks. Originally from the Gibson desert, a remote western desert painter of the Papunya Tula group. These are incredible luminous optical paintings, a series of monochrome canvases made up of vibrating curving lines. With the canvases placed both on the ground but also vertically on the wall. By installing them in these various positions, it emphasises how they work on multiple levels, both optically or abstractly as paintings, with their nuanced colour and sophisticated optical effects. But also, how they represent the landscape itself, painted in the colours of the desert, like maps of the landscape but also representing the features within the landscape as well like ripples in the sand. 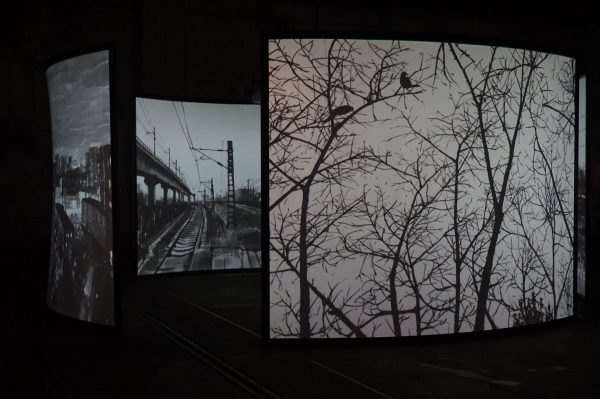 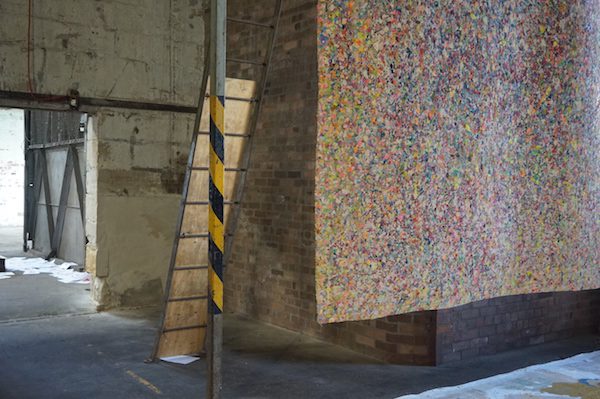 The installation at Cockatoo Island pushes the boundaries of what a painting can be. Large canvases hang from the ceiling like giant marbled works. Meant to represent giant Thai scrolls as monuments to power. There were also large pools of salt water with lumps of paint and pigment floating in it. To me, they were like giant dip trays and the hanging canvas works, although painted, had echoes of giant marbled papers as if they have emerged from these colourful pools and hung to dry. 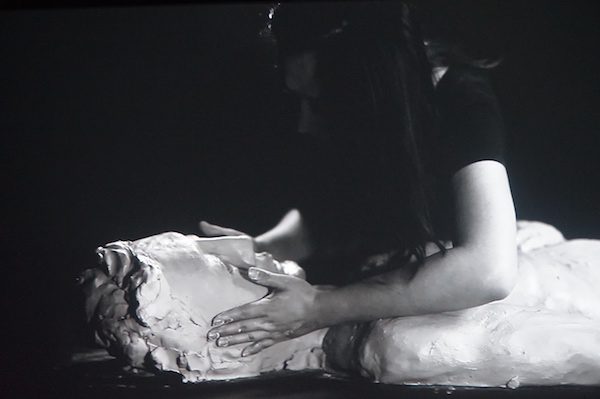 At Artspace, Fascinating film of the artist sculpting a life-size man out of clay, imbuing it with eastern aesthetic philosophy and combining it with a desire to breathe life into the sculpture. Really interesting to see this contemporary insight into the rich aesthetic heritage of traditional Chinese ceramic sculpture, with the artist trying to find a relationship with present art practices. Compelling to watch.

Luciano Fabro. Connected with Arte Povera in Turin, (died in 2007) This work is an investigation into the façade of SS Redentore, Venice. An exploration of architecture and modernism. I liked the use of different toned papers breaking up the historic architecture into a semi modernist grid. AGNSW 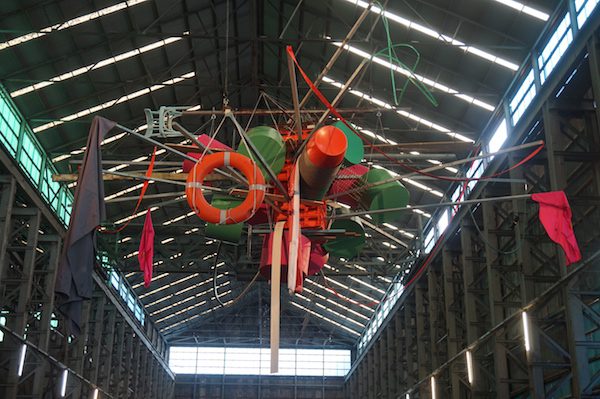 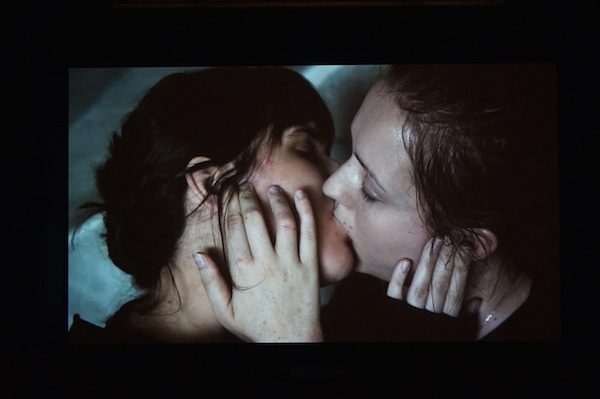 Oliver Beer’s Artistic practice began with music originally and then moved into fine art. His work often deals with sound, performance, architecture and space, as well as objects. His piece I saw at the AGNSW was a video of a performance of two people singing simultaneously into each other’s mouths. There were both a male and female performances, strangely intimate with the two hummed melodies being echoed within each other’s mouths. 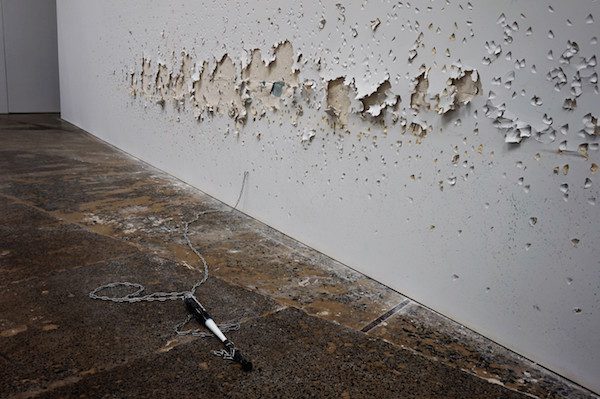 Marco Fusinato is an Australian Artist who is also known as a musician who often explores experimental noise guitar. In his installation at carriage works you hit a wall with a baseball bat, however hidden within the wall is a concert PA amplifying the sound of the impact throughout the space. 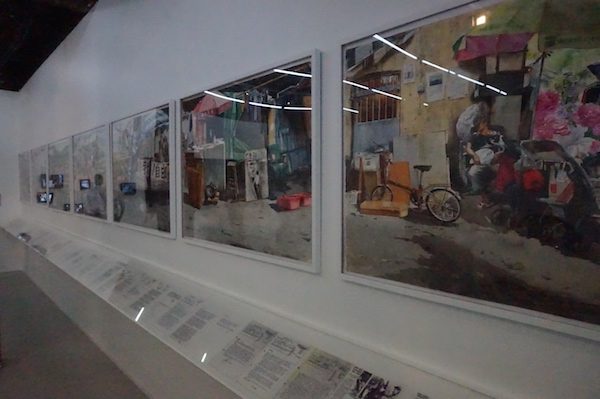 Martin Brown Began his art practice in Australia, originally from Canberra, lived and worked for many years in Sydney, studied Art at the National Art School Sydney and exhibited at Australian Galleries, before relocating to London where he has been for the last 15 years.