Tereza Buskova has been running an art club with the students at Chad Vale Primary since November 2017, and the results are strong and bristling with positive energy. As artist in residence, she has been delivering weekly after-school sessions in which the children explore the works of a different major artist or art movement.

Each week her students produce drawings, paintings and mixed media which catch the energy of the originals

Each week her students produce drawings, paintings and mixed media which catch the energy of the originals. Stimulus signature pieces include ‘Afro Muses’ by Chris Ofili and work by Peter Blake, Lee Krasner, Wassily Kandinsky and movements such as Art Nouveau. For ‘Reconstructed Kafka’ the participants looked at pieces by artist Loui Jover whose work was inspired by Man Ray and other Surrealists. Cutting his head into pieces and filling the gaps with line drawings of machines, planes, steps, dinosaurs they suggested an internal world, deliberately depicting scenes which could be playing out in fiction, the mind or dreams. The contrast between the large photograph and the scale of the narrative comic made the finished pieces highly dramatic. The students used words in a creative way, combining them with the pictures to add more detail and suggest the world of the novelist. 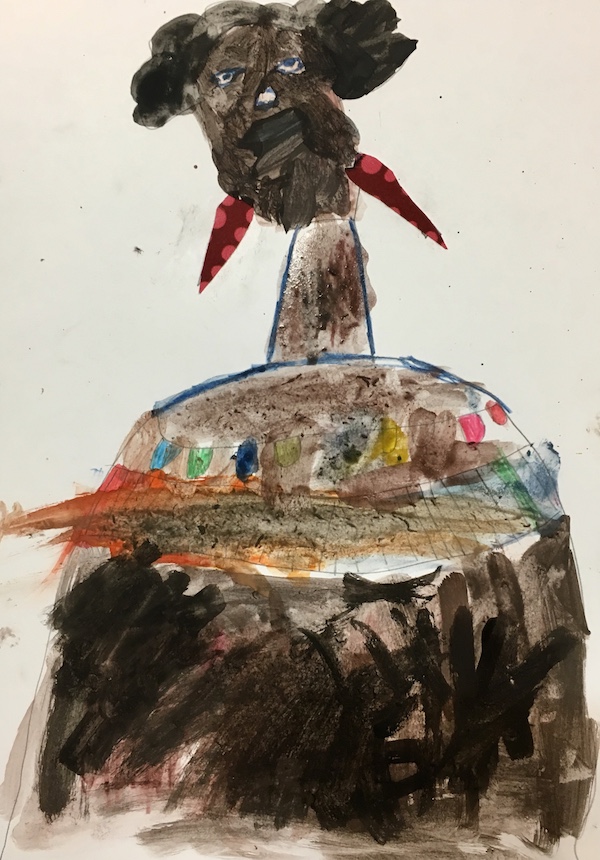 When inspired by Scottish pop artist Eduardo Paolozzi the children were bold with colour, line, repetition and shape. By supplying the class with photocopies to cut up the students were able to take influence from the sense of design directly, adding their felt pen flourishes to the black and white pop collage look of Paolozzi.

Buskova brings contemporary art from those at the height of their careers into the classroom. Damien Hirst’s spin art set an example to the children in how to work in an unusual way, getting away from the simple 2D approach of drawing a picture. I remember my own excitement with spin art stalls as a child, and as a young artist in London at the Joshua Compston’s artist-led street fair, ‘A Fête Worse than Death’. This technique allows us to be inspired by colour, texture and material and embraces decoration.

For the session on Futurism, children used oil on canvas for quite different results, and the subject enabled children to explore buildings, architecture and design. While producing work inspired by Wassily Kandinsky the students listened to Chopin. Ideas of synaesthesia, action drawing, sensual stimulation lift the experience of the art class above those of the ordinary primary school art group. By giving demanding subjects and advanced materials to young, experimenting artists, Buskova is treating children with respect they need to produce outstanding pieces.

Her ambitious art education goes beyond therapy or play. The children have learned of Toyism, the art movement that originated in the 1990s in the Netherlands, Pop Art and Roy Lichtenstein’s screenprints, Orphism with Robert and Sonia Delaunay being just a few topics. 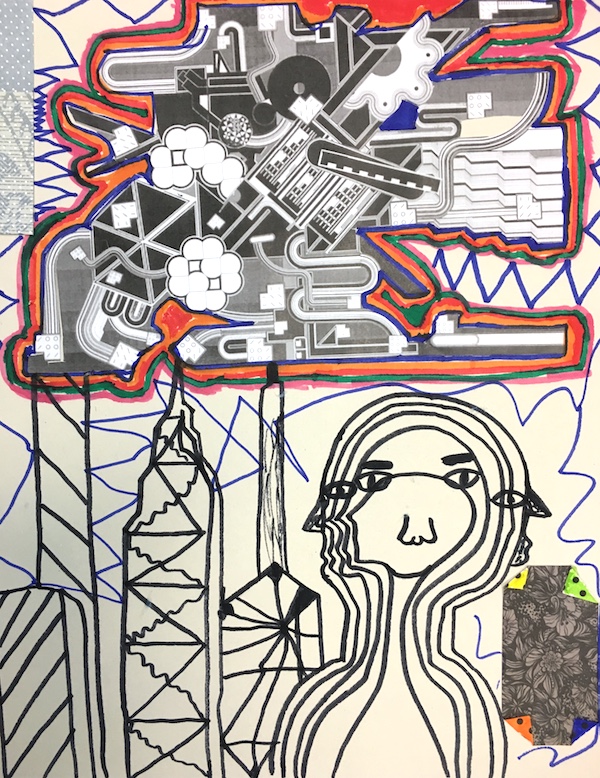 The project is a rare opportunity for the pupils to have fun and learn under the tuition of a successful contemporary artist.

Pieces have been selected for prizes including in the “We ❤ colour” art competition (Birmingham Museum of Art) and the quality that I have seen produced in the class is so intense, so lively, so vivid and so expressive that it seems to me that Buskova could encourage a visual art revival in primary school education. The learning that is taking place during the classes in the development of ideas and culture is incredibly valuable beyond the field of art, and those children who do not end up focusing on arts and crafts will have knowledge that can apply to different areas of the curriculum.

But more importantly, this is education with imagination at its heart. Art is leading the way in allowing children to explore the world, history and the pictures in their own mind. This is true development. Young heads can vigorously push into new territories, develop the right kind of pioneering spirit, the pioneer that is not afraid to investigate internal territory and create maps and diagrams and visions of that space, emotion and character.

I urge people to be inspired by this project. Let us have more artists in residence in primary schools and in other institutions. Let us put more effort and materials and space at the disposal of those who run art workshops and let us, above all, be ambitious for the children, let’s believe in them and what they can do. Let us not patronise them but understand that they already have a vast amount of talent and energy which can be used to make outstanding work right now, instead of looking too far forward into their lives before believing that their creations are of value.

I love the suggestion that the children’s work should be displayed in museums as a temporary exhibit next to the work that has inspired them. It would be fascinating but would also give such a huge boost of confidence to the young artist. And it would show their family, friends and circle that we in the professional adult art world consider their output to be already immensely worthwhile.

I am blown away by what the children have done in this art club with Buskova. I hope that her influence will spread. Birmingham is lucky to have this critical, community-centred art-educator and artist and I hope that they will take her lead and go further. I call for a Chad Vale Art Movement, a new generation of children’s art, nurtured by Buskova. With the current climate of fear and austerity, division and anxiety, it needs to start immediately.