Art Brussels sprouts back to life after two years missed for Covid, from 28 April – 1 May. It’s not a Fair that the usual international blue-chip galleries attend, but it does attract high-quality galleries – 157 this year – with a good mix of the well-established and the recently formed. There are few special projects to distract from that focus: the best is a handy ‘taster’ show made up of work from current Venice Biennale participants; the highest-profile is Jeppe Hein’s creation of a bar, having been given carte blanche by Maison Ruinart. He takes the piss enjoyably enough with an installation of undistinguished abstract paintings using a champagne bubble motif. There is a sprinkling of UK-based galleries and artists – I ran into Nika Neelova, Peter Peri and Bouke de Vries, all in attendance with excellent work. But the majority of galleries are from the continent. Belgium itself has many galleries and an active collector base. All in all, it wasn’t hard to find things to like, much of it presented to good effect through the healthy proportion of solo displays. 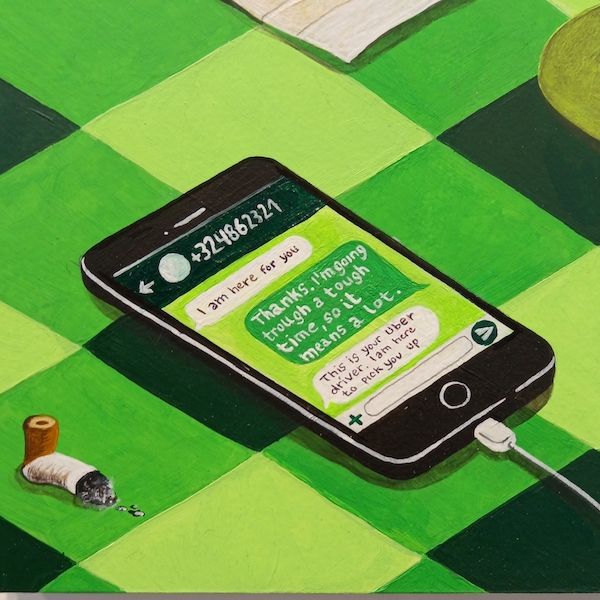 Young Gent-born painter Joëlle Dubois was a rapid seller with witty explorations of the effects of social media, summarised by her as the matter of being ‘never really there, but always THERE’. This acrylic on wood painting of a desktop incorporates a tablecloth that sets the palette beautifully, a cheeky view in a convincingly glassy mirror, and a phone conversation making a dark joke out of despair and communication failure. 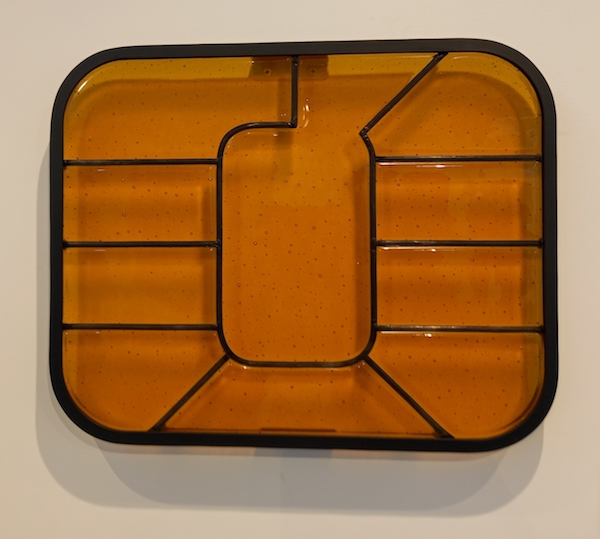 This small window, made in attractively bubbled Murano glass, came from the French artist noticing ‘the similarities between the black lines over the electronic chips on bank cards and the lengths of lead used in stained glass’. In churches, he observes, they ‘transform physical light into divine light’, whereas in a gallery or fair ‘the religious value associated with the stained glass (and with the work of art) gives way to its exhibition value’. Out with the credit card? 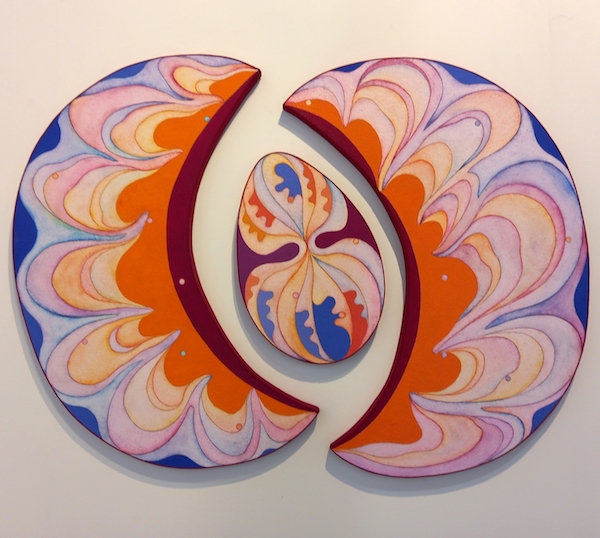 London-based Italian Bea Bonafini has often worked with carpet. Now she’s found a way to achieve a comparable aesthetic by painting in gouache and watercolour on engraved cork. The title of her solo presentation, ‘Where the primitive one becomes two’, cites Georges Bataille’s description of asexual reproduction: ‘We cannot say that a first entity has given birth to a second…The two new entities are, to the same degree, the product of the first…’ Just so, animal and human forms appear to melt into and out of each other in a group of works of which the gallery says the viewer is confronted by ‘evanescent silhouettes that recall the primordial while gently situating the observer in a surreal atmosphere’. 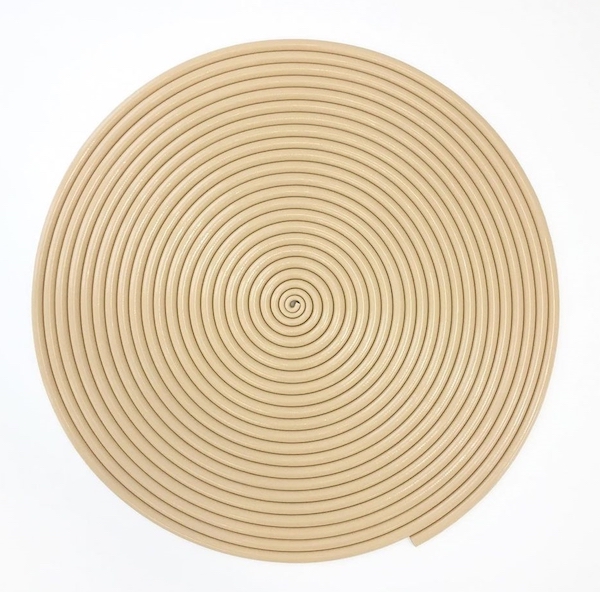 Belgian artist Leo Vranken’s solo booth is full of surprising ways of reusing everyday items to occupy the space between painting and sculpture. This hotplate-come-spiral is actually made from a garden hose. He told me it had been quite a hunt to track down one that could be manipulated as he wished, and then it was available only in 500m lengths, so he made a series. At first I thought the hose, even more unusually, got smaller at one end, but he explained that he’d achieved that simply by varying the pressure he applied, making it an impressively assisted readymade. 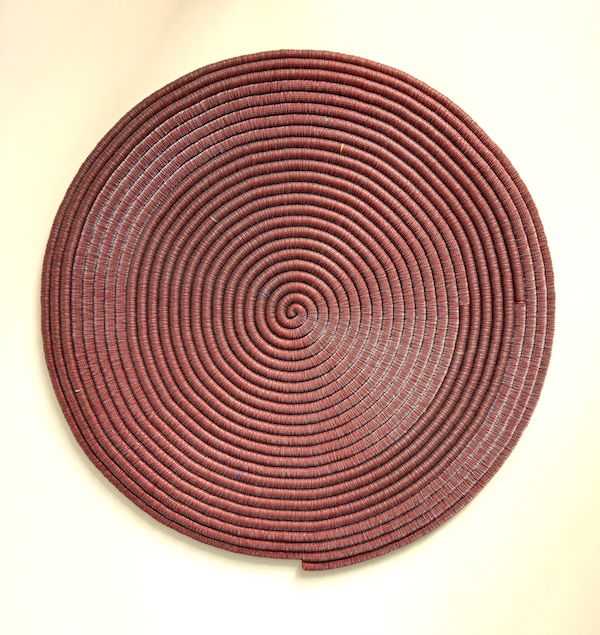 The white South African artist, who lives between Johannesburg and Cape Town, echoed Vranken visually with very different materials: discarded beer bottle caps threaded onto electric fencing cable, as used to control animals on farms. That’s typical of Soal in combining the industrial with the discarded to prod at notions of value and indicate environmental concerns, in this case with an inbuilt homage to El Anatsui’s famed use of bottle caps. 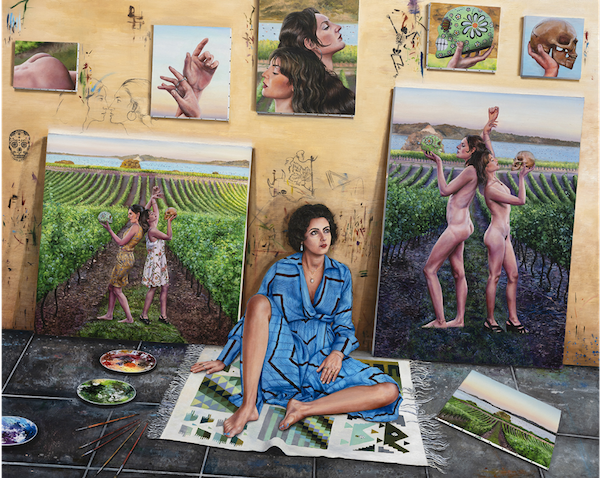 My choices may give the impression there was little fully figurative painting, but as in all fairs, there was plenty. Paris-based Iranian Nazanin Pouyandeh’s 1.6m-wide self-portrait effectively provides several paintings in one, along with her preparatory drawings. She’s shown with the results of a recent residency on Corsica, where the lagoon of L’Étang de Diane provides the backdrop to metaphysical engagements with a sense of classical-meets-modern. 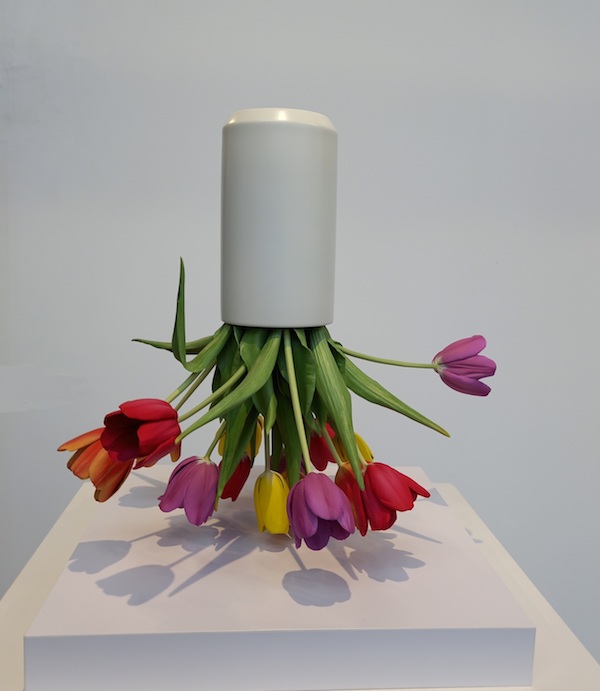 The best-known strands of American sculptor Tony Matelli’s practice see him introduce hyper-realistic weeds into surprising places in a celebration of unwantedness; or combine the timelessness of classical statuary with the temporality of fruit… but all in bronze. The fair had both, but this cheerful bronze falls somewhere between the two. I like the up-thrusting ‘growth’ of the drooping leaf and, after all, real tulips have such a brief vase life… 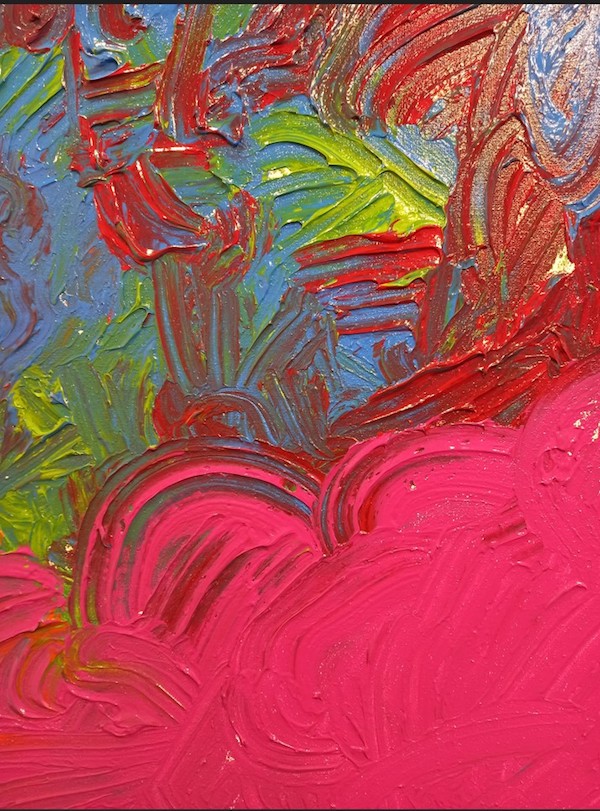 RX are showing the last four paintings made by the late Viennese (1938-2022): action paintings for sure, but some way from the monochrome suggestions of blood ritual for which he is best known. These two metre high canvases were painted by hand-smearing thick paint paste in a tenderly luminous and floral palette, more redolent of Monet than murder. Nitsch spoke of finding ‘a sense of joy’ in his late works, and of resurrection being a ‘principle’ for him. 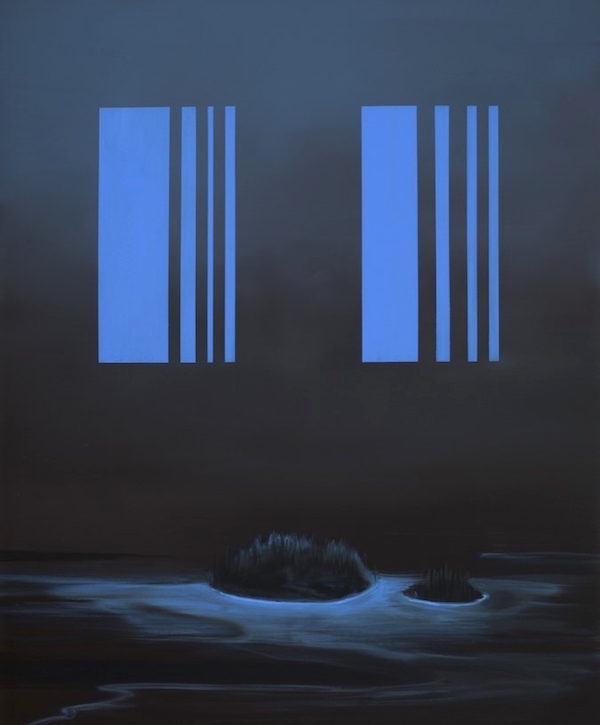 The Canadian painter has various paradoxically poetic ways of incorporating the human and technological into alluring yet poisoned landscape paintings. This is from an ongoing series in which the bar code motif suggests the commodification of nature as well as an abstracted face overseeing the land. There was a prize for the best solo stand, which Koop would have one had I been judging… 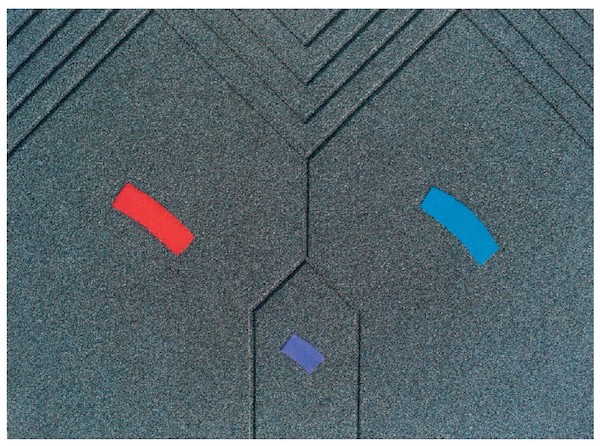 Another face emerges from one of the more unusual materials on view: this is from Anna Kutera’s series of semi-abstracted depictions of architectural components, created with poppy seeds applied on top of oil paint. The Polish artist, best known for her feminist works, is playing on the traditional Central European use of poppy seeds both medically and in baking for family and religious holidays, giving them strong connotations of homeliness, comfort, nutrition and well-being. 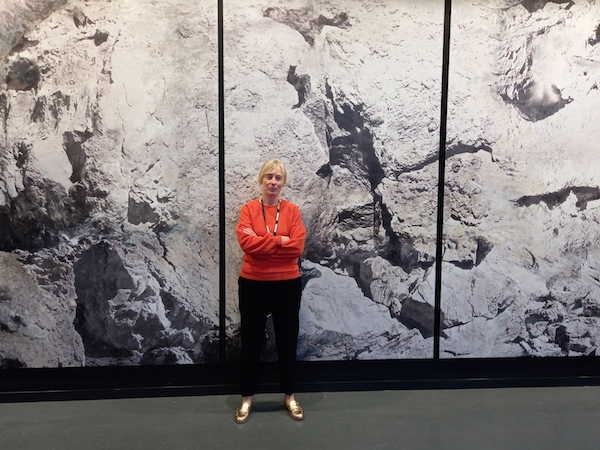 I met Belgian artist Marie Cloquet a month ago in Cork Street, where she covered all sides of a room with an immersive site-specific installation of black and white photographs, subtly overpainted to blur their categorisation: they were volcanic, and the immersive result was a somewhat claustrophobic transposition of geology into gallery. Evidently Cloquet is productive: here she was with another designed-to-fit installation straddling land art, photography and painting to a more cliff-like effect in one continuous thirteen-part presentation. 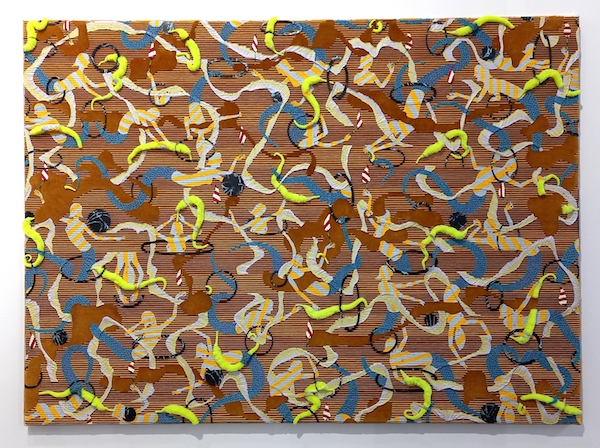 Ryo Kinoshita: ‘We Don’t Care About Any Restrictions’, 2022 at Galerie Fons Welters, Amsterdam – D04 (above and bottom)

The Dusseldorf-based Japanese artist’s works look like decorative abstract paintings from a distance, but their intricate rhythms prove both playfully figuratively and multi-media from up close, their surfaces enlivened by the incorporation of various fabrics and objects. Kinoshita says ‘he keeps on adding or subtracting oil and material, and then eventually I get the bigger picture- which tends to be playful as well as tactile.