THEM is a new exhibition examining the work of an important group of artists who came to prominence in the early 1970s, including Duggie Fields, Andrew Logan and Derek Jarman. Curated by James Birch, the show’s title derives from an article of the same name written by the cultural historian Peter York for Harpers & Queen that appeared in October 1976.

This exhibition, which brings together more than twenty works dating from the late 1960s to the 1980s

With great acuity, it sought to unravel an aesthetic sensibility apparent in young Londoners of the time. To be ‘Them’, York wrote, was to be part of ‘a mysterious aesthetic conspiracy’ prepared to sacrifice almost anything to ‘look interesting rather than sexy’. This ‘look’ was a highly adapted form of camp and came at a time when, according to York, ‘marketing all sorts of things sold to non-queer people.’

York cited many things that weren’t Them, but also those who personified it. These included the singer and songwriter Bryan Ferry and the fashion designer Zandra Rhodes. At the same time, the David Bowie exemplified them in the film The Man Who Fell to Earth (1976), which he considered a Them movie and Andrew Logan’s Alternative Miss World contest as the ultimate Them event.

The date of its publication is significant, because one month later on 26 November, The Sex Pistols released Anarchy in the U.K., an event that effectively swept away the concept of Them.

This exhibition, which brings together more than twenty works dating from the late 1960s to the 1980s, including paintings, sculptures and collage, examines the aesthetics behind the concept of THEM through the prism of art. While some of the ve featured artists were named in York’s article— Andrew Logan and Duggie Fields are labelled as ‘The Gang’ —this was not a movement in any sense, but a sensibility around which they all loosely confederated. 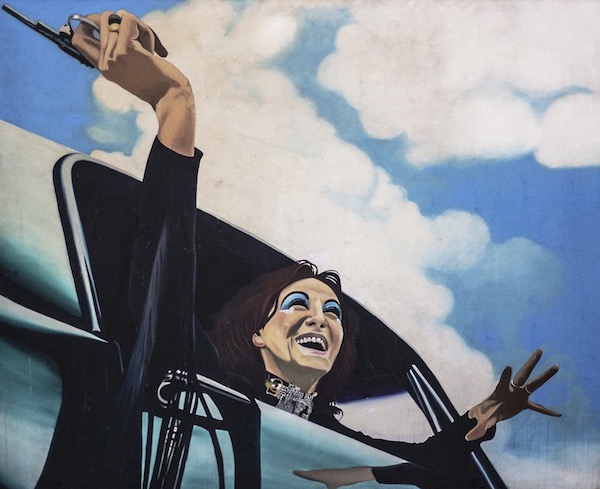 It is perhaps in Kevin Whitney’s Chelita Secunda (1969/70), a monumental portrait of the late journalist and fashion stylist Chelita Secunda, that this spirit is most evident. The work, rendered in oil, depicts Secunda spilling out of the window of a sports car, her arms ailing as she clasps a small revolver. Dangerous and carefree, the smudge of glitter under her eyes alludes, perhaps, to her role kickstarting the glam rock revolution of the early 1970s. Created a year after he graduated from Chelsea School of Art, Duggie Fields’ Fireside Cookies (1969) presents two young women in swimming suits sprawled on a rug in kitsch, domestic setting. Quotidian items surround the subjects — clothing lies scattered across the floor alongside half-read books and burning cigarettes, while beside the glowing fire sits a coal bucket and household plant. Combining elements from disparate vocabularies, Field’s painting is a masterclass in exuberant, post-Pop figuration.

In contrast, Derek Jarman’s The Kingdom over the Sea (1987), strikes a darker note. One of his celebrated Black Paintings, it was created shortly after he was diagnosed with AIDS in 1986 and acts as an autobiographical visualisation of his psychological mindset at that time. Embedded into tar are various found objects such as a candle and smashed glass in which words have been violently scratched, acting as a metaphor for Jarman’s reaction to his diagnosis.

The late Luciana Martinez de la Rosa’s epic painting Pru Pru (1981) offers a homage to Manet’s Olympia. However, here the reclining nude female figure is accompanied not by a servant but the artist herself attired in a kimono-like garment, a nod to the influence of Japanese prints in the original work. One of the so-called ‘Blitz Kids’, the band of fashionable club-goers that dominated the cultural dialogue in the early eighties, this work embodies that spirit of assimilation and artful contrivance. Also in influenced by 16th-century Florentine court portraitist Bronz- ino, de la Rosa ́s canvases are anything but dif dent; her vivid palettes include magenta, tangerine and sheets of gold leaf; boldly modelled, her women are powerful, con dent and mostly nude. 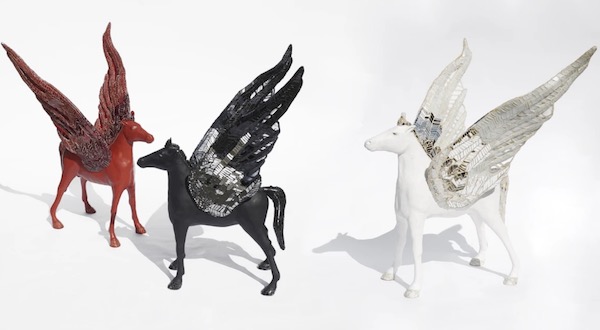 Andrew Logan is represented by his iconic Pegasus sculptures, Life Birth and Death (c.1980s). Constructed from fibreglass, glass, resin and glitter, they link back to the artist’s childhood obsession with Greek and Roman myth; his imagination was red by the tale of the winged white horse that sprang from the severed neck of the Gorgon, slain by hero Perseus. His very first Pegasus in 1980 was built in six weeks and presented at the London premiere of the Alternative Miss World lm then paraded through Chelsea, Knightsbridge and Fulham. At least one new Pegasus has been created in each decade since. In white, red and black, these three Pegasus symbolise three different aspects of existence – life, birth and death – which is interchangeable according to the viewer’s perspective.
Says James Birch: ‘It is more than forty years since Peter York wrote about Them. It was a time — perhaps the last time — before culture became commodified. And while its time in the spotlight was meeting, it has endured and the art created by the featured artists remains as fresh and exciting, almost timeless, and is still invested with the power to provoke and disorientate, amaze and excite.’

Duggie Fields (b. 1945, Tidworth, U.K.) lives and works in London, UK. He graduated in 1968 from Chelsea School of Art, London and at the end of that year moved into the Earls Court apartment and studio that he lives in today. As a student, his work moved from Minimal, Conceptual and Constructivist phases before arriving at a more hard-edge post-Pop figuration. By the middle of the 1970s, his work included many elements that were later de ned as Post-Modernism. In 1983, the Shiseido Corporation in Tokyo created a gallery specifically for his show, and Fields and his work were featured in a simultaneous national television, magazine, billboard and subway advertising campaign. He started working with digital media in the late 1990s describing his work in progress as Maximalist. Selected solo exhibitions include: Duggie Fields – Welcome to my World, The Gallery Liverpool, Liverpool (2012); Random Retrospective, Virtual Gallery, DuggieFields.com (2000); Shiseido Exhibition, Tokyo (1983); Spacex Gallery, Exeter (1982); and lkon Gallery, Birmingham (1980). Selected group exhibitions and lm festivals include Pink Floyd: Their Mortal Remains, V&A Museum, London (2017); THE GAP BETWEEN THE FRIDGE AND THE COOKER, The Modern Institute, Aird’s Lane, Glasgow (2017); Flare Film Festival, British Film Institute, London (2016); Dover Street Market, London (2008); Zulurama 2, ICA Gallery, London (2004); Britart, Selfridges, London (2003); Digital Interface, Leicester Square, London (2002); Rapture, The Barbican, London (2002); Venice Short Film Festival (2000); Fashion and Surrealism, Victoria and Albert Museum, London (1989); The Embellishment of the Statue of Liberty, Cooper Hewitt Museum/Barney’s New York (1986); and London International Film Festival (1982). 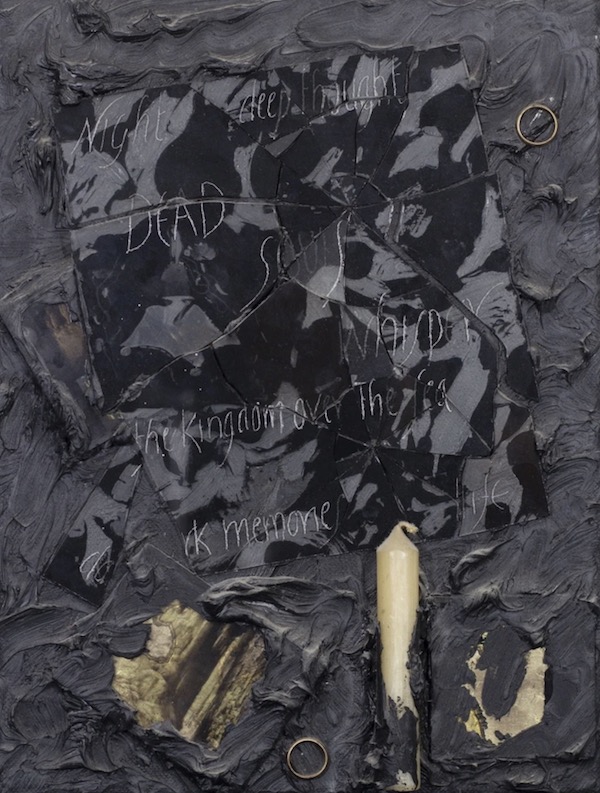 Derek Jarman  The Kingdom over the Sea, 1987

Andrew Logan (b. 1945, Witney, UK) is an English sculptor, performance artist, jewellery maker, and portraitist. He was educated as an architect at the Oxford School of Architecture, graduating in 1970. One of Britain’s principal sculptural artists, he challenges convention, mixes media and plays with our artistic values and has worked across the fields of sculpture, stage design, drama, opera, parades, festivals and interior design. He is also the founder of the Alternative Miss World, an annual pansexual beauty pageant.

Luciana Martínez de la Rosa (1984 –1995) was best known for her work on Derek Jarman’s Jubilee (1978), In the Shadow of the Sun (1981) and Sebastiane (1976). At age 16, she moved from L.A. to Greenwich Village, NYC and found her permanent passion in portraiture. Most often she painted friends from her highly varied international circle including Arch Duchess Francesca von Habsburg, British fashion designer Jasper Con- ran, director Nicolas Roeg and his actress wife, Theresa Russell, and downtown club phenomenon Suzanne Bartsch.

In 1982 the British Olympic Association appointed Kevin Whitney as the first-ever Official Olympic Artist. The artist’s own initiative, it combined his lifelong passion for Greek art with his fascination with the Olympic movement. Whitney has been promoting Olympic art to students since 1982 and has toured schools around the country since 2004. He also created two Paralympic mosaic murals involving autistic students for Suffolk County Council’s 2012 team. Whitney’s work is in public and private collections all over the world, including the International Olympic Museum in Lausanne and the British Olympic and Paralympic Associations. His work is also held in private collections including those of Prince Ernst of Hanover and David Bowie.

Curator James Birch was born in London and educated at the University of Aix-en-Provence, where he studied Art History, before training in the Old Master department of Christie’s Fine Art in London where he later established the 1950s Rock & Roll department. In 1983 he opened his first gallery, James Birch Fine Art, on the King’s Road, London, where he specialised in the work of British surrealists such as John Banting, Eileen Agar and Conroy Maddox.
In 1984 Birch gave the Turner Prize winner Grayson Perry his first show, with a second quickly following in 1985. He then concentrated on exhibiting Francis Bacon in Moscow in 1988, and Gilbert & George in Mos- cow in 1990 and Beijing in 1993. In 1997 Birch returned to exhibiting in London when he opened the A22 Gallery in Clerkenwell, where he showed Keith Coventry, Dick Jewell, Genesis P-Orridge and two exhibitions by members of The Colony Room. Birch regularly lends artworks to art institutions and galleries for major and small-scale exhibitions.