Turner Contemporary 0pens two exhibitions tomorrow which feature Margate’s own Tracey Emin in one section and the work of the Swiss-born artist Jean Hans Arp in another.

The Poetry of Forms is the first exhibition of Jean Arp’s work in the UK since 1966. As well as over 70 loans of work – the majority of which have not been on display previously in the UK – the exhibition will include publications of Arp’s poetry and writings, showcasing the intersection between Arp’s poetic and visual art practice.

Arp: The Poetry of Forms marks an extraordinary opportunity to explore the works of Jean Arp (1886-1966), one of the most versatile abstract artists of the 20th century, in a new context, at Turner Contemporary.

A pioneer in his use of chance in the creation of his work, he was also a poet, moving freely between media, materials and languages throughout his career. His playful collages, paintings and sculptures were rooted in nature, suggesting plants, animals, the human body and other organic forms.

Rather than copying the natural world, Arp sought to create a new visual language that was itself part of nature. Interested in ideas of transformation and growth, his biomorphic sculptures in plaster, stone and bronze suggest nature in of states of flux and change.

Arp influenced many artistic developments of the 20th century from abstraction and surrealism, to constructivism. He was a key member of groups including Der Blaue Reiter, Dada, and Abstraction-Création and embraced collaboration as part of his practice, in particular with his longtime artistic partner and wife, Sophie Taeuber.

Arp: The Poetry of Forms is the first exhibition of Jean Arp’s work in the UK since his death in 1966 and organised in collaboration with the Kröller-Müller Museum in The Netherlands.

The exhibition is curated by Frances Guy, an independent curator, working with Eric Robertson, Professor of Modern French Literary and Visual Culture at Royal Holloway, University of London 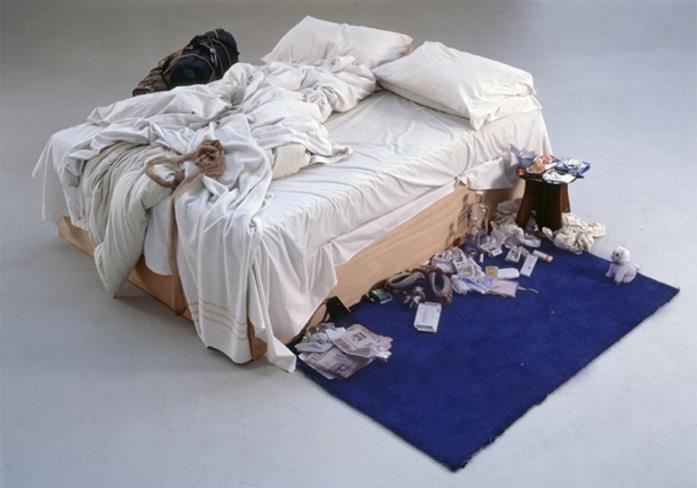 On the other hand, Tracey Emin returns to Turner Contemporary with an exhibition pairing My Bed with a collection of works by JMW Turner. Tracey Emin, My Bed/ JMW Turner, runs 13 October 2017 – 14 January 2018.

Emin’s exhibition pairs her controversial installation My Bed with a collection of JMW Turner’s seascapes and stormy skies, chosen by the artist and loaned from Tate’s collection. My Bed famously features Emin’s bed and gives a snapshot of her life after a traumatic relationship breakdown. It offers an unconventional and uncompromising self-portrait through objects, in which the artist herself is absent.

The artist’s unmade bed —surrounded by used condoms, stained underwear, cigarette butts and empty vodka bottles — marked a moment of epiphany in Emin’s life. After spending over a week in bed drifting in and out of consciousness in an alcoholic haze, she reached a realisation. ‘I just suddenly thought, “This is horrific.” And then it all turned around for me. It stopped being horrific and started being beautiful. Because I hadn’t died, had I?’1

Originally made in Emin’s Waterloo council flat in 1998 and included in her Turner Prize exhibition in 1999, the bed is on long-term loan to Tate following its purchase by a private collector in 2014. The readymade installation epitomises Emin’s confessional, candid art in which nothing is taboo, and represents a pivotal point in British art in which contemporary artworks achieved mainstream fame. Its influence, both on art and wider culture, has been profound. For the author Jeanette Winterson, “By refusing to disentangle art and life, by fusing her autobiography with her artistry, Emin creates a world where personal truth-telling moves beyond the me-culture and into collective catharsis.”

On her return to her hometown Margate, Emin has said: “Out of all the places My Bed has been shown this is one of the most exciting and ambitious for me as I know the audience will be very discerning.” The installation will be shown alongside paintings by J.M.W. Turner, another famous ex-resident of Margate who returned regularly to the seaside town for its unique quality of light and skies, which he considered “the loveliest in all of Europe.”

Margate is the third location that My Bed has toured to. Previously, it has also been shown alongside eminent painters, selected by Emin. In 2015 at Tate Britain – where it was originally shown as part of the Turner Prize exhibition in 1999 – My Bed was shown alongside Francis Bacon. Emin highlighted his chaotic life, his notoriety as a maverick within society and the movement within his paintings which display big, undulating roles of flesh as the reason for her choice. At Tate Liverpool, My Bed is paired with works by William Blake. The display affirms Blake’s Romantic idea of artistic truth through existential pain and the possibility of spiritual rebirth through art, shared in Emin’s work.

Victoria Pomery, Director of Turner Contemporary, says: “We’re eagerly awaiting My Bed and the responses it will spark. The work, now almost 20 years old, was shown by Tracey Emin for her nomination for the Turner Prize exhibition in 1999. Ahead of the Turner Prize coming to Turner Contemporary in 2019, there couldn’t be a more pertinent moment to display this work.”