“Every religion has Nuns and Monks,” Ugo Rondinone remarks as we finish up bowls of miso soup. We are in my Noho loft, enjoying an early Sunday supper. Getting back to Ugo’s upcoming show “Nuns & Monks” opening at the Gladstone Gallery in Chelsea, and his current show spread over two of Sadie Coles HQ in London, I ask him about the materials. “Stones have been a presence and recurring material and symbolism in my art.” These sixteen-foot cloaked figures join the artists’ tribe of extraordinary stone sculptures “Human Nature” that graced Rockefeller Center in 2013 and the elemental eight-foot moon rise masks of 2005-2006.

Conceived in limestone, the larger than life, gender fluid figures were then digitally “three dimensionalised” and cast in bronze. I ask Ugo if his Catholic childhood inspired the robed and majestic figures. “It’s not specifically religious. “nuns & monks” will continue to address the inner self and the natural world. This is the same principle as the simultaneous shows I did in 2020 with Galleria Eva Presenhuber in Zurich, Esther Schipper in Berlin and Saint’Andrea de Scaphis, Rome.” 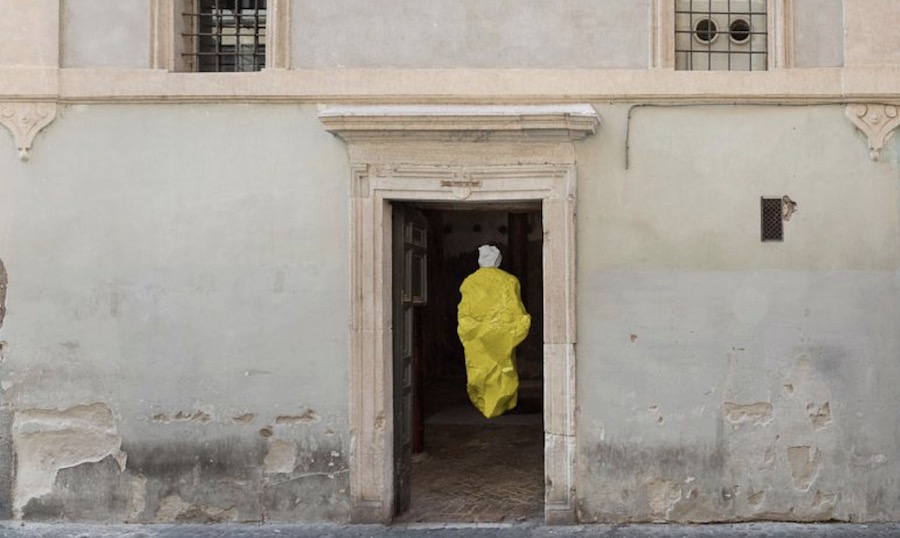 “Along with the three chromatically contrasting figures (of Nuns & Monks) are two bronze windows titled after works by the German Romanticist Caspar David Friedrich, a nineteenth-century artist who made 83 known paintings in his lifetime. In 2014 I started collecting 19th-century windows. These windows were made at the same time as Caspar David Friedrich made his paintings. The idea is to make as many window casts as there are paintings.”

“I cast these old windows either in aluminium for a day painting or now at Gladstone in black bronze for the night paintings.”

Since the 1990s, windows have been a recurring symbol in Rondinone’s work, and these weathered antique windows will be part of 160 cast windows, all of which will be named after a specific Friedrich painting.

As New York and Chelsea continue to open up following this long Covid winter, Rondinone’s “Nuns & Monks” creates a restorative spiritual moment. Consistently inspired by the natural world, the Italian Swiss-born artist creates sculptures, drawings, paintings, photographs and videos that celebrate the living universe; “this season, this day, this hour, this sound in the grass, this crashing wave, this sunset, this end of the day, this silence.”

“How I would have loved to have been in London for the magnificent Sadie Coles show, “A Sky. A Sea. Distant Mountains. Horses. Spring.” The title reminds me of the enigmatic pencil on canvas poems Ugo worked on this fall when I visited his Mattituck, Long Island studio. Gazing at the installation of fifteen, colt sized azure horses grazing in the gallery, Ugo explains to me, “All show a seascape within their bodies, named after a sea. The top is the sky, the bottom the sea. They are full-bodied – solid, and then I cut them. Do you see what happens? You see the horizon. That’s the sea and this is the sky. When the light hits the lower part, you see a horizon.” Curator Mark Godfrey has said that this is a “ravishing show – the split through the cast glass horses rhyming with the horizon painting.”

“It was glass cast. It took four months. I made the work in clay; then you make a negative. You can see all my fingerprints. Then they were done in a glass factory in Shanghai. I did try twice in Murano, with two different Italians, and they couldn’t do it.”

“In the last room, with the horses, are these new paintings I have made. Those are watercolours of the sunset; I started them in Mattituck. The other gallery has the mountain paintings and upstairs are the small Mattituck paintings.” The North Fork locale offers superb vistas of the Long Island sound, and Ugo divides time between his Suffolk County house overlooking the water and the reconverted Harlem church that is his spacious living and studio space.

When I comment on Ugo’s extreme productivity, he replies, “These are all things I had planned. “Nuns & Monks” took two years. The horses took three years until I could get them done.”

Even with the pandemic, Ugo plans on being in Europe and Morocco following his New York opening. Trying to pin him down, he remains pragmatically elusive, “First, I will be in Paris where I am working on a movie. I have many, many projects now and you can’t cover everything.” And when I express my regret at not seeing the Sadie Coles show live, Ugo agrees. “Of course, I would have loved to go to that opening.”