Last Sunday, the Times carried not one but two pieces by Waldemar Januszczak, its resident art critic, who is certainly one of the best in that slightly esoteric line of business. One was in the Culture Supp – the place where Sunday Times art reviews usually appear. The other was buried deep in the main paper. Between them, they neatly illustrated some of the main difficulties that criticism of contemporary art is now facing. 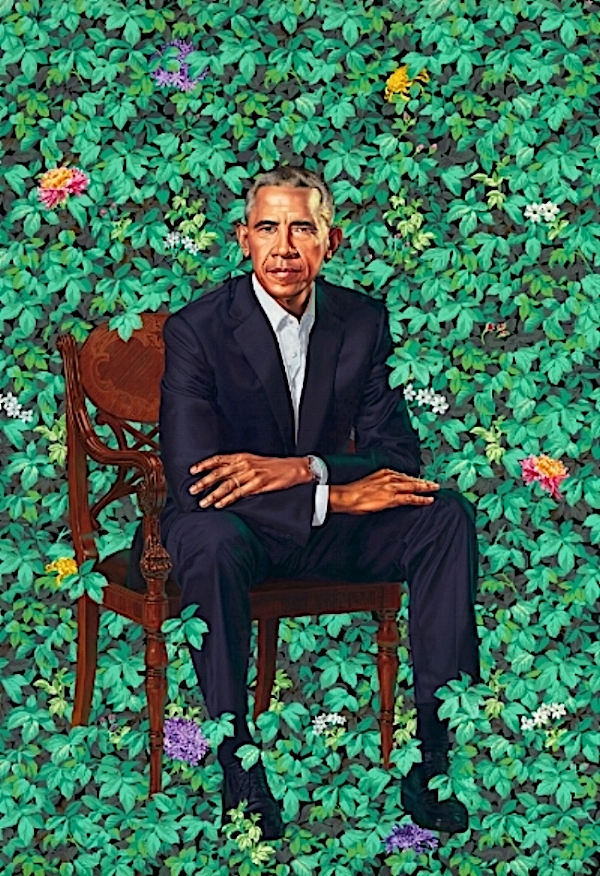 The piece in the supplement headlined ‘Straight outta South Central’ was not a review but a puff for a show that hasn’t happened as yet – the exhibition of landscapes by the Black American artist Kehinde Wiley, which is due to open at the National Gallery later this year. Wiley is best known for his striking portrait of Obama; an official commission produced just as Obama was leaving office – as Waldy tells the reader: “It was the first official presidential portrait by a black artist, and the first that was fun to look at.” The fun part is that, while the subject is shown sitting in an elegant period armchair, this seems to b placed in the very middle of a hedge. Apart from this, the painting is conventionally realist, though also very skilful. It has absolutely nothing to do with what we usually think of as pioneering Black art. Waldy’s piece tells one that, in the National Gallery’s upcoming show: “A new body of work will look at the romantic landscape tradition of artists such as Turner, Friedrich and Vernet, and will seek to infuse the genre with a contemporary black urgency.” One looks at that sentence, remembers the conventional Obama portrait, and thinks: “For God’s sake, how? Can any artist be more urgent than Turner at his wildest?” Waldy himself seems confused: “All I can imagine at this moment is haunting black figures standing on mountaintops enveloped in dense romantic mists.”

Essentially what one seems to have here is a very competent but fairly conservative Black artist working within the boundaries of the European Romantic tradition. No amount of wishing and hoping is going to make it otherwise.

When one turns to Waldy’s piece in the main paper, the situation is different. The headline is “Better a Gormley ‘sex toy’ sculpture than a B-list tribute to Mills & Boon”. He is defending a new Gormley work on the beach at Aldeburgh against people who think that public sculpture should be ploddingly realistic and who like sculptures of the sort made by artists whom he – a well-established figure in the contemporary art world – has never heard of. The message is quite a familiar one: “We’re the experts – you’ve got to like what we tell you to like.” Well, hard luck guys. The mass public won’t take lessons from you. Gormley is very much an established and establishment figure. A ‘Sir’. A member of the RA. Reputation made long ago by his Angel of the North. However, this piece doesn’t have anything like the same impact as the Angel. From the illustration offered in the ST it does indeed look like a bunch of giant sex-toys, half-buried in sand, to which some of the locals in Aldeburgh have compared it.

Waldy sniffs: “I don’t know enough about sex toys to be able to comment fairly upon the parallels being drawn by the inhabitants of Aldeburgh. What I do know is that having a Gormley on the beach ought to be a source of pride and accomplishment.” In other words: “Oh, you ungrateful, ignorant kiddies, the cultural establishment brought you a gift and you have rejected it. Nanny ought to spank you.”

I’m afraid these two pieces of journalism seem to me to sum up a good deal of what is wrong with the British contemporary art world today. “Do as you’re told. Admire what we tell you to admire. Kowtow nicely, but only to idols that we, the establishment, currently approve of.” I suppose it was ever thus.