Vincent van Gogh arrived in Britain as a young trainee art dealer who then had a spell as a teacher before leaving Britain to pursue a life of religious service. When these hopes too failed his brother, Theo suggested he take up art and the art historical narrative has commonly been that he happily abandoned his religious beliefs when he left the Christian ministry to pursue a career as an artist.

Van Gogh’s continued belief in an afterlife informed the symbolism of his later works, such as Starry Night – JE

The EY Exhibition: Van Gogh and Britain argue that Van Gogh’s love of London was such that he was inspired by British art, literature and culture throughout his career. Although, within the texts surrounding the exhibition, there is the contention that Britain set Van Gogh on a religious career there is less of sense that the religious convictions nurtured in Van Gogh through his time in Britain may have inspired his art. 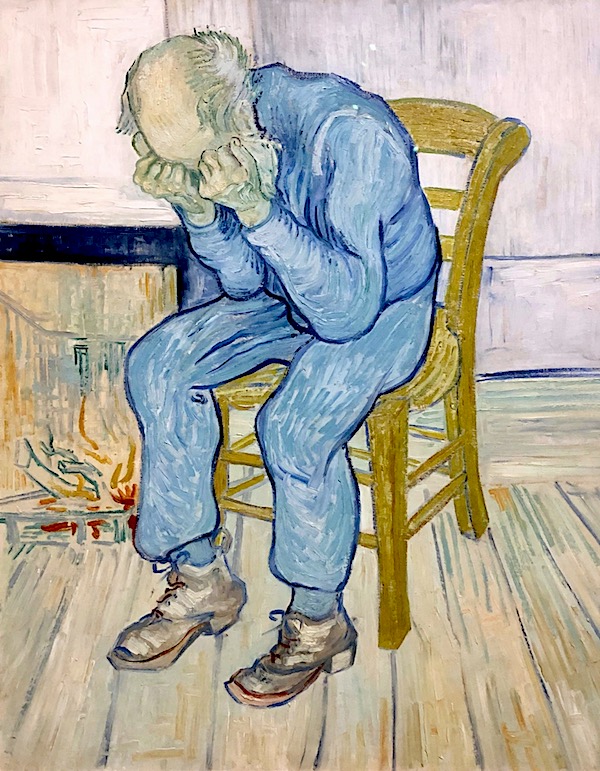 Van Gogh’s religious journey around London was pieced together for the first time by Martin Bailey, who curated the exhibition Van Gogh in England: Portrait of the Artist as a Young Man at the Barbican Art Gallery in 1992. ‘While living in Kennington Road, Van Gogh attended Baptist services and walked to Spurgeon’s Tabernacle at the Elephant and Castle.’ He preached his first sermon at the Wesleyan Methodist church in Isleworth and also taught Sunday school and preached at Rev Thomas Slade-Jones’s church in Turnham Green.

At this time Van Gogh moved easily between at least six denominations in London explaining that: ‘In every church I see God, and it’s all the same to me whether a Protestant pastor or a Roman Catholic priest preaches. It is not really a matter of dogma, but of the spirit of the gospel …’ Among Van Gogh’s early artworks are sketches of Petersham Methodist Church, Turnham Green Congregational Chapel and the Dutch Church at Austin Friars in the City. 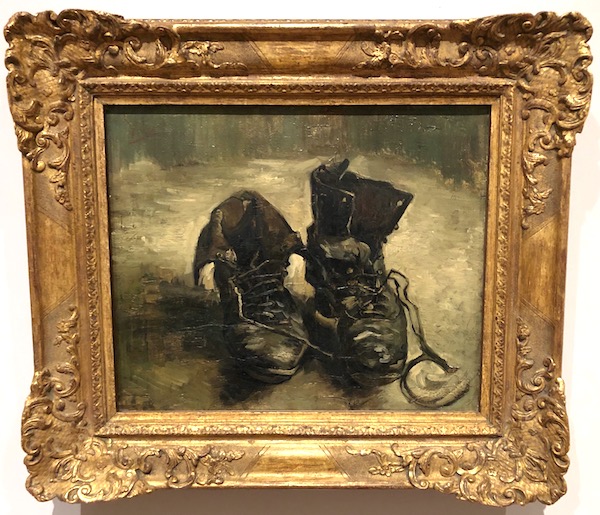 At Eternity’s Gate: The Spiritual Vision of Vincent van Gogh sees Kathleen Powers Erickson tracing Van Gogh’s pilgrimage of faith, from his early religious training, through his evangelical missionary period, to his struggle with religion and modern thought, and finally to the synthesis of traditional Christian beliefs with the modern world-view that Erickson contends he achieved in both his life and his art.

This synthesis extends from his first major work, The Potato Eaters, where he ‘attempted to suggest the divine presence symbolically … through his subtle allusion to the celebration of the Eucharist.’ His continuing preoccupation ‘with the symbols and subjects that first came to him through the parables and sayings of Jesus is apparent in his many renditions of sowers, reapers, and wheatfields.’ He explored new ways to represent the presence of Christ often ‘depicting him as a glowing light or a blazing sun’ and using the colour yellow to imply a divine presence. During his illness and confinement in St. Rémy it was ‘religion that often dictated his choice of subjects, such as the Pietà, the Good Samaritan, and the resurrected Lazarus.’ ‘Finally, Van Gogh’s continued belief in an afterlife informed the symbolism of his later works, such as Starry Night, Crows over the Wheatfield, and At Eternity’s Gate.’

The artist Makoto Fujimura sums this synthesis well: ‘Vincent heard in a contorted cypress tree the whispers of the Spirit: Vincent saw in a flight of crows in a Wheatfield a calligraphic trajectory toward his own mortality. And he saw in a family of poor potato farmers a sacred, warm light he never felt at home. His work embodied this kind of empathy, driven by his own limitations and brokenness. He, therefore, developed an empathetic language of hope, full of prismatic colours, that invites us to hope with him, and long for a renewed world.’

In the work of Van Gogh movement, of brush strokes, line, dots, and dashes indicate a sense of force that informs both the natural world and human beings. He wrote that he wanted ‘to paint men and women with that something of the eternal which the halo used to symbolise, and which we seek to convey by the actual radiance and vibration of our colouring.’ This introduces a new means by which the spiritual is to be encountered in modern art. Those aspects of emotion, spirit and soul that previously had been conveyed by symbol are now to be found primarily in colour and line.

Van Gogh continues in this letter to his brother Theo: ‘I am always in hope of making a discovery there [in the study of colour], to express the love of two lovers by the wedding of two complementary colours, the mingling and their opposition, the mysterious vibration of kindred tones. To express the thought of a brow by the radiance of a light tone against a sombre background. To express hope by some star, the eagerness of a soul by a sunset radiance. Certainly, there is no delusive realism in that, but isn’t it something that actually exists?’

Alan Bowness sums this up in Post-Impressionism when he writes that; ‘For Van Gogh deeper and more universal meanings emerged from his study of reality, by process of association. In his colour and brushwork, he harnessed the effects which he found in his subjects to expressive ends, using certain colour relationships and patterns of natural forms as metaphors for emotional and religious experience, as in the Night Café, whose red-green contrasts were meant to express the ‘terrible passions of humanity’, and in his canvasses of the asylum garden and olive orchards of Saint Rémy.’

Robert Rosenblum in Modern Painting and the Northern Romantic Tradition sees Van Gogh as being engaged in ‘a Romantic search for a new kind of religion in the scrutiny of nature’ and ‘perpetuating in his own art many metaphors of divinity that were first invented in the visionary landscapes of [Caspar David] Friedrich, [Philipp Otto] Runge, and [Samuel] Palmer.’

He notes, for instance: ‘Van Gogh’s recurrent image of the sun as something almost sacred, a connotation that can often become explicit. Even in a thoroughly secular scene like that painted in Arles in June 1888 of a sower in a wheat field, the sun, blazing on the horizon, has an almost supernatural power. Its location, in exact centre and just over a high horizon, is that which, in earlier art, one might have associated with a symbolic representation of an omnipotent deity; and its form and colour, a pure disc of golden yellow from whose clearly incised circular periphery radiate symmetrically ordered spokes of golden light, suggest that this is, in effect, the pantheist’s equivalent of a golden halo.’

Van Gogh wrote of needing something greater in his life, although he is clear that this is not God: ‘Oh, my dear brother, sometimes I know so well what I want. I can do very well without God both in my life and in my painting, but I cannot, ill as I am, do without something which is greater than I, which is my life – the power to create. And if, frustrated in the physical power, a man tries to create thoughts instead of children, he is still part of humanity.’

Such comments reveal a need for transcendence of or in ordinary life, even when standing outside of the framework of institutional Christian faith. So, Rosenblum writes that Van Gogh’s:… ‘complaint about Émile Bernard’s Christ in the Garden of Olives – that it would be better simply to paint real olive trees – is a clear avowal not only of Van Gogh’s personal dilemma but of that of so many artists who inherited the problems of those Northern Romantics who tried to create, consciously or unconsciously, a religious sentiment in things observed that would be far more truthful to their personal experience of the supernatural than the perpetuation of traditional Christian iconography.’

Although Van Gogh lost the evangelical faith of his youth, he nevertheless retained a deep love of Christ himself. To Émile Bernard he wrote: ‘But the consolation of that saddening Bible which arouses our despair and our indignation – which distresses us once and for all because we are outraged by its pettiness and contagious folly – the consolation which is contained in it, like a kernel in a hard shell, in a bitter pulp, is Christ … Christ alone – of all the philosophers, Magi, etc. – has affirmed, as a principal certainty, eternal life, the infinity of time, the nothingness of death, the necessity and the raison d’être of serenity and devotion. He lived serenely, as a greater artist than all artists, despising marble and clay as well as colour, working in living flesh. That is to say, this matchless artist, hardly to be conceived of by the obtuse instrument of our modern, nervous, stupefied brain, made neither statues nor pictures nor books, he loudly proclaimed that he made … living men, immortals.’

Here Van Gogh connects himself to Christ through the work of creation; he brings thoughts to birth while Christ brings ‘living men, immortals’ to birth. While Christ is so much greater – ‘a greater artist than all artists’ – all artists are, therefore, connected with him through the act of creation.