“What art can do for us is help us become more comfortable with the grey, the shady areas, the places where identity isn’t clear cut.” – Ralph Ruggoff

The overall event seems to get larger and larger with more countries exhibiting in off-site venues. The weather shifted from washout to sunny to heavy rain on the press day for the main event launch. This year the Golden Lion went to Lithuania who created a gigantic beach with an immersive live sound performance. The jury was taken with the transformation of the venue which presented a Brechtian style opera on a sunny manmade beach. The Pavilion also summed up the city and its inhabitants, highlighting the coastal environment of Venice. Sun & Sea (Marina) portrays people in a humanised everyday role battling shifting climate change.

The indoor beach came just in time for the downpour on Wednesday. As it was pouring with rain outside I actually got to see the piece performed inside, in the sun. It was located in one of the venues away from the main sites. Not an easy one to find. After a bomb scare on Sunday which closed the venue for several hours, other reports started circulating. On Monday the Biennial Commission threatened the organisers of the Lithuanian pavilion with full closure after curators, and the artists decided only to have the pavilion open on Saturdays due to lack of funds. They have also considered closing it completely. It has been reported that the organisers are late with paying the rent for the venue hire. The Lithuanian government needs to kick in and support their national pavilion, after all, they won the top award. 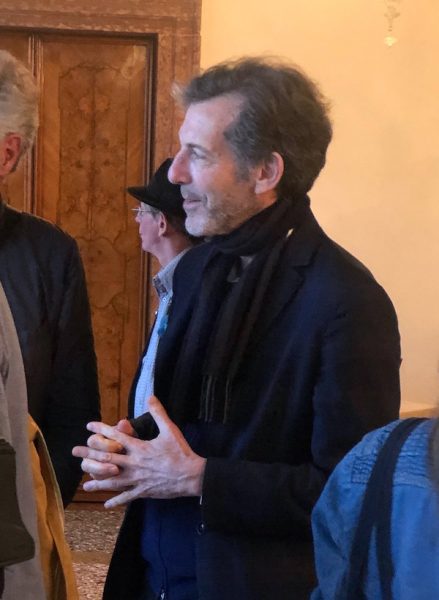 Ralph Ruggoff Artistic Director for the 58th Venice Biennale has successfully created “May You Live in Interesting Times,” the featured curated group exhibition. It is situated in both of the main locations. Ruggoff has used his unparalleled eye to fill the spaces with a mix of relevant works by diverse established artists like Arthur Jafa, the Golden Lion winner for the best participant in the main show. Jafa has created videos that utilise YouTube video clips, news broadcasts, and original footage which references American culture and race. Heavyweights, George Condo and Henry Taylor, both painters of considerable reputation and Video artist Christian Marclay added to the credibility of Mr Ruggoff’s selection. Emerging artists like Nabuqi of the Peoples Republic of China, Hito Steyerl (Germany) who presented This is the Future (2019) and Zhanna Kadyrova created garments sculpted in ceramic tiles. Rugoff has also put into drydock the controversial Barca Nostra (Our Boat). The vessel is one and the same where 1,000 migrants died in 2015 trying to escape from Libya to Italy.

The Venice Biennale is perhaps the most significant art event on the world stage today. It is the oldest and best established of its ilk. One would think that this would be enough to prompt countries to think outside of the arena both conceptually and visually and to devise means that use the spaces provided to their best advantage. This has not been the case this year. In many instances, space is hardly a consideration for many of the exhibitors.

The problem with the Venice Biennale lays with what the countries themselves deem exhibition worthy. This year’s president Paolo Baratta described the event as representing a “plurality of voices”. I found it ranged from earnest, preaching to funfair tattiness. I encountered several pavilions that were incomprehensible (see Romania). I struggled to understand what the curators and often the artists were trying to say, if anything at all. It could be that much was put through google translate and lost when it came out the other side. Or quite possibly I just reached the saturation point frustrated by curator-driven pavilions trying too hard to save the world in the name of art. 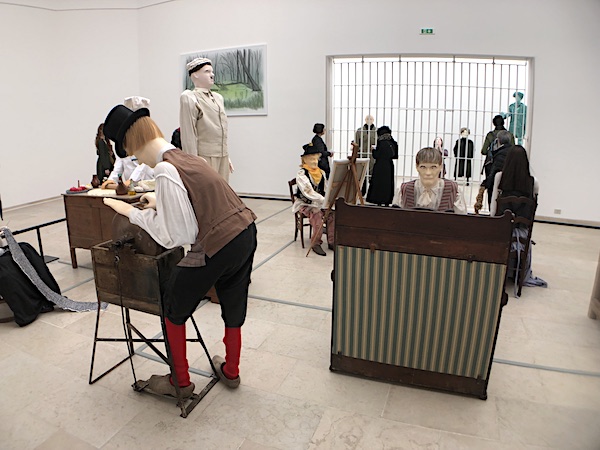 The Russian pavilion was based around automatons poorly presented and Belgium presented duo Jos de Gruyter and Harald Thys, who actually won an award for creating more automaton puppets…please!!! The dry and pointless was also highly visable like the Romanian pavilion who displayed a bed topped installation of Bosch washing machines and a black wishing pond full of coins. OKAY, this is the Romanian pavilion’s description of the washing machines… Belu Simion Fainaru ‘Belongs Nowhere and to Another Time’ The Pavilion is inspired by his own experiences of exile. It situates the visitor in the space of a non-specific transitional culture, problematising contemporary issues of displacement migration and nomadism from the perspective of cosmic temporality. Did you get it? I nearly passed out reading this… 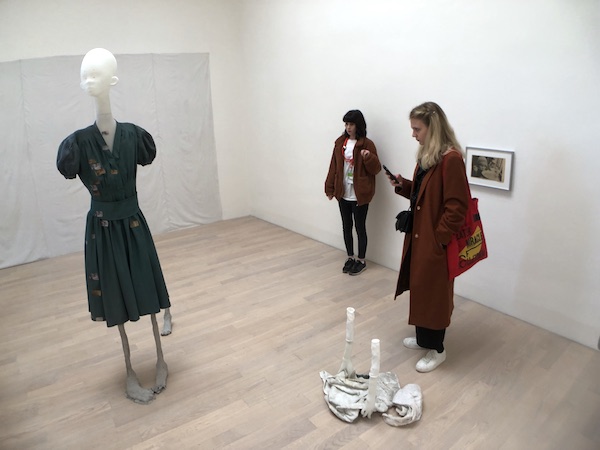 Great Britain’s Cathy Wilkes is a lesson on what not to do in a public space let alone a space representing your country on the global stage. Much of the intimate work on display is swallowed up by the grandness of the neo-classical structure. The work appears incongruous to the dimensions of the rooms and is overshadowed, creating an underwhelming pavilion. After Phyllida Barlow and Sarah Lucas, this is not a strong offering from the UK.

The United States entry is a good example of proper space stuffing ‘Liberty,’ Martin Puryear’s exhibition for the US Pavilion at the Venice Biennale leaves me high and dry unlike Richard Tuttle and Anish Kapoor who approach sculpture in a similar way but are better at it.

My other problem was with the overemphasis on video art at this year’s event. There is a lot of it. Perhaps too much of it. I don’t have a problem with video art and have been a fan since the 1970s when it was kickstarted. I do have a problem with the bottlenecks of traffic which act as a barrier between the artist and the audience. Some installations like Laure Prouvost had a two and a half hour wait – good luck! Others were 120 minutes long. This is an impossibility if you don’t have a minimum of a week to visit the event. Personally, I think the Biennale needs a rethink and so do many of the artists. You have to realise the limitations of this type of event. Many of the makers are clueless. Suggestion, why not project videos on the outside of the pavilions with sound accessible on your smartphone. It would reach a larger audience. Please tell me these videos are going to be put up on YouTube or Vimo….. If not I will be skipping them.

My Picks: I’m going to leave the best for last as there were several pavilions of note 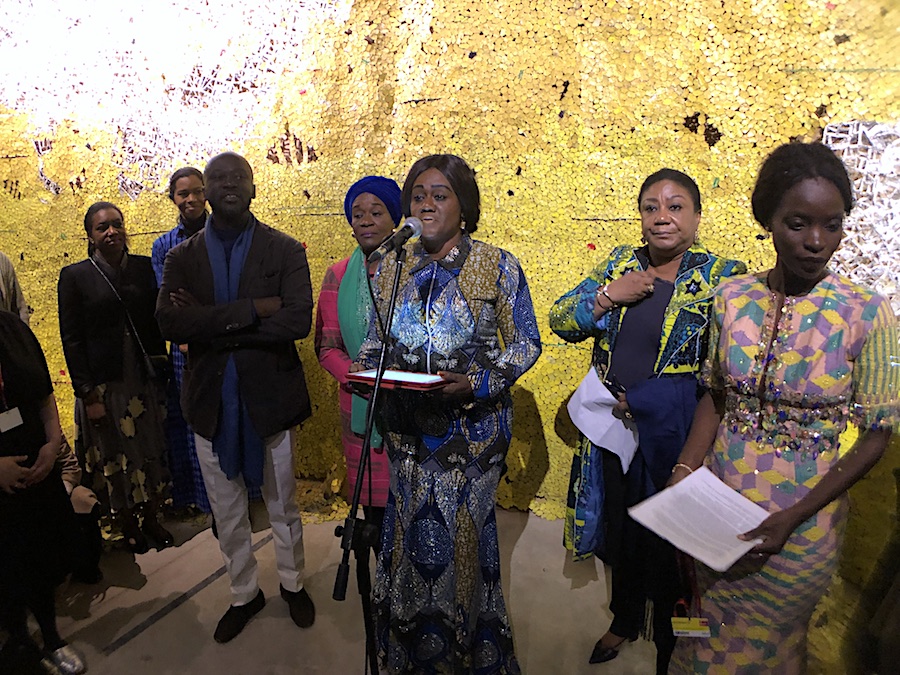 Ghana Pavilion
Ghana was my favourite it was housed in a space designed by Sir David Adjaye and includes new work by sculptor El Anatsui, video artist John Akomfrah, painter Lynette Yiadom-Boakye and Ibrahim Mahama. All created new work for the pavilion. 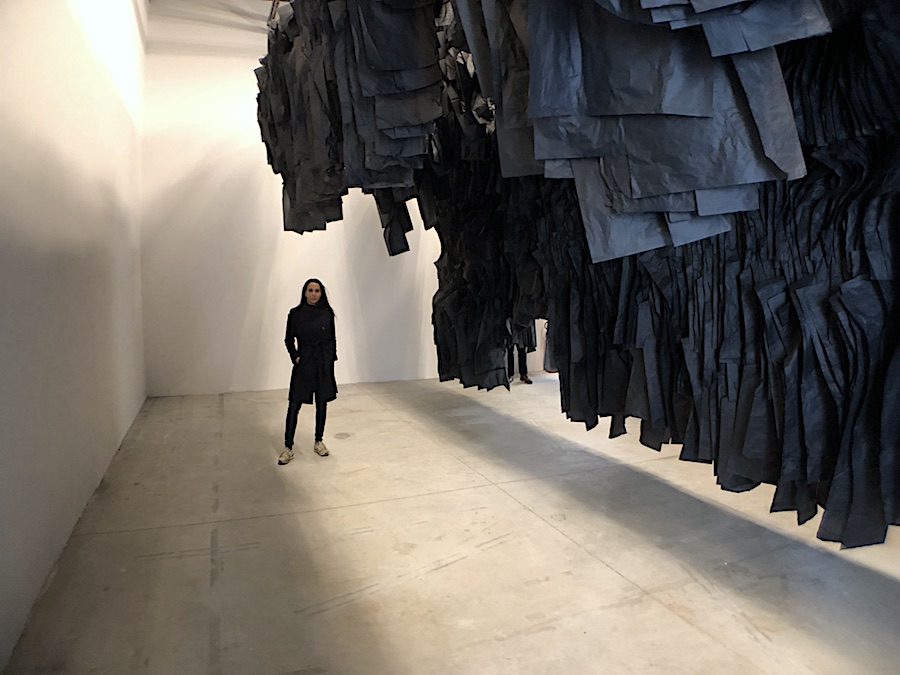 Madagascar Pavilion
Joël Andrianomearisoa was the artist chosen for the first Madagascar pavilion. He works with sinister and joyous affirmation creating an absorbing black space alongside curators Rina Ralay Ranaivo and Emmanuel Daydé. 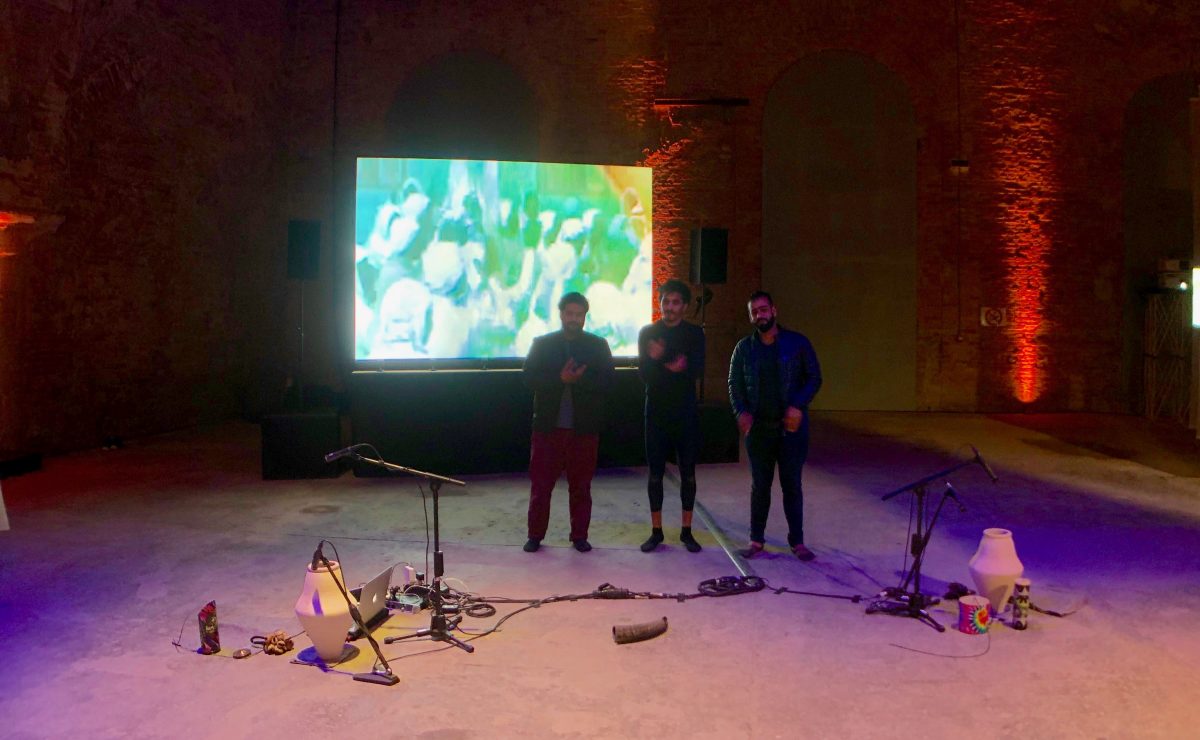 Bahrain Pavilion
Far from the madding crowd, across a small canal opposite the Arsenale Bahrain showcased five artists who filled the cavernous space with installation works of note. Curated by Amal Khalaf who has worked with the Serpentine Gallery in London and Kaneka Subberwal Art Bahrain Across Borders/ArtBAB and ArtSelect the exhibition was full of pleasant surprises. This was again a first for Bahrain in Venice. Artists included: Hala Kaiksow, Hasan Hujairi, Nasser Al Yousif, Ghada Khunji, Mariam Al Noaimi and Bahraini Danish. 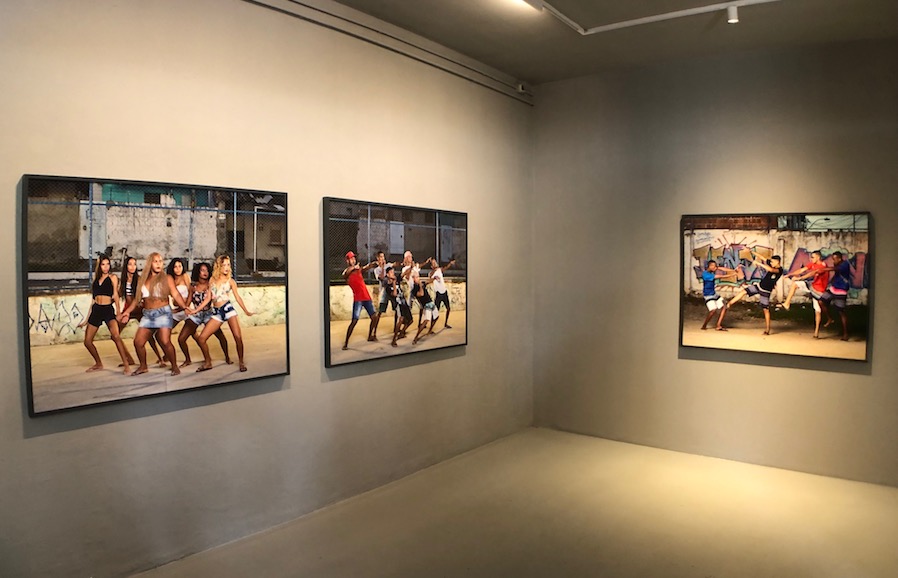 Brazil
The two rooms of the Brazilian Pavilion at the Giardini della Biennale in Venice transform into a large installation created around the film debuting at the event, Swinguerra. The most recent project of the artist duo Bárbara Wagner & Benjamin de Burca (Brasília, 1980 / Munich, 1975) was begun upon receiving an invitation from Gabriel Pérez-Barreiro, appointed as curator by the Fundação Bienal, to hold a solo show as the official representation of Brazil at the world’s oldest art biennial. The show consists of a two-channel video installation featuring the film commissioned for the occasion and, in the smaller room, a selection of portraits of the participants of the new work. The pavilion reflects in two different mediums, the same artwork. “Swingueira is a sort of updating of a set of traditions such as square dancing, the samba school and the trio elétrico [mobile sound systems], practiced autonomously and independently by youths who get together regularly in sports courts on the outskirts of Recife.” 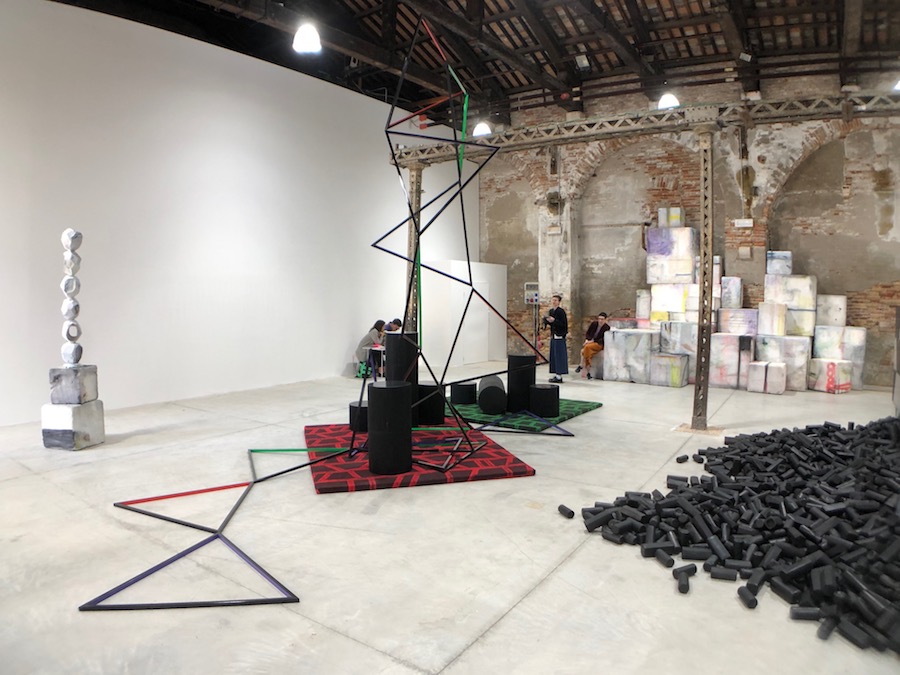 Irish artist Eva Rothschild has created an ambitious and immersive exhibition for the Irish Pavilion at the 58th International Art Exhibition – La Biennale di Venezia. Continuing her exploration of sculptural presence, Rothschild presents a physical environment which materially resonates with current political concerns and our ongoing sense of global uncertainty.

Curated by Mary Cremin, The Shrinking Universe consists of four works made up of multiple elements. Each sculpture retains its own distinct presence while forming a cohesive totality within the pavilion. The array of materials that Rothschild uses in her work, alongside the distinction between the presence of the artist’s hand and industrially-created works, brings about a tension between the monumental and the personal. 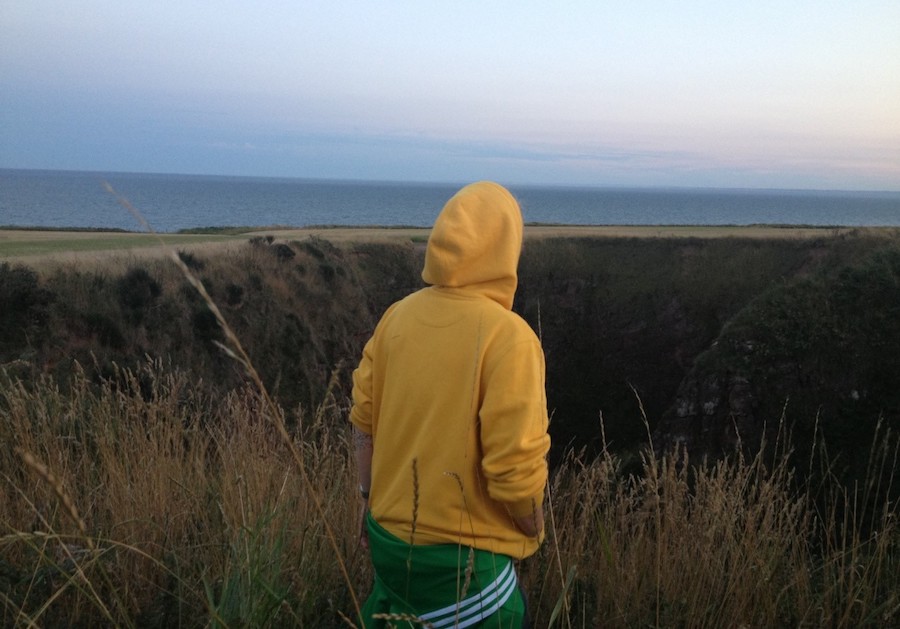 This commission – the artist’s most ambitious to date – is curated by Linsey Young with Cove Park and takes place from 11 May – 24 November 2019 at Arsenale Docks in the utilitarian workshop of a boatyard, repurposed for Prodger’s installation.

Much of Prodger’s work looks at subjectivity, self- determination and queerness. SaF05 is the last in a trilogy of videos that began with Stoneymollan Trail (2015) and was followed by BRIDGIT (2016). This autobiographical cycle traces the accumulation of affinities, desires and losses that form a self as it moves forward in time. SaF05 draws upon multiple sources – archival, scientific and diaristic – and combines footage from a number of geo-graphical locations (the Scottish Highlands, the Great Basin Desert, the Okavango Delta and the Ionian Islands).

Wales
Sean Edwards (b.1980) represents Wales in Venice 2019 with a solo exhibition presented by guest curator Marie-Anne McQuay and lead organisation T Pawb. Commissioned by Arts Council of Wales for one of the Collateral Event of the 58th International Art Exhibition – La Biennale di Venezia,

Edwards’ exhibition, a poetic inquiry into place, politics and class, intertwined with personal histories, is the artist’s first major presentation at an international biennale.

Known for his sculptural approach to the everyday, Edwards often begins with seemingly unrelated elements linked by autobiographical and cultural connections. These range from the 1970s shopping centre near the housing estate where he grew up to Springsteen’s album Nebraska, a Welsh quilting group, snooker, tabloid newspapers, and various found materials. Through investigative processes including time spent in local archives, museums and libraries, he gathers together images, stories, quotes, and clips. It is in the teasing out of these things in the studio, in isolating, abstracting, and bringing them together, that their political and formal resonance comes into play.