It was a relief to step away from the hustle and bustle of the Giardini and Arsenale, the main venues for the 58th Venice Biennale, to visit exhibitions elsewhere. There is less urgency to view everything, and you can take your time to look at the art properly. However, there are an enormous amount of collateral exhibitions, both official and unofficial to see. The joy is always visiting Palazzos and buildings not usually on the main tourist lists. This represents a mere fraction of the exhibitions in and around Venice during the Biennale.

Visitors to Edmund de Waal Psalm are encouraged to sit, read and contemplate

The first stop was to see Edmund de Waal’s two-part exhibition Psalm situated in the Ateneo Veneto and the Jewish Museum in the Ghetto. At the Ateneo Veneto, a 16th-century building that has been a meeting place for cultural debate in Venice for over two centuries, de Waal has created a library in a temporary pavilion holding almost 2000 books by exiled writers. The external walls are painted with liquid porcelain and gold leaf into which de Waal has inscribed the names of the lost libraries of the world. Alongside the bookshelves, there is a quartet of new vitrines containing porcelain vessels and page-like brackets of steel. Visitors are encouraged to sit, read and contemplate.
At the Jewish Museum in the Venetian Ghetto, de Waal has created works installed in the spaces around the Canton Scuola, a 16th-century synagogue on the top floors of the museum buildings undetectable from the outside. Ten recent works have been made in response to the Psalms and are on show in this extraordinary place. 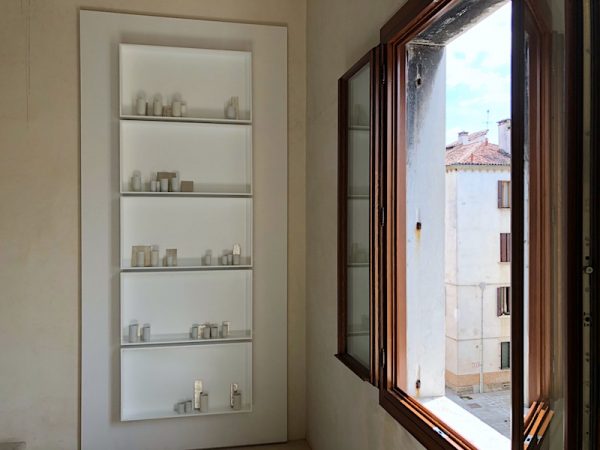 Hung on the threshold of the synagogue, seen through its windows, is Tehillim – a series of eleven vitrines holding thin sheets of gilded porcelain and blocks of translucent white marble. Another installation, Adonai, sits high on the walls of the staircase above. There are installations that recall particular poems, from Osip Mandelstam and Rilke, with words scribbled into pieces of porcelain, broken shards collected and held together. As part of the exhibition, de Waal has made a table for the seventeenth-century Jewish poet Sara Copio Sullam, who lived and wrote in the Ghetto, into which is inscribed the words of Psalm 137.

Above this room is the Sukkah. Sukkot, the Feast of the Tabernacles, commemorates the forty years of wandering in the desert, celebrated by taking shelter and eating meals in a sukkah or temporary structure, often set up in a garden. In this beautiful space de Waal has made an installation taking the name of this room, sukkah – a high table on which stands a group of free-standing vitrines sheltering porcelain vessels and leaning shims of gilded steel. These two installations were the highlight of the trip. The good news is that the library of exile will be shown at the British Museum in London in 2020 following Venice. 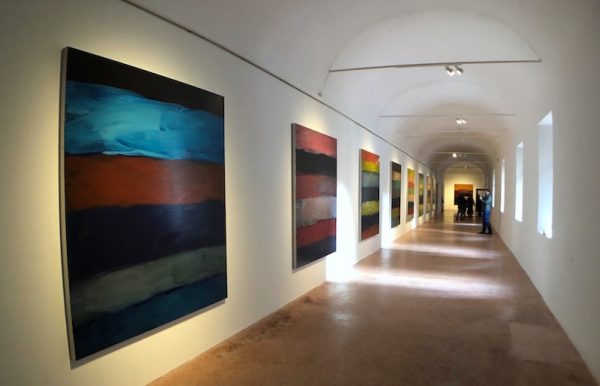 Sean Scully: Human takes place at Abbey San Giorgio Maggiore on an island across from the Doge’s Palace. Scully has created a series of new sculptures, paintings, drawings, and watercolour works directly inspired by the monks’ Abbey of San Giorgio Maggiore, their vast illuminated manuscript collections and the 16th-century Benedictine church. The soaring new sculpture, Opulent Ascension, is situated directly beneath the church’s central dome. It is constructed from stacked frames, each wrapped in vibrant and varying colours of felt and stands ten metres high. The tallest work ever created by the artist. It is also hollow and allows viewers to get inside, walk around and look up at the central dome. A vellum tome of watercolour drawings on hand-made paper, compiled by the artist for the exhibition is on display in the large choir behind the altar. Eight paintings from Scully’s acclaimed recent series Landline adorn the church’s long and narrow passageway and three figurative works from Scully’s Madonna series are in a separate room. An extensive, powerful exhibit. 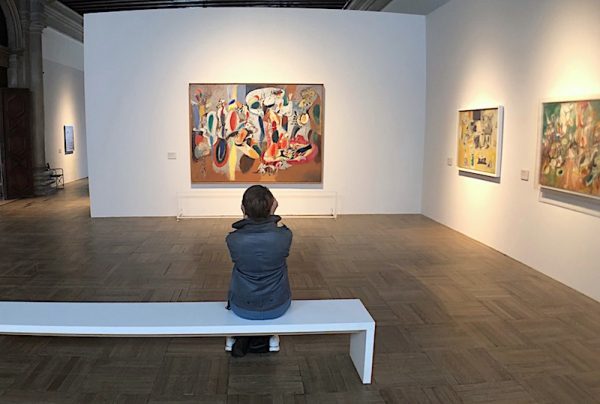 The Arshile Gorky exhibition at Ca’ Pesaro – International Gallery of Modern Art is the first exhibition in Italy of Gorky’s work. It brings together 80 works borrowed from major museums and private collections including the Tate, the Whitney Museum of American Art, the Albright-Knox Art Gallery, the Centre Pompidou and the National Gallery of Art in Washington. It concentrates on his earlier works where his style is reminiscent first of Cezanne then Picasso and finally Miro before finding his own individual pictorial language.

In another part of the Museum, there is an impressive display of works donated by the Carraro Foundation which includes 20th-century glass by Carlo Scarpa, Fulvio Bianconi and Archimede Seguso, furniture by Carlo Bugatti and a spectacular 1957 mural by Gino Severini. 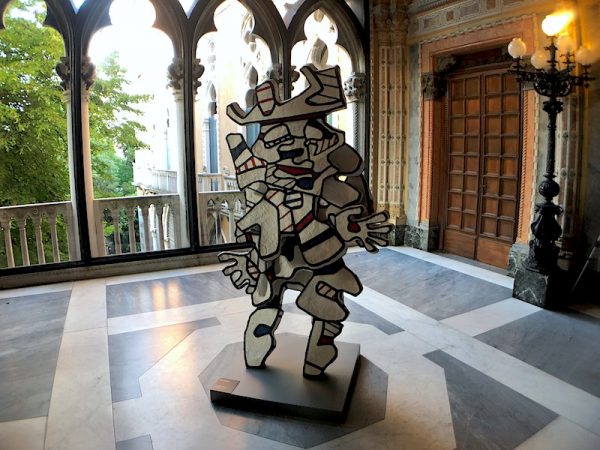 Jean Dubuffet and Venice at Palazzo Franchetti is worth a visit not only because of the exhibition but because the Palazzo is situated at the foot of the Accademia Bridge with a garden looking out to the Grand Canal. The show is a reminder of two great Dubuffet exhibitions that took place in Venice, one at Palazzo Grassi in 1964 and the other at the French Pavilion in 1984 and features works sculptures and paintings from three of Dubuffet’s most famous series the Célébration du sol, Hourloupe and Mires. 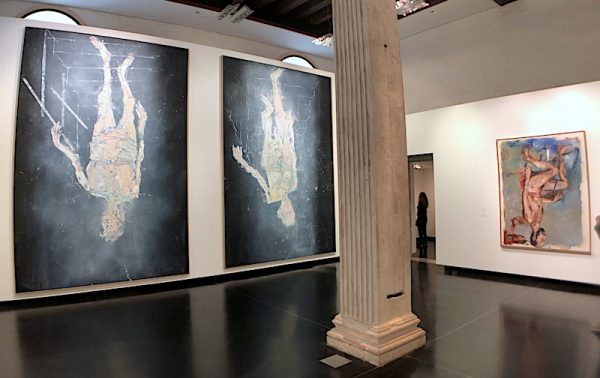 The Baselitz exhibition at the Gallerie dell’Accademia is unsettling. Seven rooms are dedicated to Baselitz’s paintings, drawings, prints, and sculptures. The show is divided into sections focusing on themes such as drawings inspired by Pontormo, the “upside-down” portraits, and the impressive large nudes. The room of nudes exhibits works that have never before been seen together. Some artists benefit from seeing lots of their works together, others by seeing works in isolation. Baselitz is one of the latter. Seeing so many of his upside paintings together made me think of the Edward Lear nonsense botany drawing Manypeeplia Upsidownia‎. 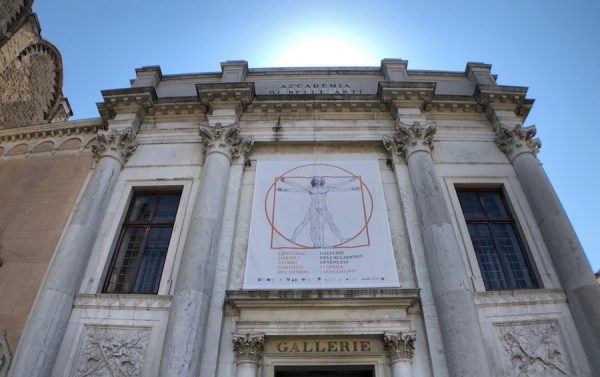 The Leonardo da Vinci exhibit also on at the Museum is well worth a visit. One of the many shows this year to mark the 500th anniversary of Leonardo’s death. On show is the extraordinary Vitruvian Man, studies for Battle of Anghiari and Sant’Anna with the Virgin and Child plus numerous studies of the human body, weapons, scientific research. The Museum’s collection includes the Hermit Saints Triptych by Hieronymus Bosch and several definitive Tintorettos. 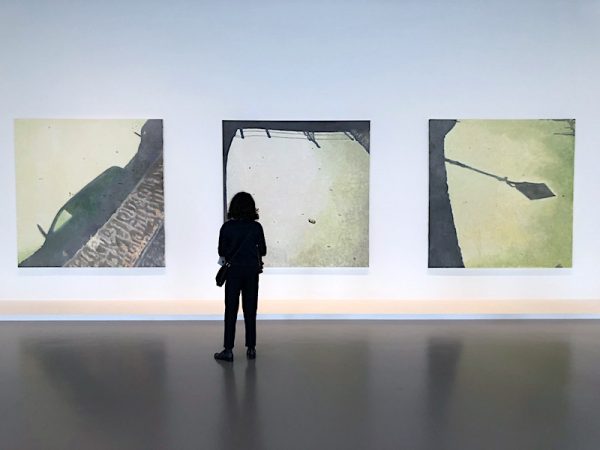 It was a welcome pleasure to return to the Palazzo Grassi and to see the atrium without Damien Hirst’s towering Demon with Bowl dominating the space. This year’s exhibition is Luc Tuymans’ first personal exhibition in Italy. Entitled ‘La Pelle’, after Curzio Malaparte’s 1949 novel, it includes over 80 works from the Pinault Collection, international museums and private collections, and focuses on the Tuymans paintings from 1986 to today.

His works deal with questions connected to the past and to more recent history and address subjects of our daily lives through a set of images borrowed from the private and public spheres – the press, television, the Internet. The artist renders these images by dissolving them in an unusual and rarefied light; the slight anxiety that emanates from them can trigger – according to the artist himself – an ‘authentic forgery’ of reality. The paintings are mostly in muted colours. 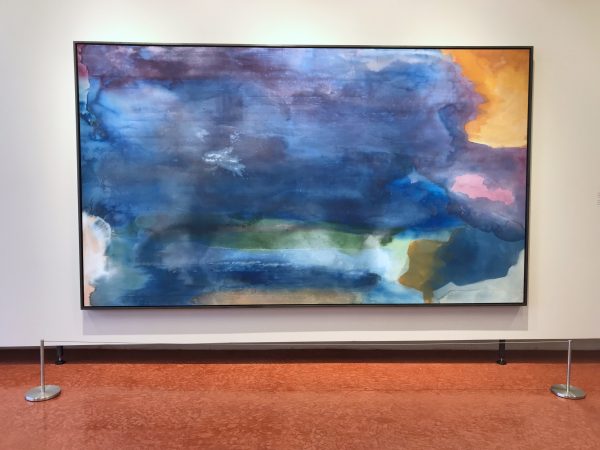 Other small exhibitions worth a mention that continue the feeling of calm away from the Biennale’s main venues are Martin Brown’s unpopulated paintings of Venetian views at the Sculoa Internazionale di Grafica; Frank Auerbach drawings at Alma Zevi Gallery and Miniscule at Fondamenta Sant’Anna. 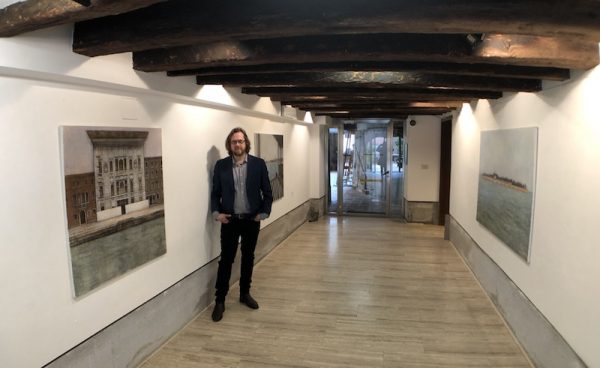 Martin Brown’s paintings deal primarily with the built environment, especially urban spaces. Australian-born Brown draws on the history of painting in the Western tradition to explore ideas of memory and perception as they relate to the architecture and topography of modern cities. Venezia/Veduta/Contemporanea presents a series of paintings that are a contemporary commentary on the historical painting style ‘veduta’, through depictions of Venice that comment directly on the history of painting referencing John Ruskin’s drawings and paintings in particular. They are finely crafted, with meticulous draughtsmanship and handling of paint. 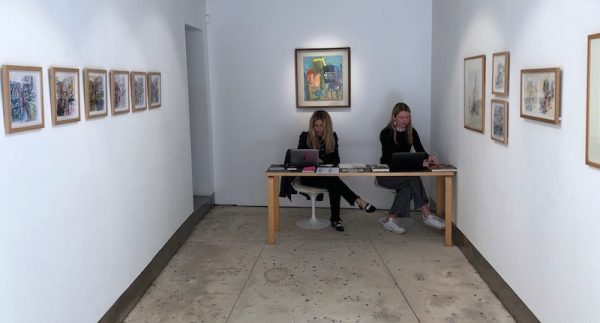 Frank Auerbach at Alma Zevi is his first show in Venice since representing Great Britain and winning the Golden Lion at the 1986 Venice Biennale. It features 10 small recent drawings by the 88-year-old artist of the area near his studio in Mornington Crescent, London with his characteristic scribbles in crayon, felt-tip pen, graphite and ink. 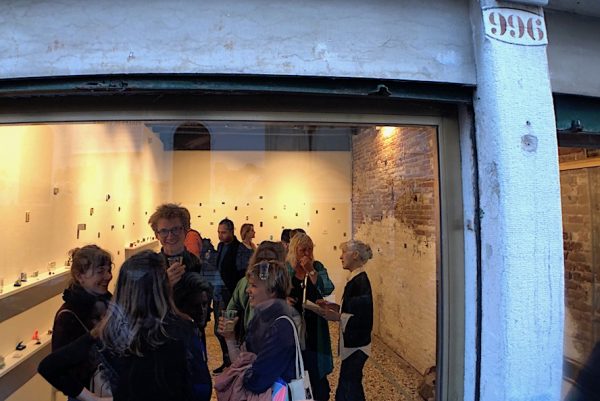 Miniscule Venice Curated and devised by artist Vanya Balogh in Association with Cross Lane Projects could be regarded as a bijou sociological experiment with over 100 international artists taking up the invitation to create and exhibit a diminutive art object of any genre or media, but with a simple proviso: maximum size of the work is that of a standard matchbox. The variety of subjects, techniques and materials used results in a set of carefully considered, ingenious but seriously tiny, fragile artworks. Most of the works are handmade often with the aid of a magnifying glass. The works are displayed either on two shelves the length of the small gallery space or on the walls with enough space around each work to separate one from another. An antidote to the oversized, noisy works in the national pavilions.