On one of the coldest days this year I climbed down many steps into the deep railway cut that is Glasgow’s Queens Park Station. Here, next to a tiny ticket office, is perhaps one of the UK’s strangest galleries. After six years and 30 projects, it is exhibiting a sea of 100 visual artists/musicians including 5 Turner prize winners in its small listed building on an island platform which copes with almost 3/4 million commuters a year.

“Music is on a very tight generational spectrum You want a different tribe, your own tribe” – Richard Strange 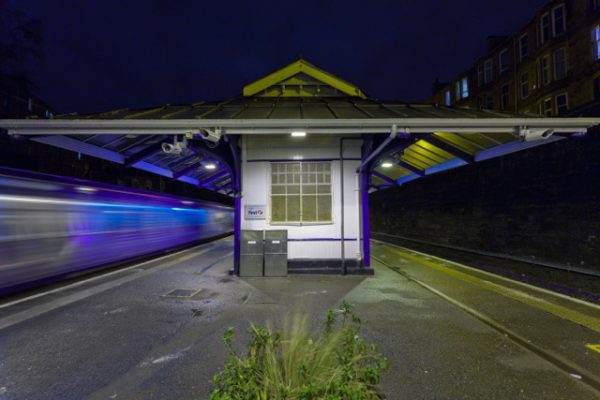 The theme of the show is music and includes both visual artists who make music & vice versa. How does moving between image and sound work? As someone less immersed in gigs and bands, I didn’t expect to find the show so enthralling, but the eclectic array of graphics, guitars, drawings, photographs, sculptures, photographs, flyers, film, posters, even T-shirts, is impressive.

Gallerists, Ellis Luxemburgh and Patrick Jameson, invited Glasgow School of Art lecturer, Ross Sinclair to make a show. He decided to celebrate by inviting friends and students. Sinclair is well placed to do this, as he was the original drummer in the 1987 alternative rock band, The Soup Dragons.

He got rather more than he bargained for. Work pouring in nonstop. Newly arrived small sketches by David Shrigley still litter the tabletop. Shrigley’s larger, dramatic, and very solid wooden and black foam production process blanks from his Problem Guitar series hang nearby, as enigmatic as some of his famous linear wit.

Well installed, the resulting totality (two wee rooms with lots of windows, not an easy hang) has all the impact of a junk shop where you dig and delve, sure to find treasures. And of course, you do. 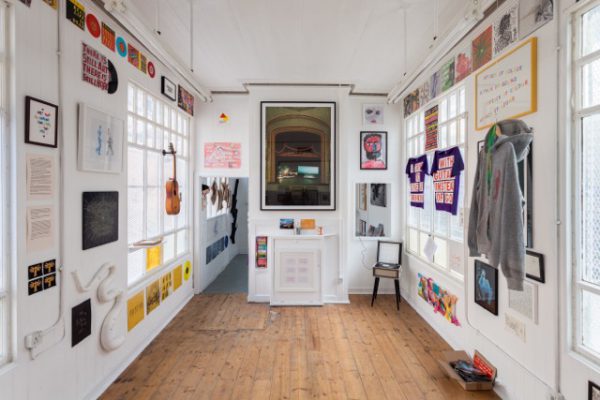 Every inch is covered with intriguing creations, from ceramic drums, or Icelandic artist Baldvin Ringsted’s plate Airguitar, via bright lemon discs to surreal sculptures from Tim Sandys. Novelties abound. A curious white serpent-instrument 3D printed in plastic from Zexuan Qiao (it actually plays I’m told!) hangs near Eugene Kelly’s clever self-portrait with iron filings and magnet, while David Mackintosh’s floor Log tries to trip you up. A relief to come across a direct drawing of bandsmen by Roderick Buchan, and lush oil painting from Victoria Morton.

This packed floor to ceiling Salon-style installation is helped by an excellent catalogue with wall-by-wall numbered graphics, (a mere 21 items on one side; 23 at the end wall.) Ages vary, but the real focus is Sinclair’s generation. Born between 1965-70, and with most studying at Glasgow School of Art in the late 1980s, early 90s, their tight-knit camaraderie has helped place the city at the epicentre of both contemporary art and music. 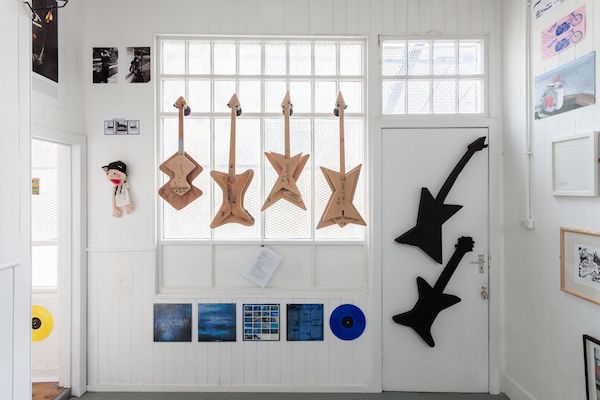 Yet, as Richard Strange of Doctors of Madness fame recently pointed out, “Music is on a very tight generational spectrum. No-one wants the same sound as your elder bothers and sisters. You want a different tribe, your own tribe.” For him 40 years ago this meant ‘pre-punk, post-glam.’ So Martin Boyce’s metal four letter tribute to the Fall’s Mark E Smith is heartfelt but may be lost on younger folk. Boyce, who won the Turner in 2011, also shows two homemade record sleeves for New Order from 1982 – when he was 15.

Sinclair himself has a 25-year project, Real Life, initiated in 1994 when he had the words ‘Real Life’ tattooed on his back. It involves music, performance, exhibitions, public art and publication. Many colourful albums & posters are on display here, and he has recently turned the Real Life project into a PhD.

Sinclair is keen to address the issue of interconnectedness. How does moving between his two passions, image and sound, work? How does the approach to their making differ? Sinclair believes fervidly in both art and in music – that together they can “save your life, even change the world.” 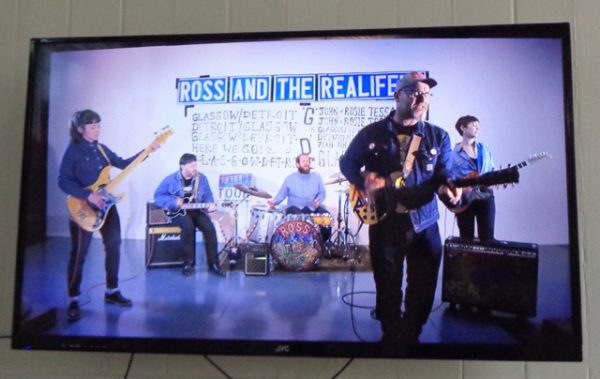 Ross And The RealLifers  Visual Artists/Musicians

There are some generous touches. The 1980s band, Orange Juice, features here in the form of the actual 4 litho plates which were used to print the covers way back. Bob Hardy, (guitarist with rock band, Franz Ferdinand) contributes postcard photos of every hotel room he’s stayed in a while touring since 2004, all free to pick up and take away – a nice concept.

The sound side of things is cleverly handled via a monitor in the entrance playing several videos including dramatic digital imagery from Edinburgh based electronic band Finiflex. Sinclair himself is also shown performing with his Real Life Band in 2015. 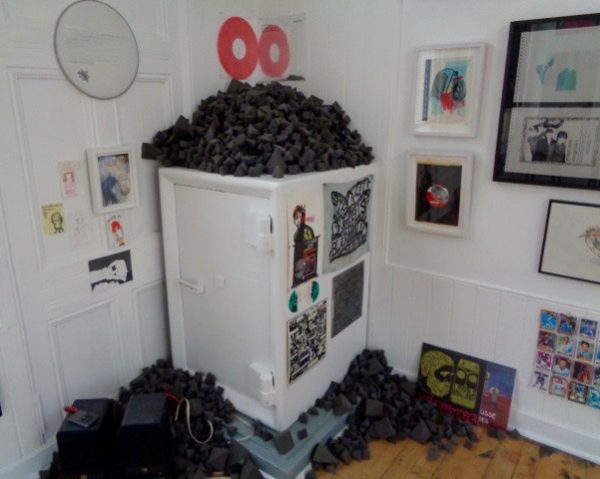 Safe and Coals” by Kordecki

But for me the main impact is visual. The big names inevitably have the bigger spaces: Simon Starling’s monochromatic photographic record of the pianola recently used at Abbey Road Studios for a John Cage piece, Douglas Gordon’s C-print of his burnt piano event at Newcastle’s Opera House and Nathan Coley’s poster size lettering panel where overlapping dots spell out the almost illegible lyrics of the Talking Heads song, ‘Heaven – is a Place where Nothing Ever Happens’. These are key pieces in this show. The gallery has an extensive archive website, proving that this old station waiting room, despite its 2 huge, permanent Victorian safes, (part of the listed building and currently piled with what looks like coal, actually acoustic foam used in recording studios, courtesy of recent graduate Krysia Kordecki) can also provide a minimal setting for performance.

With its high profile contributors, this exhibition will give a boost to the Queens Park Railway Club – tho why it’s called a Club I still do not know!