A recent foray into Milan led me to two galleries, both focusing on women’s work. The Pool New York is a relatively new and beautiful gallery space in the city’s financial district. Eteri Chkadua’s first solo show in Milan titled, Guamarjos, translates to the traditional “Cheers’ in the Georgian language. 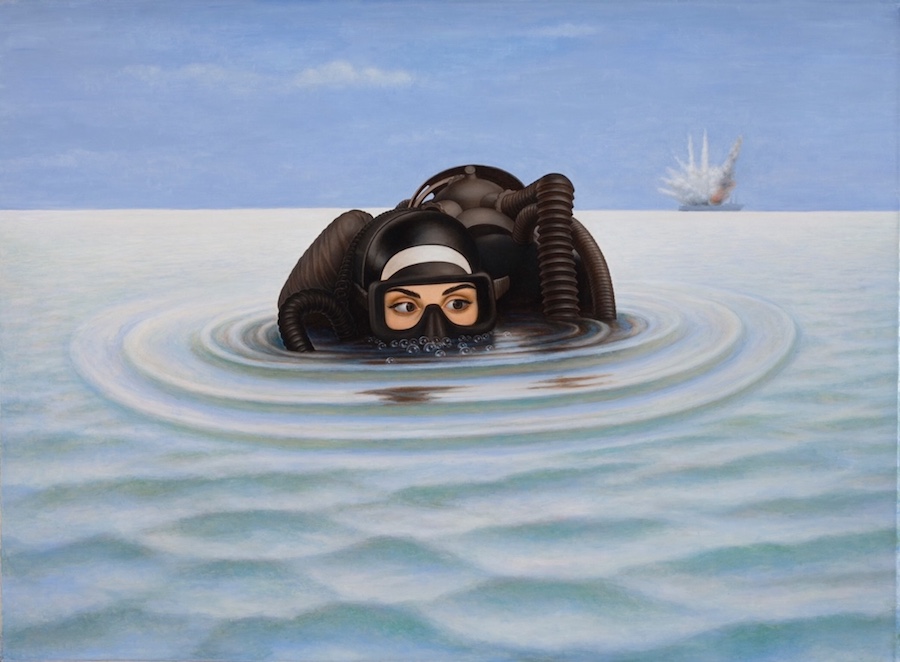 The artist began her career as an abstractionist. “Just for fun,” she began working in a Flemish-inspired figurative style. Thus, she places herself at a feast with delicacies like sweets, dumplings and khachapurl, the Georgian cheese bread, while a machine gun is casually slung on the same white-clothed table. “Diver” portrays the ebony eyed artist in full diving gear, floating in an aquamarine sea as a ship explodes in the distant horizon. “Unfaithful Wife,” one of the most popular and reproduced images used in Venice for the 2007 Biennial, portrays the artist riding backwards on a zebra, which was once a traditional punishment for an unfaithful wife. Here, the “wife” is garbed in contemporary wear, and the mule or horse that would run the woman out of town is transformed into an exotic zebra.

The crouching figure on a tropical background, delicate leaves beneath her, might, in fact, be a “Maniac”, as the intense glare of the female profile, with hands clenched like paws, reveals pent-up powers.
Eteri’s meticulous skills render imaginative and personal imagery with a depth and seriousness resulting from her highly honed technical skills. Magic realism, feminism, and always hip humour adds depth to work that dazzles with cosmopolitan originality. “Gaumarjos” provides a perfect introduction to the bold and provocative work of Eteri Chkadua, an artist of passionate and poetic precision.

“We have ninety percent male artists, and it was becoming a problem. We wanted to show an alternative, and demonstrate that along with older great women artists, there’s a new generation of exciting women artists in Italy,” the lovely Sara Wunderli, a gallery at Giovanni Bonelli explained.

This exquisitely curated show creates a dialogue between intergenerational artists who explore sexuality, traditional women’s crafts and maintain a feminist viewpoint. Carol Rama, one of the great post-WWII artists, was a fundamental figure in the Italian Abstractionist and Arte Povera movements. Born in 1918, the self-taught artist has long been a cult heroine, and her recent 2017 show at New York’s New Museum was a huge hit. The work at Bonelli represents her iconic visual vocabulary, using tire treads, shoes, and a returning theme of erotic imagery. “Senza Titolo(Seduzione)”, two weirdly sexual drawings have much in common with Elena Monza’s garter belted and rouge nippled figures. 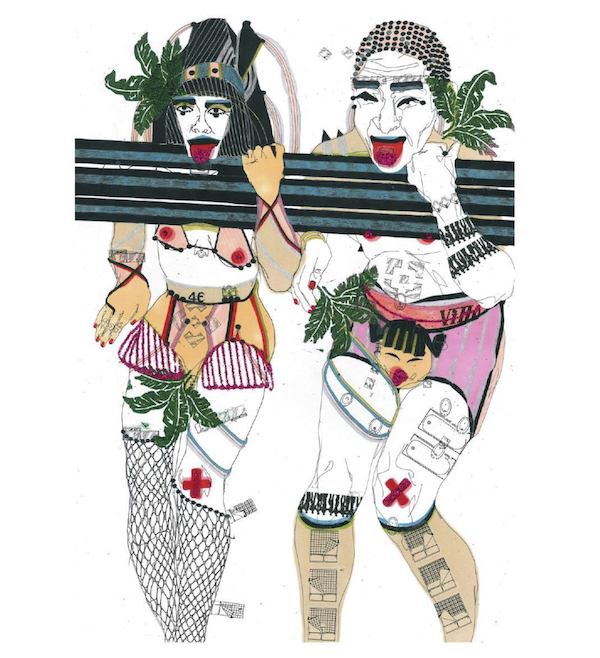 Monzo’s work centres upon female figuration, with a sensuality that roams from sweet to sinister.”To be part of this group show is a great opportunity for me, to be shown with artists that I have always esteemed. Carol Rama, in particular, has always inspired me with her imagination and symbols of sexuality.” said the well-traveled Monzo, who has worked in Beirut, Lebanon, Japan, New York and Shanghai.

Like Rama, Monzo also uses runny swathes of crimson and pink, almost blood stains seeping into paper. Both artists also sometimes depict females with outstretched tongues – a gesture that is subversive and seductive. Monza’s bare-breasted , fishnet-stockinged women are the boldly faced progeny of Rama’s sandaled and sexualised nudes. Echoes of Egon Schiele’s sketchy unswerving lines can be seen in Monzo’s graceful
mastery. The gender fluidity of “Just Married” (2016) echoes Rama’s earlier and prescient imagery, and traces of Monzo’s travels can be seen in Japanese iconography and shamanic headgear. ”McDonald’s” (2016) depicts a trio of psychedelic statuary, schoolgirl to an androgynous obsidian diety, united by a figure with arms opened in an amorphous benediction. A floating hamburger can be seen as a carnivorous tiara.
Italian born Michaela Martello lives and works in New York City, and is a multidisciplinary artist whose stitched fabric collaged works echoes the aesthetics of Maria Lai, a Sardinian artist known for her radical use of embroidery. Lai’s works use a limited palette and basic stitching that reflect her childhood ash tracings. 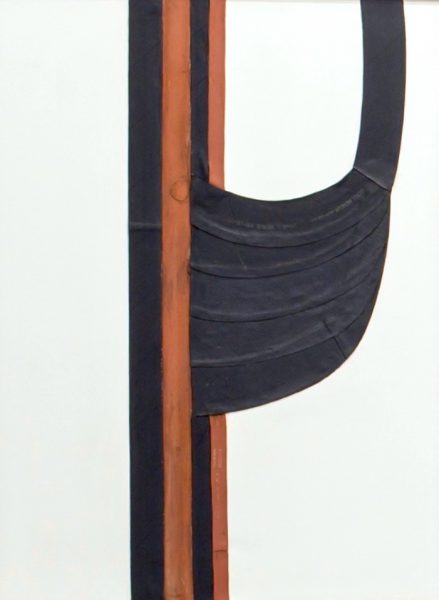 Martello also makes ceramic figurines, that are both pretty and provocative. Her ebony skinned Kali is in Regency dress, except a tiger rather then lace adorns her petticoated gown. “Orilirio” (2018)is a stitched bouquet of multi-coloured eyes upon a vintage Army blanket.

Carla Accardi, another influential post War artist, was one of the founders of a Marxist and formalist collective, Gruppo Forma 1, begun in 1947. Her bold abstractions are a hybridisation of geometric and gestural painting. The saturated colour work shown here represents early Italian artistic feminism, and the powerful palette helps unite the show.

Elena Monzo and Michela Martello are two young practising artists who brilliantly reflect their illustrious predecessors, whose fame and recognition was long overdue. Bonelli’s thoughtful and meticulous curation highlights the work of revered women pioneers along with their contemporary sisters of whom they would be proud.