Yorkshire Sculpture Park is open again for business, and it is so good to revisit it. The great news is many of its temporary shows have been extended, like Joana Vasconcelos’ Beyond (till January 2022).

Recently the stunning ‘399 Days’, by Rachel Kneebone, once at the V&A but now on display in the 18th-century chapel at YSP, was reviewed for Artlyst by Revd Jonathan Evens, and you can read that here.

You really do feel that you are surrounded by nature – JP

YSP is a unique place to visit, with 500 acres and about 100 sculptures in formal gardens, parkland, woods and around two lakes.

The main reason for going was to see “Silence – Alone in a World of Wounds” by artists Heather Peak and Ivan Morison, which responds to the question “Can art save us from extinction?” – well, probably not, but it can certainly highlight environmental issues. 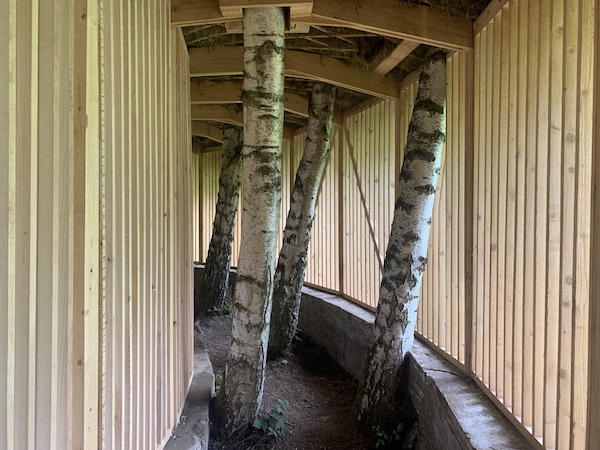 Continuing a tradition of those Land Artists, the duo Peak and Morison have developed a tranquil meditative sculptural space designed to fit in with the environment, but importantly, not to change it.

You enter ‘Silence’ through a circular space into an extended open pavilion, which has been created with thatch, paper, mud, rocks and other materials sourced from within the West Bretton estate at YSP and sustainably sourced timber from the artists’ own woodland. Birds have already started nesting in it, there are rips in the paper, and nature is doing its job. It will eventually decay and disappear at its own pace. This is the point.

Their sculpture at YSP is one of several ‘interventions’ that Peak and Morison have created since they formed their working partnership in 2003. Works that “transcend the division of art, architecture, and theatre”. Most recently, they produced ‘Mother’, an enormous thatched hideaway in the Cambridgeshire countryside, disguised as a haystack.

Clare Lilley, Director of Programme at Yorkshire Sculpture Park, describes ‘Silence’ as: “an exceptional sculpture, forged from earth, timber, paper and living trees. Holding light, space and stillness, it will be a place of peace, an oasis of calm in which people will be inspired, moved and rejuvenated”.

They ask that you observe silence, stop and connect with the space around you, and that’s not too hard, as it is a bit of a trek and very isolated – even within the park. You really do feel that you are surrounded by nature, and somehow part of it, as all you hear is the rustling of trees and the occasional bird.

Like a lot of land art, it will change as the environment around it changes. And eventually, ‘Silence’ will become part of the landscape around it. Leaving nothing more than a trace in years to come. If that.

It will be exciting to see it again as it starts to integrate more with the scenery, and I am already planning another visit. 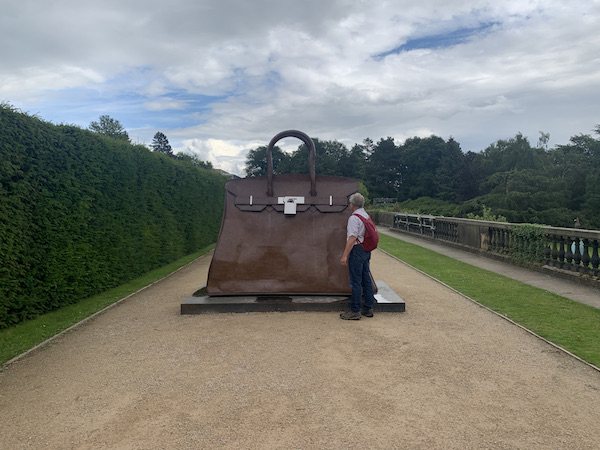 On a completely different note, the YSP is also presenting the UK’s largest ever exhibition by Portuguese artist Joana Vasconcelos. An exhibition which is both outside in the park and in the vast ‘Underground gallery’. Unlike ‘Silence’, nothing about Vasconcelos’ work is subtle. Nothing is designed to blend in with its surroundings!

Her massive cockerel (Pop Galo, 2016), which you see as you enter the park, apparently lights up and makes noise.

Her work- and her ideas – are HUGE. She uses everyday objects, like pots and pans and car wheel hubs, whisky glasses and ceramic tiles, to create bright monumental sculptures that can’t be missed. I mean… quite literally CAN’T BE MISSED!

Outside the gallery, a massive bronze Hermes Handbag by Kalliopi Lemos welcomes you, and inside the gallery, Vasconcelos’ “Marilyn” (2009/2011), is a pair of giant stilettos made from stainless steel pans. Like much of Vasconcelos’ work, it investigates ‘pop’ cultural references from a feminist viewpoint.

‘Red Independent Heart #3’ (2013) is a giant three metres high heart, made entirely of plastic cutlery (takes you a while to realise), which slowly rotates to doleful Fado music. The use of the everyday object is designed to make you question materiality.

An enormous James Bond-esque Beretta pistol consists of 168 rotary-dial telephones, and just outside we find ‘Solitário’ (2018), a 7metre high wedding ring is made out of gold-alloy car wheel rims, topped off with a stack of whisky glasses shaped like a diamond.

As I said, her work is not subtle, but it works so well at the YSP. Dynamic and playful with a serious edge.

After such an overdose of colour, noise, and material, I headed for James Turrell’s beautiful (and permanent) work, ‘Skyspace’, created out of an existing 18th-century deer shelter, where you sit (on heated benches for those Yorkshire winters!) against a concrete wall and look up at the sky through a rectangle cut in the roof.

My day started with quiet contemplation, and that’s how it ends. Thoughts of ‘Silence’, Elizabeth Frink, Henry Moore, 399 Days, Ai WeiWei and all the other works I saw today at YSP drift in and out, like the clouds in the patch of sky I’m looking up at.

Joana Vasconcelos: Beyond until 9 January 2022