Jeremy Deller the Turner Prize-winning artist has unveiled the design for his 38ft (11.5m) memorial to mark the 200th anniversary of the Peterloo Massacre.

“It’s a monument that’s for the public to inhabit. One to hang around on and assemble at.” – Jeremy Deller

The circular monument costing £1m will commemorate the victims of the infamous killing in Manchester. The atrocity took place on 16 August 1819 killing at least 11 and injuring 400. The memorial will be built at the junction of Lower Mosley Street and Windmill Street, near the city’s town hall and library. 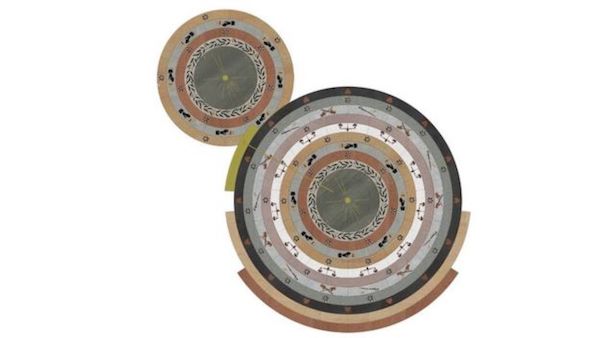 The artist added, “It is not something to be looked at and not touched – it is something to be on. “People can meet friends or have their lunch there and learn about Peterloo. “It is a monument to those who strove for democracy and our working class history. “Manchester’s history is about change, radicalism and the people doing something – it is more egalitarian.”

The steps of the sculpture will feature the names of those who were killed as well as the towns and villages where they walked from such as Wigan, Rochdale, Saddleworth and Altrincham. A new Mike Leigh film starring Maxine Peake about the massacre opens at cinemas this week. The man who ordered a massacre Peterloo has received positive reviews.

Peterloo is a landmark event in the history of British and international democracy. The people of Greater Manchester deserve a democratic say in the design, location and construction of the memorial, with extensive public consultation and input from inception to completion.

The memorial location is both prominent and public, on a site of historical significance for the massacre. It will be of comparable size and quality of materials to other major city centre monuments, with a respectful space around it for people to gather in contemplation or commemoration.

The memorial will be an object of civic pride which resonates with the people of Manchester and which expresses the spirit of democracy, economic justice and human rights.